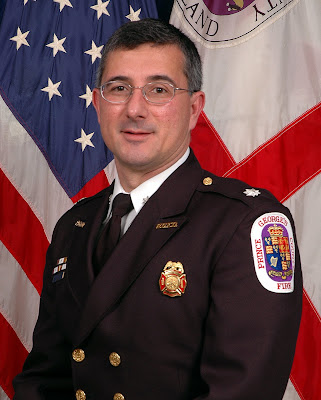 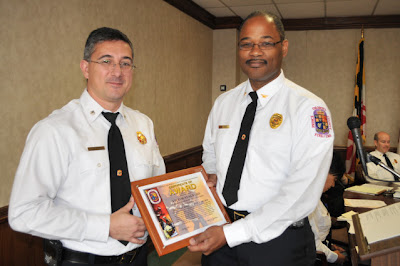 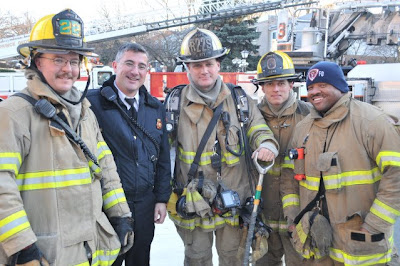 A consummate professional will soon be leaving the ranks of the Prince George’s County Fire/Emergency Medical Services (EMS) Department. The retirement announcement of Lieutenant Colonel Victor Stagnaro was made by Fire Chief Eugene A. Jones on Monday evening, January 25, 2010. Fire Chief Jones stated, “Deputy Fire Chief Stagnaro had had a stellar career with the Fire/EMS Department and has served the citizens and the men and women of our Department with the utmost professionalism. He has indicated his intention to retire and I wish him well.”

Throughout his 24-year career, Stagnaro has placed his work ethics and values on family, honesty and integrity. Many within the Department describe him as being mild-mannered and a calming force in the face of emergencies and diversity. He is known as being a tremendous leader. Stagnaro has received numerous awards and commendations during his tenure including receiving a Distinguished Service Award in November 2009, a Unit Citation for his work on the DC Serial Arsonist Case, and the Apartment and Office Buildings Association (AOBA) Annual Award.

During his 24 years with the Prince George’s County Fire/EMS Department Victor Stagnaro has served in numerous Fire/EMS Stations; serving as a firefighter and fire officer at: Beltsville, Laurel, Branchville, Calverton, Chillum and Hyattsville. As he progressed through the leadership ranks he also served as an instructor at the training academy and as the Department’s Public Information Officer. He commanded multiple Fire/EMS Stations while serving as a Battalion Officer and as a Major, he served as the Executive Officer to the Fire Chief and then went on to command Fire Prevention/Investigations and Advanced Emergency Medical Services.

Before taking over as the Emergency Operations Command, Stagnaro was appointed in October 2008 to serve as the Deputy Fire Chief responsible for the Fire/EMS Department’s Operations Center, Logistics and Supply, Administrative Compliance, Apparatus Maintenance and the Training Academy. His most recent assignment was that of Emergency Operations Commander (EOC). The Emergency Operations Command includes: Fire/Rescue Operations, Advanced Emergency Medical Services, Operational Safety, and Quality Assurance. These elements provide emergency fire and rescue services and basic ambulance services, the advanced life support and specialized fire and rescue functions, including high-rise, confined space, and underwater rescue. In addition, Quality Assurance focuses on monitoring, evaluating and adjusting the level of emergency and non-emergency service that is provided to our citizens through training and discipline. He is credited with helping to reduce the amount of overtime paid on a daily basis to record lows.

Lieutenant Colonel Victor Stagnaro was the highest ranking member with a Hispanic origin within the ranks of the Fire/EMS Department. He will take some well-deserved leave until his final day with the Department in mid-February. Victor Stagnaro has been married for 26 years and is the father of 7 children, ranging in age from 12 to 25, and resides with his wife in the Annapolis area.

In an interview held last year, when asked what his most rewarding memory of his career was, Stagnaro responded, “I really feel that most everyday is rewarding. Of course, I don’t love every bit of every day. But by and large, everyday is rewarding or has the potential to be rewarding. I do miss the opportunities to get on a fire truck or ambulance and actually interact with the citizens that we are helping, but I learned at some point that, the Department can do so much more in protecting lives and property by developing good policies.

I have been involved with doing CPR on folks that survived and I have put out fires or have been part of a team that put out fires. It is rewarding to know that at least some of their belongings were saved. Those events are always rewarding.

However, over the past several years I was able to work with the Apartment and Office Building Association in placing battery back up smoke alarms in the majority of all apartments in the County that was a far reaching policy that has the potential to save an untold number of lives. I was also involved with placing more EMS Supervisors with Advanced Life Support skills in cars, making them more mobile and coordinating ALS services in the field, those two changes come to mind as some of the most rewarding because its affects can be so far reaching and the lives and property that are saved may never be known. Though I am not actually touching patients and putting out fires I know that lives are saved and property is protected because of a change of policy with which I was involved.”
Posted by PGFD at 3:20 PM 1 comment: Links to this post