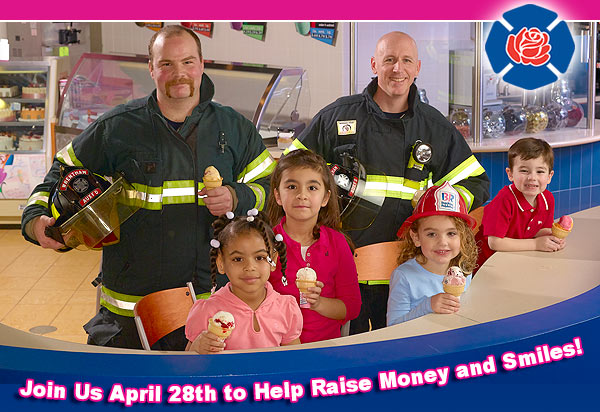 Baskin-Robbins® and the National Fallen Firefighters Foundation (NFFF) are again partnering to create an event to benefit local fire service organizations nationwide.
On Wednesday, April 28, 2010, Baskin-Robbins® stores across the country will hold 31 Cent Scoop Night from 5 - 10pm to show their commitment to the firefighting community. The Baskin-Robbins Community Foundation is making a $100,000 donation to the NFFF to honor America's firefighters and Baskin-Robbins® shops will reduce the price of small scoops to 31 cents. The event also creates an opportunity for customers to donate to local fire charities in their neighborhoods - and that is where you come in!
Please help make the night a success -
get involved in 31 Cent Scoop Night !
For More Information Visit www.BaskinRobbins.com/firefighters
or E-mail baskinrobbins@schneiderpr.com
Posted by PGFD at 3:15 PM No comments: Links to this post

NIOSH REPORT ON FORESTVILLE STRIP MALL EXPLOSION - MAY 2009
On May 7, 2009, two captains, a lieutenant, and five fire fighters were injured during a natural gas explosion at a strip mall in Maryland. At 1254 hours, dispatch reported a natural gas leak inside a business at a strip mall. Five minutes later, the initial responding crew and the incident commander (IC) arrived on scene to find a gas company employee looking for an underground gas leak. Approximately 6 minutes later, a natural gas leak was found near the exterior rear corner of the structure. After 23 minutes on scene, approximately 45 civilians were evacuated from 7 occupied businesses.

An uninjured captain issued a Mayday, followed by the IC ordering evacuation tones and a personnel accountability report. Crews began to look for the captain who was blown out the rear doorway. He had walked around the side to the front of the structure, and radioed his location to command. Fire fighters began moving injured personnel to ambulances staged in the front parking lot. Eight fire fighters and a gas company employee were transported to local hospitals. The injuries ranged from third degree burns to an ankle sprain.


The National Institute for Occupational Safety and Health (NIOSH), an institute within the Centers for Disease Control and Prevention (CDC), is the federal agency responsible for conducting research and making recommendations for the prevention of work-related injury and illness. In fiscal year 1998, the Congress appropriated funds to NIOSH to conduct a fire fighter initiative. NIOSH initiated the Fire Fighter Fatality Investigation and Prevention Program to examine deaths of fire fighters in the line of duty so that fire departments, fire fighters, fire service organizations, safety experts and researchers could learn from these incidents. The primary goal of these investigations is for NIOSH to make recommendations to prevent similar occurrences. These NIOSH investigations are intended to reduce or prevent future fire fighter deaths and are completely separate from the rulemaking, enforcement and inspection activities of any other federal or state agency. Under its program, NIOSH investigators interview persons with knowledge of the incident and review available records to develop a description of the conditions and circumstances leading to the deaths in order to provide a context for the agency’s recommendations. The NIOSH summary of these conditions and circumstances in its reports is not intended as a legal statement of facts. This summary, as well as the conclusions and recommendations made by NIOSH, should not be used for the purpose of litigation or the adjudication of any claim. For further information, visit the program website at www.cdc.gov/niosh/fire or call toll free 1-800-CDC-INFO (1-800-232-4636).
Prince George's County Fire Chief Eugene A. Jones thanks NIOSH and their investigators for their work in compiling this fact finding report.  He stated, "The NIOSH report has highlighted areas of improvement that will be addressed within my Department.  I hope that other Fire Departments take the time to study the report and use the recommendations to avoid injuires or line of duty deaths."

Fire Chief Jones is requiring the volunteer and career membership to read the report and commence drills on their findings.  He has also asked his command staff to review the recommendations and provide direction for compliance.

Read NIOSH Report Here.
Posted by PGFD at 1:07 PM No comments: Links to this post