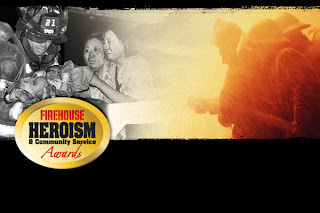 The upcoming, April 2012, issue of FIREHOUSE MAGAZINE includes the 2011 Heroism and Community Service Awards.  Numerous Prince George's County Career and Volunteer Firefighters are recognized in three categories; Heroism, Community Service and Unit Citations.  Click here to view the article.
Posted by PGFD at 10:13 PM No comments: Links to this post

MEDIA CONTACT: Mark E. Brady, Chief Spokesperson, 240-508-7930
There are times when a Firefighter/Medic is called upon to perform a task that may leave some people wondering what we are doing. So it was this afternoon in our lovely rural community of Croom. A community near Upper Marlboro comprised of single family homes with large yards, tobacco farms and forests with many narrow, winding roads. A citizen stopped by the Croom Fire/EMS Station #845 frantically seeking the firefighter’s assistance. She explained that a couple of farm animals were wandering on the roadway in front of Frederick Douglas High School in the 8000 block of Croom Road and vehicles were swerving to avoid hitting them.

Without hesitation the firefighters of B-shift immediately went to investigate the situation and possibly provide some assistance. They drove to the scene on-board their fire engine, paramedic unit and the battalion utility truck. The Engine and Paramedic Unit remained available in the event of a emergency call was dispatched as the crews operated here. As they approached the scene they observed two citizens attempting to gather 2 goats which were avoiding their capture by scattering across the roadway in front of oncoming traffic. The goats, good samaritans and motorists were all in danger of being injured or killed.

It was clear to Fire Fighter/Medic Lieutenant Lisa Viars that their primary mission was not to capture the stray goats but to protect good samaritans, a nearby road crew and motorists from being involved in a tragic crash. Lt. Viars and her crew of Fire Fighter/Medic Pam Dorsey-Borders, Fire Fighter John Henson, Fire Fighter/Medic Chris Brooks, Fire Fighter/Medic Regan Carter and Brandywine Volunteer Fire Fighter Glenn Johnson immediately stopped all vehicle traffic on Croom Road in the area of the High School and planned to remove the hazard, the 2 goats and the gathering crowd of civilians, from the roadway.

Lieutenant Viars describes the ensuing “rescue” of the goats, “There were several attempts to capture the small goats, as they kept running in fear from the crew members. One goat was caught and placed in the bed of UT845. Croom Road was shut down to traffic while the crew attempted to capture the 2nd goat with the citizen’s assistance. In the meantime, the first goat daringly leapt from the utility truck, crying (bahhing) for its sibling. A road/landscaping crew working on the shoulder at Frederick Douglas High School joined in the rescue attempt at this time. Each time the crew would get close enough to pick them up, the goats were off and running. After several attempts of crawling under vehicles and apparatus, and chasing the young goats through the weeds and trees, the crew members, with the help of the citizens and road crew, managed to herd the goats into a small area and be captured.”

One of the main reason that our firefighters rescue or capture animals and pets that find themselves in unusual situations is that if we do not effect the rescue ourselves using the correct tools and safety procedures than a citizen or pet owner may attempt the rescue themselves and end up being injured and having to be rescued by us anyway. The rescue of animals and pets is always a decision based on safety first of everyone involved and certainly compassion for the animal/pet and their owner is taken into consideration. It is clear in this situation that if firefighters had not intervened there could have been tragic accident.

With the goats being held by firefighters, the crew had another issue; what to do with the two pygmy goats. With the consent of the stations volunteer chief, the crew transported the goats back to Fire/EMS Station #845. Viars and Carter each held a goat providing comfort during the trip back to the station where the goats were kept in a clean storage area and provided with nourishment.

The husband of Lt. Viars has volunteered to keep the goats until such time as the owner can be identified to retrieve them. Lt. Viars stated that one of the pygmy goats has a sticker with the number “574” on its head. The crew members affectionately named the two goats “574” and “845” (845 after the Fire/EMS Station number).

Prince George’s County Fire/EMS Chief Marc S. Bashoor joins Upper Marlboro Volunteer Chief Busi in congratulating the crew for taking control of an unusual and potentially dangerous situation and bringing it to a safe conclusion with no one being injured. 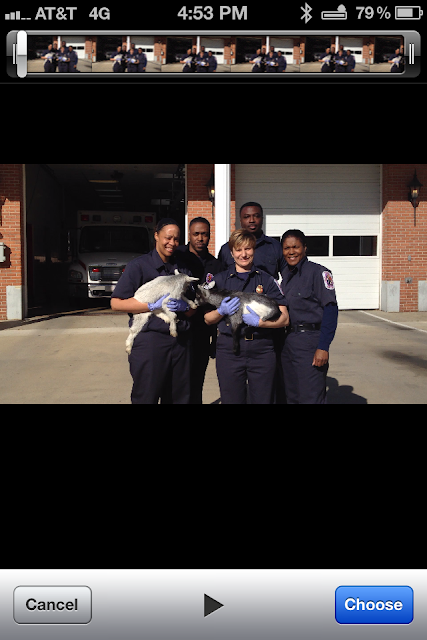 Posted by PGFD at 6:41 PM No comments: Links to this post

Lifesaving Leadership Flyer -
Posted by PGFD at 1:21 PM No comments: Links to this post

The 35th Prince George's County Public Safety Valor Awards Luncheon is approaching.  If you are interested in attending this event, please, make arrangements to do so within the week.  Tickets can be purchased by contacting Susan Taylor, Executive Aide to the Fire Chief, at 301-883-5204.
We look forward to seeing you there in support of our brave men and women of
Prince George's County Public Safety.
35 Valor Awards Employee Flyer -
Posted by PGFD at 1:01 PM No comments: Links to this post