EMS AWARDS and a Paramedic Reunites with Victim 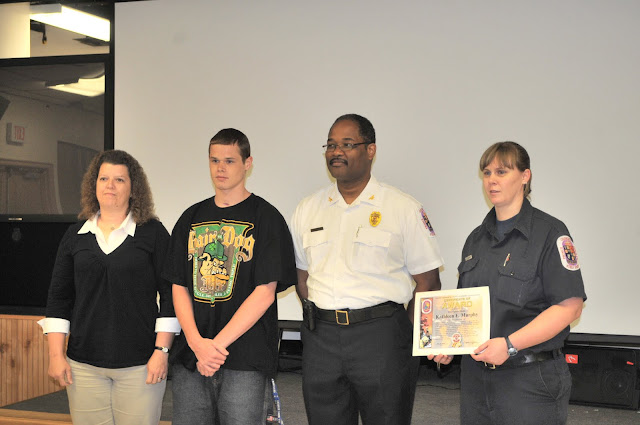 Cindy Mathieu, Chris Larsen, Fire Chief E.A. Jones and Paramedic K.E. Murphy
MEDIA CONTACT: Mark E. Brady, Chief Spokesperson, 240-508-7930
Several members of the Prince George’s County Fire/Emergency Medical Services (EMS) Department were honored on Monday, May 17, 2010. To help kick-off National EMS Week, Fire Chief Eugene Jones presented several awards. The best award of the day, however, wasn’t on a plaque or certificate. The best award a paramedic could ever receive is when a victim is able to walk up and say, “Thank you for saving my life.” Fire Fighter/Paramedic Kathleen Murphy was greeted by 21-year-old Chris Larsen and his mother Cindy Mathieu. Chris Larsen was a multi-system trauma patient that sustained critical, life threatening, injuries when a vehicle fell on top of him. Paramedic Murphy and her partner, Fire Fighter/Paramedic Scot A. Williams, worked relentlessly providing pre-hospital care to the critically injured victim. Trauma physicians credit the care provided by these paramedics for sustaining his life until he could reach the Trauma Center. Both victim and his mother thanked Murphy and called her and Paramedic Williams everyday heroes that go about their jobs everyday doing everything they can do to save lives.


Fire Chief Jones feels the same way about all his personnel and honored several today with Emergency Service Awards, Employee of the Month Award and a Fire Chiefs Award.

This paramedic crew from Medic 829 is being recognized for their actions on September 15, 2009, when they responded on a call in the 100 block of Panorama Drive in Oxon Hill. Upon arrival they were presented with a 20-year-old male that sustained a multi-system trauma after an automobile he had been working underneath fell on top of him. Their diligence in providing advanced life support to this young man was a key factor in saving his life. Emergency Room Physicians told the victims family that her son is alive today because of the pre-hospital care administered by the Paramedics. These actions reflect favorably upon themselves and on the Fire/EMS Department as a whole. 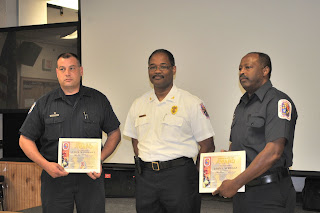 This crew from Paramedic 816 is being recognized for their assessment of an adult male experiencing a cardiac emergency in the waiting room of the Bowie Health Center. The crew observed the patient being brought into the Emergency Room by his family members and immediately brought this patient to the attention of the ER physician. He concurred with the crew’s intuition that this patient was in dire need of a cardiac catherization. To save time, the medics waited at the facility until arrangements were made for an emergency transport to the Cath Lab at Prince George's Hospital Center. Their unselfish and intuitive actions resulted in this patient being at the Cath Lab in record time. He has since fully recovered from his cardiac episode. The patient’s condition may have worsened if it were not for their initial intervention and continued assistance. Their actions reflect favorably upon themselves and of the entire Fire/EMS Department as a whole.

This crew from Paramedic Ambulance 826 are being recognized for actions that occurred on November 11, 2009, in the District Heights area. The crew responded to a sick person call and encountered an adult male that was refusing any treatment. Rather then leave the patient the crew sensed something was not quite right and were successful in having the patient allow them to check his vitals. Unable to palpate a radial pulse, they hooked the patient up to a cardiac monitor and found the patient to be in Ventricular Tachycardia. This cardiac rhythm left untreated will lead to cardiac arrest. Following protocol, they cardio-verted the patient into a normal sinus rhythm. The patient was delivered to the hospital with an improved medical outlook. The patient’s condition surely would have deteriorated if it were not for their initial intervention and continued assistance. Their actions reflect favorably upon themselves and of the Fire/EMS Department as a whole This crew from Medic 829 are being recognized for their assessment and pre-hospital care provided to an elderly female experiencing 3rd degree heart blockage; a condition rarely encountered by field EMS personnel. The crew performed advanced life procedures while en route to Southern Maryland Hospital. They continued to provide patient treatment for up to an hour assisting the emergency room staff. Their treatment had a direct impact on saving this patient’s life as stated by hospital staff, “The Paramedics did an excellent job. The patient would not have survived without their initial intervention and continued assistance.” Your actions reflect favorably upon yourself and of the entire Fire/EMS Department as a whole.

EMPLOYEE OF THE MONTH 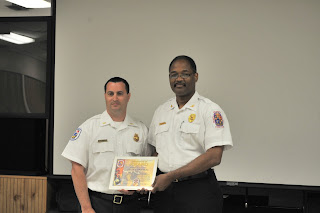 Fire Fighter/Medic Lieutenant Frankel researched and applied for a grant. The grant was successfully awarded to the Fire/EMS Department in the amount of $120,000. This grant will allow the Department to purchase two (2) next generation full-bodied patient simulators, one (1) ambulance environment simulate, and the associated audio-visual equipment needed to enhance the current patient simulation lab in use at the Fire/EMS Training Academy.
Because of Fire Fighter/Medic Lieutenant Frankel’s passion for the training and educating of our employees and members, his insight into the needs and acquisition for this type of training equipment to improve and enhance the delivery of the EMS materials will allow us to be more self-sufficient and provide state-of-the-art training techniques and create a more realistic training environment with instant feedback for the student.
FIRE CHIEFS AWARD 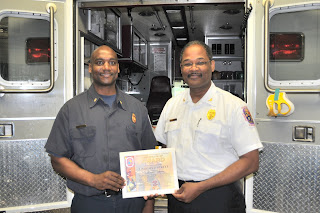 Fire Chief Jones recognized Lt. Street for going above and beyond the call of duty. While returning from a call in the College Park area Fire Lieutenant Street found a pocket book in the street. He stopped and retrieved the pocketbook and found it to still contain valuables and personal contents. Street took it upon himself to track down the owner return her purse saving her the trouble and stress of having to cancel her credit cards and obtaining new documents.
Posted by PGFD at 2:35 PM No comments: Links to this post