Medics discovered a dangerous situation this morning when they arrived to treat a 911 caller that felt sick.  At around 12:30 am, Wednesday, June 20, an ambulance and a medic unit were dispatched from the Laurel Fire/EMS Station 810 to a townhouse on Pineywood Place after an adult male occupant called 911 and reported he was ill.

When the crews entered the home they encountered a male and female occupant, both 70ish years of age, and started their patient assessment.  A device attached to the medic’s radio went into alert indicating high levels of carbon monoxide (CO).  The ambulance crew and medics immediately knew they were dealing with carbon monoxide exposure to the two occupants.  Medics requested additional resources to the scene and evacuated the occupants to the fresh air environment of the homes exterior and started oxygen on both patients.

Firefighters arrived quickly and used their monitoring equipment to find there were upwards of 1000 parts per million (ppm) of carbon monoxide inside the townhome. A normal range of CO inside a home can range from 0 to 35 ppm.

CO is a byproduct of a fossil fuel after combustion.  CO defies all human senses and cannot be seen, smelled, heard or tasted and affects a person after being exposed and inhaling the toxic fumes earning the nickname of the “silent killer”.   After the toxic fumes are unknowingly inhaled CO displaces oxygen inside of your lungs and denies the much-needed oxygen to vital organs.  Exposures to CO will make a person sick up to being fatal depending on the level of CO and how long you are exposed.

The only way to determine the presence of unhealthy CO levels in a home is to have working CO detectors.  County Law requires a CO detector on every level of your home if you have natural gas services, a fireplace or an attached garage.  CO detectors can be purchased at home improvement, electronic and hardware stores.

Both occupants displayed signs and symptoms of CO exposure and were transported to an area hospital with hyperbaric services.  A hyperbaric chamber is typically the treatment of choice for patients suffering from CO exposure.

Firefighters searched the townhouse for a source of the CO.  All natural gas burning appliances and ventilation systems were checked in the house as well as adjoining townhouses.  A running auto in the attached garage was found to be the source of the high levels of CO.  It appears that the vehicle was left running accidentally.

Starting in 2015 all radios assigned to PGFD EMS crews have a portable CO detector attached to it.  This will assist EMT’s and Medics to detect the presence of CO when confronted with a situation like today.  The rapid detection protects the crews and allows for a faster treatment of the exposure. 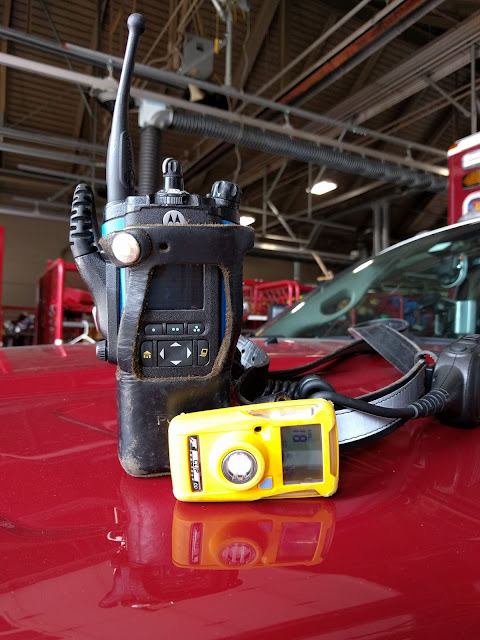 Posted by PGFD at 11:01 AM No comments: Links to this post