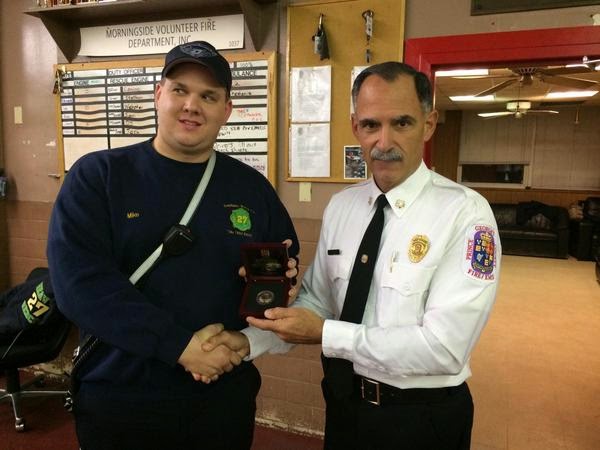 Thank you for everything you do – especially for the service you provide to the Prince George’s County Fire/EMS Department and more importantly to the communities we serve.

The MVFD’s performance ensuring both fire and emergency medical transport services are provided out of the Morningside station has been tremendous – indeed there has been a significant cost savings, allowing career personnel to be redeployed to other locations where there was a more urgent need for career staffing.

Of the nine all-volunteer stations in Prince George’s County, six provide service for both fire and EMS transport services.  Two of those, Bladensburg and Morningside have been able to provide continuous fire and ambulance coverage over the past year, congratulations.

Chief Poetker and I spoke the other day, much as Chief White and I have spoken for the past couple of years, in terms of this odyssey.  Chief Poetker told me, he “knew we were standing on opposite sides of the fence”, however he was glad to have that behind us.  I would like to say that I don’t believe we were ever on opposite sides – we were on the same track when we came to a crossroads.  Thankfully, we both stayed on the correct track – that is the track to provide fire and EMS transport service to our communities.

On behalf of County Executive Rushern Baker III, I applaud your service to Prince George’s County.  As your Fire Chief, I thank you for the time, service, dedication, and the sacrifices that you and your membership make everyday to ensure fire and ambulance service is maintained at Morningside.

Chief Poetker, on behalf of all of your membership, please accept my thanks and appreciation, and this Department Meritorious Service award.