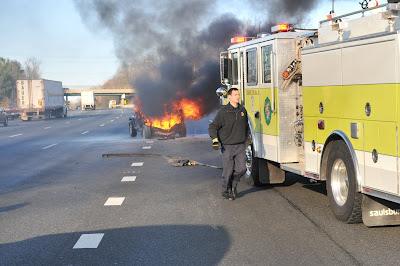 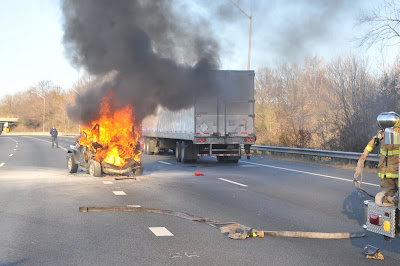 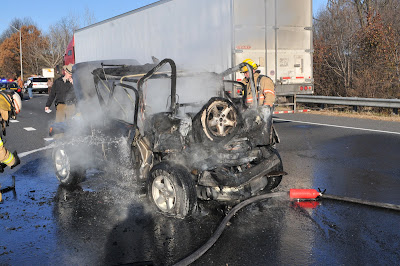 A 27-year-old female can celebrate the Holiday Season this year because a host of Good Samaritans came to her aide and pulled her from her burning Jeep Wrangler. At about 8:45 AM, Wednesday, December 16, 2009, a multi-vehicle crash occurred on the outer loop of the Capital Beltway (Route 495) between Baltimore Avenue (Route 1) and Interstate 95 in College Park. A tractor trailer rear-ended the Jeep Wrangler which continued to travel about 75 yards from point of impact. The collision caused significant damage to the rear of the Jeep and ruptured the vehicles fuel tank. The female driver was dazed and unable to get out of the vehicle due to her foot being stuck underneath the gas/brake pedal and the vehicle doors could not be opened as a result of the crash damage. The rear end of the Jeep then erupted with flames.

Several Good Samaritans saw the vehicle catch on fire and went to assist the occupant. One civilian rescuer tried to knock the fire down with an extinguisher as others jumped onto the vehicles hood and ripped the cloth top roof of the Jeep Wrangler. They were able to maneuver her foot from the gas/brake pedal and lifted her up through the open roof. At this point the fire was involving the rear of the vehicle; however, when firefighters and paramedics arrived they found the Jeep well involved with fire. No one would have been able to survive injuries if they were still in the burning vehicle upon Fire/EMS Department arrival.

The Jeep driver, a 27-year-old female, was taken by paramedics to a trauma center with potentially serious injuries, fortunately, non-life-threatening. A second vehicle operator, adult female, was transported to an area hospital with minor injuries. The tractor trailer driver was not injured and remained on the scene. The Maryland State Police – College Park are investigating the incident.

Posted by PGFD at 2:10 PM No comments: Links to this post