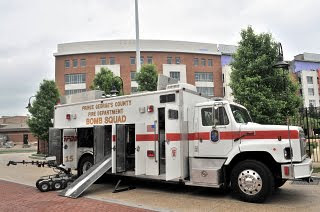 The Prince George’s County Fire/EMS Department’s Bomb Squad received its National Accreditation from the Federal Bureau of Investigations (FBI). The accreditation acknowledges that the bomb squad has met all the criteria (equipment, training and personnel) set forth by the FBI and the National Bomb Squad Commanders Advisory Board (NBSCAB). In addition, this places the squad in a certified status as one of 470 certified squads in the United States. The accreditation is good for 5 years and allows the bomb squad to continue to participate in federally funded training and to be recipients in federally funded grants, such as the Urban Area Security Initiative (UASI). Prince George’s County is one of 41 Fire Departments that are part of the 470 certified bomb squads across the Country. The Bomb Squad received this accreditation on Tuesday, August 11, 2009.

Prince Georges County Fire Chief Eugene A. Jones stated, “This is a high honor and speaks highly of the dedication and commitment of the men and women that risk life and limb to keep our communities safe. This distinction also demonstrates the continued support of our elected officials to ensure we have the equipment required to reach this high level of certification.”

“I am proud of the countless hours of training, work and dedication that the members of the squad have committed to make the accreditation possible under my watch,” said Bomb Squad Commander, Captain Dale Ednock. He stated, “Each and everyone one of them should be commended for their professionalism and their dedication to the safety of the citizens and fellow Public Safety Personnel of Prince George's County.”

The Bomb Squad falls under the command of the Fire/EMS Departments Office of the Fire Marshal. This command, under the direction of Major Scott Hoglander, is charged not only with enforcement of explosives laws and mitigation of explosives hazards they also have the responsibility of the determination of origin and cause of fires and explosions, investigation and abatement of all fire and explosives incidents, and other emergencies within Prince George's County as outlined in Subtitle 11 of the Prince George's County Code. The Bomb Squad is comprised of an extremely talented and experienced group of individuals that can provide an array of expertise and a cache of technical and specialized equipment and tools capable of handling incidents.
Posted by PGFD at 11:12 AM No comments: Links to this post