The Prince George’s County Fire/Emergency Medical Services Department conducted a graduation ceremony for twenty-seven recruit firefighters. The ceremony was held at the auditorium of the Charles Herbert Flowers High School in Springdale on Monday, June 11. The ceremony was attended by families of the recruits as well as County Government leadership, the Fire/EMS Department command Staff, training academy instructors, and representatives from area jurisdictions.

During his comments Fire Chief Goddard addressed the recruits by saying, “Every day firefighters and paramedics in the Prince George’s County Fire/EMS Department are heroes. Every day, they are ready and willing, at the sound of the alarm, to make the ‘supreme sacrifice’ for those they do not even know! I congratulate each of you for a job well done and I welcome you to the Nations fire and EMS family.”

In his comments Fire Chief Marc Bashoor spoke to the recruits and said, “Whatever you do, don’t ever lose your passion - or your compassion. No matter the situation, remember first and foremost that we are there to help. We are the ones who will be expected to bring calm to turmoil; and order to chaos. The one thing that I can guarantee you is that for the next twenty-plus years, you are going to interact with people who you do not know, who are dealing with the absolute worst moments of their lives. They will be looking specifically to you to resolve the challenges they face. If you choose to treat them with respect and compassion, you will receive double the respect and reward in return. If you should choose to treat them with disdain and contempt, you WILL get those emotions back ten-fold.”

Chief Administrative Officer Bradford Seamon, speaking on behalf of County Executive Rushern L. Baker, III, spoke of his respect for members of the Fire/EMS service. Both Mr. Seamon and Mr. Baker had recently attended an EMS award dinner and were amazed and enlightened at the stories of the life saving skills demonstrated by our Firefighter/Medics. Additionally, Seamon and Baker had both participated in the FIRE OPS 101 and as he told the recruits, “received just a glimpse of what you go through.”

The recruits were administered the Oath of Office by the Honorable Marilynn M. Bland, Clerk of the Circuit Court for Prince George’s County.

The Fire Suppression Scholastic Achievement Award is presented to an individual in each Career Recruit School who achieved the highest academic average on the fire suppression written examinations and practical evolutions.

The Instructor’s Award is presented to an individual in each Career Recruit School who has shown the highest level of personal improvement, development, and dedication during the class. In short, we identify the individual who has contributed significantly to the success of the class overall either by helping others or through self-improvement. The individual earning this award can be one with no previous experience in emergency services and progresses to an outstanding level of proficiency; or an experienced person who dedicates him or herself to assisting other class members be successful throughout Career Recruit School.

The Memorial Award is a very special recognition presented to an outstanding individual from each Career Recruit School who has displayed that rarest combination of professionalism, courage, and "espirit de corps." Such traits serve to honor their fallen comrades, and uphold the highest traditions of the Prince George’s County Fire/Emergency Medical Services Department.

The Fire Chief's Award is the highest recognition for Career Recruit Schools. This award is bestowed on an individual in recognition of achievements that have made significant contributions to the graduating class. Selection criteria emphasize leadership, professional development, integrity, performance, and personal growth. This award is given to the individual who best exemplifies the conduct required of the Prince George’s County Fire/EMS Department.

Career Recruit School #45 continued with recent recruit classes’ tradition of benevolence. They conducted fund raising activities including, among others, a car wash and a run across Woodrow Wilson Bridge. The class raised $2,000 and split the donations between the National Fallen Firefighters Foundation and the Frank Colea Benevolence Fund.

Posted by PGFD at 5:10 PM No comments: Links to this post

Brandywine Fire/Emergency Medical Services (EMS) Station 840, located at 13809 Brandywine Road in Brandywine, Maryland, will break ground in June 2012. Our newest facility is a state-of-the-art facility, which will provide a functional and safe work environment for our volunteer and career fire fighters and paramedics, as well as improved bath, shower, and locker facilities to accommodate our increasing number of female personnel.

Service delivery to our community

• Apparatus: The station will house a variety of modern fire and EMS resources, including:

• Training/Meeting Room: equipped with audiovisual equipment, multiple computer network capabilities, and space to accommodate between 24-42 persons, depending upon room configuration.

• Training Prop for Drafting: enables our personnel to simulate realistic training evolutions that involve the utilization of static water sources, such as ponds, creeks, and pools. This type of evolution is predominantly performed in the rural tier where fire hydrants are not readily available.

Posted by PGFD at 4:54 PM No comments: Links to this post

Just after 9:30 am, Wednesday, June 13, firefighters from the Hyattsville area responded to a report of a house fire in the 4000 block of Madison Street.  Fire/EMS units arrived to find a 1 ½ story, with basement, Cape Cod style house with heavy fire showing from the first floor.  An aggressive interior attack and simultaneous search of the structure was implemented with the fire being knocked down within 15 minutes of arrival and all searches proving negative.   The structure is being used as a boarding house and seven unrelated residents will be displaced.  They are being assisted by the County Citizen Services Unit and the American Red Cross.

The fire appears to have started in a bedroom on the first floor.  Prince George’s County Fire Investigators are working to determine the cause of the fire which remains open and under investigation.  An additional investigation is underway concerning the use of the structure as a boarding home.

One firefighter sustained burn injuries to his leg and was treated and released from an area Burn Unit.  No civilian injuries were reported.  Fire loss is estimated at $50,000.

Posted by PGFD at 3:05 PM No comments: Links to this post

An event was held at the Bladensburg Volunteer Fire Department on Tuesday, June 12, that included Congressional recognition for seven volunteer firefighters and the Fire/EMS Department.  Congresswoman Donna Edwards presented plaques to firefighters that were injured on a house fire in Riverdale in late February of the year.


“I am honored to recognize the courage and bravery of these seven Prince George’s County firefighters who made personal sacrifices in the line of duty to ensure our safety and well-being,” said Congresswoman Edwards. “Our firefighters deserve our utmost respect, as many volunteer to take on the daily responsibility of protecting our communities, facing unknown dangers and diminishing resources.   They are our heroes, and I wish each of them quick and full recoveries.   I thank them for their service and commitment to the citizens of Prince George’s County and the state of Maryland.”


During his comments Fire Chief Bashoor thanked Congresswoman Edwards for her support and spoke of the ongoing safety investigation of the incident where the firefighters were injured.  Bashoor stated, "The Safety Investigation Team is conducting a detailed analysis of the circumstances surrounding this incident and these injuries.  I believe that analysis will provide the basis for the Fire/EMS Department to make improvements that will minimize the possibility of these types of injuries occurring again.  It is important for everyone to understand - it does not appear that everything went perfectly at this incident - it rarely does.  The Safety Investigation Teams work is a crucial step in the Fire/EMS Departments growth of a culture of risk-based safety." He concluded with, "Our solemn responsibility is to each and every Dept and family member - that we will keep safety first and do everything we possibly can to ensure everyone goes home."


The event was well attended by members of the Fire/EMS Department Command Staff, volunteer members from Bladensburg, Riverdale, College Park, Kentland and Hyattsville.  Bladensburg Volunteer Chief Randy Kuenzil served as the host and the Ladies Auxiliary provided an outstanding meal for everyone in attendance.  Thanks to all involved in making this a successful event.


Thanks also to Congresswoman Donna Edwards and her hard working staff.  It is good to know that our elected officials at the Congressional level are watching and supporting us at the local level.  You can't get any more "grass-roots" then recognizing your local firefighters for the job that they do every day. 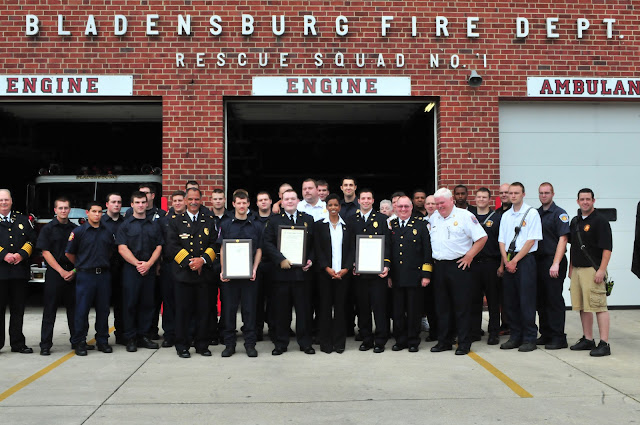 Posted by PGFD at 7:27 AM No comments: Links to this post