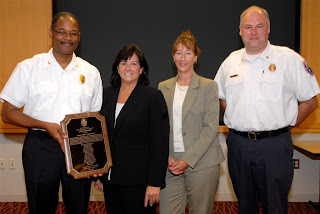 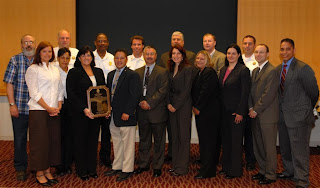 Prince George’s County Fire Chief Eugene A. Jones presented the Departments highest award to agents and forensic specialists from the Bureau of Alcohol, Tobacco, Firearms and Explosives (ATF). Fire Chief Jones presented a Unit Citation to the ATF during a ceremony at the National Lab in Beltsville, Maryland on Thursday, September 4, 2009. In making the presentation Fire Chief Jones stated, “This case was made through the diligence and teamwork of a very talented group, including agents from the ATF and the personnel that work with forensic evidence.”

The ATF was part of an Arson Task Force that also included local and State agencies that received their Unit Citations earlier this year.

Beginning in March 2007 and continuing through August 2007 a series of fires were set in the Springhill Lake Apartment complex in Greenbelt, Maryland causing approximately 2 million dollars in damages. Springhill Lake Apartments are one of the largest apartment complexes on the east coast and contain 2,900 apartments for rent. The random nature of these fires, within the occupied buildings, caused thousands of residents to live in fear each day.

A task force was established to investigate the arsons which consisted of ATF, Prince George’s County Fire Department, Maryland State Fire Marshal and the Greenbelt City Police Department. Investigators followed numerous leads and collected evidence for laboratory analysis. As a result of their investigative efforts, a resident, Jeremiah Jones (21 years of age) was identified as a possible suspect. Jones lived with his parents in the Springhill Lake Apartments adjacent to the cluster of fires.

The task force quickly established surveillance (both mobile and video) of Jones and the exterior of his apartment building in an effort to obtain additional evidence and determine if Jones was, in fact, responsible for the fires. In addition, the ATF Forensic Science Laboratory conducted extensive forensic analysis of the numerous items of evidence recovered from the various fires. This analysis included DNA, trace, fingerprint and fire debris analysis.

On August 14, 2008, Jeremiah Jones pled guilty in U.S. District Court, Greenbelt, Maryland to nine (9) counts of arson relating to the fires in Springhill Lake Apartments in violation of 18 USC, Section 844(i). On April 2, 2009, Jones was sentenced by Judge Alexander Williams to 96 months imprisonment followed by 36 months of supervised released.
Posted by PGFD at 4:53 PM No comments: Links to this post 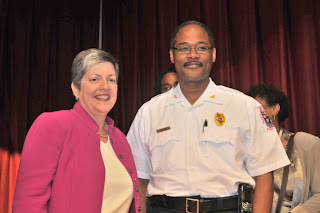 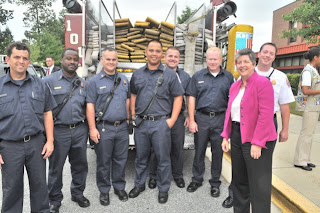 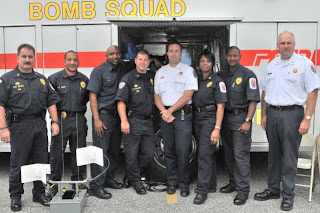 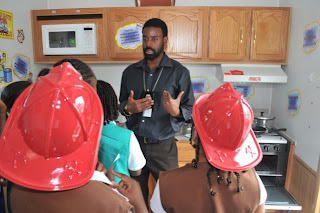 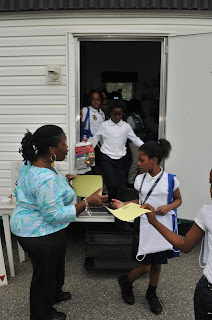 Department of Homeland Security (DHS) Secretary Janet Napolitano met with Prince George’s County officials and municipal leaders at an event hosted by the City of Laurel to highlight Preparedness Month.

The event took place Tuesday, September 8, 2009, at Scotchtown Hills Elementary School in Laurel, Md., where Secretary Napolitano participated in President Obama’s My Education, My Future initiative by visiting students and listening to the President’s remarks encouraging them to work hard, set educational goals and take responsibility for their learning. While addressing county and municipal leaders at a press conference after the Presidents televised address, Secretary Napolitano mentioned the importance of first responders and acknowledged the presence of firefighters and police officers at the preparedness event.

Theses events and displays are part of September’s National Preparedness Month, during which Secretary Napolitano is encouraging citizens around the country to focus on becoming better prepared for and more resilient in the face of emergencies of all kinds.

For more information about Citizen Corps, visit www.citizencorps.gov. To learn more about the Prince George’s County Fire/EMS Department, visit www.pgfireems.com.
Posted by PGFD at 4:03 PM No comments: Links to this post