A carbon monoxide detector sounded an alarm when unhealthy levels of the toxic gas built up in a Chillum home.  An alarm company monitoring the homes alarms system notified Prince George’s County Public Safety Communications of an activated CO detector at a home in the 6100 block of Westland Drive.

Firefighters from the Chillum Fire/EMS Station were dispatched to investigate and arrived at the 2-story, split level, single family home at around 7:00 pm, Friday, July 3.  Firefighters received no response after knocking on the front door several times.  The officer-in-charge made the decision to force entry into the home to further investigate.

Once inside they found two occupants that appeared to be suffering from CO exposure and immediately called medics to the scene.  Firefighters used gas detection meters and discovered 100 parts per million (ppm) of CO in the house.  A normal CO level in a home could be anywhere between 0 and 30 ppm.  Anything above 30 ppm is considered unhealthy.

A defective stove was found to be the source of the CO, which was turned off by firefighters.

The two occupants were transported to a nearby hospital in good condition.  Had the CO not been detected the couple would have been exposed for a longer duration and suffered a more serious illness and possible death.  The warning of unhealthy CO levels by the working CO detector prevented further illness.

County law now requires a CO detector on every level of your home.  CO is an odorless and invisible gas that is a byproduct of combustion.  Exposure to CO will initially make you feel sick with prolonged exposure to unhealthy levels possibly killing you.

A working CO detector is the only device available to provide a warning of unhealthy levels of the deadly gas.
Posted by PGFD at 10:51 PM No comments: Links to this post

A fire of an undetermined cause caused significant damage to a Calverton home this afternoon with the occupants needing every second to escape uninjured.  Working smoke alarms provided them with just enough notice to escape.

Firefighters were alerted to a 911 call reporting a house fire in the 3600 block of Stonehall Drive in the Calverton just after 3:00 pm, Friday, July 3.  Firefighters from both Prince George’s and Montgomery County responded on the call and arrived to find a 2-story, 2089 square foot, split level, single family home with fire and smoke showing.

A husband and wife were at home when 2 smoke alarms, one on the 1st floor and one on the 2nd floor, emitted their warning signal that smoke was detected in their home.  A female that normally uses a walker or wheelchair was taking a nap and awakened by the smoke alarm.  Her husband went to investigate why the smoke alarms were sounding when a neighbor started to pound on the front door telling the couple their house was on fire.  The husband heeded the neighbors advice and  immediately went to assist his wife out of bed then to safety.

A fire had started on the lower level of the house and was spreading rapidly through the homes interior.  Firefighters were able to bring the fire under control after 15 minutes of arrival on the scene.  Remarkably, no one was injured.  Two working smoke alarms alerted the occupants and they used every second available afforded by the early alert to exit the smoke and heat filled house.

The homes occupants, 3 adults, were displaced.  They have made their own arrangements for housing.  The cause of the fire is under investigation and a preliminary fire loss is estimated at $150,000.

Working smoke alarms increase the chances of surviving a home fire by 50%.  A planned and practice exit from your home, identifying two ways out of every room, is crucial in the short period of time you have to escape.

This is a citizens video captured prior to the Fire Department arrival.

Posted by PGFD at 10:18 PM No comments: Links to this post

A Capitol Heights female sustained traumatic injuries to three fingers when a fireworks device exploded in her hand.  The adult female was transported to a nearby Trauma Center for treatment of her injuries.  The incident occurred around 9:30 pm on Thursday, July 2.

Our fireworks law is a law we can live with.  It is intended to curb injuries and fires associated with fireworks.

The Prince George's County Fire/EMS Department is offering an Amnesty Program for residents to surrender their fireworks without any fear of prosecution.  You must follow the rules detailed below to be eligible for this program. 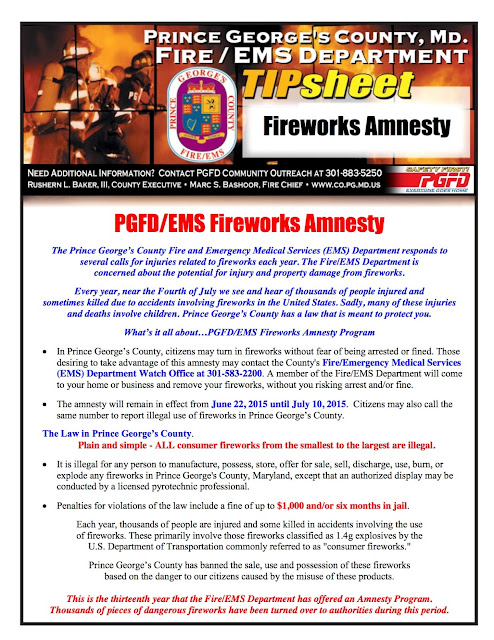 Posted by PGFD at 10:57 AM No comments: Links to this post