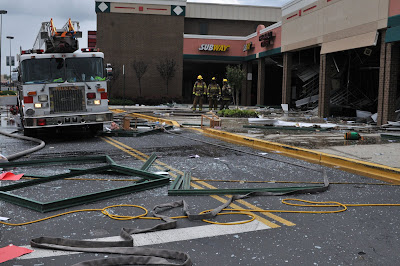 On May 7, 2009 an incident occurred that will be forever remembered by members of the Prince George’s County Fire/Emergency Medical Services (EMS) Department. Firefighters answered the call that started out as an odor of natural gas inside of several stores in a strip mall in Forestville. The incident at the Penn-Mar Shopping Center progressed with an explosion that injured several firefighters and destroyed a portion of the strip mall. The dramatic event was captured in a 20-second video from the dash camera on-board District Heights Engine 826. This short video aired world-wide just hours after it occurred and allowed viewers a small glimpse of how close we were to disaster.
After evacuating nearly 50 patrons and employees from serious and possible fatal injuries; firefighters operating in the area of the stores bore the brunt of the explosion.
The first cable TV show of this dramatic incident will debut with “Most Daring” on the TRU TV Network. The episode is scheduled to air on Wednesday, August 19, 2009, at 9:00 PM. Check your local cable guide for channel listings and visit their website
Posted by PGFD at 1:03 PM No comments: Links to this post 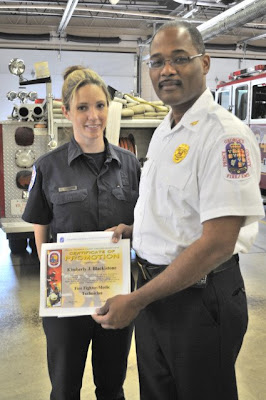 Prince George’s County Fire Chief Eugene Jones returned to his first assignment out of career recruit school today to make a promotional presentation. On Friday, August 7, 2009, Kimberly J. Blackistone was presented with her Certificate of Promotion by Fire Chief Jones at the Accokeek Fire/EMS Station #824. The promotion to Fire Fighter/Medic Technician was effective on July 26, 2009.
Posted by PGFD at 12:38 PM No comments: Links to this post