Jessica Poole was arrested for setting fire to an Upper Marlboro building on August 2, 2018. She plead guilty to one count of Arson (1stDegree) and one count of Arson (2ndDegree). Poole was sentenced today to (20) years, of which all but 18 months were suspended by the judge. As a part of the plea deal, the remaining charges were “nolle prossed.”

Poole will also be placed on five years of supervised probation, and is ordered to undergo alcohol and drug treatment programs as well as an anger management program.

Personnel from the Office of the Fire Marshal received “Another job well done for their diligent work in bringing this case to an arrest and conviction,” said County Fire Chief Benjamin M. Barksdale. “This sentencing is the second in the past two weeks for arson, and I commend everyone involved. Arson is a serious crime, and we will work day and night to find whoever is responsible as well as work with our States Attorney’s Office to prosecute offenders to the fullest extent of the law.”

Posted by PGFD at 5:54 PM No comments: Links to this post

Prince George's County Fire Chief Benjamin M. Barksdale congratulated his Fire Investigators for a job well done after the sentencing of a arsonist last week.  Investigators from the Department's Office of the Fire Marshal worked diligently to investigate, identify a suspect, arrest and assist in the prosecution of Tyree Torney.
"Arson is a heinous crime that will always be investigated relentlessly by a very talented and skilled group of fire investigators," stated Fire Chief Barksdale.  "We will work together with prosecutors to ensure that anyone charged with Arson and related crimes is prosecuted to the fullest extent of the law."
The sentencing of Tyrone Torney is an example of the teamwork of fire investigators and prosecutors.

The convicted arsonist was vying to become a volunteer member within the combined Fire/EMS Department. The investigation discovered that Torney had participated in a popular and long established ride-along program.  To ensure the ride-along program meets the expectations of it's participants an internal Department review is being conducted.
Press Release from Office of the States Attorney for Prince George's County

UPPER MARLBORO, MD – Tyree Torney, 20, was sentenced to 30 years, suspend all but years, with all but eight years of the sentence suspended followed by five years of supervised probation for first degree arson and other related charges in three separate cases, announced State’s Attorney Aisha N. Braveboy today at a press conference.
On February 11, 2019, Proctor pled guilty to first degree arson, first degree attempted arson, malicious burning and other related charges.
In the first incident, on May 2, 2017, Mr. Torney started a fire on a wooden bridge near his home in Hyattsville. A month later, on June 10th, he set fire to his ex-girlfriend’s house, knowing that she and her family, including an infant, were inside the home at the time.
Additionally, on the evening of February 12, 2018, Mr. Torney started a fire in a supply closet at Suitland High School in Suitland. The school at the time was occupied including janitorial personnel, a few students and one teacher.
“This is a very unfortunate case, in which Mr. Torney, on three separate, occasions intentionally set fires across our county,” said State’s Attorney Braveboy. “Today, we held Mr. Torney accountable for his senseless and very dangerous actions. We are sending a message that if you commit arson, and put people’s lives at risk, you will face the consequences.”
Contact:
Denise Roberts
Communications Director
Office of the State’s Attorney, Prince George’s County
dgroberts@co.pg.md.us
240-832-4970 cell or 301-952-2848 office

Posted by PGFD at 7:56 AM No comments: Links to this post

Memorial Day is commonly thought of as the start of summer.  Most students are still in school and the pool water might still be a little chilly, however, the traditional start of summer is here.

Summer vacations are being planned with "staycations" becoming more popular with residents enjoying swimming, BBQ'ing and planning many other fun activities right here in Prince George's County.  The Memorial Day weekend is when many private, public and home swimming pools open as well as BBQ grills are cleaned off and readied for summer cook-outs. 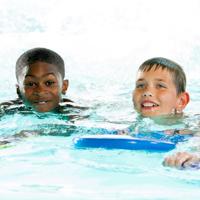 Everyone needs to keep safety at the forefront of every activity.  We offer these common sense safety tips that will help to keep everyone safe including our firefighters and paramedics.  By you staying safe, keeps our emergency personnel in the Fire/EMS Station and available for other incidents.  Remember, Safety First!!! 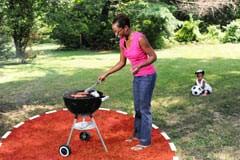 It is anticipated that many backyard barbecues will be in use over the course of this upcoming long holiday weekend and throughout the summer months. The men and women; volunteer, civilian and career of PGFD recommend that you exercise caution and keep safety in mind when setting up, using and cleaning your BBQ grill.   Did you know that cooking, most notably "unattended cooking" is the number one cause of fires and fire related injuries in Prince George's County?? This includes both inside and outside cooking: WATCH WHAT YOU HEAT!!!

•  NEVER use a grill indoors including garages, overhangs and canopies

•  By Law - Grills must be at least 30 feet away from any multi-family apartment dwelling.

•  When using a grill at your single family home – homeowners should use a safe distance from anything combustible – including your house!!! Never place a grill up against your house, wood deck or fence.

•  Do not allow children and pets to play near a grill - set up a 10 foot safety zone around your grill.

•  Keep a fire extinguisher, garden hose or bucket of sand nearby to douse a grill fire that gets out of control.

•  Inspect your grill before you ignite to ensure everything is in working order. This inspection includes all connections on your gas grills are tight and not leaking.

Charcoal ashes and used briquettes should be disposed of in a metal container and allowed to cool down for up to 48 hours before disposal.  Keep ash container off of your wood deck and away from your house.

Currently our forecast calls for a beautiful Holiday weekend and thousands of residents will be taking full advantage of swimming pools.  Keeping safety first will help to prevent such a festive occasion from becoming a tragedy. 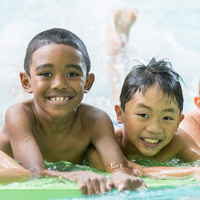 •  Always watch your children and never leave them unattended.  A lack of adult supervision is one of the leading contributing factors to children drowning.

•  Do not rely on flotation devices to protect your children from drowning. You must supervise at all times.

•  Have children swim in pairs - the "buddy system"

•  If a child is missing - check the pool first.

•  Teach your child how to swim. Visit www.pgparks.com/aquatics.htm for additional information.

•  Learn CPR and how to use an Automatic External Defibrillator (AED). Visit http://www.redcross.org/take-a-class or call the Fire/EMS Department CPR Information line at 301-864-LIVE (5483).

Personal Flotation Devices (PFD's) are important and can help to prevent accidental drowning in any area of water.  A child wearing a PFD does not excuse adult supervision.


For home pool owners and managers:

•  Install a fence around the perimeter of the pool.

•  Use self-closing latches and gates.

•  Install a door alarm from the house to the pool area.

•  Have lifesaving equipment nearby such as life rings or reaching poles.  Commercial and public pools should have an AED readily available and personnel trained on how to use it if needed.

Speaking of swimming pools, Firefighter/Medics can perform a wide variety of services, emergency and non-emergency, to assist our citizens, visitors and businesses.  One of the services we do not provide is to fill your swimming pool with water.  Please contact a contractor that can provide this service for you.

As always, never drink and drive.

Check your smoke and CO alarms to make sure they are working. Make sure overnight guest are familiar with your home escape plan and the safe place to meet outside.

The combined volunteer, civilian and career men and women of the Prince George's County Fire/EMS Department wishes everyone a festive and safe Memorial Day.  Keep safety in every aspect of your event!!!


Posted by PGFD at 2:46 PM No comments: Links to this post

Elected Officials Will Feel the Heat at IAFF Fire Ops 101 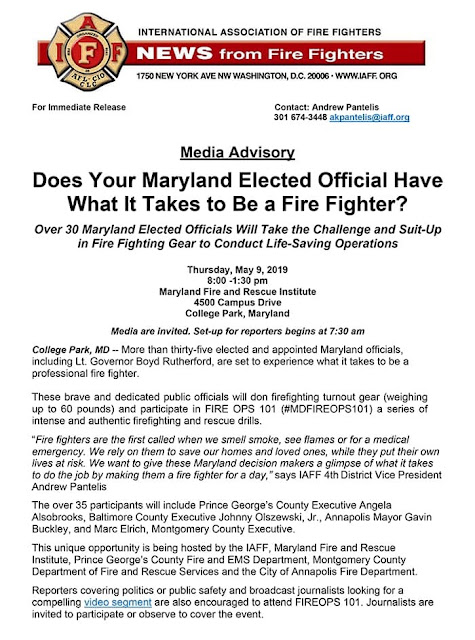 Posted by PGFD at 12:44 PM No comments: Links to this post