Call our Safety First Program at 301-864-SAFE (7233) to make arrangements for a free smoke alarm that will be installed in your home by a firefighter.

Click here for USFA Page for Kids
Posted by PGFD at 1:46 PM No comments: Links to this post

View more videos at: http://nbcwashington.com.
Posted by PGFD at 1:46 PM No comments: Links to this post

It is with deep regret that we announce the death of a fourth victim of the Glenarden house fire that occurred around 4:00 am on Thursday, February 21, 2013.

Daijah Price, 11-years-old, passed away late Friday night, February 22, at Children’s National Medical Center (CNMC) in Washington, DC.  She had been transferred to CNMC after her pulse was restored at Prince George’s Hospital Center on Thursday morning.

Her father and two sisters succumbed to injuries early Thursday morning.  Her mother and 8-year-old sister were treated at a local hospital and have since been released.

Posted by PGFD at 11:48 AM No comments: Links to this post

Prince George’s County and Charles County Firefighters battled a blaze this morning at an Accokeek home.  Just after 8:00 am fire/EMS units were alerted to a house fire in the 14800 block of Berry Road and arrived to find fire and heavy smoke coming from a 1-story, with basement, single family home.  Firefighters from nearby Charles County also operated on the scene of this fire.

Two occupants escaped safely prior to the fire departments arrival, however, the family dog “Coco” could not initially be found.  Firefighters were able to knock down the bulk of the fire within 20 minutes of arrival.  One firefighter sustained a laceration to his hand during operations.  The injury is considered minor.

After the fire was extinguished and secondary searches of the interior were in progress, a Charles County firefighter located Coco in the kitchen, the dog was removed and handed over to an EMS crew that provided oxygen.  The dog, a Shiatsu, is blind and was not able to find his way outside.  After a few breaths of oxygen the dog appeared to be fine and was reunited with his owners.

The cause of the fire is still being investigated, however, the home was found to be void of any working smoke alarms.  A preliminary fire loss is estimated at $100,000.  The family will be displaced and assisted by the County Citizens Services Unit with temporary shelter.

Having a working smoke alarm increases the chances of every living thing in your home surviving a fire by 50%.

Smokes alarms are proven lifesavers.  It is astonishing to firefighters that there are still homes and families not protected by working smoke alarms.  Residents of Prince George’s County can call 311 or 301-864-SAFE (7233) and arrange for a firefighter to visit your home and install a working smoke alarm for you; free of charge. 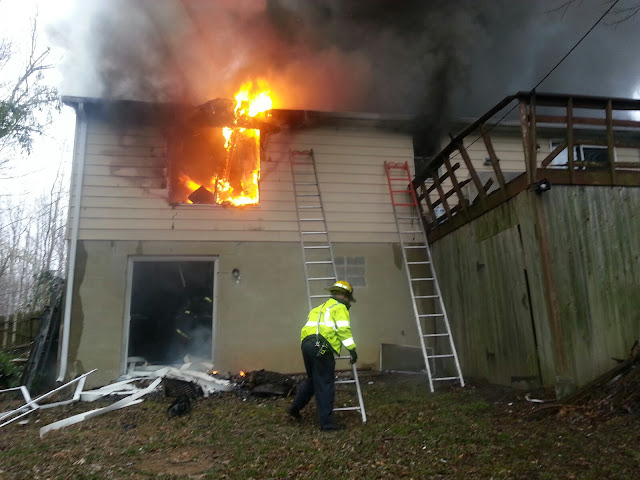 There has been a high demand for smoke alarms within the past few days in Prince George’s County and supplies of the live saving devices are running low.  PEPCO has donated over 10,000 smoke alarms to area fire departments over the past few years and on March 8 will donate additional smoke alarms so that we can continue to provide them free of charge to our citizens.  March 10 is the bi-annual Change Your Clock – Change Your Battery day and firefighter/medics will be out the entire week of March 1 until March 10 going door-to-door to check on smoke alarms and to ensure they have a fresh battery.  Additional information will follow about these events.
Posted by PGFD at 11:12 AM No comments: Links to this post