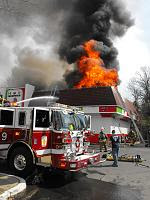 A Riverdale neighborhood convenience and grocery store has been declared a total loss after a late morning fire. At about 11:15 AM, Wednesday, March 25, 2009, Firefighters and Paramedics from the Riverdale/Bladensburg area were dispatched to a 911 report of smoke coming from the roof the LA Consentida Grocery Store at 5401 Kenilworth Avenue in Riverdale. The store was open, operating and occupied. Firefighters arrived and encountered a 1-story, approximately 100’ X 50’, stand-alone commercial structure with heavy smoke issuing from the roof. Firefighters evacuated all employees and patrons of the store and advanced handlines into the structure and started to attack the fire in the ceiling and roof structure.

The fire proved to be a challenge and difficult to access as two layers of suspended ceiling and three layers of roof structure provided large void spaces for the fire to extend horizontally and eventually burning through the roof. Approximately 15 minutes into the fire-fight, amid concerns for Firefighter safety, all personnel were ordered withdrawn from the interior of the building. Master stream, large diameter hoselines, were set up on the exterior of the building and on aerial ladders to provide large volumes of water to extinguish the fire.

A 2ND Alarm was sounded bringing 65 Firefighter/Medics to the scene. The fire was controlled and extinguished in about an hour.

No civilian or firefighter injuries were reported, however, several firefighters were treated in a rehab area established by paramedics after experiencing signs and symptoms of exhaustion.

The cause of the fire remains under investigation and preliminary fire loss is estimated at $500,000.
Posted by PGFD at 3:53 PM No comments: Links to this post