At approximately 9:45 AM, Monday, June 15, 2009, Fire/EMS units from the Forestville and surrounding areas were alerted to a reported house fire in the 6400 block of Pennsylvania Avenue. Upon arrival, units encountered an apartment building with smoke and fire showing from the second floor and roof. A second alarm was sounded and additional units were alerted to assist with the large fire. It took approximately 30 to 45 minutes for the 65 firefighters to bring the fire under control.

Residents of the apartment building will be displaced and will be placed in other units by the Property Management Company. A preliminary fire loss is estimated at $200,000 and the cause is under investigation. One civilian was evaluated on the scene by Paramedics but did not require further medical attention.
Posted by PGFD at 3:18 PM No comments: Links to this post

At around 2:30 AM, Monday, June 15, 2009, Fire/EMS units from the Upper Marlboro and surrounding areas were alerted to a reported house fire in the 100 block of Stan Fey Dr. Upon arrival, units encountered a single family home with fire showing from the second floor and roof. There was a collapse of the second floor and it took approximately 30 to 45 minutes for firefighters to bring the fire under control using an exterior attack.

Residents of the home will be displaced and are making their own arrangements for housing. A preliminary fire loss is estimated at $800,000 and the cause is under investigation. There were no injuries. 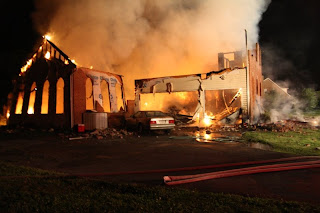 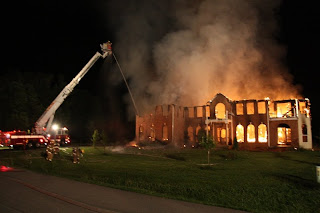 http://www.myfoxdc.com/dpp/news/local/061509_fire_destroys_home_in_upper_marlboro
Posted by PGFD at 10:23 AM No comments: Links to this post