Prince George’s County Firefighters quickly extinguished a fire inside of a Landover Hills home and rescued two pets found inside.  At around 11:15 am, today, a neighbor called 911 and reported smoke was coming from the attic of a home in the 4900 block of 78th Avenue in Landover Hills.

Firefighters from the Landover Hills Fire/EMS Station 830 were the first to arrive and encountered light smoke from the attic of a single family home.  A fire in the kitchen was found after forcing entry into the house.  The fire was quickly extinguished.  The house was charged with high heat and thick smoke with searches yielding no human occupants being located, however, a dog and a cat were removed from the house.  The cat quickly regained her senses once removed to fresh air and appeared fine.  The dog, “Blueberry” – an older Beagle mix, was suffering from burn injuries and smoke inhalation.  The cat was given to a neighbor for safe keeping and the dog was being treated by Firefighter/Medics on the scene, however, “Blueberry” was in need of immediate veterinarian care.  A smaller dog escaped when firefighters entered the home and is being searched for within the community.

After 15 minutes of providing oxygen by Firefighter/Medics to “Blueberry” he showed no signs of improvement and a decision was made that Firefighter/Medics would transport the dog to a nearby veterinarian hospital on Annapolis Road in Lanham.  Veterinarians immediately started to work with Blueberry, as it turns out, is a regular patient at that facility.


The fire caused an estimated $5,000 in fire damage.  Blueberry is expected to make a full recovery thanks to the quick thinking and fast actions of personnel getting him to the appropriate facility.  It's hard enough learning that your home sustained some fire damage, however, there is a huge sense of relief to learn that your family member pets are all OK.

The Prince George's County Fire/EMS Department has partnered with the Anne Arundel County SPCA to set up the Sparky Fire Fund.  When firefighters encounter an injured pet in a home fire that requires immediate vet care and the owner can not be found or does not have the resources to pay for vet care then the "Sparky Fire Fund" would assist in paying a portion of the bills.  Anyone interested in donating to the fund may do so by clicking here.  Be sure you designate the Sparky Fire Fund.  The fund was not needed in this case.

The following images of "Blueberry" being treated by Veterinarians were captured by Andrew Pantelis, IAFF Local 1619 President.  Pantelis and IAFF 1619 Treasurer John Wiseman assisted an ambulance crew in transporting the injured canine to the vets. 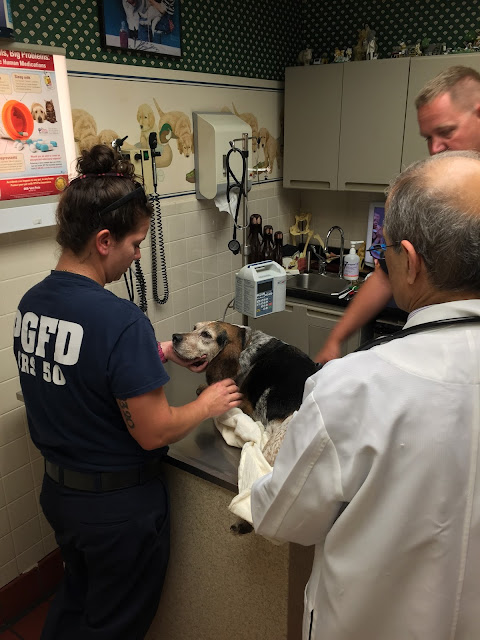 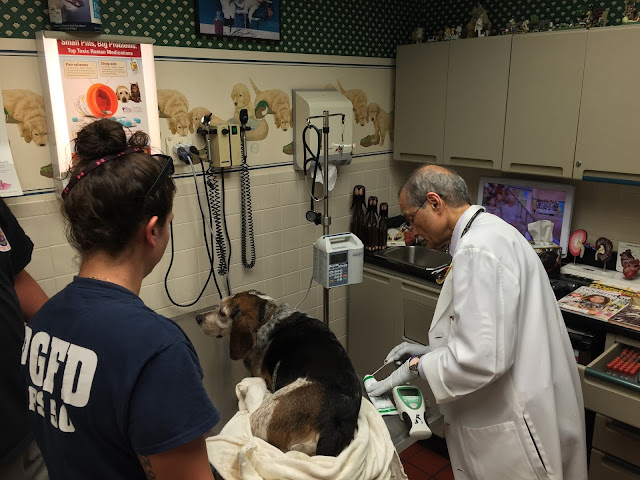 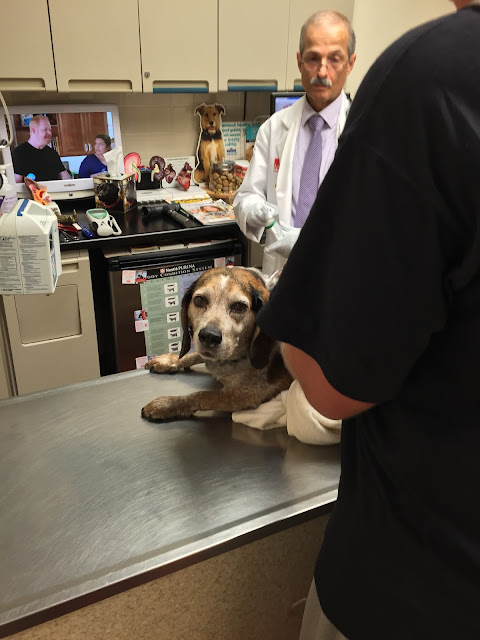 Posted by PGFD at 1:36 PM No comments: Links to this post

For information about the fire contact the Howard County Department of Fire & Rescue Services.

Shortly after 7:00 PM, Sunday, July 12, firefighters and paramedics from the Howard County Department of Fire and Rescue Services (HCDFRS) were alerted by neighbors about a townhouse fire in the 9400 block of Riverbrink Court in Laurel, Maryland.  Several neighbors called 911 to report seeing smoke and flames coming from the basement at the rear of the structure.

Crews arrived to find heavy fire coming from the rear of a 2-story end-unit townhouse with a walk out basement.   More than 50 firefighters from HCDFRS and the Prince George’s County Fire/EMS Department (PGFD) were on hand to extinguish the blaze.  PGFD units included Laurel #810, Calverton #841, a Medic Unit from Laurel and several command officers.  It is common practice for neighboring jurisdictions to share mutual aid fire/EMS apparatus if they are closest to the incident location.

The fire was declared under control approximately 45 minutes later.  Interior firefighting operations were hampered because the extensive fire caused significant structural damage, and large portions of the first and second floors were deemed unsafe.

Prince George’s County Fire Captain Donald Fletcher was ascending a flight of interior stairs when they collapsed underneath him.  He initially saved himself falling into the collapse area of grabbing onto a superheated stair rail and holding on until other firefighters pulled him to safety.  Fletcher sustained burn injuries to both hands and was transported to the Burn Unit at MEDSTAR Washington Hospital Center.  He was treated and released last night and is currently resting at home.  While it is never good to sustain a burn injury on the fire ground we are fortunate to be only reporting a treat and release burn injury and nothing more serious.  Captain Fletcher’s initial reaction to grab a handrail while falling and other firefighters pulling him to safety is a testament to firefighters training and situational awareness.  Fletcher is a 10-year veteran of the Fire/EMS Department and is assigned to the Calverton Fire/EMS Station #841.  There have been no civilian injuries.

No one was home when the fire began.  Red Cross is providing assistance.  HCDFRS fire investigators are conducting an investigation to determine the origin and cause of the blaze.