Posted by PGFD at 10:00 PM No comments: Links to this post

Arrest Made in Vehicle Arson

Prince George’s County Fire Investigators arrested an individual today, Thursday, March 13, 2014, and charged him with the crime of Arson.  Fire Investigators obtained a warrant for Marcus Anthony Jackson, 27 years of age, of Washington, DC.  The warrant charges him with Arson in the 2nd Degree and Malicious Burning with intent to Commit Fraud.  These charges stem from a fire involving Jackson's vehicle, a 2006 Dodge Charger, that he is alleged to have set on fire January 23, 2014, at about 11:45 pm.  The incident occurred in the 1200 block of Farmingdale Road in Capitol Heights, MD.

Jackson reported the vehicle stolen in the District of Columbia and filed a claim with his insurance company.

At approximately 1200 pm today, Marcus Anthony Jackson turned himself in to Investigators from the Prince George’s County, Office of the Fire Marshal.  He was processed at the District I processing facility, Hyattsville,and is currently awaiting a bond review hearing in front of a District Court Commissioner.

Jackson is a Firefighter with the District of Columbia Fire/EMS Department assigned to Engine 4.

Malicious Burning/Fraud, a Misdemeanor, is punishable by up to 5 years in jail and/or $5,000 in fines and penalties.

Posted by PGFD at 5:24 PM No comments: Links to this post

Just after 10:30 pm, Wednesday, March 12, 2014, Firefighters from Glenn Dale, Bowie and West Lanham Hills Fire Stations as well as other nearby stations were alerted to a house fire.  Fire/EMS units arrived at a 2-story single family home in the 12500 block of Guinevere Road in Glenn Dale to find heavy fire on the second floor.

A rapid search confirmed that all occupants were out of the house and firefighters commenced with extinguishment efforts.  The fire was well advanced and a partial collapse of a portion of the 2nd floor required firefighters to evacuate the structure and continue the fire fight from the homes exterior.  High winds are believed to have contributed to the rapid fire spread throughout the structure.  Incident commanders were concerned about possible extension to homes on either side from the radiant heat and wind.  An additional collapse of the roof confirmed the correct decision to remove all personnel from the structure early in the incident.

Master stream devices were set up and the bulk of the fire was extinguished in about an hour.

With the advice of Safety Officers crews approached the structure and completed extinguishment using hand lines.

Firefighters were able to protect the adjacent structures from any radiant heat damage.

The family escaped with time to spare thanks to an activated smoke alarm.  An unattended candle in a second floor bedroom ignited combustibles.  The fire started to grow in intensity and smoke set off a nearby smoke alarm.  The family quickly evacuated the home and was not injured.

No firefighter injuries were reported.

The fire is listed as “accidental” and fire loss estimated at $150,000.  The family was displaced. 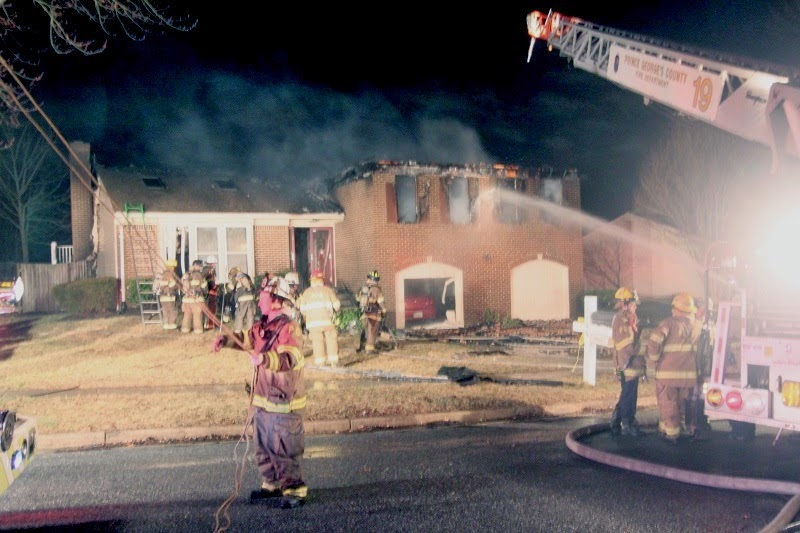 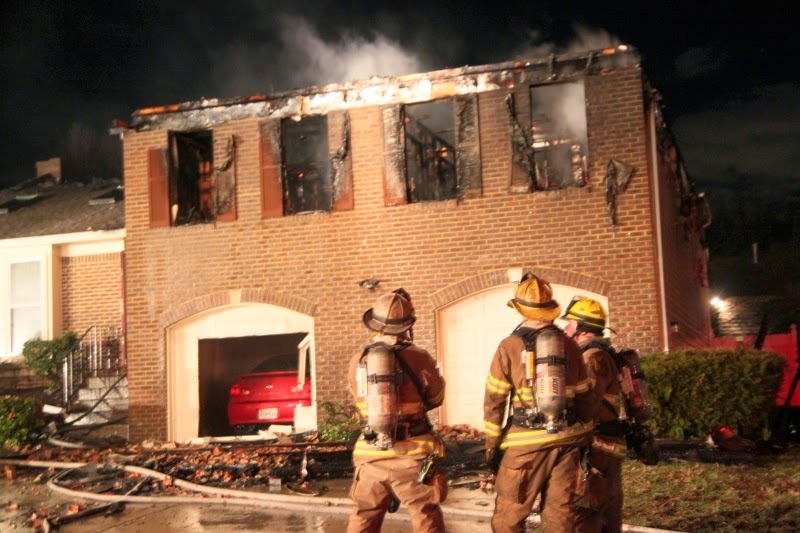 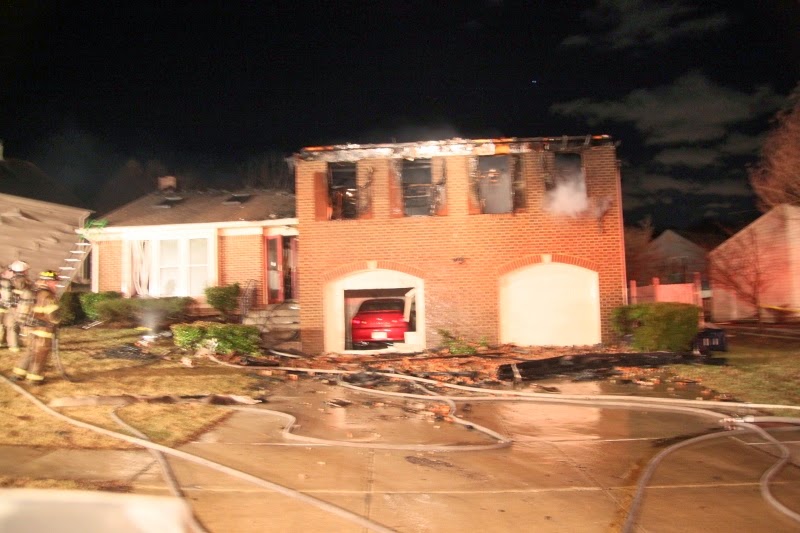 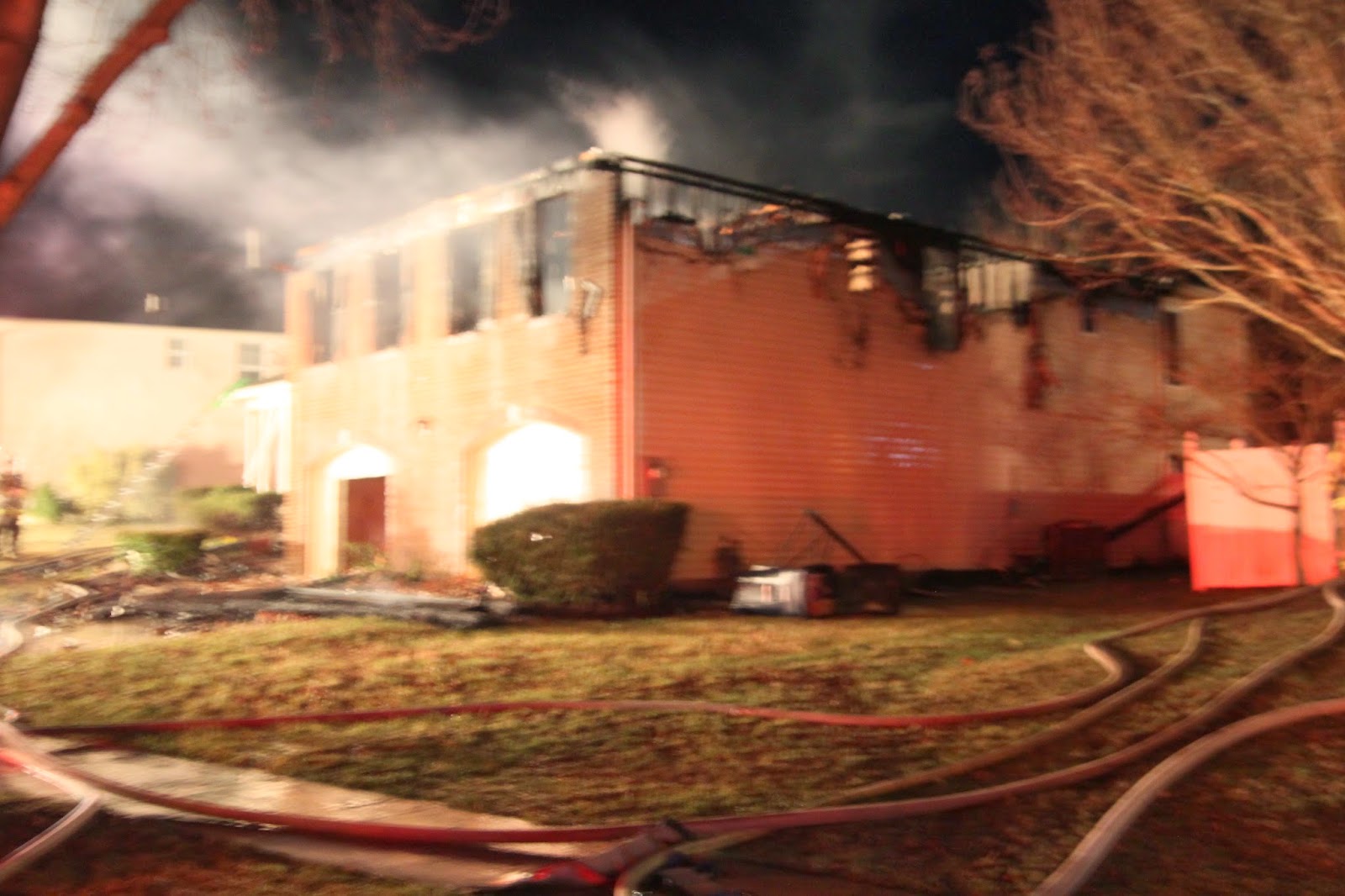 Posted by PGFD at 4:50 PM No comments: Links to this post

One firefighter and three civilians, including a 5 year old child, were injured during a Hyattsville house fire this morning.  At about 9:15 am, Thursday, March 13, 2014, firefighters from Bunker Hill, Hyattsville and several other nearby stations were alerted to a house fire in the 5000 block of 38th Avenue with people trapped in the house.

Firefighters arrived at the split-level single family home with fire showing from the rear of the house.

A rapid search of the entire house was completed with negative results.  There were 2 adult males and a 5-year-old male that were in the home when the fire started and were able to escape before the Fire Departments arrival.  All three sustained minor injuries escaping their burning home.

The three occupants were transported to a local hospital for treatment of minor injuries.

One firefighter sustained burns to an ear.  He was transported and treated at the Burn Unit at Medstar Washington Hospital Center.  He was released early this afternoon.

It is believed that high winds today aided in the rapid advancement of the fire from the area of origin in the rear of the house through the front of the house.


The fire was extinguished with 25 minutes of arrival.  The cause of the fire remains under investigation with fire loss estimated at $50,000. 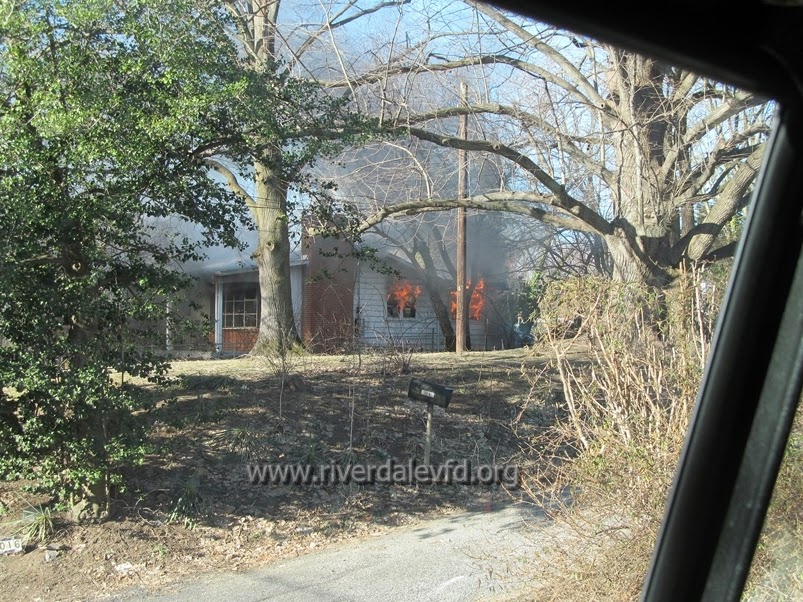 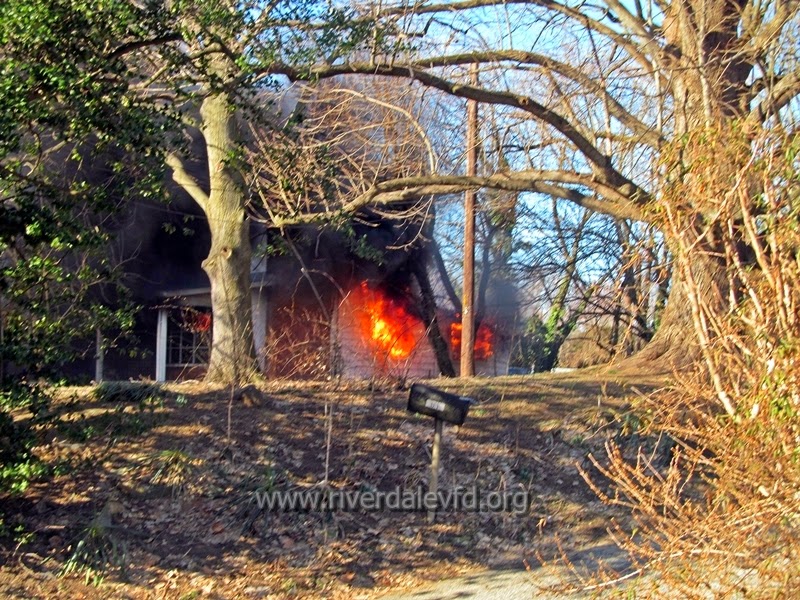 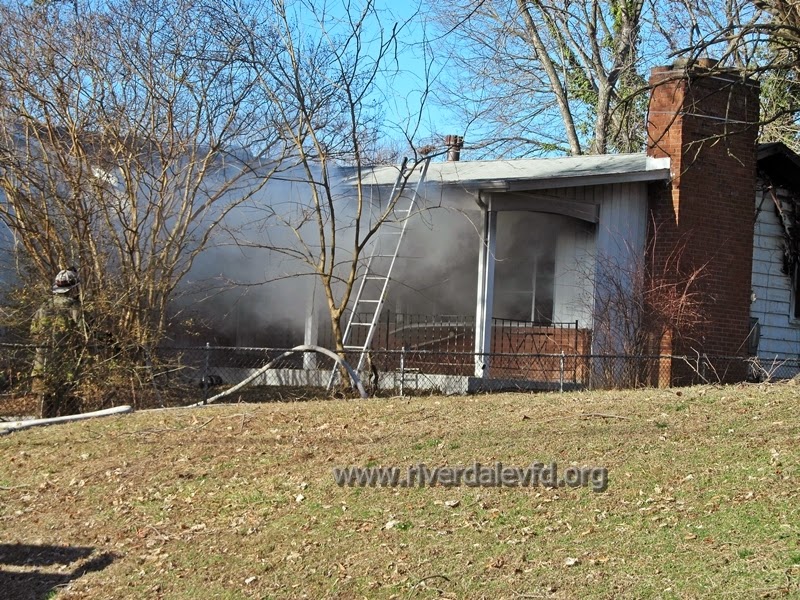 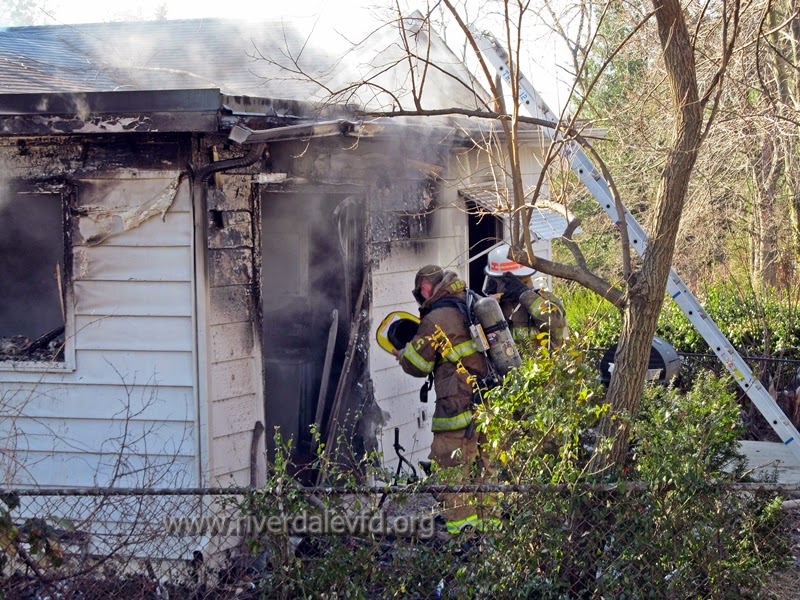 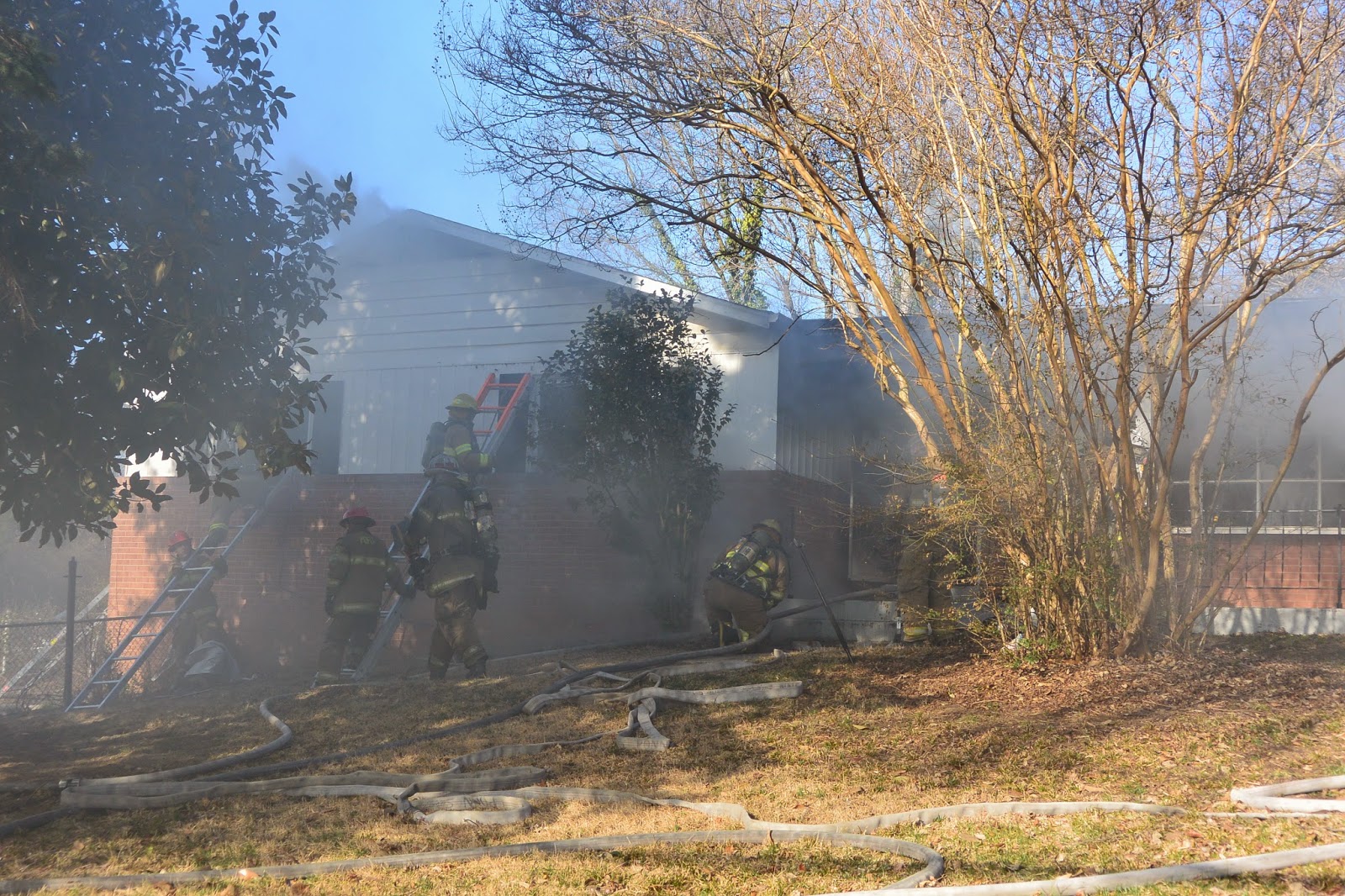 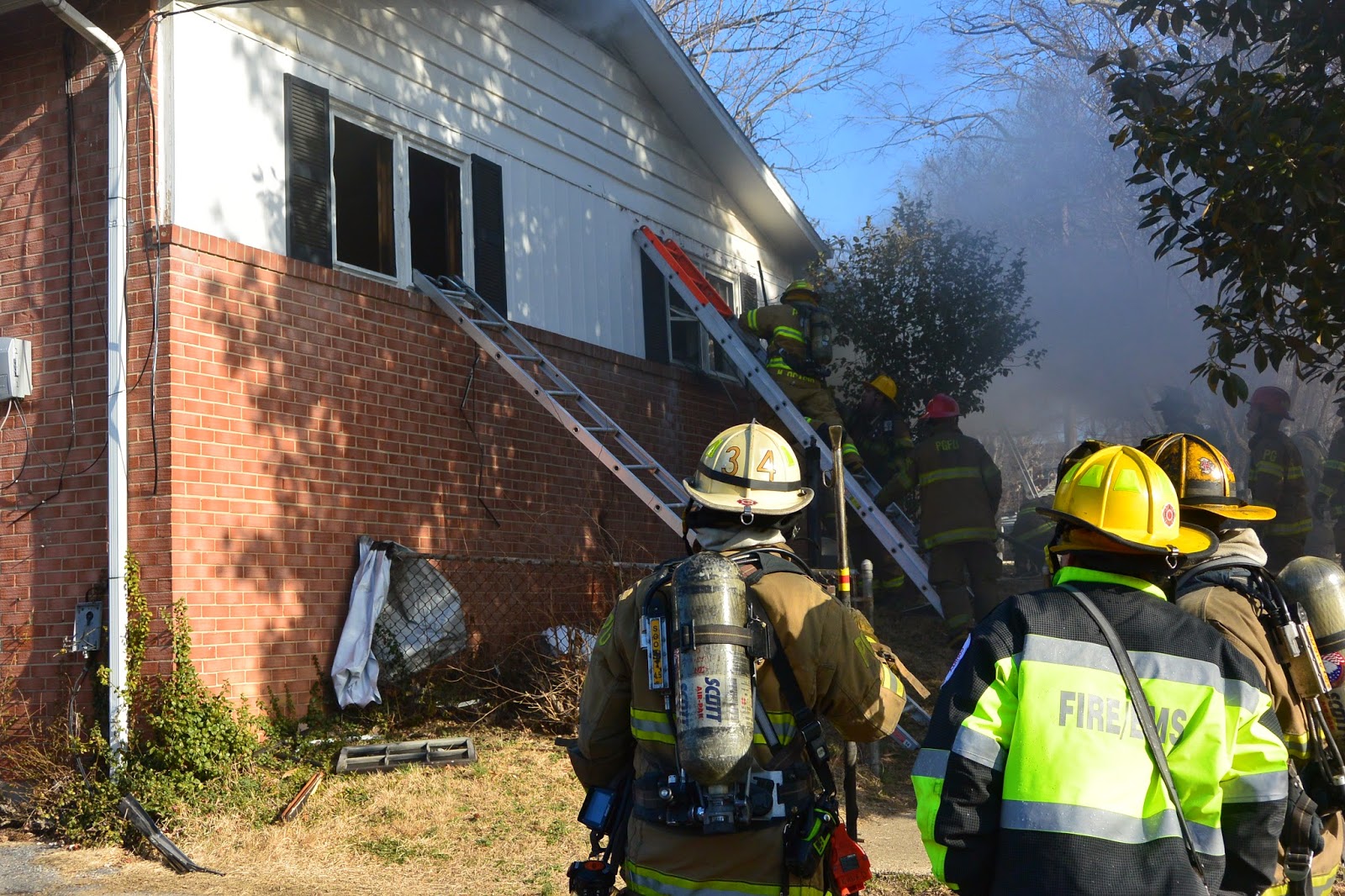 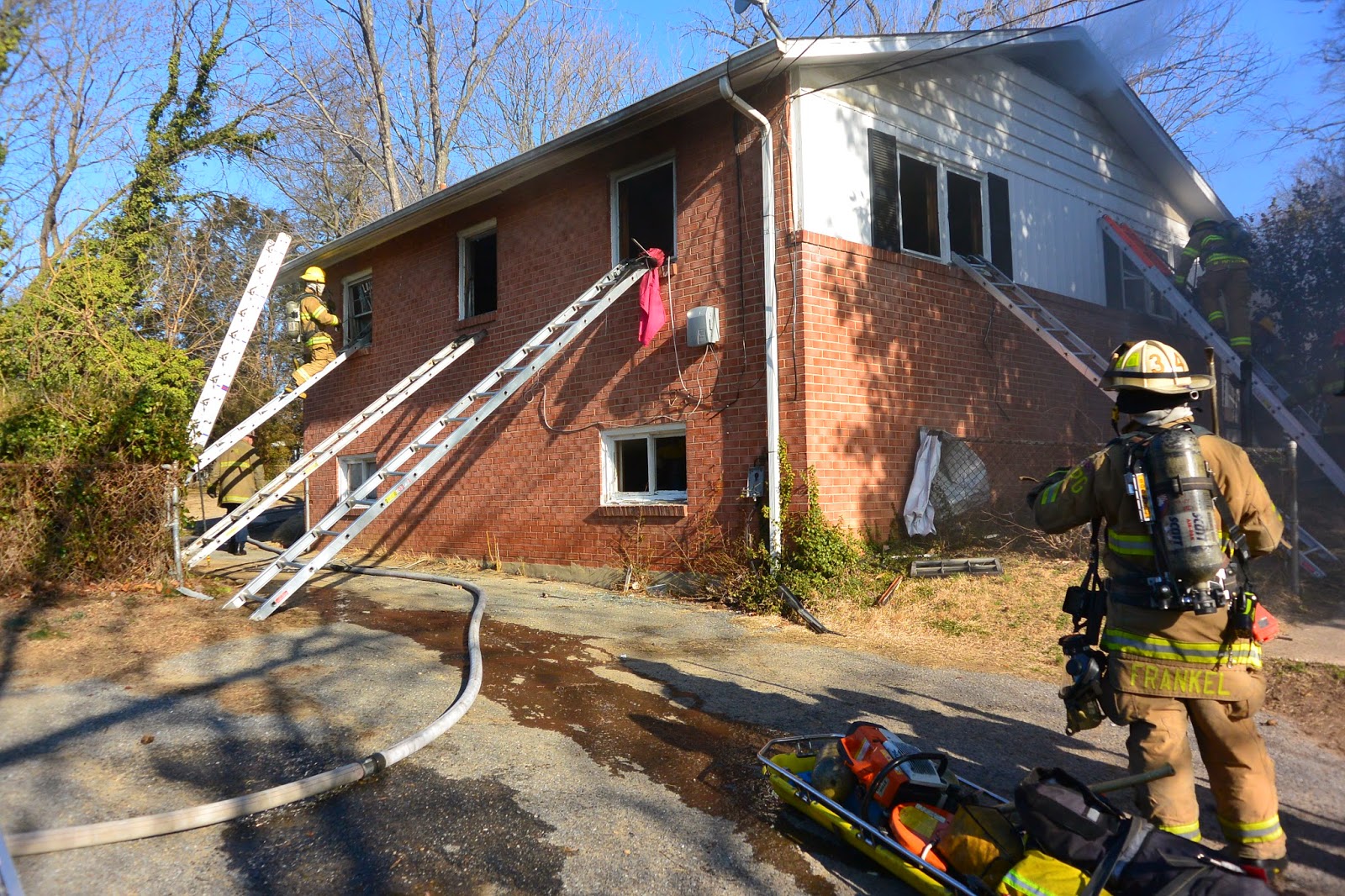 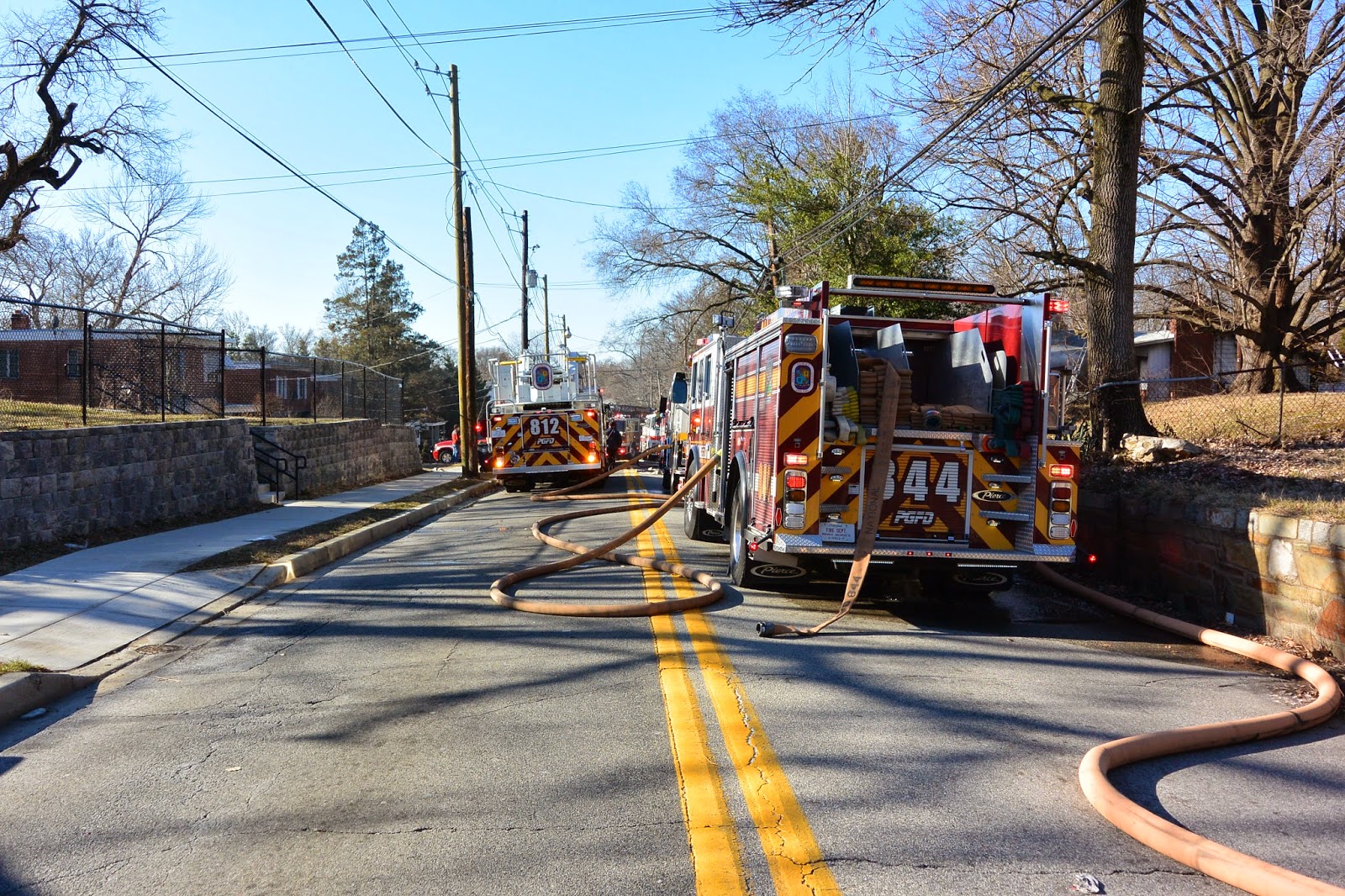 Posted by PGFD at 4:21 PM No comments: Links to this post

A Prince George’s County Firefighter was injured this morning after falling through a hole in the floor while fighting a fire in Mitchellville.  At about 6:30 am, Thursday, March 13, 2014, firefighters from the St. Josephs Fire/EMS Station along with 6 additional nearby stations and incident commanders were alerted to a building fire on the grounds of the Maryland National Capital Park and Planning Commission property in the 2900 block of Enterprise Road.  This sprawling complex is occupied by the Enterprise Golf Course, Newton White Mansion and the Maryland Park Police Mounted Unit.

Firefighters from St. Joes were the first to arrive and encountered a 1 ½ story building used as a storage facility and locker room for the Police Mounted Unit Officers with fire and smoke showing from the roof area.  With the amount of fire and smoke coming from the relatively small structure, the engine officer, Fire Fighter/Medic Lieutenant Brian M. Gibson, instructed his crew to advance a hand line and start knocking the fire down from the safety of the exterior.

With the majority of the fire visible from the exterior knocked down, Fire Lt. Gibson requested permission to advance into the interior and asses conditions.  Having received an acknowledgement from the incident commander, Lt Gibson proceeded inside by way of the front door.  Only seconds after receiving an acknowledgement to proceed to the interior and just feet inside the front door Gibson fell through a hole created by the fire and fell into the basement.

In a controlled and calm voice, Gibson used his portable radio to announce a MAYDAY and provided the incident commander of his location, his unit number, name, air supply and resource’s needed.  Gibson, remaining calm throughout the entire ordeal, asked for a rope to be dropped down to the basement and he repeated his location.  Fellow firefighters immediately responded to his call for help.

There was no exterior door or access to the basement from the outside and finding a stairwell was not an immediate option.  A ground ladder off one of the engines was used to drop down the same hole he fell through which provided Gibson a quick means of egress from the basement.  Additional firefighters had arrived and continued an exterior extinguishment of the fire while the rescue was in progress.

Within an anxious few minutes Fire Lt. Gibson was rescued and being tended to by paramedics.  Complaining of back pain he was transported to Prince George’s Trauma Center.

The fire was extinguished by the 30 firefighters on the scene within 45 minutes from the exterior of the structure.  Hand lines and a master stream device from an extended tower ladder completed the extinguishment.

Fire Investigators are still working on the exact cause of the fire, however, they seemed to be focused on a propane heater in the basement.  The area of origin is where the heater was hung from the ceiling in the basement.  It appears the direct flame impingement from the heater on a metal grate and basement celling created the hole in which Gibson fell through.  The fire extended through the first floor, and up into the attic area.  The preliminary cause is listed as accidental; however, the investigation remains open.  Fire loss is estimated at $25,000.

At the Trauma Center, Fire Lieutenant Gibson was found to have suffered a compression fracture in the T-7 thoracic vertebra of his back.  He is currently resting comfortably at the hospital and is surrounded by family, co-workers, personnel from St. Joes Fire/EMS Station, friends and members of IAFF Local 1619.

Fire Fighter/Medic Lieutenant Brian M. Gibson is 39 years-of-age and has been a member of the Prince George’s County Fire/EMS Department for nearly 14 years. 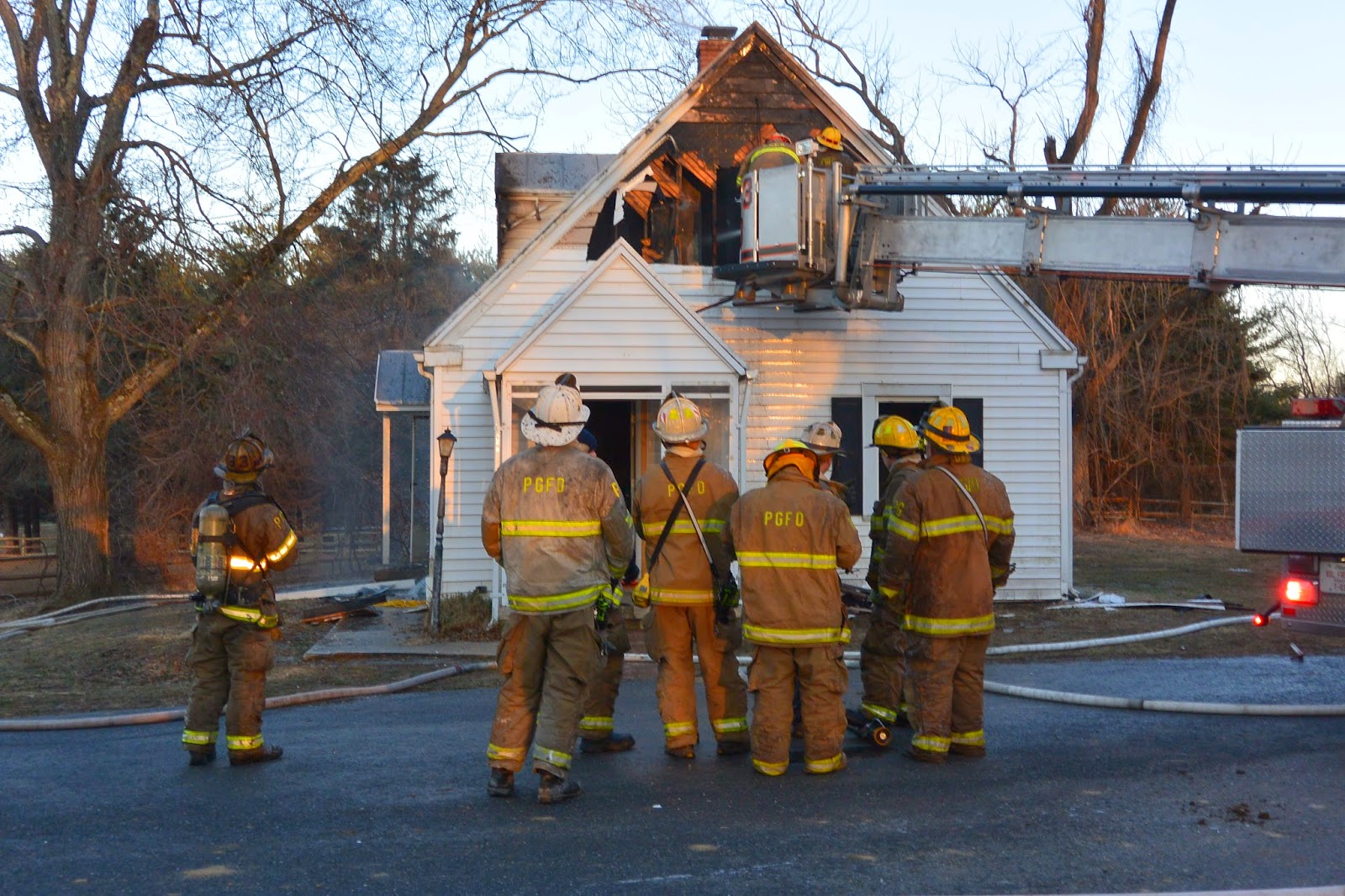 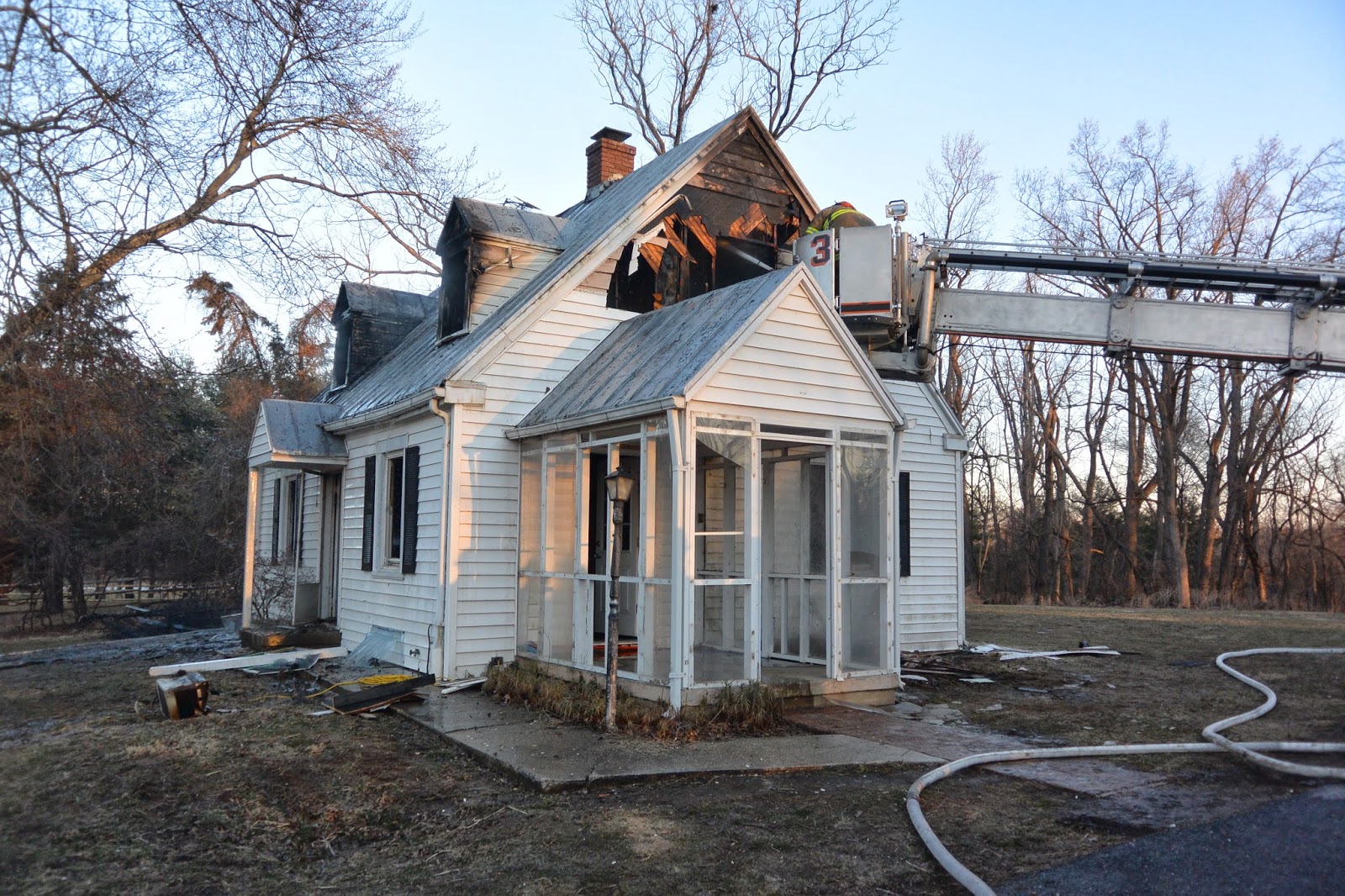 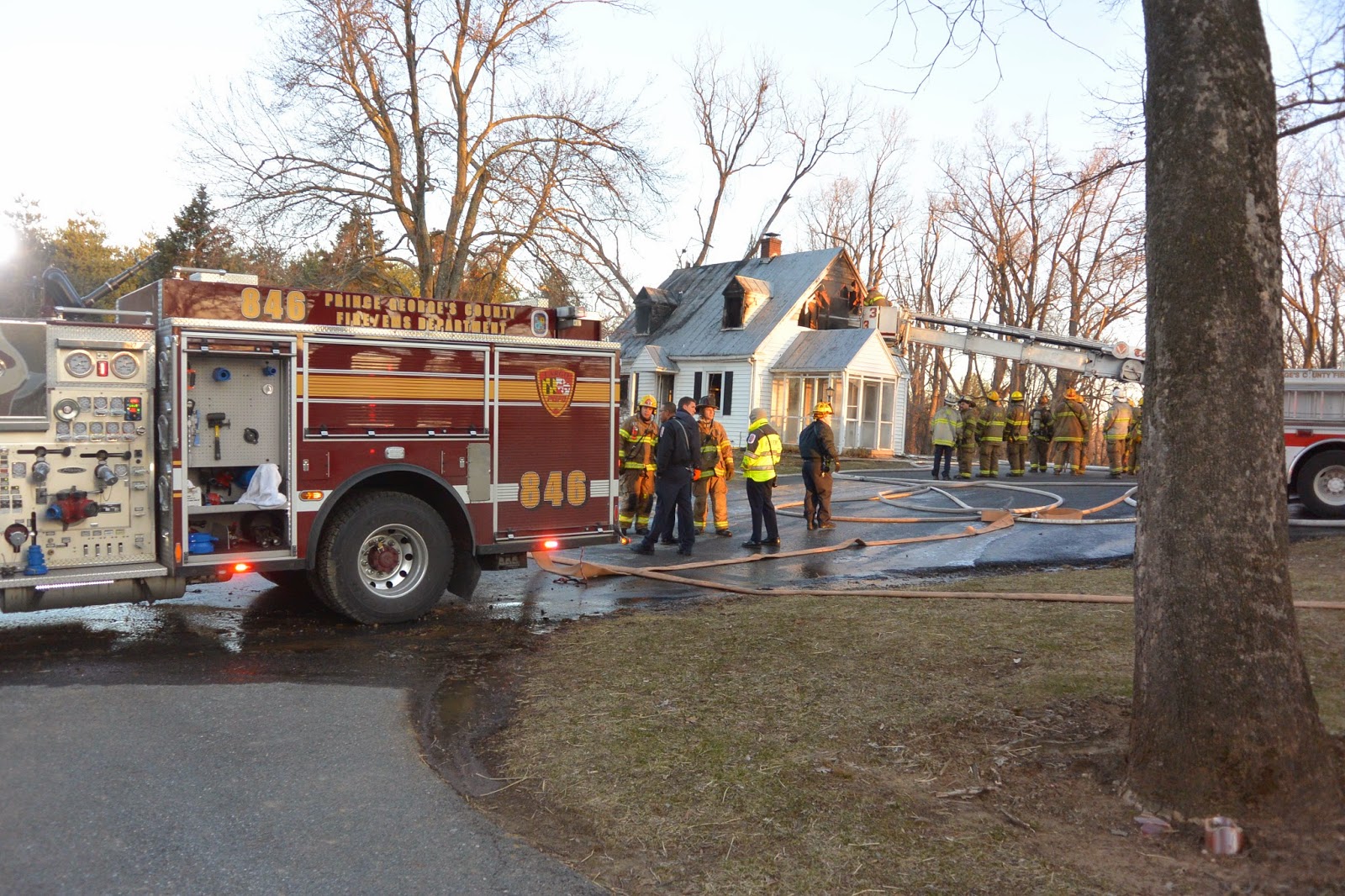 Posted by PGFD at 3:38 PM No comments: Links to this post