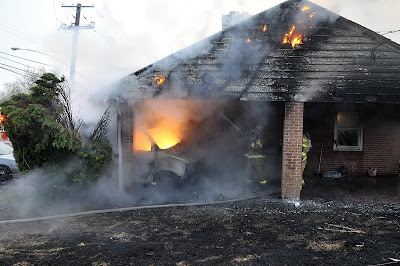 A Beltsville home suffered $85,000 in estimated fire loss and displaced 6 residents. On Thursday, March 11, 2010, at about 5:30 PM, firefighters from the Beltsville Fire/EMS Station #831 arrived quickly to a 1-story single family home with heavy fire consuming an attached carport with smoke issuing from the entire roof. First arriving firefighters made fast work of knocking down the bulk of the fire and continued to check for extension. High heat and thick smoke filled the house and damage indicated it was just moments away from a flashover. The firefighter’s quick arrival and teamwork of performing coordinated ventilation and extinguishment were successful in limiting fire damage to the interior of the home.


Four adults and two children are displaced from the home and receiving assistance with temporary shelter from other family members. Fire Investigators have labeled the cause of the fire as “accidental” and is attributed to mechanical work to a van parked partially under the carport.

In addition to the Beltsville Firefighters, Fire/EMS units operating at the scene included Calverton, Branchville, Berwyn Heights, College Park and Burtonsville (Montgomery County). There were 35 firefighters that required 20 minutes to extinguish the fire. No civilian or firefighter injuries were reported.
Posted by PGFD at 8:59 AM No comments: Links to this post