Firefighters searched eleven apartments and found that all occupants had escaped safely.  The fire was located and quickly extinguished.  There was some extension to the apartment above on the 1st floor that was also extinguished.  Fortunately, no civilian or firefighter injuries were reported.

11 apartments in the building of origin will be displaced mostly due to the loss of electric and gas utility services.  An attached apartment building, 11 apartment units, may also be displaced if the utility services cannot be isolated to just the one building.  If both buildings remain without utilities than as many as 50 occupants could be displaced.  The County Citizens Services Unit and the American Red Cross are working with apartment complex management to assist the displaced occupants.

Fire Investigators believe a juvenile male under the age of 10 started the fire.  The child was cited and released to the custody of his parents.  Investigators will work with the family by providing referral services for juvenile fire setting.  Fire loss for the building and contents is estimated at $50,000.
Posted by PGFD at 9:19 PM No comments: Links to this post

Several firefighters were presented with certificates today in recognition of their efforts in extinguishing a fire at the National Archives in College Park.

The event was held at the impressive and beautiful National Archives in College Park and included dozens of employees along with career and volunteer firefighters in the audience.  Kevin A. McCoy, Director, Security National Archives and Records Administration at the College Park Facility opened the awards ceremony and said;

I want to welcome all to this presentation this morning, especially those who will receive special recognition on behalf of The Archivist of the United States David Ferriero, and Chief Operating Officer Jay Bosanko.


To begin this ceremony, please allow me to Quote President George W. Bush at a ceremony honoring fire fighters after 911:

“Fire-fighting is a hard and demanding job.  And it may at any moment send a person to the high heat or thick smoke.  It's been said that a firefighter's first act of bravery is taking the oath to serve.  And all of them serve, knowing that one day they may not come home.”

We at the Archives are the stewards of some of our Nation’s most importing holdings in this Archives building and without your quick response those holdings may have been put at risk.
These certificates and challenge coins we present here today represent our gratitude for your bravery and service to not only our agency, but the occupants of this facility, and members of our county, state and nation as a whole.

“On September 16, 2014, in less than 7 minutes, Engine 811, Truck 812, Truck 814 and Engine 834 arrived at the National Archives and Records Administration (NARA), College Park in response to our 9-1-1 call. The array of career and volunteer Fire Fighter and Paramedic crews quickly and effectively engaged and extinguished the multiple car blazes in the parking structure. The cohesive efforts of all responders resulted in limiting damage to only 4 vehicles, when the potential existed for over $16,000,000 in loss. Your personal contribution to the team effort was instrumental in preventing this incident from becoming a catastrophic event and reflects great credit upon yourself, your Station, Company and Battalion. The preservation of life and property at NARA is a direct result of dedicated people like you serving our country in extraordinary ways.  Your exceptional performance is sincerely appreciated and we wish you the best in your future endeavors." 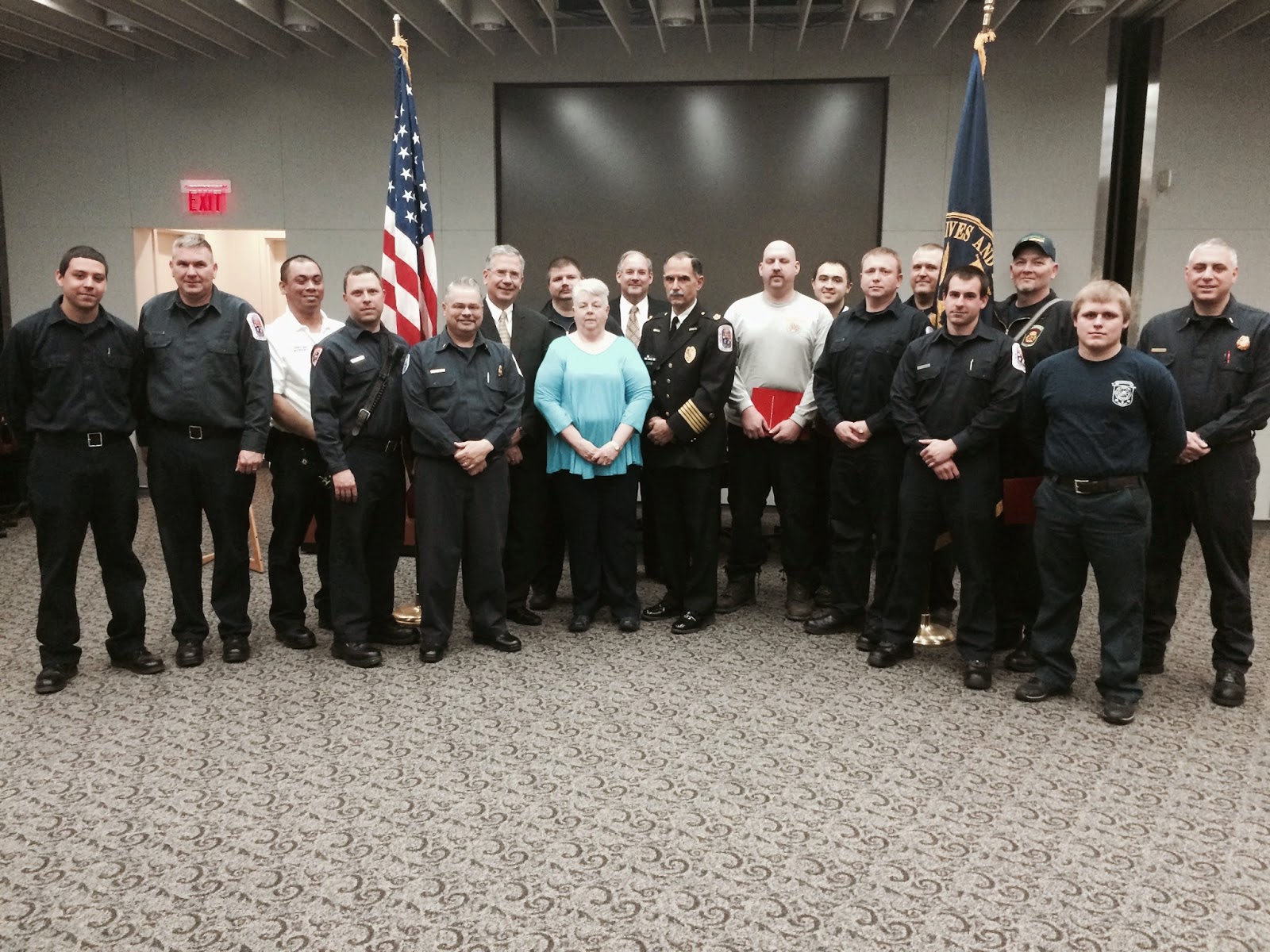 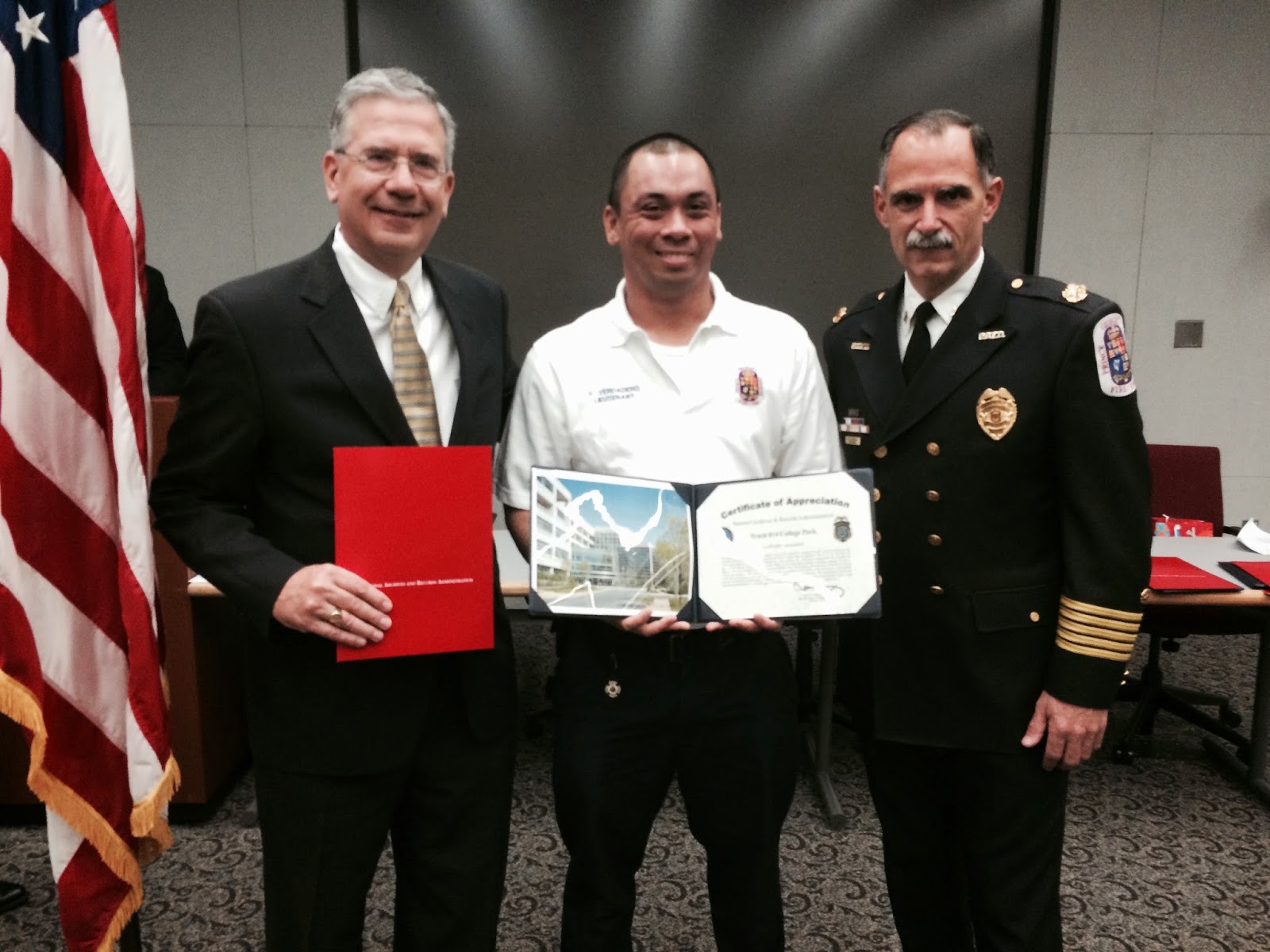 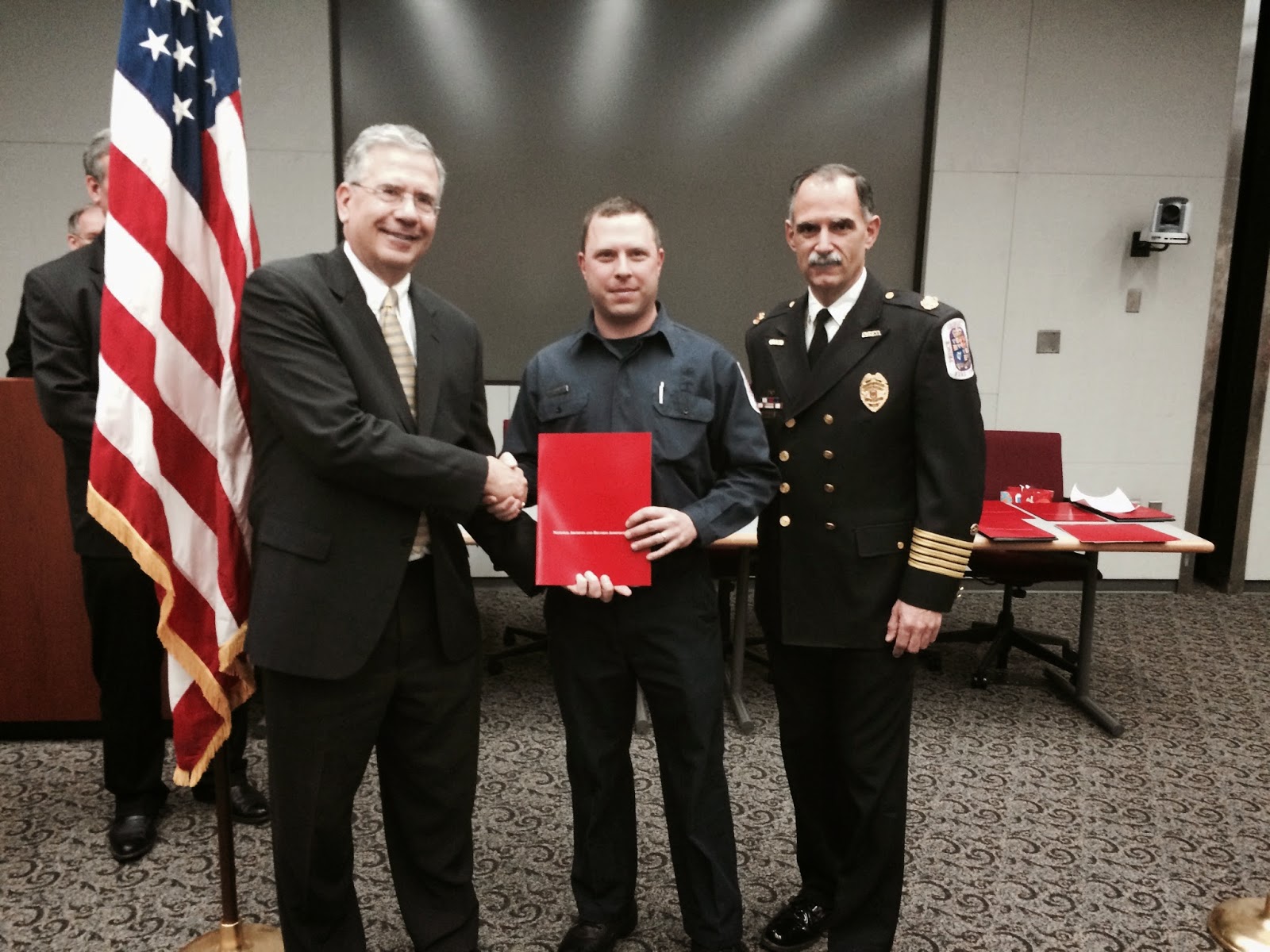 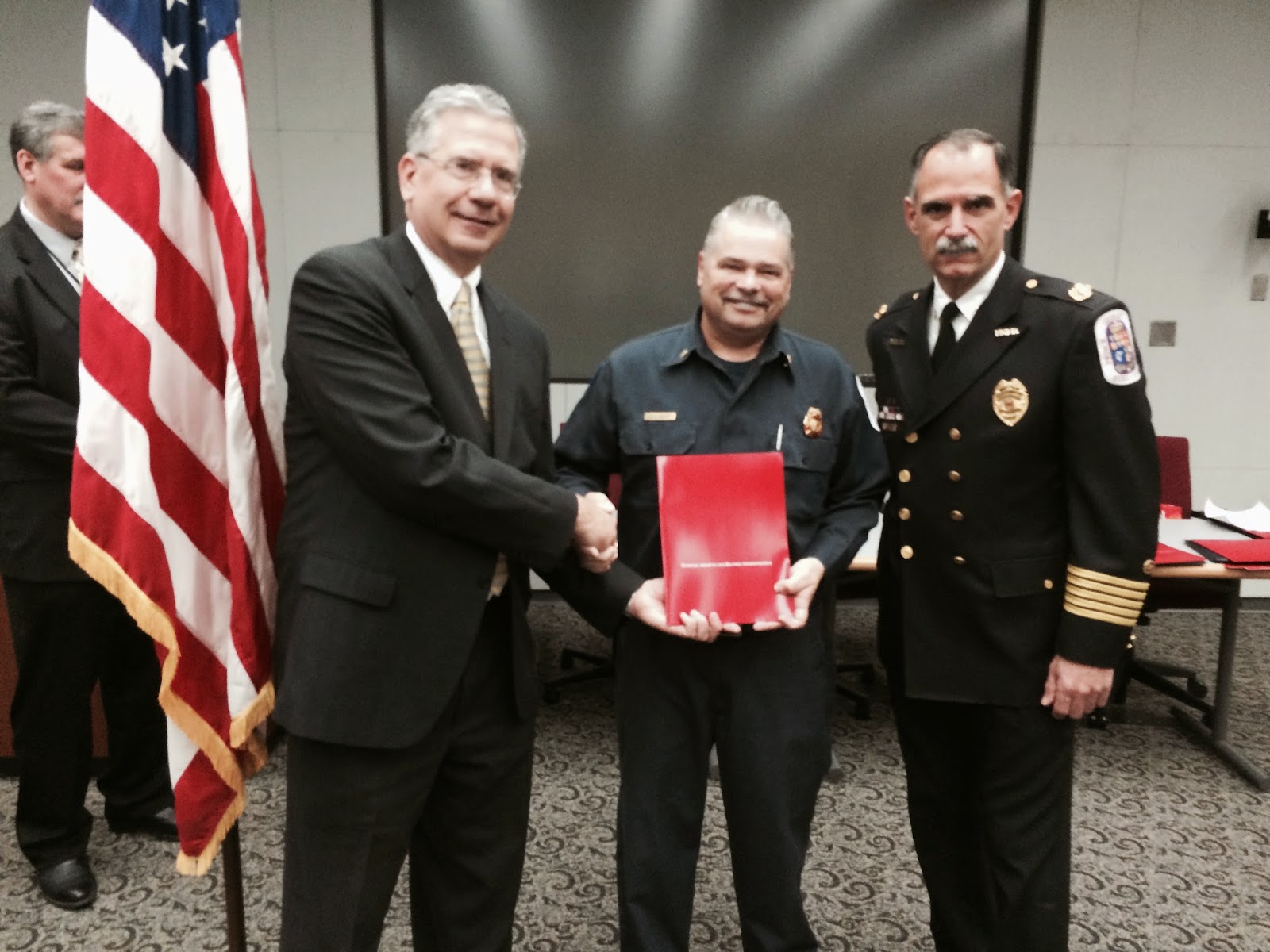 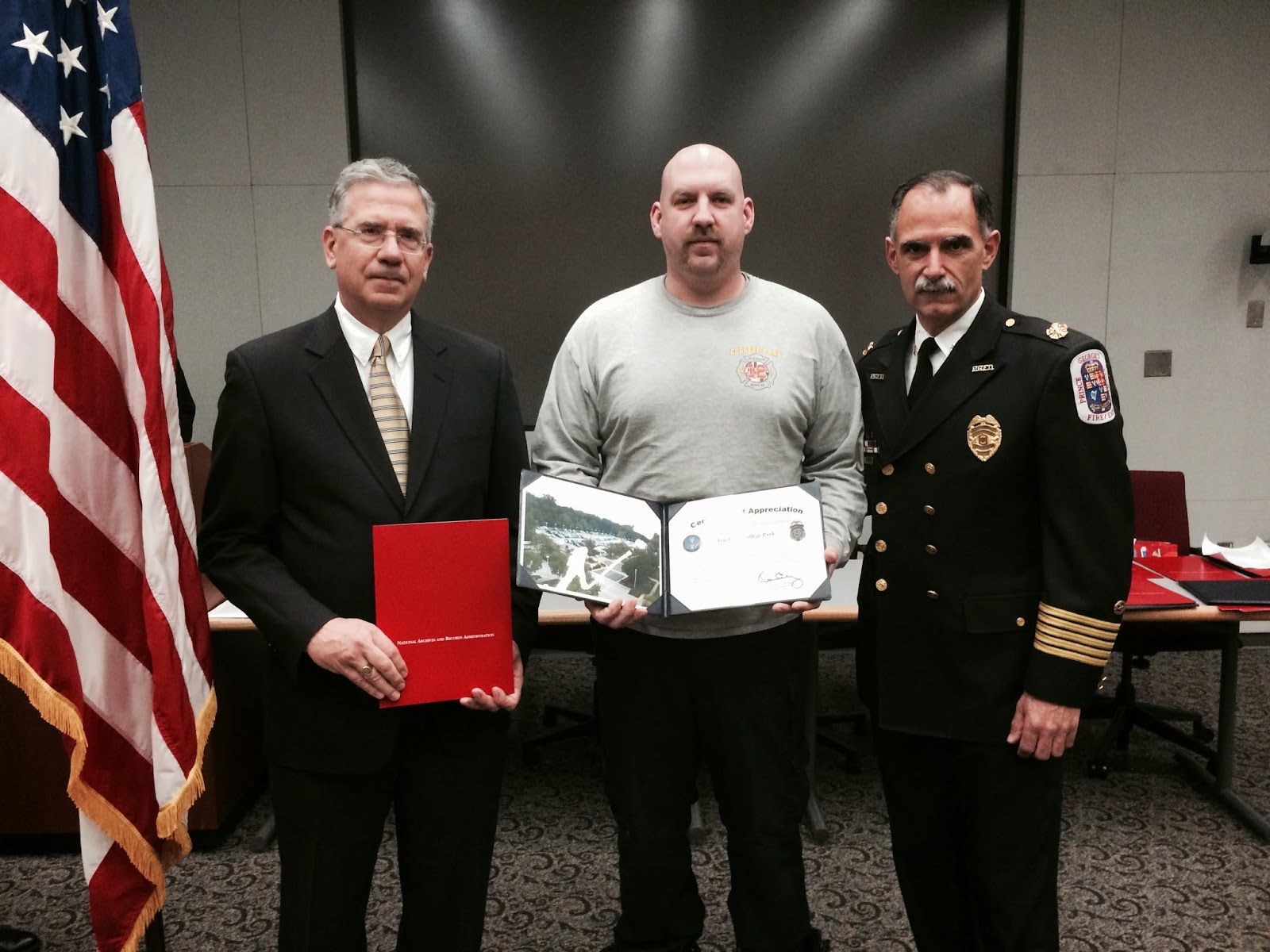 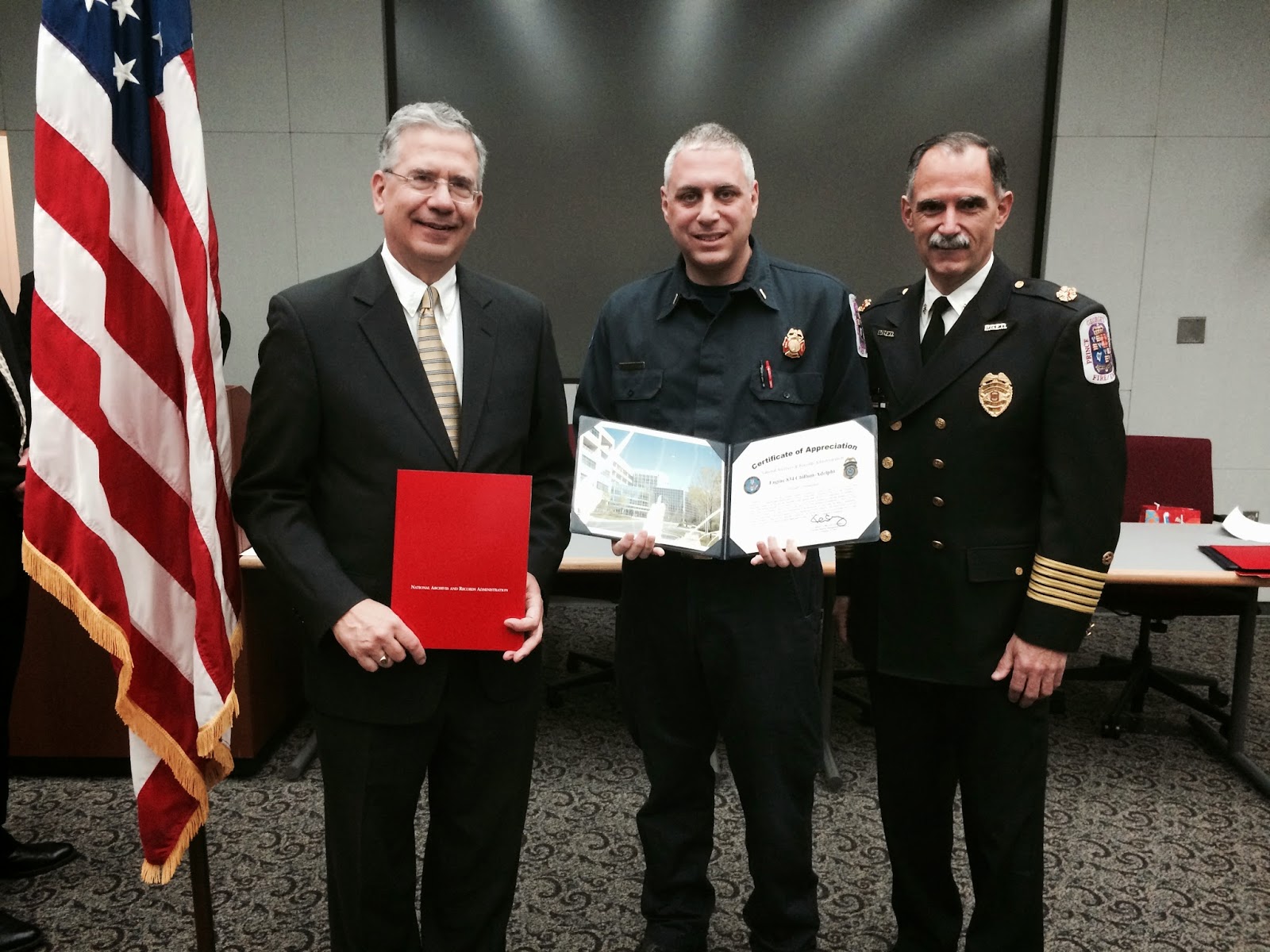 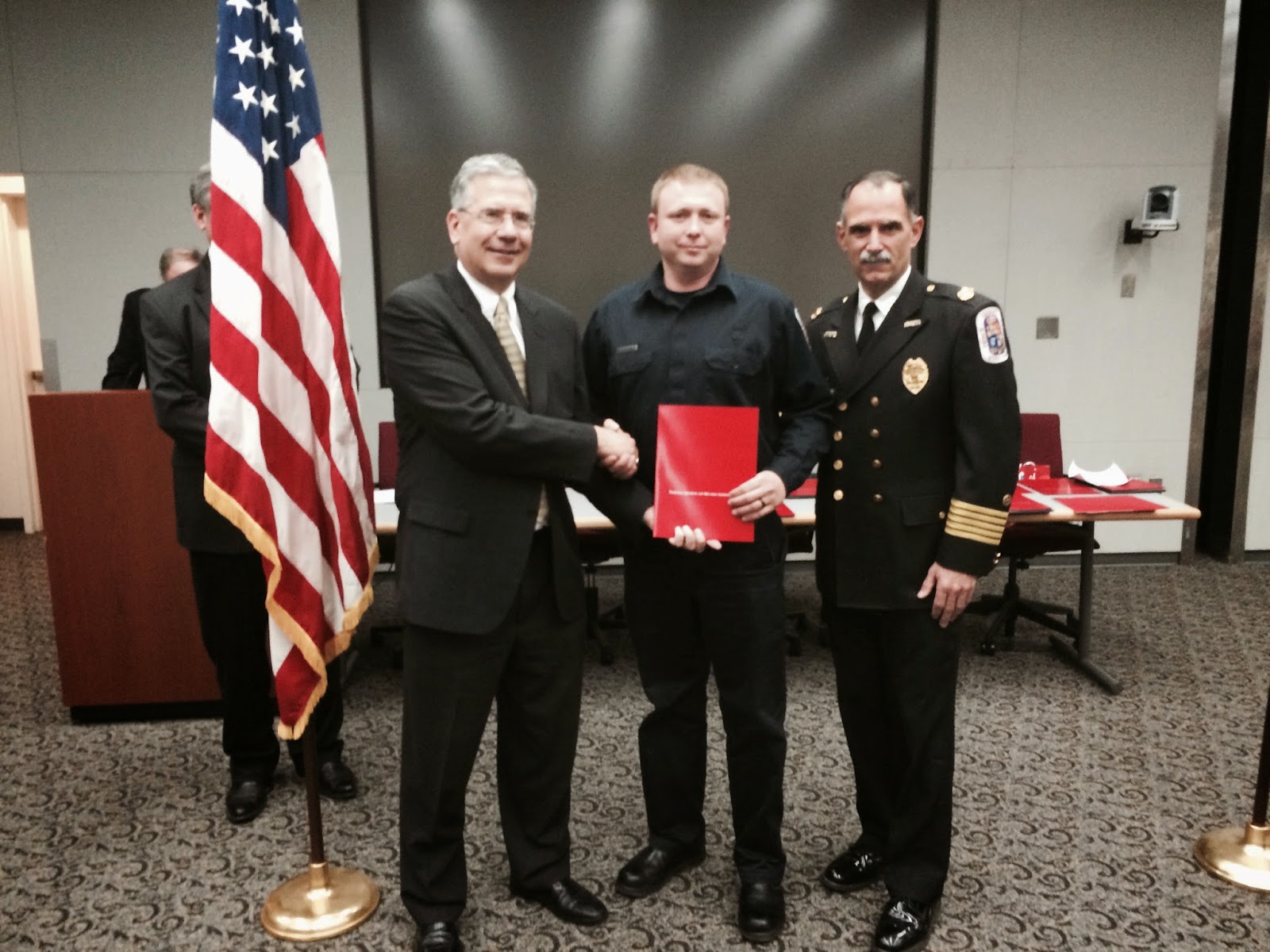 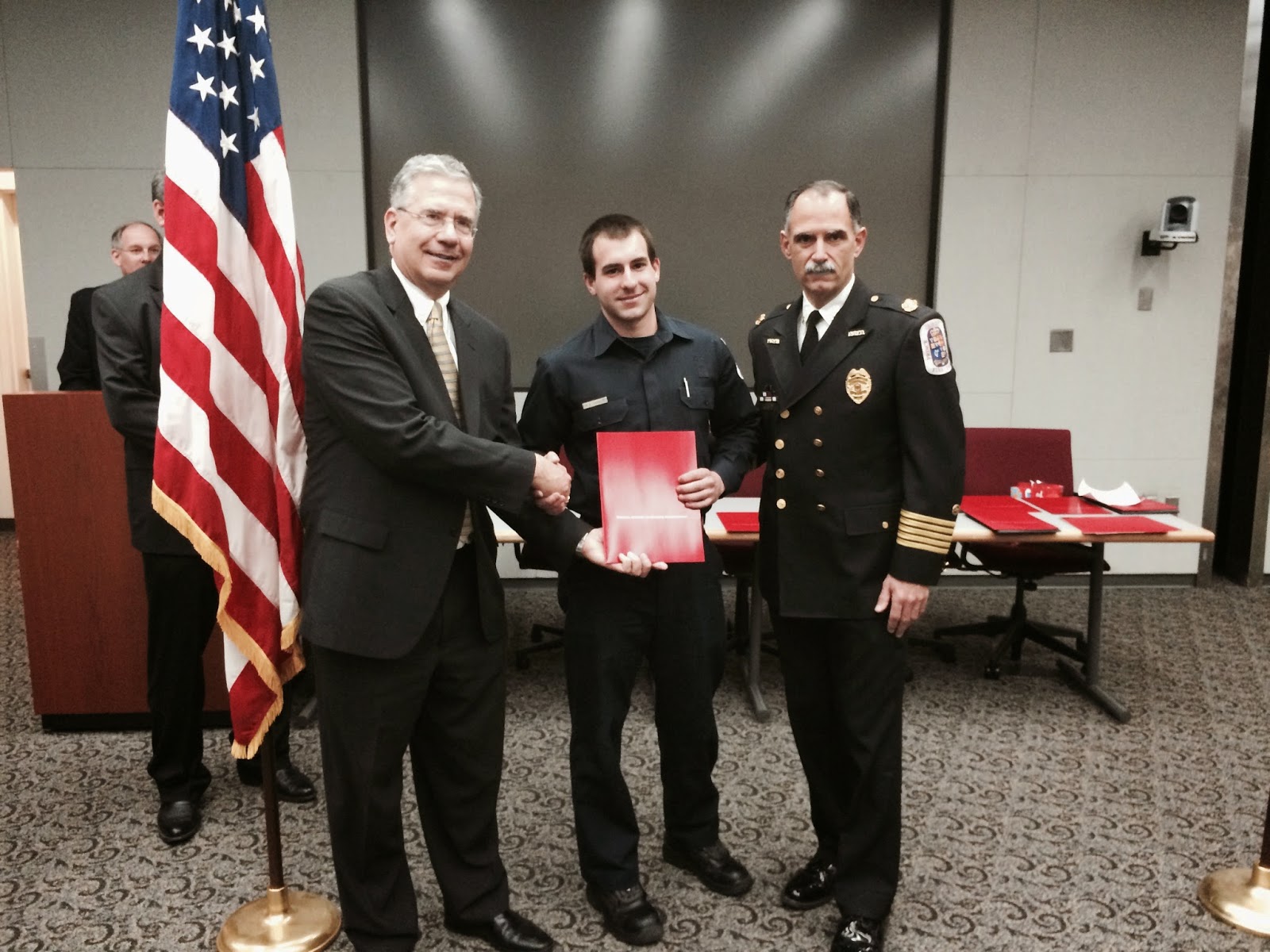 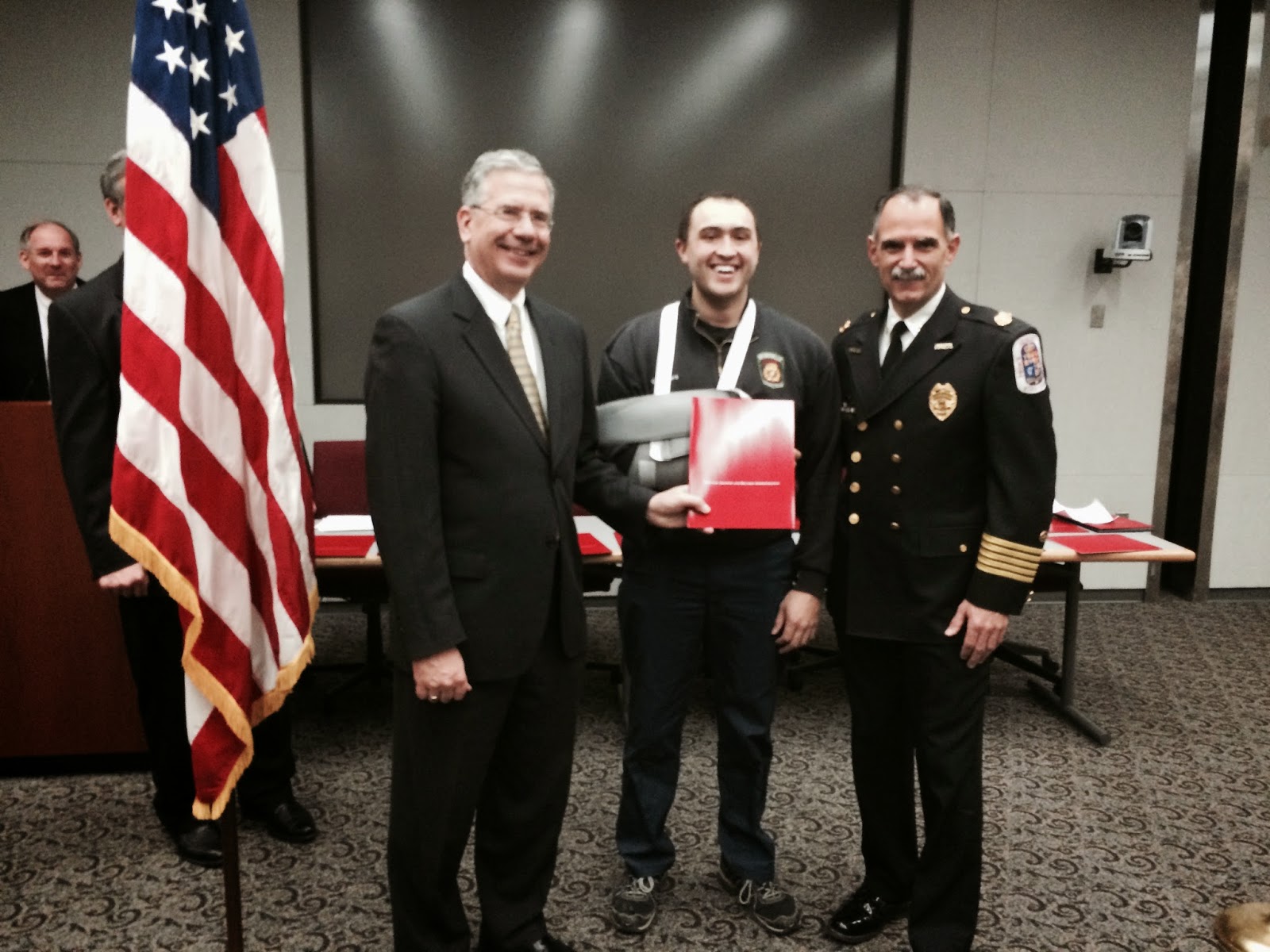 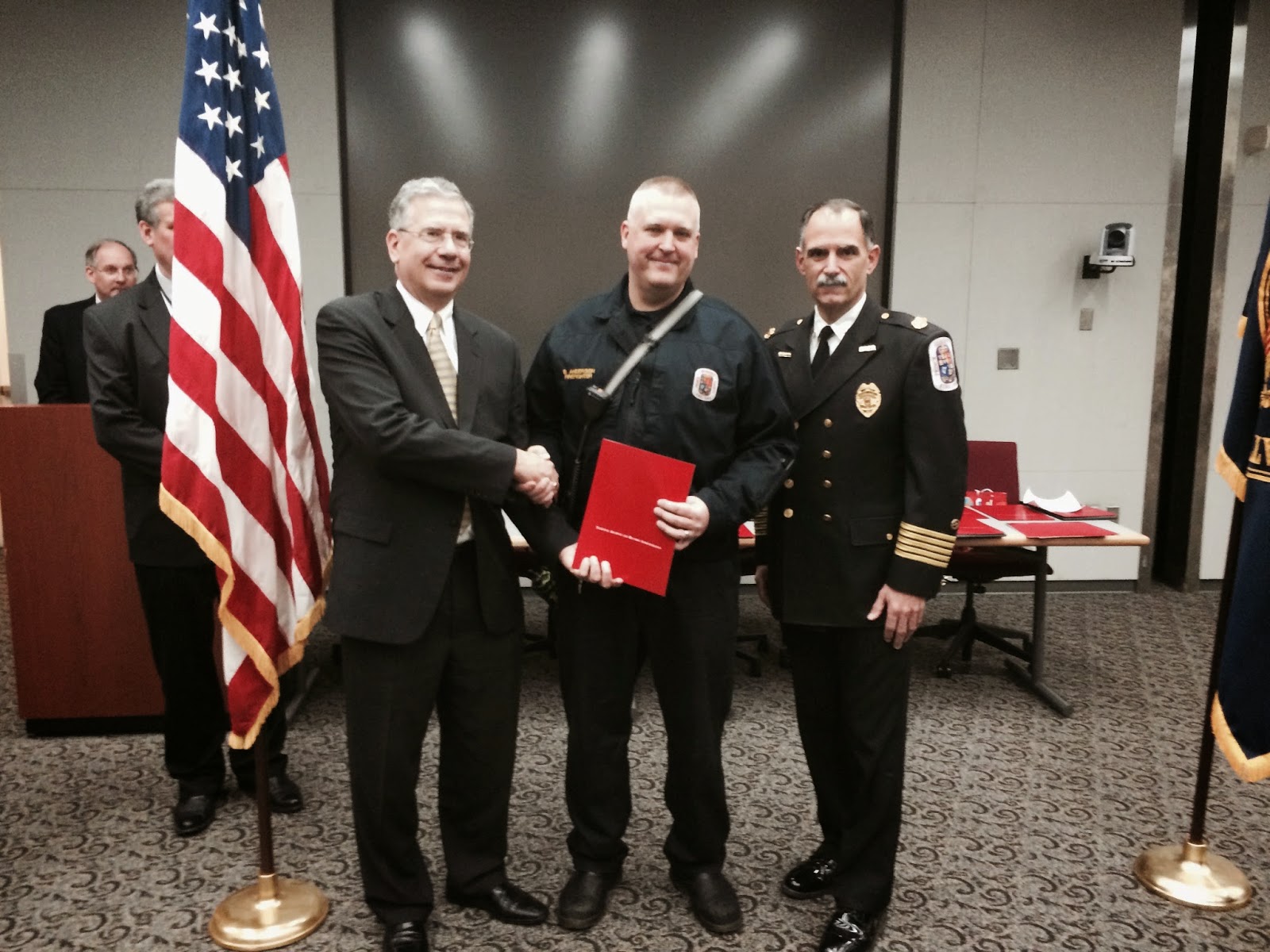 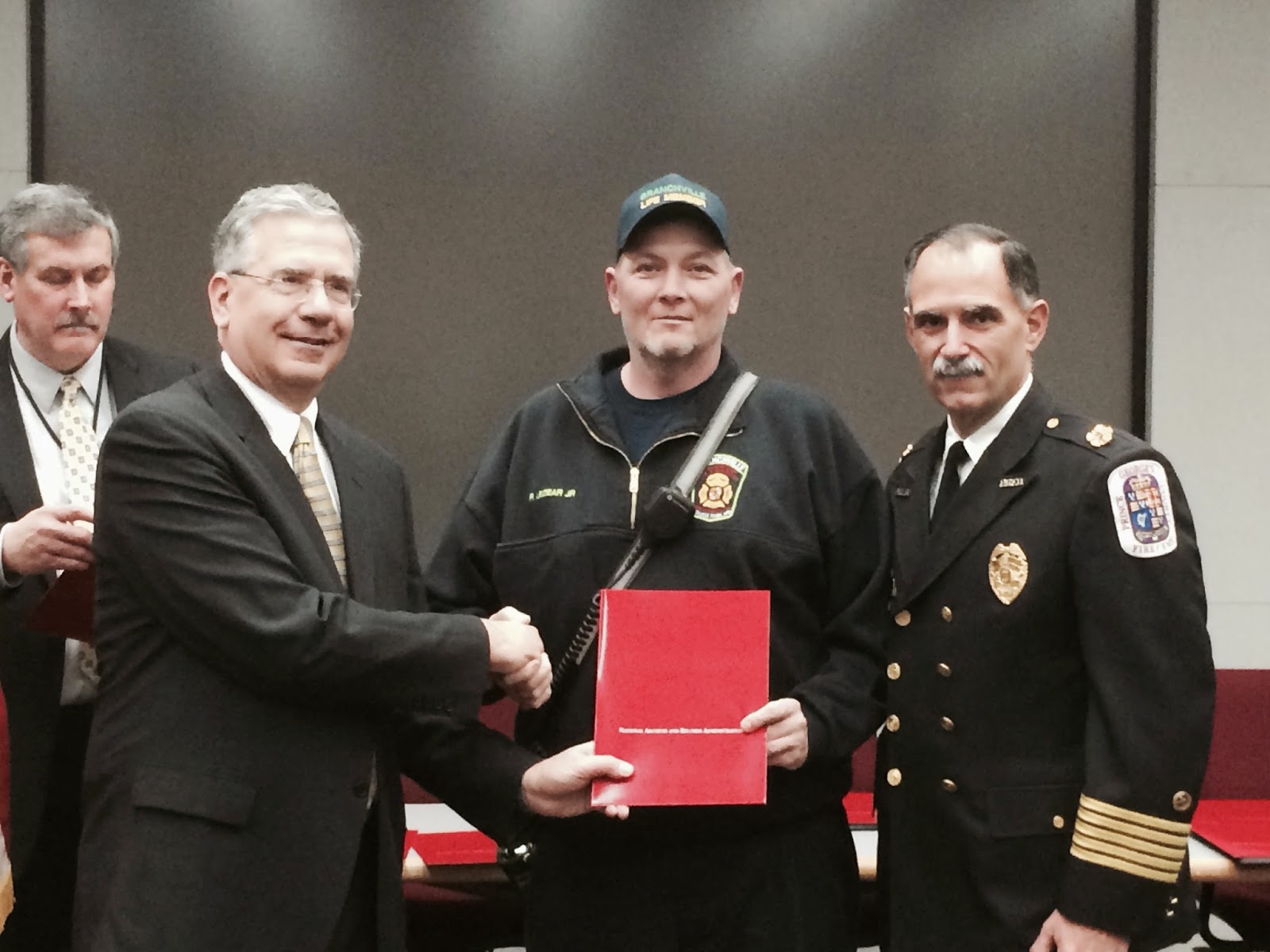 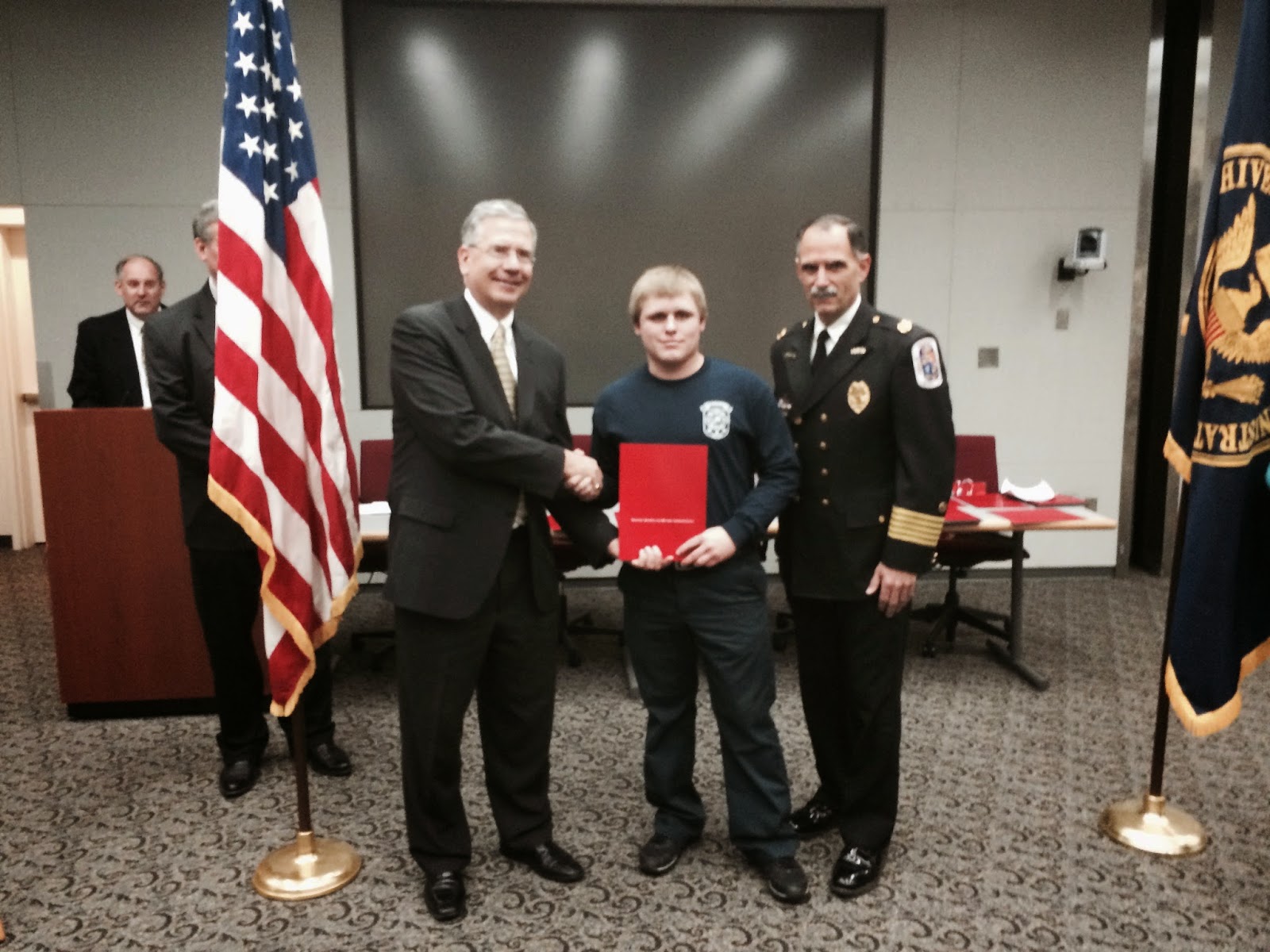 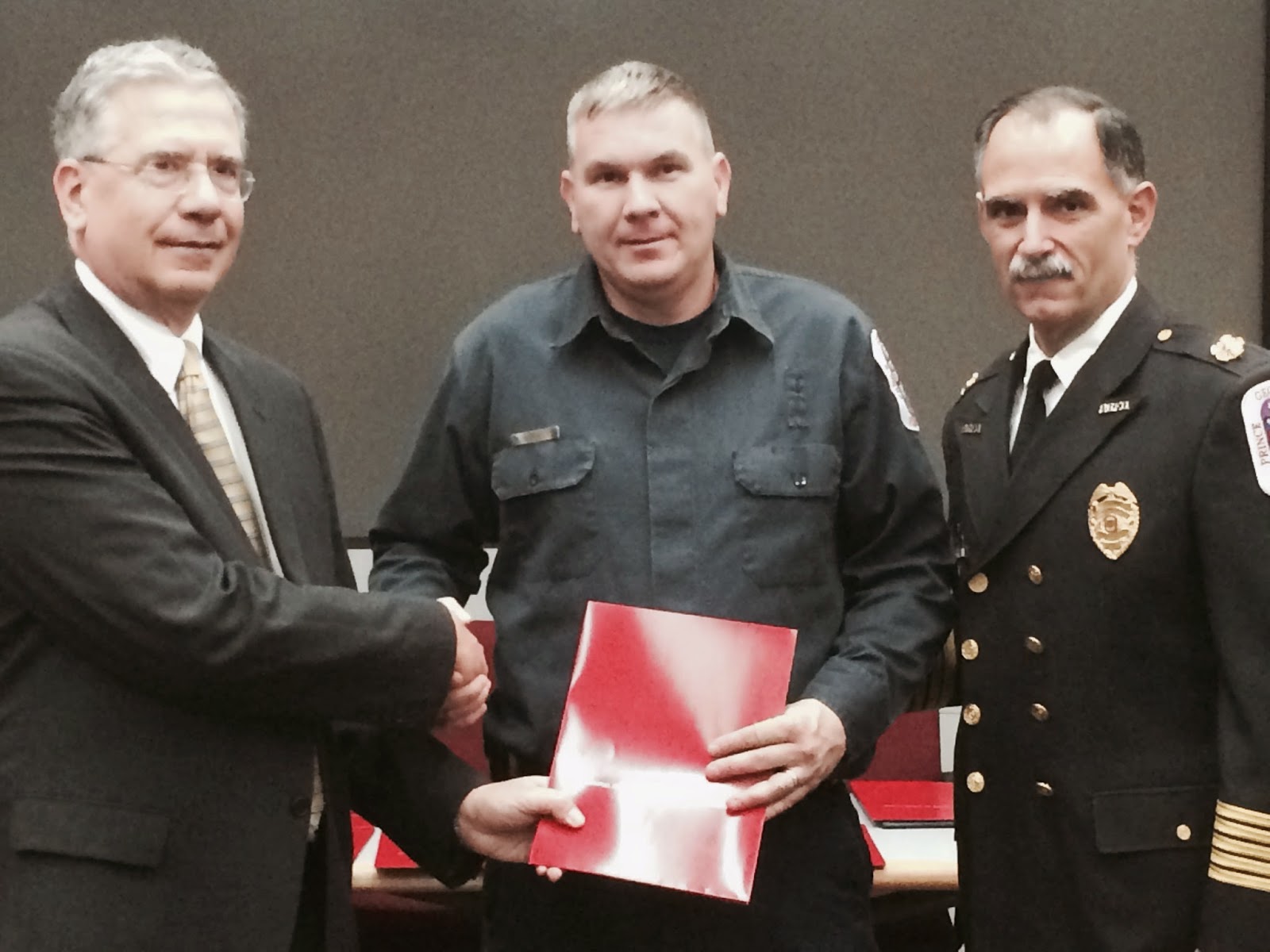 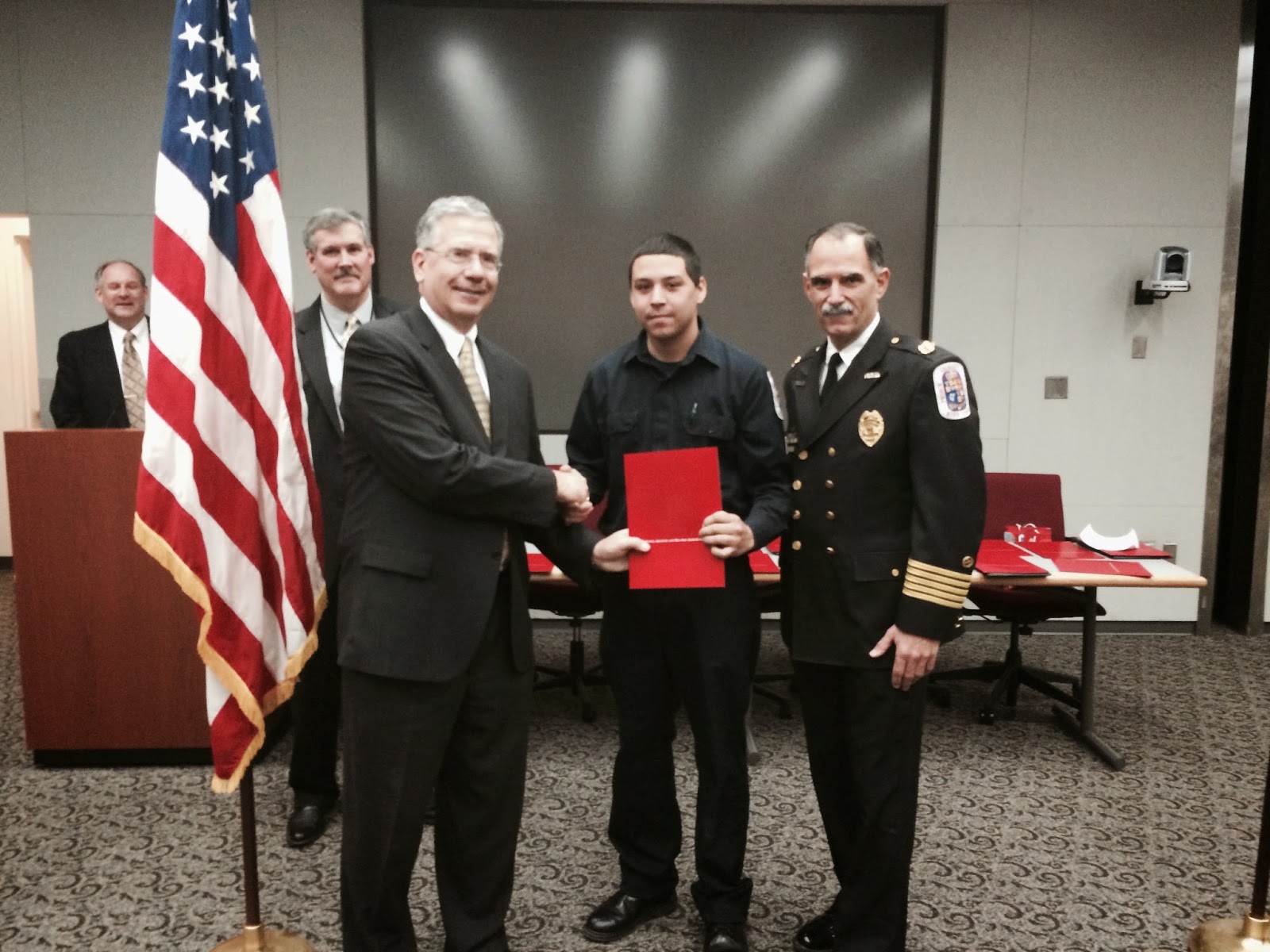 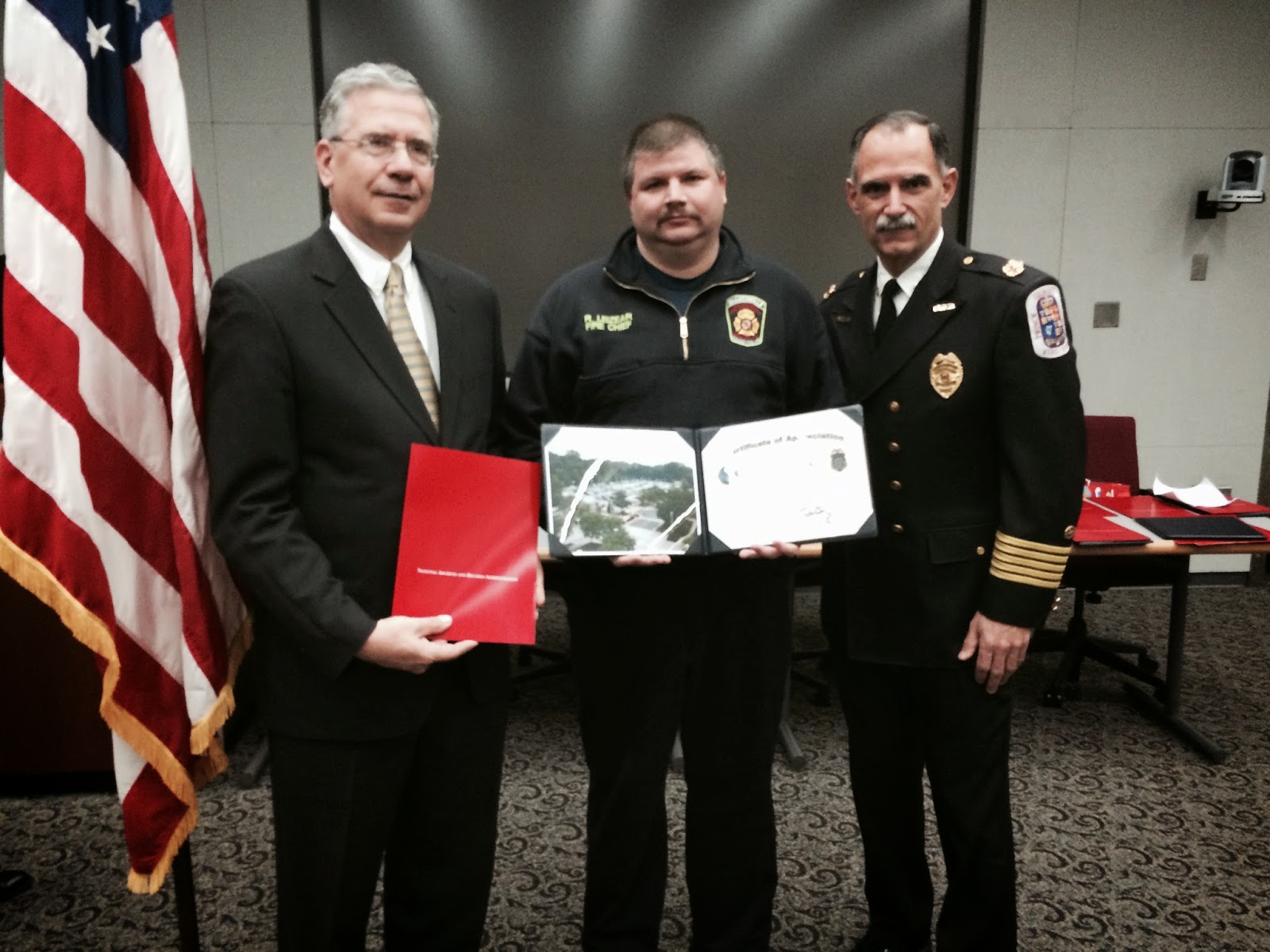 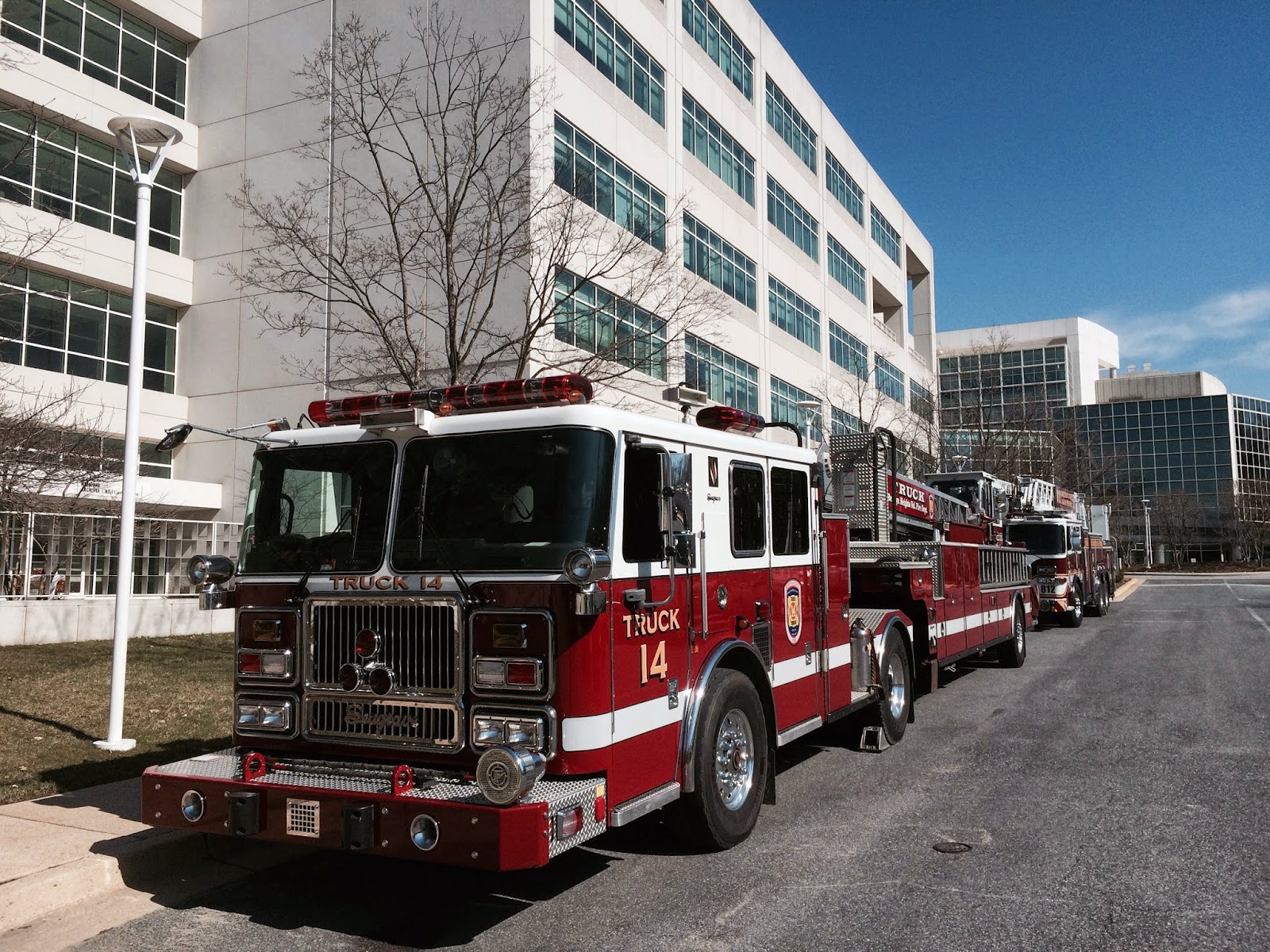 Posted by PGFD at 4:15 PM No comments: Links to this post

#1. 10-year Smoke Alarms. - Purchase, install one on every level of your home, primarily outside of sleeping areas and in bedrooms.  Test on the first day of each month.

#2.  10-Year Carbon Monoxide Detector - Purchase and install one for every level of your home primarily outside of sleeping areas.  Test on the first day of each month.

#3.  Plan an escape from your home in the event of a fire.  Identity two ways out of every room.  Practice your plan at least twice-a-year in conjunction with testing smoke and CO alarms.

#4.  Never leave cooking unattended. Never overload electrical outlets and extension cords.  Never leave candles burning unattended.  Keep matches and lighters out of children's reach.  Keep grills and BBQ's at least 3 to 10 feet away from items that can burn (including your house).  House on fire - GET OUT and STAY OUT.

In Prince George's County, if you need a smoke alarm and can not afford one, you can call 311 and request one.  A firefighter will come to your home and install a working smoke alarm, free of charge. Many, if not all, Fire Departments in the National Capital Region have similar smoke alarm programs.

Mark E. Brady
PGFD PIO
Posted by PGFD at 5:24 PM No comments: Links to this post

Worker Extricated by PGFD from Recycling Equipment in Chapel Oaks

Prince George’s County Firefighters, Medics and the Technical Rescue Team were dispatched to a recycling center for a 911 report of a man trapped within machinery.  Fire/EMS units were alerted at around 10:15 am, Saturday, March 28, and arrived at the facility located in the 2000 block of Kenilworth Avenue in Chapel Oaks to find an adult male, late 20’s, that had his legs entangled in a conveyor belt.

Firefighters from Chapel Oaks Station 838 and Hyattsville Station 801 quickly assessed the situation and developed a plan for extrication.  Medics determined the patient was conscious, breathing and in pain and were in close proximtry while the man was removed from the machine.  Fortunately, first arriving crews were able to safely extricate the patient quickly and the Technical Rescue resources were not required.

Paramedics continued to treat the patient that was suffering from traumatic injuries to both legs.  He was packaged and transported to a nearby Trauma Center.  His injuries are serious but not life threatening.

Images obtained by PGFD while extrication was in progress. 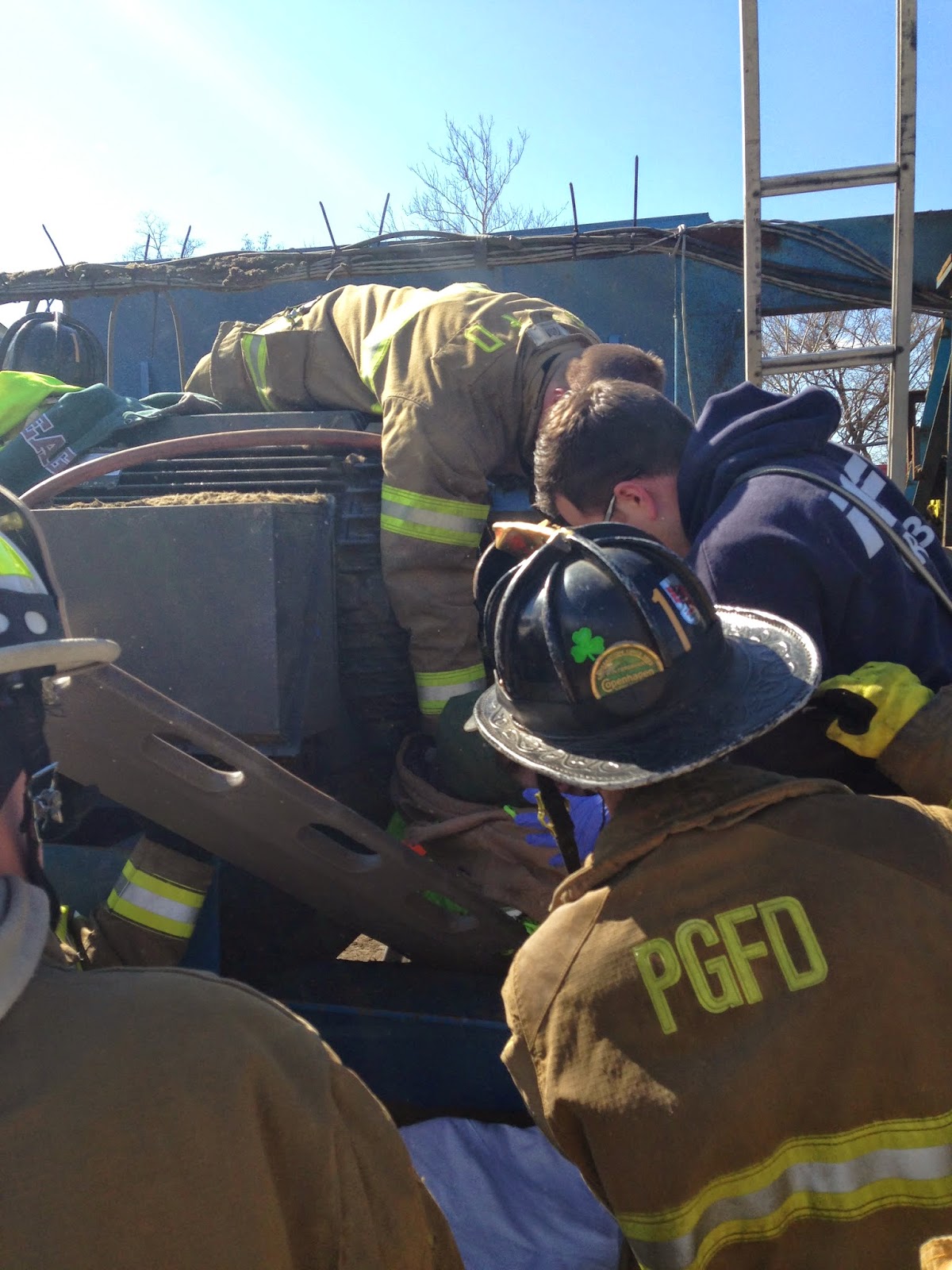 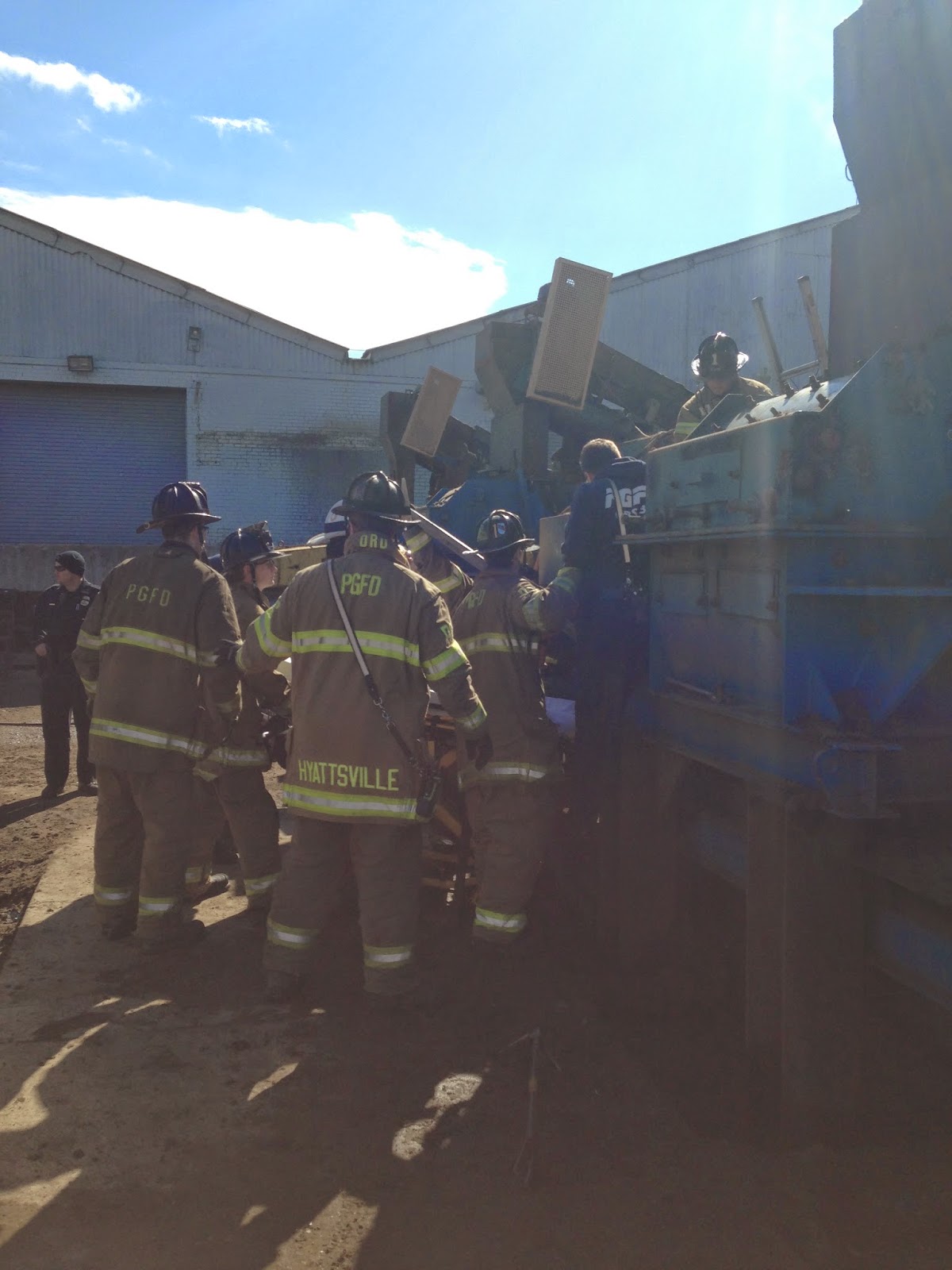 Posted by PGFD at 11:51 AM No comments: Links to this post 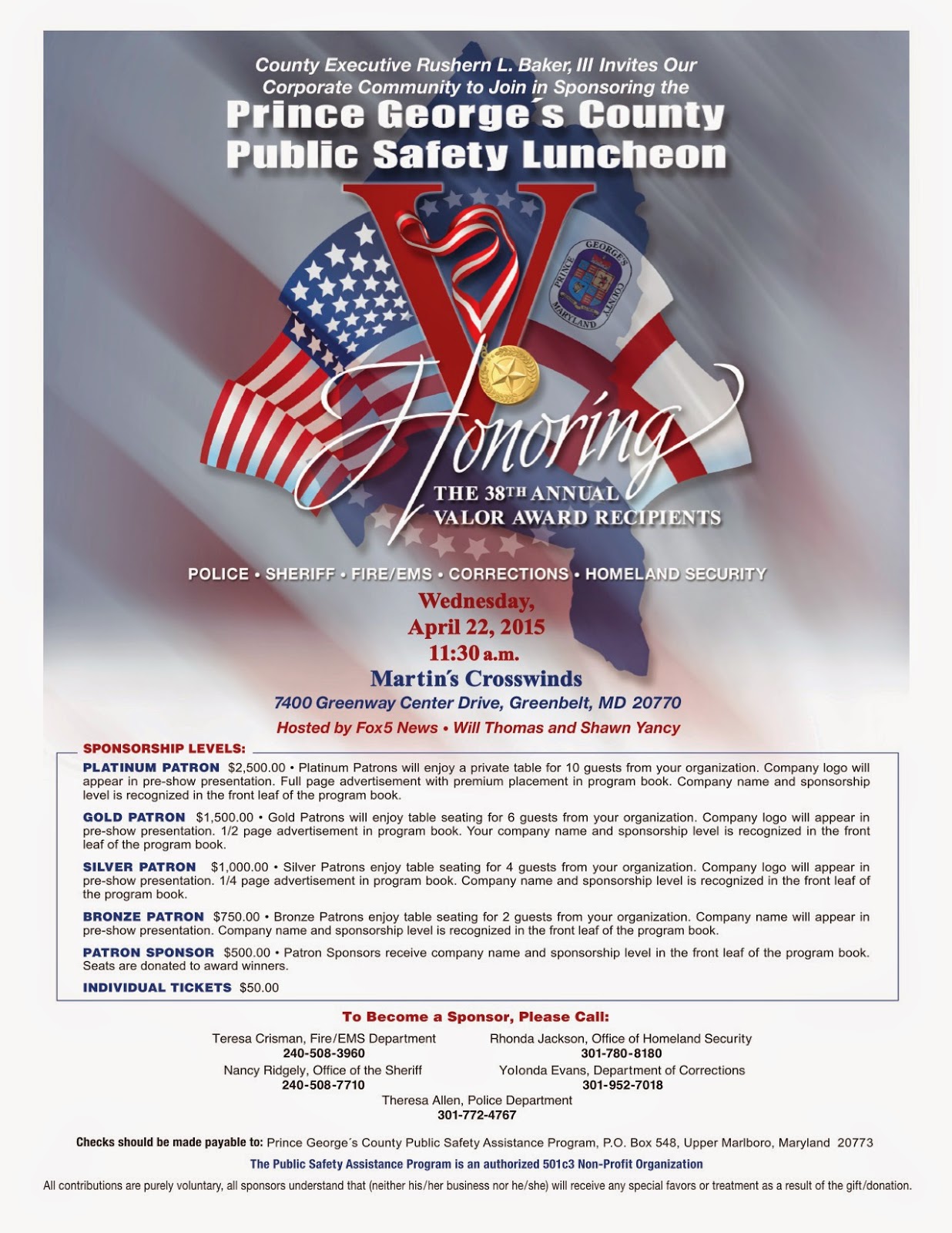 Posted by PGFD at 11:22 AM No comments: Links to this post 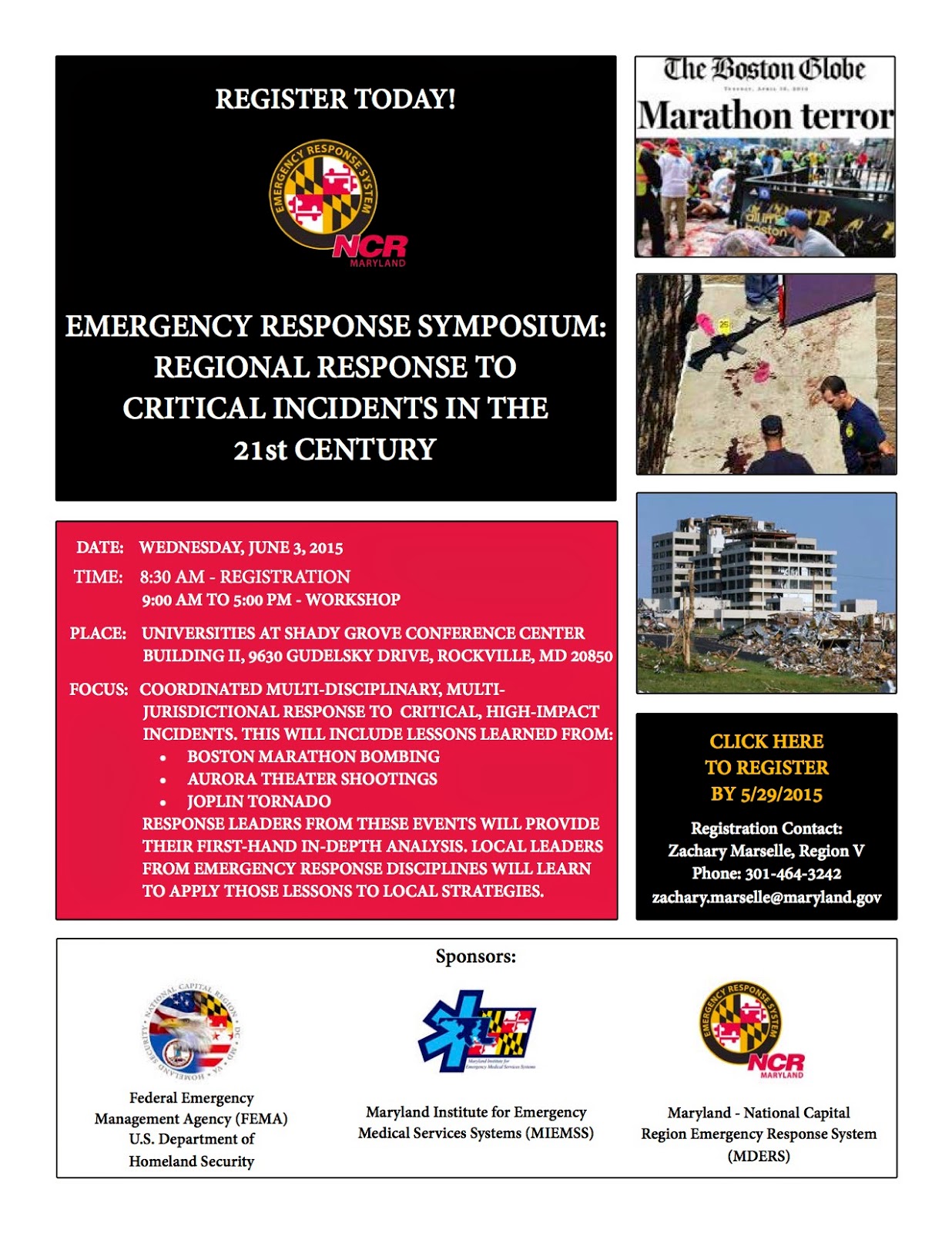 Posted by PGFD at 9:32 AM No comments: Links to this post


The Prince George’s County Fire/Emergency Medical Services Department is inviting members of our media to participate in a morning of training like a firefighter.  Firefighters have been utilizing a mostly abandoned mall to hone their skills of search and rescue, use of tools and learning new techniques.  Now, it’s the medias opportunity to wear a firefighters protective gear, breath air from breathing apparatus, search for a trapped victim in a non-toxic smoke filled room and use a thermal imaging camera to “see” through the smoke and watch silhouettes of firefighters search a room.

We place “safety first” and we don’t like to see anyone get hurt.  There is no actual fire, no heat; just non-toxic smoke.  You can still observe operations while wearing your civilian clothes in a room charged with non-toxic smoke.  The smoke is so thick you will be challenged to see your hand placed in front of your face.  Firefighters will be assigned to all participants to help ensure your safety.

Our time at the Market Place Project will be drawing to a close shortly.  This is medias opportunity to gain valuable insight to a day in the life of a firefighter.  We invite all disciplines of media; reporters, photographers, videographers, assignment desk, editors, producers, writers, anchors and interns.  Anyone and everyone is welcome.

If possible, call Mark E. Brady, if you are able to attend.

WHO:              Fire Chief Marc S. Bashoor along with many Prince George’s County Firefighter/Medics

Plenty of photo ops, interviews and sights you have never seen before in a controlled and safe environment.
Posted by PGFD at 9:04 AM No comments: Links to this post

Just after 12:30 am, Monday, March 23, an initial report of the fire was made by police officers that radioed in that smoke was coming from a townhouse in the 2800 block of Iverson Street.  Fire/EMS units arrived quickly and encountered heavy smoke coming from the front side of a townhouse with fire showing from the rear.

Prince George’s County Police Officers were the first to discover the fire and immediately notified Public Safety Communications by way of their radios and initiated an evacuation of sleeping residents from the townhouses closest to the one on fire.

The fire appears to have started in a kitchen of the townhouse of origin and quickly spread to the second floor and attic area.  Firefighters ensured the fire was completely extinguished and limited the extension of fire to adjacent homes through extensive overhaul and inspection of interior walls and ceilings

The County Police continued to radio updates about the conditions on the scene that were relayed by police dispatchers via computer aided dispatch system to fire dispatchers that broadcast the updates to the incident commander and responding firefighters.  The radio updates were useful in allowing the incident commander an opportunity to formulate a plan of attack before arriving on the scene.

It required about 20 minutes for firefighters to extinguish the work intensive fire.

Fortunately, through the combined efforts of police, firefighters, dispatchers and our Citizen Services Unit, no injuries were reported and displaced residents are receiving assistance.  One occupant was evaluated by medics but did not go to the hospital.  All occupants were able to safely escape thanks to the early notifications by police.

The occupants from the row of eight townhouses will be displaced, some just for the short-term.  A total of 22 residents, 11 adults and 11 children are displaced.  The County Citizen Services Unit and the American Red Cross are providing temporary relief for 8 of those residents.  Other displaced residents made their own arrangements.

Fire Investigators are still searching for the cause of the fire and have labeled this incident as “under investigation.”  Included in this investigation is the presence and status of smoke alarms.  Estimated fire loss is placed at $200,000.
Posted by PGFD at 11:41 AM No comments: Links to this post