Prince George's County Firefighters battled their second 2-alarm apartment fire in the last 8 hours this evening.  Just after 7:00 pm, firefighters from the greater Landover area responded to a report of a fire in an apartment on the second floor of 6315 Landover Road.  Firefighters arrived quickly and encountered a 3-story garden style apartment building with a working fire on the second floor.  The fire appears to have started in a second floor apartment kitchen and extended through the walls to the top floor and roof area.  Firefighters initiated an interior attack on the fire and searched for any trapped occupants.  A "second alarm" was sounded bringing additional firefighters, paramedics and resources to the scene.  The fire had extended to the cockloft/roof area before being extinguished, however, firefighters were successful in stopping any extension into the attached apartment building.

Firefighters had the bulk of the fire knocked down within 30 minutes and all searches proved negative.  There were no civilian injuries reported, however, a firefighter sustained injuries in a 12-15 foot fall from a ground ladder.  He was evaluated by paramedics and transported to a nearby hospital.  He is in good condition and his injuries are considered non-serious.

Fifteen apartment units in the building are uninhabitable and the occupants will be displaced.  The Fire/EMS Departments Citizen Services Unit and the American Red Cross will be assisting 22 adults and 5 children with shelter and other provisions.

This fire was dispatched just minutes after a Memorial Service for the Deputy Chief of the Hyattsville Volunteer Fire Department commenced.  Jimmy Hook passed away suddenly last week during a medical procedure.  A Fire/EMS Department Memorial Service started at 7:00 pm at the nearby Bunker Hill Fire/EMS Station on Rhode Island Avenue

Posted by PGFD at 8:57 PM No comments: Links to this post

MEDIA CONTACT: Mark E. Brady, Chief Spokesperson, 240-508-7930, mebrady@co.pg.md.us
The Prince George’s County Fire/Emergency Medical Services (EMS) Department (PGFD) has developed and is currently evaluating a mobile simulator for “MAYDAY” in-serve training for firefighters. This training was developed in part due to a Safety and Investigative Report (SIT) that reviewed circumstances involving a house fire that critically injured a firefighter. The SIT identified several contributing factors that led to the firefighters injuries, including, lack of training and experience in firefighter survival skills.


The PGFD has continually made available and conducted several training programs including Fireground Survival Training and other similar programs in an effort to make these survival skills second nature. Typically, in order to simulate an actual fireground situation, training has been held at the Fire/EMS Department’s Training Academy in Cheltenham; located in the southern portion of the county and is not conducive, geographically, to in-service training programs for a large portion of stations in central and northern parts of the county.

The Technical Services Battalion, under the command of Major Adon Snyder, has developed a mobile “mayday” simulator, accompanied by a classroom lecture, which can be easily brought to any Fire/EMS station or training facility. A 40-minute classroom session with power point presentation and practical evolution comprise this training program. The practical portion starts with participants raising their heart rate to about 140, a rate consistent with response and initial activity at an incident scene. It is also the heart rate where decision making could be adversely affected. Raising the heart rate is accomplished by participants donning full personal protective equipment (PPE) and self contained breathing apparatus (SCBA) then carries a stand-pipe pack for approximately 5 to 10 minutes. The firefighter then places their cloth covered face piece on and begins to breathe air. The firefighter, with no visibility, is then instructed to follow a 100 foot section of hoseline. The firefighter follows the hoseline and is led up a ramp and then up steps to a simulated second floor and then experience a sudden floor collapse.

The firefighter, following General Orders and valuable lessons learned in the classroom portion of the drill, must then demonstrate the correct survival skills and mayday procedure.

The mobile mayday simulator was constructed inside of a fire department utility box truck. The conversion of the interior box of the utility truck includes elements required for participants to ascend steps onto an upper floor landing and a collapsible floor which will allow participants to feel the unexpected jolting experience of a floor collapse. The firefighter has been previously instructed to ensure their SCBA and PPE are still in place and then transmit, by way of their portable radio, a correct MAYDAY message.

The drill is designed not only for firefighters but also incident commanders that will receive the radio mayday message and act accordingly. Scenarios can be modified to include non-working radios, dislodged facepiece, etc.  The mobile mayday simulator has been used at select stations in order to collect data and evaluate the program. The program has received very positive feedback from both evaluators and participants. A train-the-trainer program is now being developed and will soon be made available to all personnel.


Posted by PGFD at 5:30 PM No comments: Links to this post 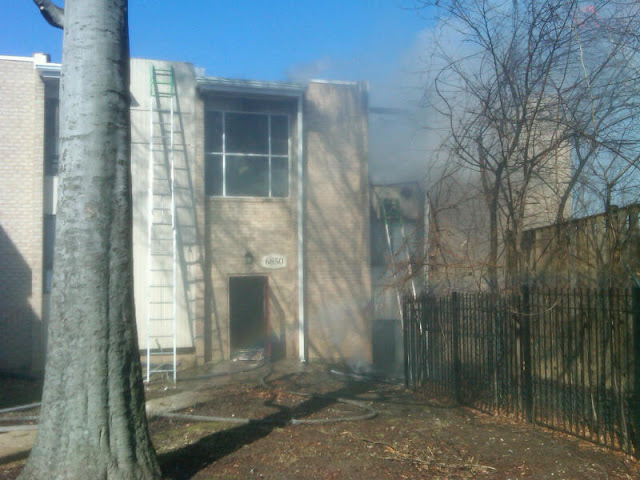 At about 12:45 pm, Tuesday, March 1, 2011, firefighters from the District Heights area responded to a report of an apartment fire with people trapped. Upon arrival at 6850 Walker Mill Road, fire/EMS units found a 2-1/2 story in the front-3 stories in the rear-flat roof- garden style apartment building with heavy fire showing from a top floor unit.

Four occupants attempted to exit the building via the enclosed interior stairwell , however, encountered thick smoke and intense heat.  The second floor occupants sought relief and retreated to the balcony on the rear of the building. They sheltered-in-place and were assisted by firefighters using ground ladders.

A "second alarm" was sounded bringing a total of about 60 firefighters to the scene on-board 20 pieces of fire/EMS apparatus. It required about 40 minutes to extinguish the fire. No injuries were reported.

There are six apartment units in this building and all occupants will be displaced.  There are about 12 adults and 7 children that reside in the building.  They are being assisted by the Fire/EMS Department's Citizen Services Unit and apartment complex management for living arrangements.  Management will be able to place displaced occupants with other apartments within the complex

The cause of the fire is under investigation.  Preliminary fire loss is estimated at about $150,000. 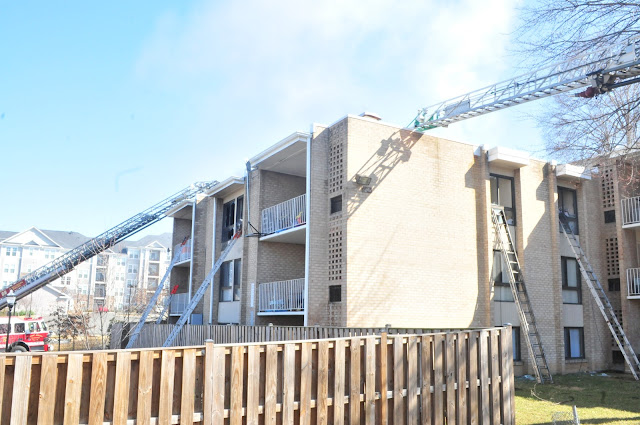 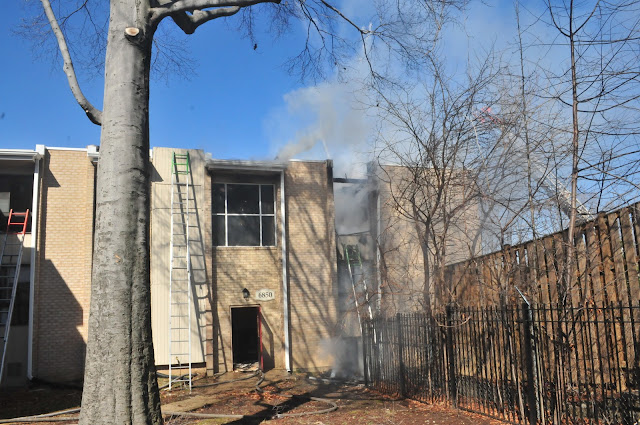 Posted by PGFD at 2:42 PM No comments: Links to this post