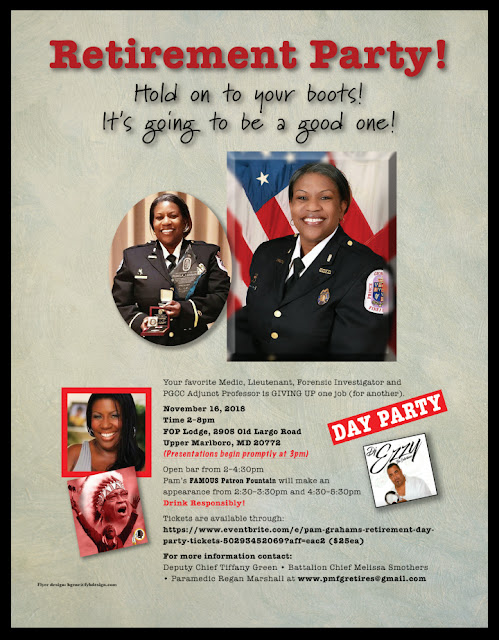 Posted by PGFD at 11:31 AM No comments: Links to this post 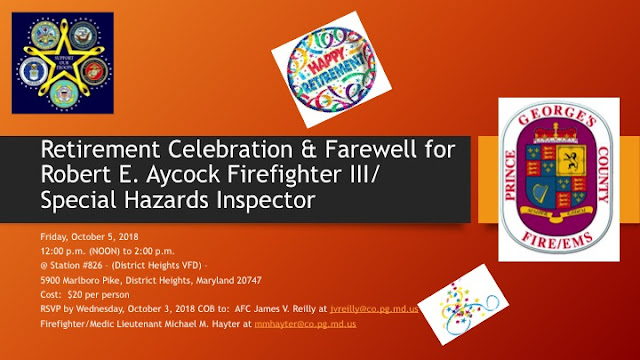 Posted by PGFD at 11:27 AM No comments: Links to this post

Loved One of PGFD Cancer LODD Firefighter Shares Her Story

Firefighter/Medic Captain Christopher Hill passed away on July 21, 2016, from cancer. His service included Fire/EMS Department Line of Duty Death and full military honors, as he served his Country with the United States Army. Chris left behind wife Jen, two children, a host of other family and friends, and a grieving Department.

Jen Hill is devoting her experience with living through Chris’ diagnosis and illness and her grief for what she believes could make a difference in saving the lives of firefighters, as well as helping families to avoid what she endured. Jen has developed a program that will educate firefighters about the dangers of service-related cancers, emphasizing that properly cleaned gear and other preventative measures should be a way of life. She speaks candidly about the effects of losing a loved one and its overall impact on the family.

Jen recently held a one-hour presentation for the Prince George’s County Fire/EMS Department Career Recruit School #58. She hopes to expand the program to include other jurisdictions.

The latest statistics from the National Fire Protection Association (NFPA) show that if you have a reported fire in your home, you are more likely to die today than you were a few decades ago. This startling statistic is behind this year’s Fire Prevention Week theme: “Look. Listen. Learn. Be aware - fire can happen anywhere.™” Fire Prevention Week takes place October 7-13, 2018.

Through three simple calls-to-action, this year’s theme identifies basic but essential ways people can reduce their risk to fire and be prepared in the event of one:


“People take safety for granted and are not aware of the risk of fire,” said Lorraine Carli, NFPA vice president of Outreach and Advocacy. “Paying attention to your surroundings, looking for available exits in the event of a fire or other emergency, and taking the smoke alarm seriously if it sounds can make a potentially life-saving difference in a fire or other emergency situation.”


This year’s Fire Prevention Week messages apply to virtually all locations. However, NFPA continues to focus on home fire safety, as the majority of U.S. fire deaths (four out of five) occur at home each year. In fact, the fire death rate (per 1000 home fires reported to the fire department) was 10 percent higher in 2016 than in 1980.
“While we’ve made significant progress in preventing home fires from happening, these statistics show that there’s still much more work to do when it comes to teaching people how to protect themselves in the event of one, and why advance planning is so critically important,” said Carli.

“Look. Listen. Learn. Be aware – fire can happen anywhere.” works to remind the public that fires can and do still happen – at home, as well as other locations - and that there are basic but vitally important steps people can take to remain safe.

As the official sponsor of Fire Prevention Week for more than 90 years, NFPA works with local fire departments throughout North America to promote the campaign in their communities and reaches out to the public directly to encourage everyone to take action to be safe.

"I encourage all of our citizens and residents of all ages to visit one of the many Open Houses being held at Fire/EMS Stations throughout Prince George's County," said County Fire Chief Benjamin M. Barksdale.  "Be proactive with fire prevention."

Here is a list of Open Houses being held.  Additional events may be added to this list. 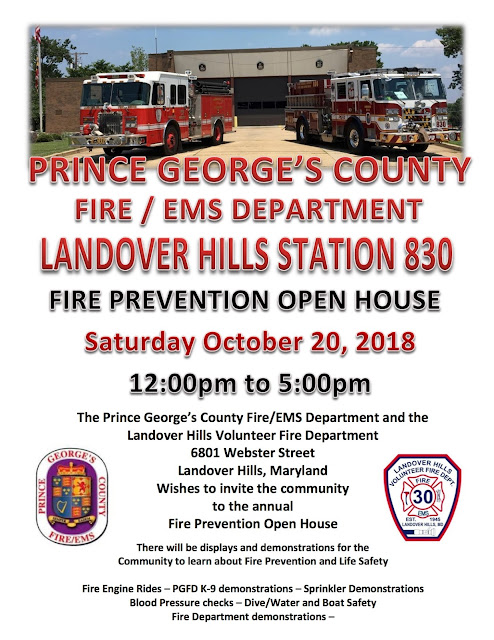 Posted by PGFD at 10:24 AM No comments: Links to this post

The Prince George's County Fire/Emergency Medical Services Department is hosting 10 emergency services personnel from Belgium.  The Belgium Fire Observers arrived on September 17th and will spend 10 days with Firefighter/Medics around the County riding calls, living, eating and participating in the day to day activities.

This past Saturday many of the Belgium Fire Observers participated in exercises with the Department's Marine Unit at the National Harbor.  While there, crews encountered a young lady, Angelina O'Steen, selling lemonade and were intrigued by the 9-years's old story.

Angelina is 9 battling Cystic Fibrosis. She has been a patient numerous times over her short life at Children's National Medical Center (CNMC) from complications from the disease. She has been operating a lemonade stand at various locations in the Southern Maryland region raising money to donate the proceeds to the CNMC Pulmonary Clinic.

The plan is to present a check to CNMC pulmonary clinic the Tuesday after Thanksgiving this year. Angelina was extremely excited when she learned that a firefighter from Belgium came all the way to National Harbor just to try some of her now World Famous lemonade.

Posted by PGFD at 10:07 AM No comments: Links to this post