Firefighters battled a fire in a single family home that caused an estimated $60,000 in damages this afternoon. At about 1:30 pm firefighters from Oxon Hill and surrounding communities responded to a 911 report of a house fire in the 8600 block of Botley Drive in Fort Washington.  When Fire/EMS units arrived they found fire coming the first floor of a 2-story house.  The occupants had escaped safely prior to the fire departments arrival.

Firefighters initiated an aggressive attack on the fire and extinguished the blaze within 15 minutes of arrival.  Even though the family had confirmed everyone was out of the house, a complete primary and secondary search of the structure were completed.

It appears the fire started in the kitchen as a result of unattended cooking.  The fire grew in intensity and extended to other portions of the house before being extinguished.  One firefighter sustained minor burn injuries and was treated and released form the Burn Unit at Medstar-Washington Hospital Center.  Long after the fire had been extinguished and firefighters were cleaning up, a female occupant of the damaged home was overwhelmed from the heat of the day and the emotions of the event.  She was transported to an area hospital in good condition.

The County Citizen Services Unit assisted the displaced occupants of the home.  Three adults, five children and two dogs were provided relief and temporary shelter by the American Red Cross.


Posted by PGFD at 4:38 PM No comments: Links to this post

All Photos By: Billy McNeel, Office of Emergency Management

The combined career, civilian and volunteer resources of the Prince George’s County Fire/Emergency Medical Services Department were kept busy Friday evening with what officials from the National Weather Service (NWS) called a “micro-burst.”

The NWS had issued a Severe Thunderstorm Warning prior to the powerful storm cell moving through the Bladensburg community and surrounding area around 8:00 pm.  A microburst is a very localized column of sinking air, producing damaging divergent and straight-line winds at the surface.  A microburst often has high winds that can knock over fully-grown trees and cause damage to structures. They usually last for a duration of a couple of seconds to several minutes with winds exceeding well over 100 mph.
Firefighters responded to over 235 calls in about 4 hours during and after the storm (a normal 24-hour call volume average is 365 calls).  Personnel searched 28 multi-family apartment buildings to ensure everyone was evacuated and to inspect damage.  At one point during the storm the Fire/EMS Department Medical Ambulance Bus and additional EMS resources were alerted to stand-by at the Prince George’s Hospital Center.  The hospital suffered a power outage and was considering relocating some patients, however, no action was needed and the staff at the hospital handled the situation. 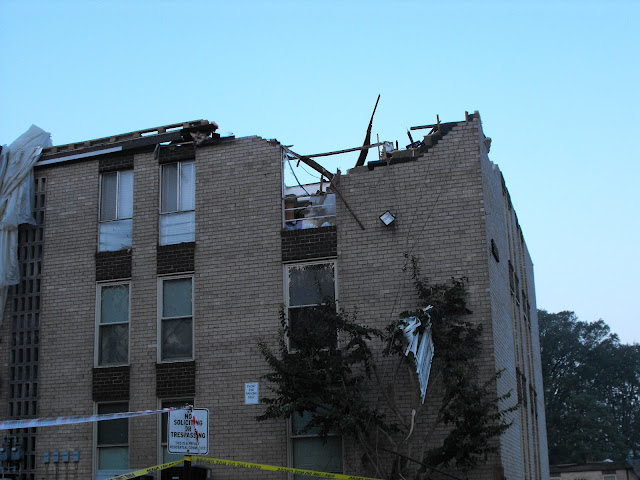 On Friday evening, Assistant Fire Chief Ronald A. Bridges reported that 15 multi-family dwellings and one single-family dwelling sustained roof and/or structural damage near 54th Street and Newton Street. The Roger Heights Elementary School was opened as an evacuation center to house displaced residents, estimated at 300 to 600 people. It is not known how many residents used the shelter.  There were two minor injuries reported (civilian) and both of those individuals were transported to local hospitals in good condition. 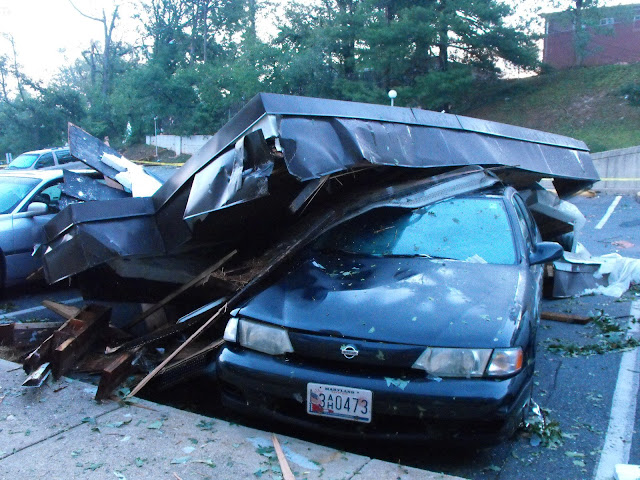 The Prince George’s County Office of Homeland Security and the Office of Emergency Management opened the Emergency Operations Center and immediately started to assist residents affected by the storm.  A temporary, air-conditioned, shelter is remains open at the Roger Heights Elementary School, 4301 58th Avenue.  A phone line has been established for residents requiring assistance.  Residents are encouraged to call 301-583-2230 for information.  Some of the building sustained significant damage and residents will incur long-term displacement.  The Office of Emergency Management will be working with apartment complex management and the American Red Cross for relief and shelter.
On Saturday morning, firefighters returned to the area and continued their search for additional damage under the glow of sunlight.  PEPCO reported that there were still about 10,000 homes without power, mostly in the Hyattsville and Bladensburg areas. 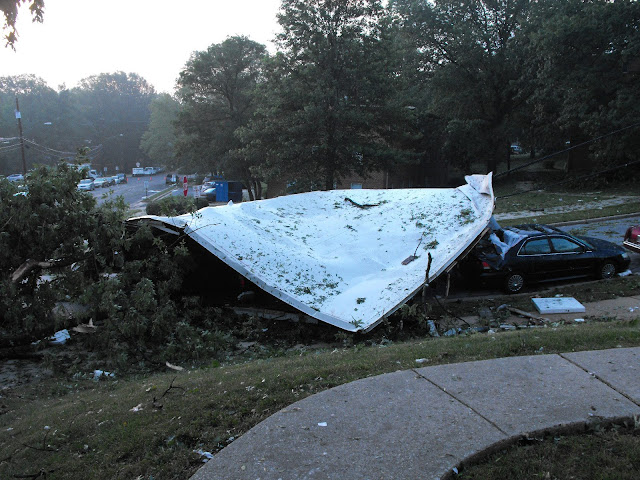 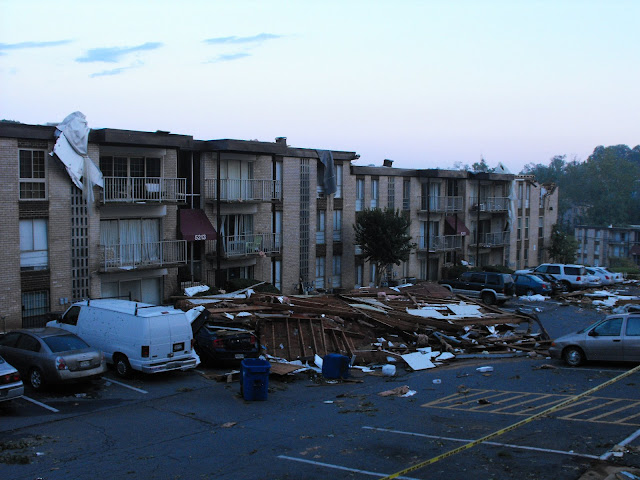 The Office of Homeland Security recently posted a Press Release on Saturday morning.

Bladensburg, MD – At approximately 8:07 p.m. on Friday, June 22,  Prince George’s County Emergency responders began deployment to Bladensburg, MD after a confirmed microburst spread through the community. This microburst resulted in severe damage to 15 multi-family dwellings, 1 single family dwelling, and structural damage on Newton Street between 52nd and 55th Avenues in Bladensburg.  There were only a couple of minor injuries according to the Prince George’s County Fire/EMS.

Residents residing in the affected areas have been vacated. Department of Environmental Resources (DER) and Fire/Emergency Medical Services (Fire/EMS) have inspectors on the scene.  These facilities will remain condemned until an official assessment is determined.  Officials from the American Red Cross and the Department of Social Services are on the scene and are assisting with displaced families. Since last night, a temporary shelter was established at Rodgers Heights Elementary in Bladensburg.

A microburst is a small, very intense downdraft that descends to the ground resulting in a strong wind divergence.  Microbursts are capable of producing winds of more than 100 mph causing significant damage. The life span of a microburst is around 5-15 minutes. 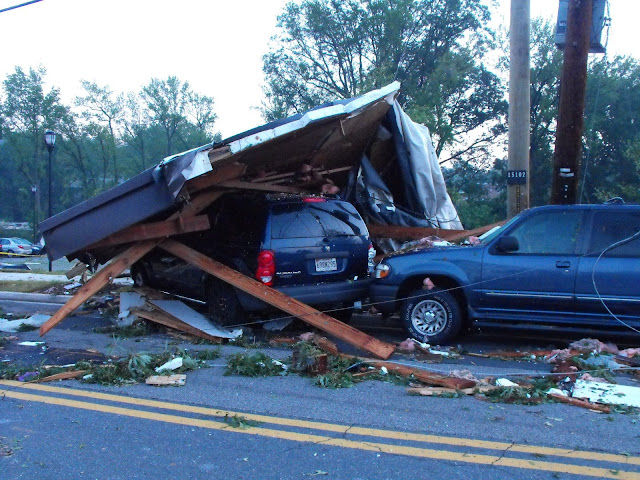 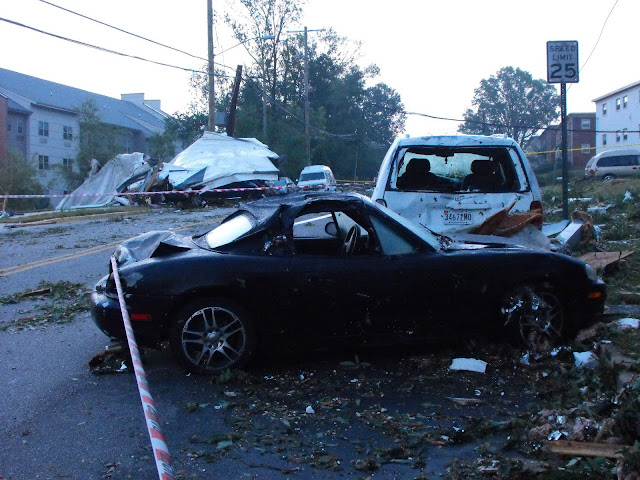 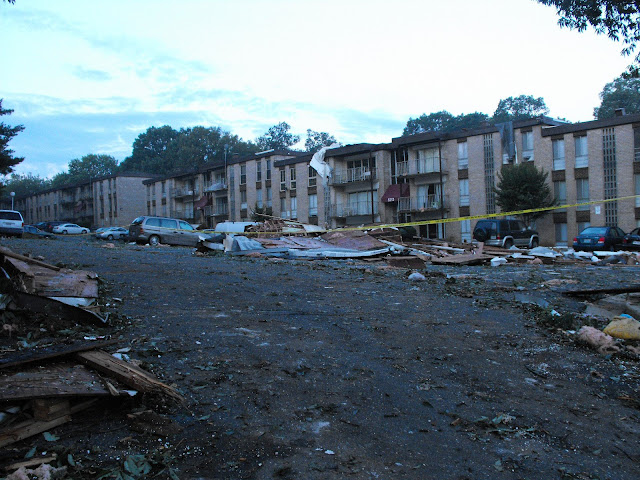 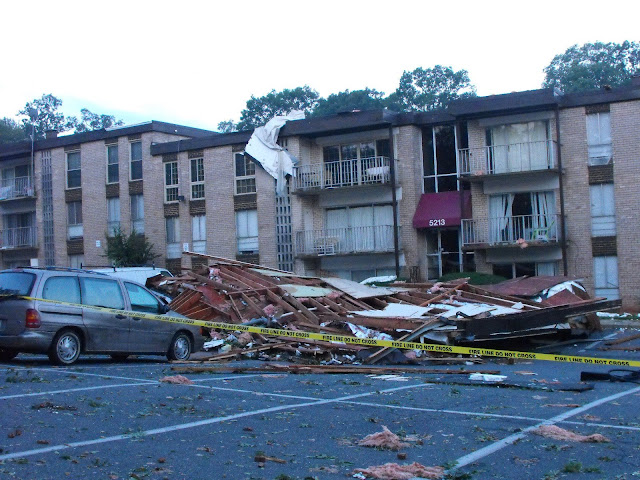 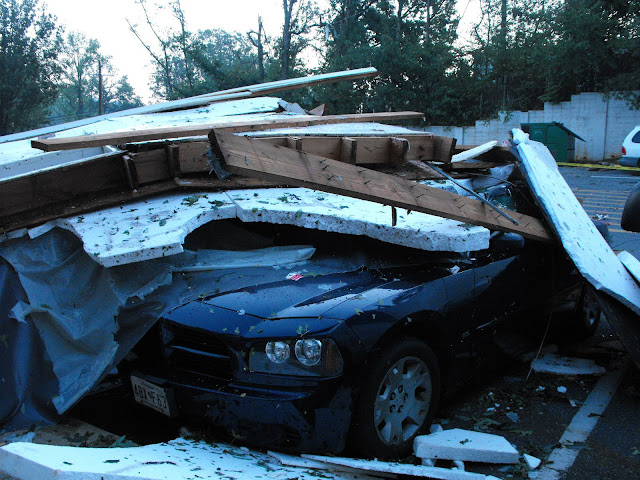 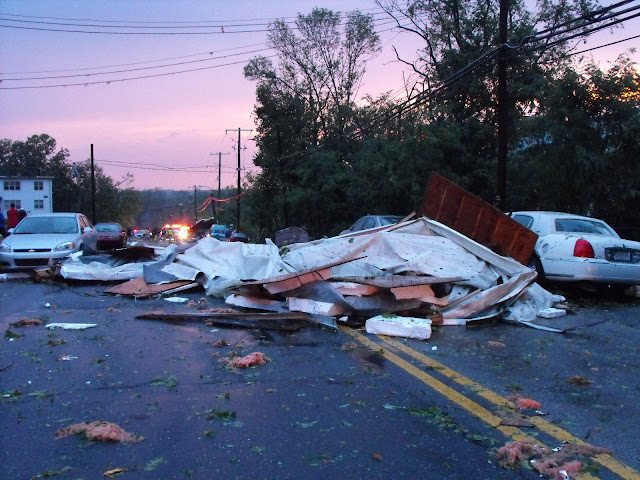 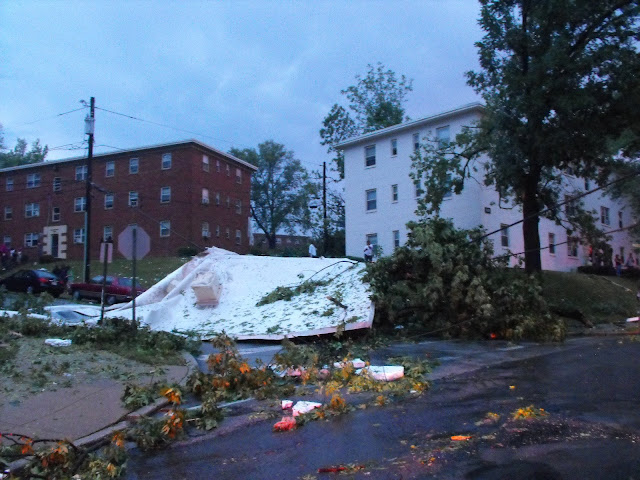 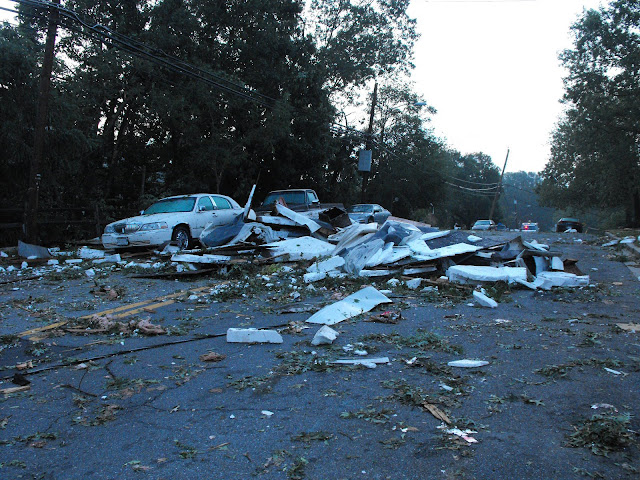 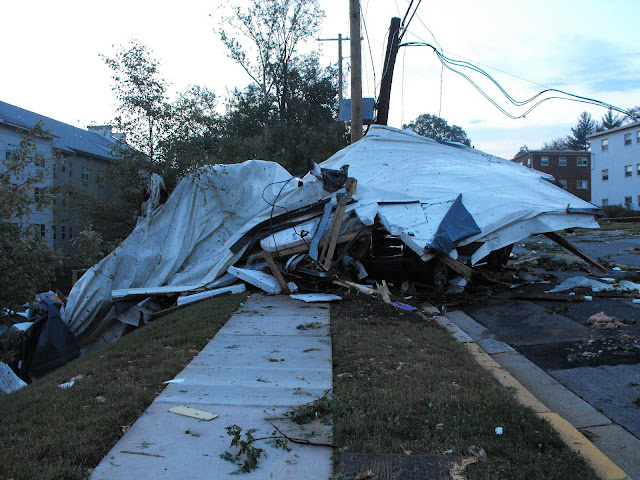 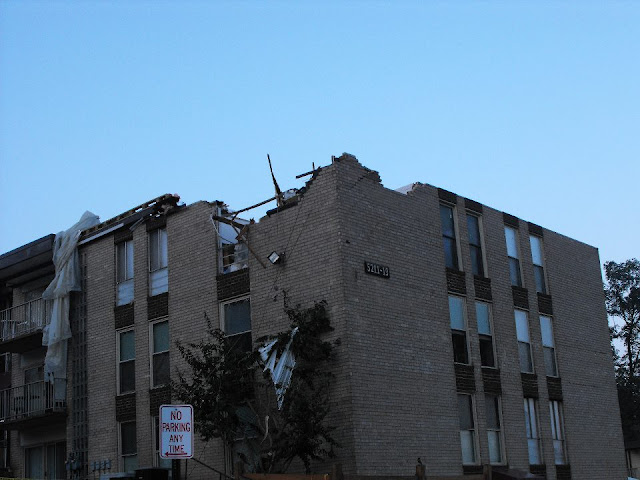 Posted by PGFD at 12:06 PM No comments: Links to this post