Two firefighters were injured and 3 occupants displaced after a fire damaged a home in the 16600 block of Gardner Road in Accokeek this afternoon.  Just before 12:30 pm, Wednesday, January 15, 2014, Prince George’s and Charles County firefighters responded to 911 reports of a house on fire.  An engine from the Accokeek Fire/EMS Station 824 arrived first reporting a large 2-story single family home with heavy fire conditions.

This rural area does not have fire hydrants nearby so firefighters utilized the thousands of gallons of water brought to the scene on board engine companies and fire department water tankers to battle the fire.  It required about 40 minutes to knock down the bulk of the fire with complete extinguishment occurring 90 minutes after arrival.  There were 40 firefighter/medics and support personnel on the scene.

During the course of the fire fight 2 firefighters suffered burn injuries and were transported to a Burn Unit for treatment.  One sustained burns to his feet and the other to his upper body.  It is anticipated that both firefighters will be treated and released today.   No civilian injuries were reported.

The County Citizen Services Unit reported that 3 adult occupants of the home would be displaced.

The cause of the fire is under investigation and damage estimates are not yet available.  You can see from the images provided from the WUSA TV 9 website that damage to the large home is significant.

January 18 update - Fire Investigators report "electrical event" in a 2nd floor bedroom was cause (accidental).  Fire loss is estimated at $75,000. 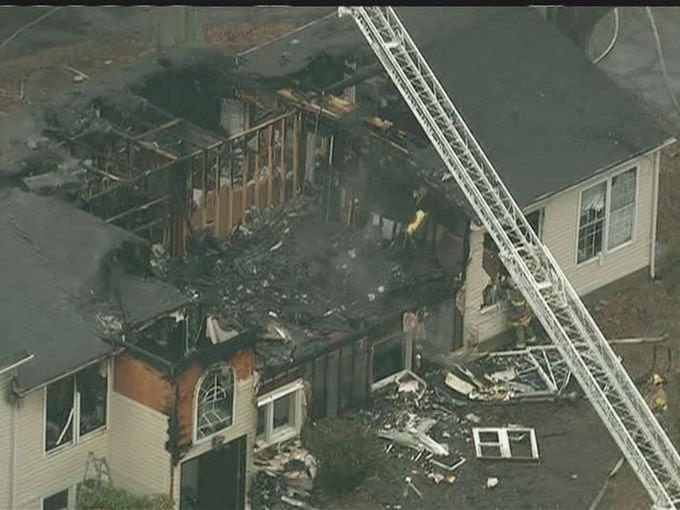 Posted by PGFD at 5:18 PM No comments: Links to this post