“I want to congratulate all the members of the Prince George’s County Fire Commission and thank the County Council for confirming these nominations,” said Prince George’s County Executive Rushern L. Baker, III. “Our volunteer fire and EMS members are a critical component to the safety and security of our residents and I am confident these Commission members, including the first-ever non-Departmental citizen representative, will be great stewards on behalf of our entire Fire/EMS service.”

The Fire Commission reviews the financial needs and requests for public funds of each volunteer fire company. It formulates annually, one capital budget, one capital improvement program, and one current expense budget for all volunteer fire companies with respect to the expenditure of public funds, and shall submit said budgets and program, together with appropriate justification, to the County Executive in accordance with the provisions of the Charter. The Fire Commission will work closely with the Fire Chief to ensure the entire Departments needs are met.

Fire Chief Marc Bashoor added, "The revised configuration of the Fire Commission confirmed today, is the next exciting step in the transformation of the Fire Commission. The advent of non-Departmental community representation and eventually career representation, is a natural progression for a fire service that has grown, from an all-volunteer service prior to Charter, into the largest and busiest combination paid and volunteer fire and EMS Department in the United States. I look forward to working closely with the newly seated Fire Commission, to improve the Department and ensure the entire Fire/EMS Department needs are met."

Mr. John R. Alter, a lifelong Prince Georgian and resident of Bowie, is the current Chairman of the Prince George’s County Fire Commission. Mr. Alter manages the Fire Commission with a total of nine commissioners who provide financial management, oversight, training requirements, grant administration, recruiting, logistic support and medical referrals to members of the volunteer departments. He joined the Fire Commission in 2008 and has chaired the Budget Committee. He oversees budgetary issues and the development of the Capital Improvement Projects. Mr. Alter is an active command officer within Prince George’s County. He is a member of the National Fire Protection Association, International Association of Fire Chiefs and Maryland Fire Chiefs Association. Mr. Alter will serve as a Volunteer Member of the Commission.

Mr. Jonathan P. Bigony, a resident of Bowie, retired from Prince George’s County Government in 2004 after a long career in the Office of Homeland Security, Public Safety Communications Division. He has been a member of the Bowie Volunteer Fire Department and Rescue Squad since 1980. He also currently serves on the Fire Commission. Mr. Bigony will serve as a Volunteer Member of the Commission.

Mr. Tyrome Taliferro Bodrick, a lifelong Prince George’s County resident, currently resides in Upper Marlboro. Mr. Bodrick is currently a member of the Kentland Volunteer Fire Department, where he has served for nearly 13 years. Prior to this tour of duty, he was a member of the District Heights Volunteer Fire Department, where he began his volunteer fire service as a teenager. Mr. Bodrick is employed as a Deputy Sheriff with Arlington County, Virginia Sheriff’s Department. Mr.Bodrick will serve as a Volunteer Member of the Commission.

Ms. Leslie H. Garrett, a resident of District Heights, has been an active member of the Boulevard Heights Volunteer Fire and Rescue Department since 1995. She has held several positions during her tenure. She is a human resources professional with nearly 20 years of experience in the areas of immigration, human resources information systems, recruiting, benefits and compensation. Ms. Garrett will serve as a Volunteer Member of the Commission.

Mr. William H. (Buddy) King, a resident of New Carrollton, has a lengthy 46 year history of dedicated, volunteer fire service in Prince George’s County. He was also a Fire Fighter in his professional career having served the Federal Government as an officer with the Department of the Navy until his retirement in 2008. Mr. King will serve as a Volunteer Member of the Commission.

Mr. Randy S. Kuenzli, a resident of Hyattsville, is actively involved in the Volunteer Fire Service in Prince George’s County and has been since about 1990. Currently, he serves as Chief of the Bladensburg Volunteer Fire Department. His fire service career, which began more than 40 years ago, started in Pennsylvania where he held numerous positions including Deputy Chief and Chief. He is currently employed by the Town of Edmonston as a Code Enforcement Officer. Mr. Kuenzli will serve as a Volunteer Member of the Commission.

Mr. Julian R. (Jay) Tucker, a resident of Upper Marlboro, has been a volunteer fire service member since 1970. He worked for Brandywine Auto Parts as General Manager prior to his retirement in 1999. Mr. Tucker has been very active in the County having served as Past President of the Town of Upper Marlboro. Mr. Tucker will serve as a Volunteer Member of the Commission.

Mr. William C. Taylor, a resident of Fort Washington, was employed as a Journeyman Bricklayer for more than 25 years, having worked on the D. C. Convention Center project and for the Architect of the Capitol. Currently he is the Chairman of the Maryland State Apprenticeship Council where he has been a member since 1997. He has also been a Masonry Instructor, having taught at the University of the District of Columbia and the Job Corps. Mr. Taylor will serve as a Community Member on the Commission.

Posted by PGFD at 5:03 PM No comments: Links to this post

Prince George's County, through the Office of Central Services, recently donated a surplus retired County Explosives Ordinance (EOD) truck to the United States Marines.   The vehicle, a 1987 International, was placed into a surplus status after the Fire/EMS Department received a new EOD vehicle through federal grants.

After making repairs and preparations the EOD vehicle will be used for routine and emergency responses by the Marine Corps Base Quantico Explosive Ordinance Division.

The previous Bomb Disposal Unit served the men and women of the Fire/EMS Department well over the past several years and we wish the vehicle, the operators and the United States Marines continued success and safety with it.

The surplus vehicle was in storage at the Fire/EMS Department Apparatus Maintenance Division in Forestville where it was picked up on July 18th.

M70759 being loaded for the trip to its new home with the Marine Corps in Quantico (EPD Section). 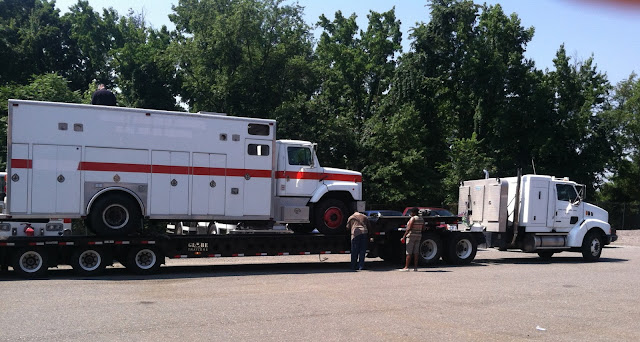 Posted by PGFD at 3:55 PM No comments: Links to this post

We previously posted a story about TEAM PGFD and the 2013 National Red Bull Flugtag event. TEAM PGFD has selected IAFF Local 1619 Burn Fund as their charity with a goal of raising $5,000.  To help raise funds, TEAM PGFD has designed a tee-shirt that is available for sale.  The tee-shirt has been approved by Fire Chief Marc Bashoor.  He has approved the shirt to be worn as an official work shirt during the month of September.  To view the tee-shirt and order on-line for home delivery, please, click here.

The National Red Bull Flugtag is scheduled for Saturday, September 21, 2013, and 1 of the 5 nationwide events will be held at the National Harbor. This is the first time for the event being in the National Capital Region. The Harbor’s event is in conjunction with 4 other Flugtags taking place in Miami, Chicago, Dallas/Fort Worth, and Long Beach, CA. More than 1300 teams from all over the country applied to take part in this competition, but only 30 were selected from each city. TEAM PGFD is the only Fire/EMS Department themed entity to make the cut.

We hope to sell as many TEAM PGFD Flugtag shirts as possible to demonstrate our support and to raise funds for a worthy cause.

Posted by PGFD at 2:43 PM No comments: Links to this post

The Prince George's County Fire/Emergency Medical Services Department recently had two members that have successfully completed and graduated from the County Police Academy.  The two Fire Fighter/Medics are in the process of becoming the Departments newest additions to the position of Fire Investigator.

Fire Fighter/Medics Justin Shea and Jennifer Lawhorne were two of the forty-seven recruits from the Prince George’s County Police Department’s Basic Training Session #123.  Graduation ceremonies were held on Tuesday evening, July 23, in Upper Marlboro.
The pair of Fire Fighter/Medics graduated as Law Enforcement officers that are certified by the Maryland Police and Correctional Training Commission to enforce the fire and explosive laws of the State of Maryland and Prince George's County Maryland. They learned every skill that a County Police Officer learns in the academy.  In order to become Fire Investigators the pair must also obtain certification to enable them to determine the cause and origin of fires and explosions.


Shea and Lawhorne will join an experienced and talented team of personnel assigned to the Fire Investigations Division within the Office of the Fire Marshal.   This office reports to Deputy Fire Chief Scott K. Hoglander, Commander of the Support Services Command of the Fire/EMS Department.

In addition to Fire Chief Bashoor and Deputy Fire Chief Hoglander many personnel  from Fire Investigations attended the graduation ceremony.


Posted by PGFD at 2:00 PM No comments: Links to this post