Media Contact: Mark E. Brady, Chief Spokesperson, 240-508-7930
One person was killed and another injured in a 3-vehicle crash on the Capital Beltway in Forestville.  Just after 11:00 pm, Tuesday, February 15, 2011, Fire/EMS units were alerted to a motor vehicle crash on the Beltway Inner Loop at the Darcy Road bridge in Forestville.  Units arrived to find the cab of a tractor trailer well involved with fire after hitting the bridge support columns.  The fire extended from the truck cab to the underside of the bridge.  Sheets of plywood and wooden supports had been previously installed on the underside of the bridge to prevent crumbling concrete to fall onto the Beltway.  Brush fires ignited and travelled up the embankments towards Darcy Road.  Firefighters were successful in stopping the fire extension into the trailer portion of the 18-wheeler.  The trailer was about 25% loaded with bags of sugar.

Incident commanders immediately requested additional resources to the Beltway and to Darcy Road to deal with the fire.  A total of 60 firefighters and medics were on the scene on-board 10 pieces of apparatus and numerous command and support vehicles.  Both loops of the Beltway and Darcy Road were shut down while the fire was being extinguished which required about 45 minutes.  The outer loop reopened at around midnight.  The inner loop and Darcy Road remained closed until firefighters cleared the scene around 3:30 am.  The Maryland State Police are investigating the crash and the Maryland state Highway Administration were coordinating the clean-up and inspection of the bridge.  Most Beltway lanes and Darcy Road have since been reopened.

A driver of one of the civilian vehicles, an adult male, late 20's, was transported to an area trauma center with non-life threatening injuries.  After the fire had been extinguished, the driver of the tractor trailer was pronounced deceased on the scene still inside the truck cab.  Additional information about this incident can be obtained by contacting the Maryland State Police- Forestville Barracks. 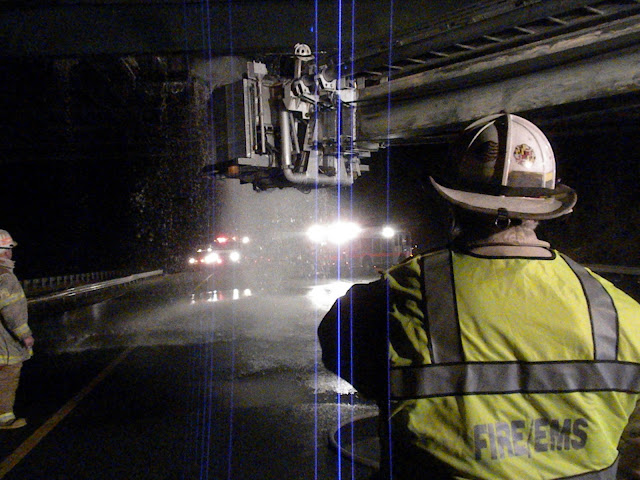 1 Killed When Tractor-Trailer Strikes Overpass Along I-495 Near D'Arcy Road: MyFoxDC.com
Posted by PGFD at 1:14 PM No comments: Links to this post