Prince George’s County Firefighters extinguished two home fires this morning caused by residents trying to stay warm.  Temperatures the last couple of nights have dropped below or near the freezing mark and some residents resorted to standard forms of staying warm.

At about 7:45 this morning firefighters were alerted to a house fire in the 6700 block of Seat Pleasant Drive in Seat Pleasant.  Firefighters arrived to a 2-story single family home with smoke showing.  As soon as firefighters forced open the front door a wall of fire blew out of the front door and over their heads.  Firefighters advanced hose lines into the house and quickly knocked down the fire.  A search of the home was performed with no occupants located.  Unfortunately 2 family dogs were found deceased and a cat was missing.  Fire Investigators determined that a electric space heater was too close to combustibles which ignited.  Preliminary fire loss estimates are $50,000.  No one was home when the fire started, however, 2 adults and 2 children will be displaced.  They received some relief from the American Red Cross and will be staying with other family members.

At around 9:30 this morning firefighters were alerted to a house fire in the 4800 block of Megan Drive in Clinton.  Firefighters arrived at the 2-story home and found a working chimney fire.  The occupants had a fire burning in the fireplace with fire extension into the attic area and behind the walls.  The fire was quickly extinguished but not before firefighters had to do some extensive overhaul to extinguish the fire in the walls.  Four adults and 1 child are displaced.  Often times a malfunctioning chimney with missing mortar or bricks can allow heat and hot embers to escape into walls and the attic igniting a fire.  No one was injured in this fire that caused an estimated $40,000 in fire loss.

The Prince George’s County Fire/Emergency Medical Services (EMS) Department (PGFD) is reminding everyone that home fires are more prevalent in cold weather than in any other time of the year. This is due in part to an increase in cooking and heating fires.  This reminder involves the safe use of space heaters and general heating safety tips.

The civilian, volunteer and paid men and women of the Fire/EMS Department want to remind everyone that fire safety and prevention are especially important during times of cold temperatures.

The Winter Residential Building Fires report released by USFA in 2010, reports an estimated 108,400 winter residential building fires occur annually in the United States, resulting in an estimated average of 945 deaths, 3,825 injuries, and $1.7 billion in property loss.  Cooking and heating are the top causes of fires during cold weather.

“Colder temperatures during the Fall and Winter Season brings the highest number of home fires than any other time of year,” said Fire Chief Bashoor. “Each season, home fires increase in part due to cooking and heating fires. Fire safety and injury prevention must not be lost in an effort to stay warm. Stay warm and do so safely.  Safety First ensures everyone goes home.”

• Buy only heaters evaluated by a nationally recognized laboratory, such as Underwriters Laboratories (UL).

• Check to make sure it has a thermostat control mechanism, and will switch off automatically if the heater falls over or if placed too close to an object.

• Heaters are not dryers or tables; don't dry clothes or store objects on top of your heater.

Always unplug your electric space heater when not in use.     Turn off at night or whenever you sleep.
Never use an extension cord with space heaters - plug directly into wall socket.

Never refuel indoors.
Remove the kerosene heater outdoors, turn off and wait for it to cool down before refueling and only use the correct type of fuel.

•    Furnaces, fireplaces and chimneys should be cleaned and checked each year by an appropriate professional prior to using.  Clear away any clutter from these heating devices, at least 3 feet away.

•    Only use seasoned wood in fireplaces, never use ignitable liquids to start a fire and do not overload your appliance.

•    The 3-foot rule also applies to furnaces and fireplaces.  No combustibles items within 3 feet of these heating appliances.

•    Dispose of fireplace ash into a metal container and store outdoors away from structures on a concrete surface.  Fireplace ash can ignite a fire days after they have been discarded.

Finally, ensure your smoke and carbon monoxide (CO) alarms are working by pushing the test button on the front cover.  Your alarms should be tested monthly on the first day of every month - Safety First Day of the Month.  If you do not hear an audible warning, replace your alarm with a new 10-year, tamper proof, with hush feature alarm.  Having a working smoke alarm and a planned and practiced home escape plan dramatically increases your chances of surviving a home fire.

A working CO detector will protect you and your family from deadly "silent killer" fumes that may be building up in your home.  Remember to practice a home escape plan frequently with your family.

For additional information from the USFA on Winter Fire Safety; click here.usfire.gov.

Residents are encouraged to utilize Prince George’s County’s County 311 system to obtain information about public services and obtaining a smoke alarm installed in your home.

Posted by PGFD at 8:08 PM No comments: Links to this post

At around 12 noon today Prince George's County Firefighters were alerted to an apartment fire in the area of Prince Place and Campus Way South in Largo.  As firefighters searched the area additional 911 call were received reporting the fire in the 100 block of Greenmeadow Way.  First arriving units arrived at a 4-story sprinklered apartment building with heavy smoke coming from the roof.  Within moments of arrival heavy fire could be seen burning through the peaked roof of the building.  All occupants had escaped prior to the fire departments arrival.

Firefighters stretched hose lines up to the top floor and initiated an attack on the fire.   A 2nd Alarm was sounded but the majority of the work was performed by the initial personnel.   The majority of the fire was located in the attic area with some dropdown extension into the top floor apartment.  Sprinklers activated and water lines broke during the fire and overhaul causing flooding of lower level units.  The bulk of the fire was extinguished within 10 minutes of arrival.  The fire was completely extinguished in about 30 minutes.

No injuries were reported, however, 16 families will be displaced from the building of origin.  26 adults and 2 children will be displaced and working with complex management and the American Red Cross for temporary relief.   The fire appears to be accidental innate and a preliminary fire loss is estimated at $100,000.  The exact cause of the fire remains under investigation. 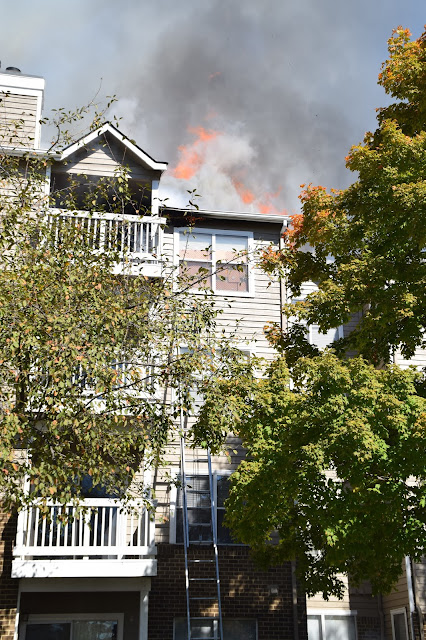 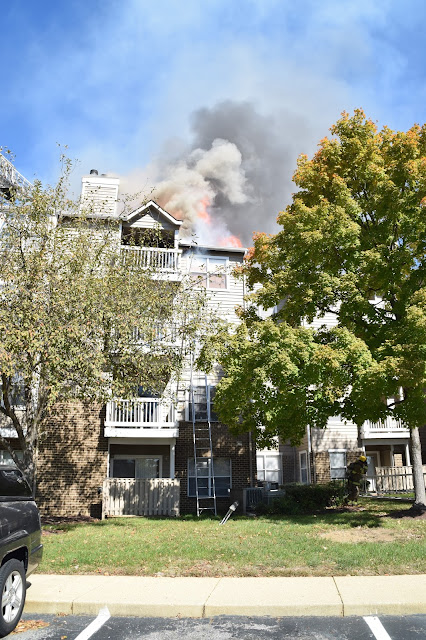 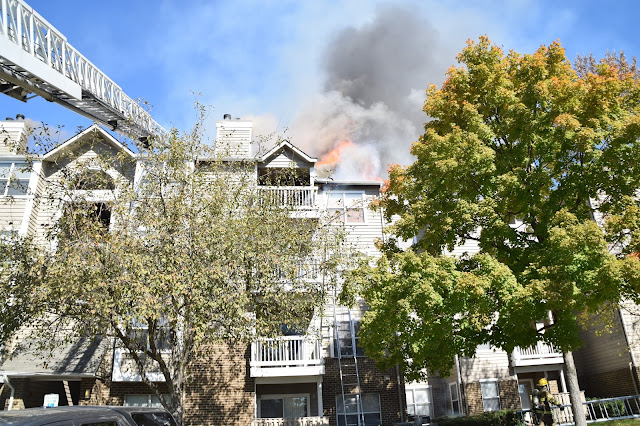 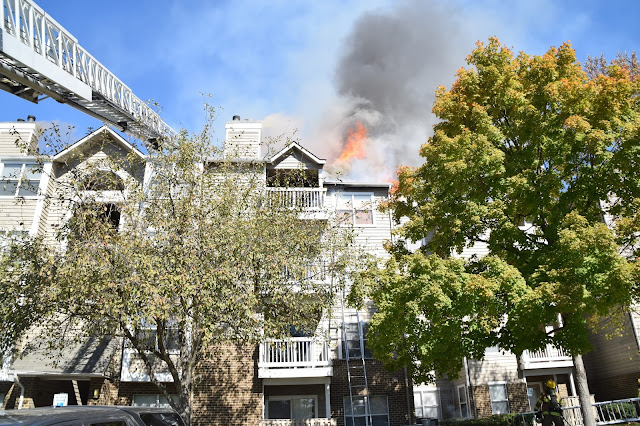 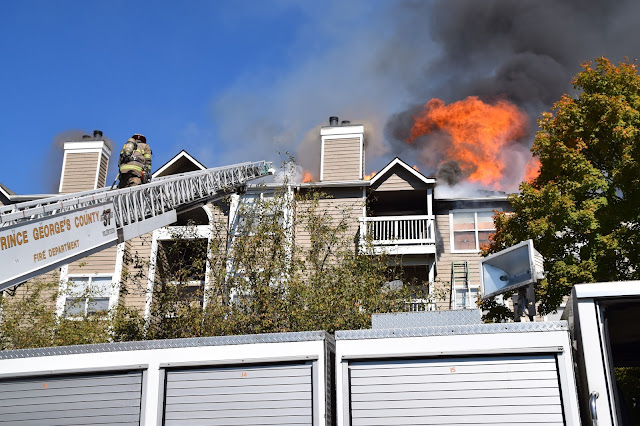 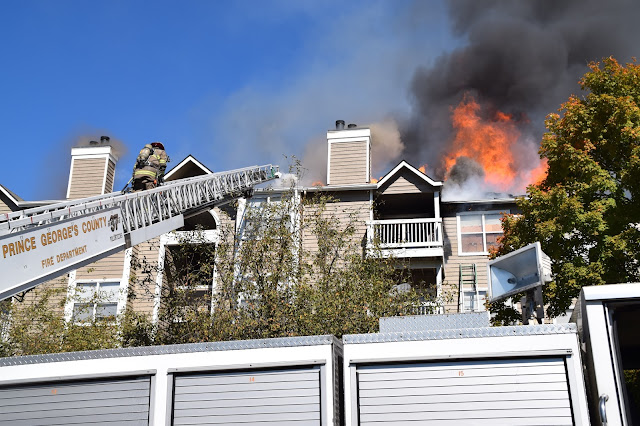 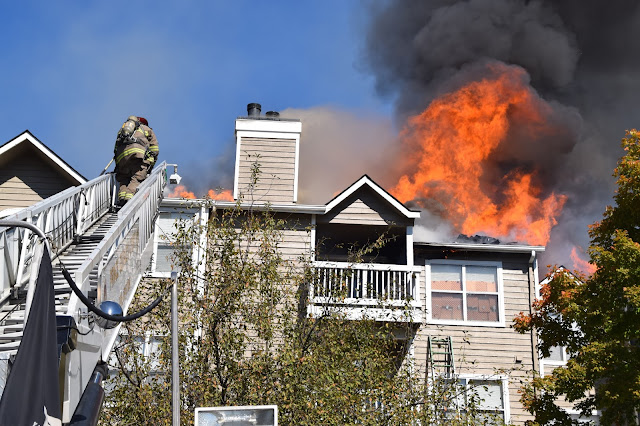 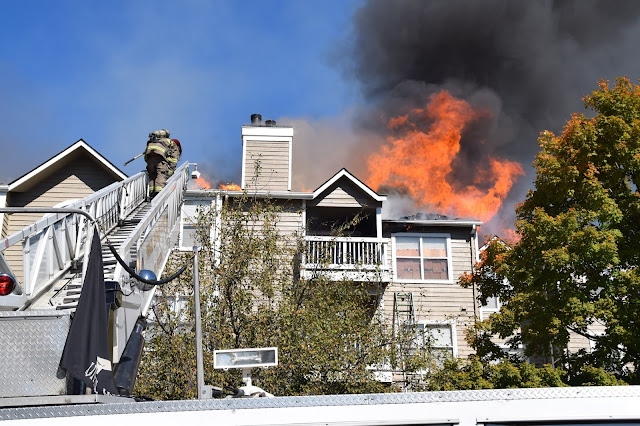 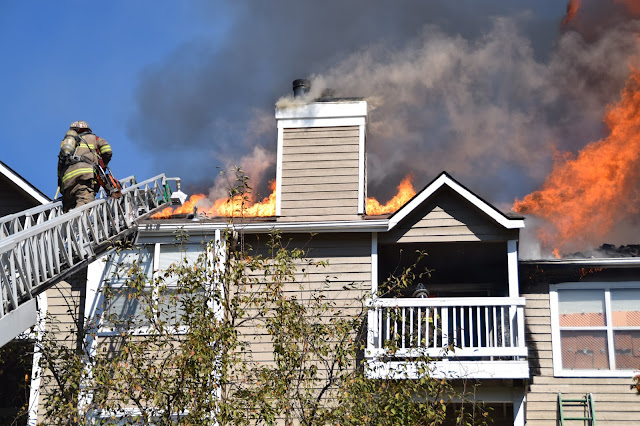 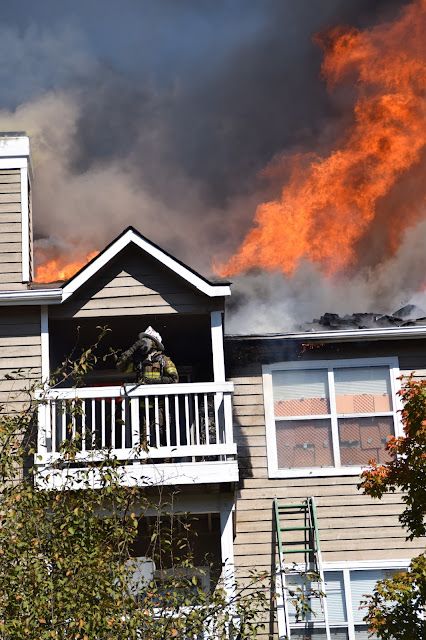 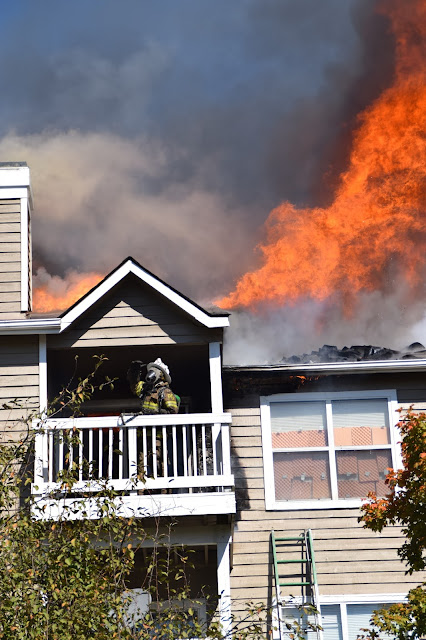 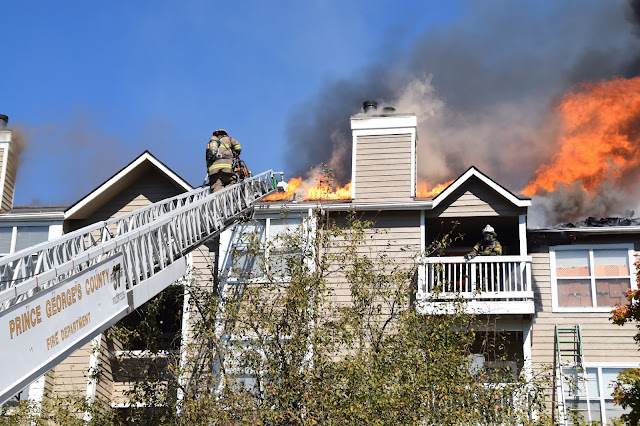 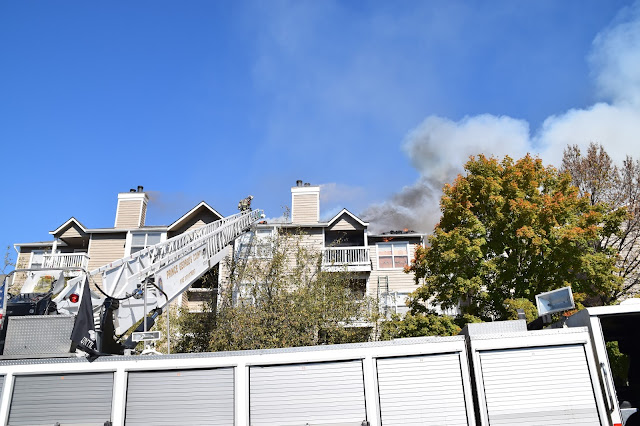 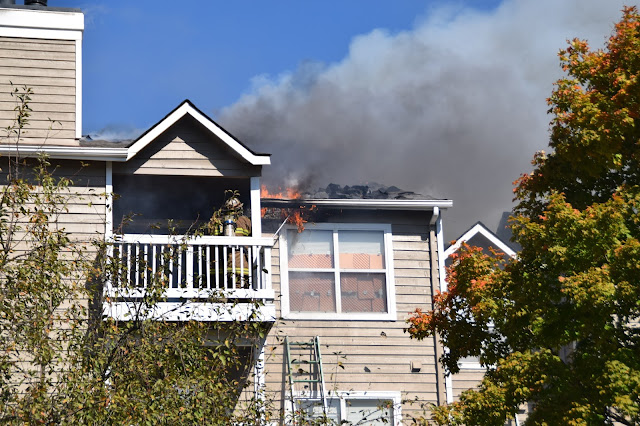 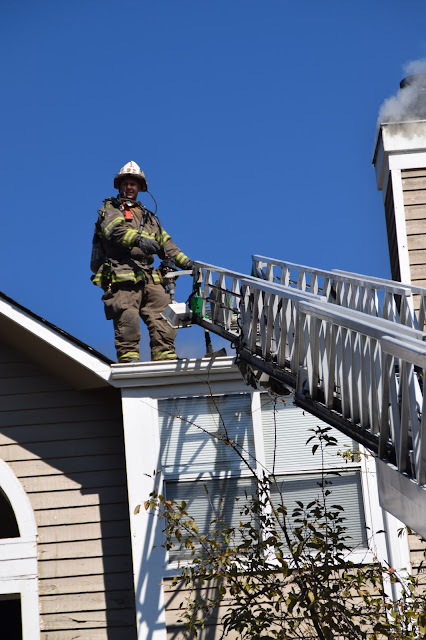 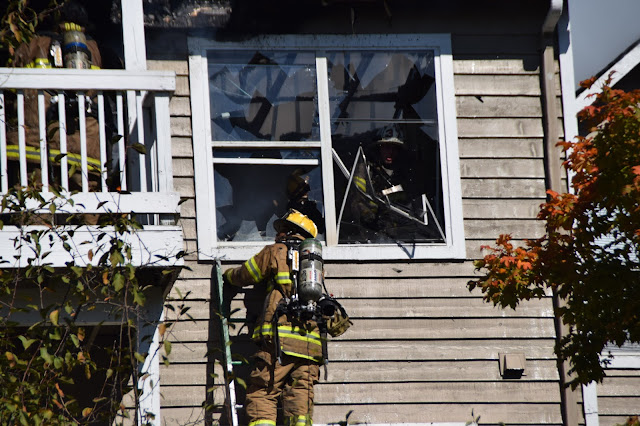 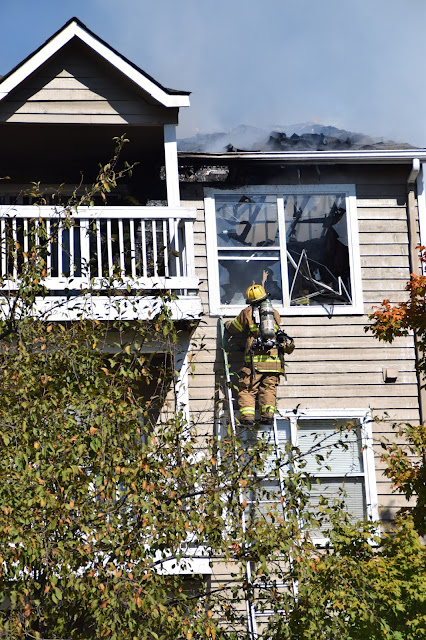 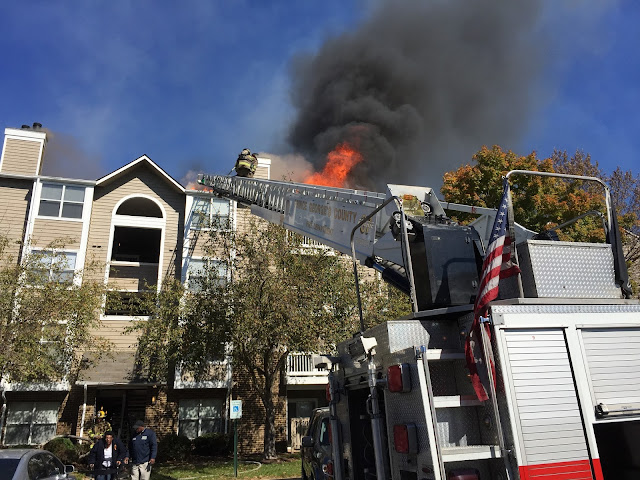 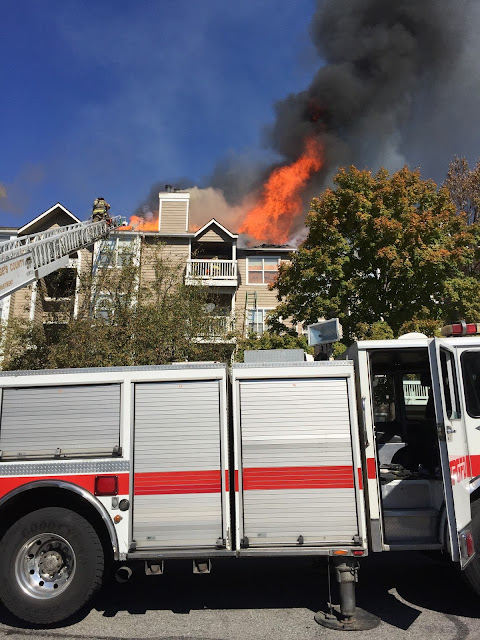 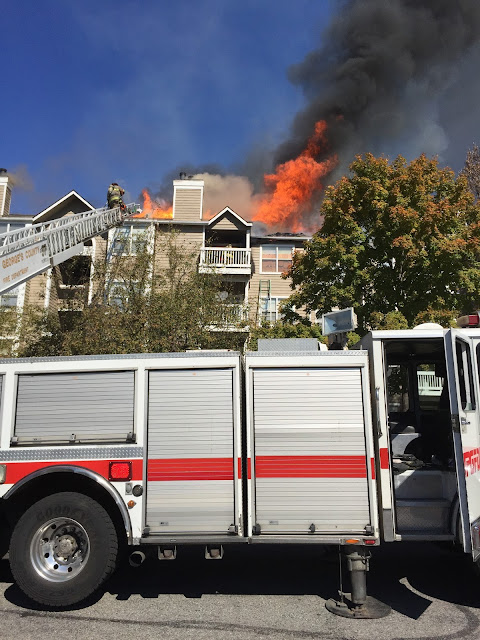 Posted by PGFD at 6:23 PM No comments: Links to this post