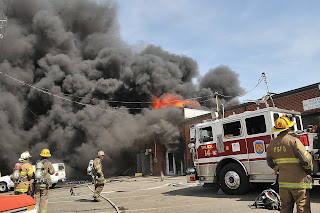 MEDIA CONTACT: Mark E. Brady, Chief Spokesperson, 240-508-7930
Firefighters encountered more then heavy smoke and fire at a Beltsville warehouse fire. Fire/EMS units were dispatched to Precision Cycle Works, 11323 Old Baltimore Pike, Beltsville, Maryland, for 911 reports of an explosion and fire at about 1:45 PM, Thursday, April 8, 2010. First arriving firefighters from Beltsville Fire/EMS Station 831 and Greenbelt Fire/EMS Station 835 were the first to arrive and observed heavy smoke from the roof area, towards the rear of the structure, of a 1-story brick, middle of the row, commercial warehouse. These units established a water supply and entered the structure with charged hoselines in attempts to extinguish the fire. Firefighters were updated that there was a quantity of handgun ammunition and re-loading supplies in the area where the initial explosion occurred. There were rapid and continuous sounds of the ammunition discharging and larger sounds of explosions with percussions felt by everyone inside or near the structure. A 360 exterior examination of the structure revealed bulging of the front garage door and rear wall, as well as, the roof assembly displayed signs that it had shifted. All of these observations indicated that a significant explosion had occurred. With heavy blinding smoke on the interior and a maze of walls and obstacles, firefighters could not immediately locate the seat of the fire. Coupled with inherent dangers of a fire in a large automotive repair warehouse and the report of the structural instability of the structure; incident commanders ordered the evacuation of all firefighters.

Master stream devices from 4 ladder trucks and ground based monitors flowed thousands of gallons of water into the burning structure. A 2ND Alarm was sounded bringing about 80 firefighters and paramedics to the scene. Firefighters from Montgomery County assisted on the scene. The fire extended into another automotive repair shop in the attached warehouse at 11325 Old Baltimore Pike before the blaze could be extinguished. It took about 90 minutes to knock down the bulk of the fire.

Safety considerations prevented firefighters from entering the structure for overhaul and complete extinguishment. Extensive overhaul and the investigation into the cause and origin of the fire will be delayed until equipment could be brought to the scene to secure the structure and allow firefighters and investigators to enter the building. These events could occur as early as Friday.

The building occupant of 11323 Old Baltimore Pike was an ATF licensed federal firearm dealer and had a significant amount of ammunition and firearms in a secured area in the rear of the shop. He is cooperating with Fire Investigators.

The Fire/EMS Department Hazardous Materials Team was called to the scene due to a quantity of petroleum products coming from the two effected warehouses and entering the sewer system along with the thousands of gallons of water used to extinguish the fire. The Haz-Mat Team deployed an absorbent boom across a creek where the water was being released into.

With high temperatures and intensive working conditions a key element in reducing firefighter injuries was the presence of the Canteen Unit and staffing by the Prince George’s County Ladies Auxiliary. Refreshing fluids and snack items were provided to maintain firefighter’s heath and stamina.

The cause of the fire remains under investigation with fire loss estimated at $1 million. No civilian or firefighter injuries were reported. 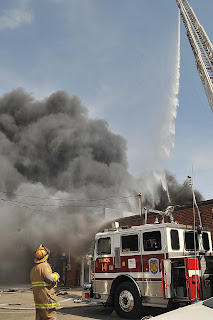 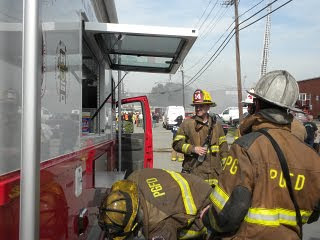 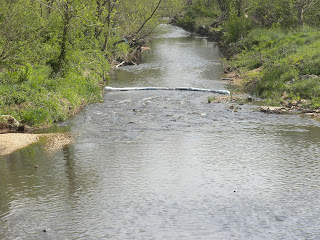 Posted by PGFD at 9:57 AM No comments: Links to this post