This story was authored by a Prince George's County Firefighter that suffered severe burn injuries while battling a house fire in Kettering four years ago.  A firefighter that had sustained such horrific burn injuries we were not sure he was going to survive.  He did survive and than we became concerned that he would never be able to return to work as a firefighter again, he did.  On the fourth anniversary of his sustaining burn injuries he has shared, on his Facebook page, his thoughts as he remembers them and we have reprinted them here.

For previous coverage of this story click here and here and here.  A Safety Investigative Team report of the incident can be read here.

In his own words, Fire Fighter Daniel McGown writes…..


Well boys n girls, men n women & guys n gals... Today marks another year since number 87 Harrington Drive almost took my life. As you can tell and feel from outside last night/early this morning, it was a beautiful, relaxing, cozy temperature, nothing can go wrong, amazing kind of night, much like it was this day 4 years ago, but obviously things did go wrong. It started out as a thought to be bread and butter auto fire (later determined to be intentionally set) in an attached car port that turned out to be a snot slinging house! Things went bad, the smoke and soot I took in after I thought I was outside and removed my regulator to stop my throat from burning screwed me up and disoriented me to the point where I did not know what to do but scream at the top of my lungs, bloody murder for help!


As I bashed and pushed myself into the full length brick wall 5+ times, and what felt like slowly losing consciousness as I couldn't hold my self up anymore and slowly sliding down that wall, hoping to fall thru it to the exterior or fall out of a window, I did not know what to think other than "How can I get out of this situation and is this really how it's going to end?!?!" I have never said what I was thinking, because well that my friends, is not a pleasant thought! After I was discovered by Joe Brown via. my P.A.S.S. device/alarm and removed by him, Pat Mann, and Tim Moore in the interior of the home, with Curtis Patterson and Peter Johnson outside on ladders, I regained consciousness, only to first yell at them to stop cutting my coat. I was under the impression I had made it out on my own.

As I looked up, and saw Lt. Doug Sudik and his crew from Truck Company 26, the drivers from 33 and the crew from Medic 46, alls I could do is wonder, 'why do they look so concerned?!?! I know I burned my ears, but damn.' It wasn't until I was loaded into the back of Medic 46 and saw Jamieson Scarlata, Daniel Robinson, and EMS Captain Danny Hughes, an asked them, "how bad am I really?". Im not sure who, but I think one of them said, "well, its not great..." At that point, I couldn't be more thankful to have them, some of the best paramedics in Prince George's County, and probably the Nation watching over me and providing me with amazing pre-hospital care.

When we were on Michigan Avenue N.W. around North Capitol Street I believe, I still couldn't understand or fathom how bad it could be, but realized I was clutching the non-rebreather mask against my face and emptying the bag as quickly as it was filling up because my throat was slowly starting to swell up and getting harder to breath that I had thought to my self 'this must be pretty bad!'. Once at the hospital, I still had no clue how bad it really was, until I woke up a day later with a tube shoved down my throat, arms in soft restraints, and my hero an role model, my father, sitting next to me explaining what had happened, how bad it really was and to just try my best and relax and not pull the tube out. As the days went on, many of you know my expected out come became better and better. Initially, family and friends were told to come in and say their good byes. If it were not for the men on the fire ground and Medic unit along with the men and women of the Washington Hospital Centers Burn Unit, I would not be alive, here/now today to type this. As I have said in the past, not many days go by that I do not think about that horrible morning, that I was almost taken from this great place.

As it always has since this the morning of April 8th 2009, and as it always will till the day I die, I am forever thankful to the men who effected the rapid and safe removal of me, the men who provided not only exceptional pre-hospital care, but the most amazing comfort and re-assurance while en-route to D.C., keeping me calm and preventing me from freaking out. But also the men and women of the Burn Unit, and the men and women of the Washington D.C. Firefighters burn foundation who made this horrible experience for my family and friends as easy and painless as humanly possible. Because of everyone's involved knowledge, training, RESCUE SQUAD 33's driver Curtis Patterson's gut feeling to throw a ground ladder to the furthest window from the bulk of the fire and precision skills by all involved,

I was able to return to work one day short of the three month mark and more importantly, able to live and love another day! NO MATTER WHAT PART OF THE WORLD YOU ARE IN, WHO YOU RUN/RIDE WITH, TRAIN LIKE YOUR LIFE DEPENDS ON IT, BECAUSE WELL GUYS N GALS, IT DOES!!! In a training scenario, place your self in the most screwed up, beyond reasonable comprehension, zero visibility environment, and un-screw your self! From what I have seen/read, it seems to be the "bread and butter" alarms that get us!!! Never be complacent, try your best to know where you are and your way out! Remember the basics, it will save your life!!! As always, thank you to those involved, those who sent prayers and well wishes for my family, friends and myself, both in person and in spirit, as well as across the WORLD, but also to the North Beach Volunteer Fire Department for taking care of my families house chores while they stayed by my side from 4 A.M.

April 8th to the day I was released, and any others I may have forgotten!!! As my father said during my release from the hospital interview with the news, he has been on the opposite side of this many times during his 24 year career, the last 13 being a part of the Command Staff, and was never really sure if the support system they (the Prince George's County Fire/EMS Department) provided really worked, but being on the receiving end, it showed it really did. I, and I am sure along with him, thank everyone, big an small, near and far for your support during this very trying time for me, but more importantly my family and friends!!!!!!!

Please excuse and spelling or grammar issues as I am typing this with shaking hands.. 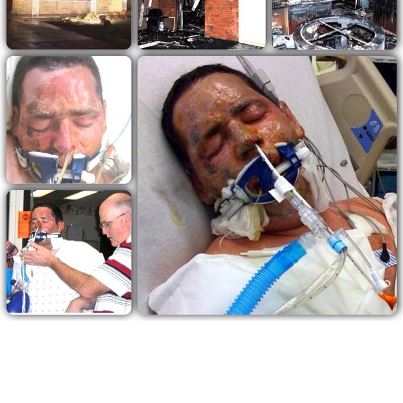 Posted by PGFD at 10:15 AM No comments: Links to this post