This years National EMS Week is May 18 through 24.  The theme is, "EMS: Dedicated.  For Life." National Emergency Medical Services Week brings together local communities and medical personnel to publicize safety and honor the dedication of those who provide the day-to-day lifesaving services of medicine's "front line." This information can be used throughout the year for public education and safety programs.

The Prince George's County Fire/Emergency Medical Services (EMS) Department has a large contingent of personnel that demonstrate "dedication" in every aspect of their job.  Every firefighter is also trained, at a minimum, as an Emergency Medical Technician (EMT).  Many continue their medical training and become fully accredited Paramedics that can administer medications, apply 18 lead EKG's, read EKG's, defibrillate, maintain airways and many more pre-hospital advance life support measures.

The Fire/EMS Department invites our media to join us in celebrating EMS Week.  Consider an interview with our recently awarded Gold Medal in EMS Excellence and Paramedic of the Year Katie Johnson, our Medical Director Dr. Terry Jodrie, our EMT, Paramedic Instructors or any of our recent recipients of medals for Excellence in EMS.  Consider riding along with our paramedics and witness first hand what a day in the life of a paramedic is all about,

Whatever it is you would like to do to highlight our EMS Staff this is the time of year to make it happen.  To set up interviews, phone or in-person, live or taped, and to set-up a ride-along with a Paramedic unit please call (240-508-7930), or email me at mebrady@co.pg.md.us.

Interviews and ride-along can be done at anytime starting today through the end of EMS Week.

GOLD MEDAL FOR EXCELLENCE IN EMS


Over the past year, Fire Fighter/Medic Technician Johnson became a county certified paramedic.  On the morning of August 7, 2013, Paramedic Johnson was off duty and driving down a narrow, one-lane road known for deadly motor vehicle accidents, she came across upon a Camaro that had crossed the center line and collided with an SUV in a T-bone style collision.  The scene was still, without any movement from either vehicle and no rescue vehicles in sight. Johnson immediately stopped her own vehicle and sprang into action.  She sized up the scene and called 911, relaying imperative information to ensure additional units and a helicopter were dispatched.
Despite not having any personal protective equipment, Johnson grabbed a small first aid kit from her vehicle and headed to the most damaged car.  Inside the Camaro were three sisters, ages 20, 17 and 10.  They had been on their way to an appointment for senior portraits.  The 17-year-old passenger suffered the full force of impact and was completely entangled in the wreckage.  Technician Johnson checked for signs of life and found none.  Being alone, she had to make the extremely tough decision to move on and help the other victims.
The 20-year-old driver was motionless and not breathing.  She felt for a pulse and adjusted the airway so it opened, and the girl took a breath.  Recognizing her breathing was inadequate, she used a CPR mask provided by police who were now on the scene.  Johnson provided ventilations and maintained an open airway until another unit could arrive and take over patient care.
Johnson could hear the moans of another victim that could not be seen.  A 10-year-old girl, Peyton Curl, was underneath the vehicle wreckage.  Again without the protection of personal protective equipment, Johnson entered the vehicle and started to remove items from around the victim.
As more units and personnel arrived on the scene, Johnson was able to perform a rapid trauma assessment, vitals, establish an IV, and give pain management drugs.  But, most importantly, she was able to keep the 10-year-old girl calm and still during the tedious extrication process.   She guided the placement of hydraulic tools assisted with operations from her position inside the vehicle, due to the limited access of the operators.  After a 20-minute extrication process, the child was removed from the wreckage.  Johnson accompanied the girl into an awaiting BLS transport unit and continued patient care with other providers, including stabilization of fractures, establishing additional IV with fluid therapy, and other Advanced Life Support capabilities.  She remained with the child until the unit was ready to transport to the helicopter landing zone.
If not for Fire Fighter/Medic Johnson’s immediate actions, there would have been two fatalities.  Her ability to stay calm and perform her duties, command a scene, and instruct others in the extrication of these severely injured girls deeply impacted the outcome of the situation for the.  Without bodily protection, she selflessly placed herself in harm’s way, where she remained until the last patient was removed.
For great personal risk and outstanding execution of advanced life support, Fire Fighter/Medic Katherine P. Johnson is awarded a Gold Medal for Excellence in EMS and is recognized as 2013 Prince George’s County Fire/EMS Departments Paramedic of the Year.

Prince George’s County Firefighter/Medics and the Departments Hazardous Materials Team were alerted at around 2:30 am, Thursday, May 1, 2014 that a CSX train carrying a reported 8,000 tons of coal had some cars leave the track.  Fire/EMS units arrived to the scene not far from the Brady Building at Old Annapolis Road and Laurel Bowie Road in Bowie and confirmed that 3 locomotives and 10 cars had left the tracks but were still upright, not overturned.  The 3 employees on the train were accounted for and were not injured.

There were no immediate life safety concerns or haz-mat issues.  The scene and clean-up were turned over to CSX officials.  The Fire/EMS Department will continue to monitor the situation throughout the day. 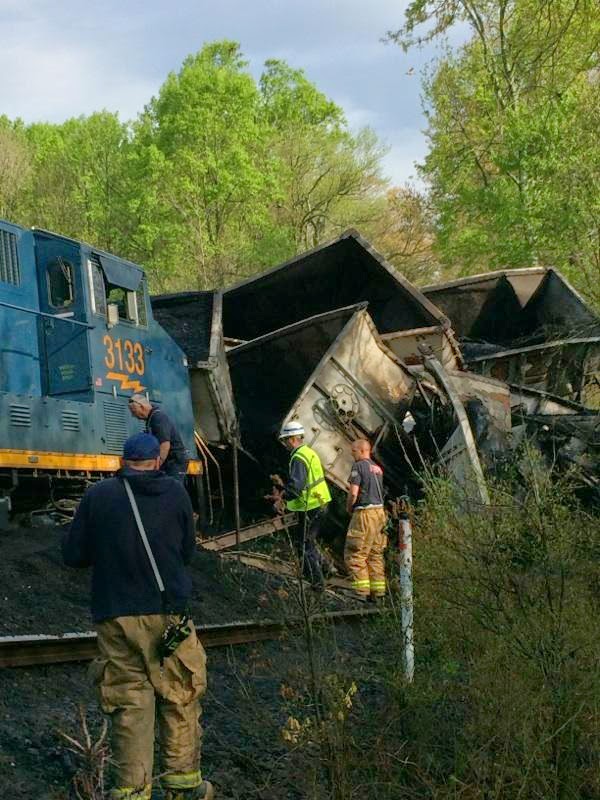 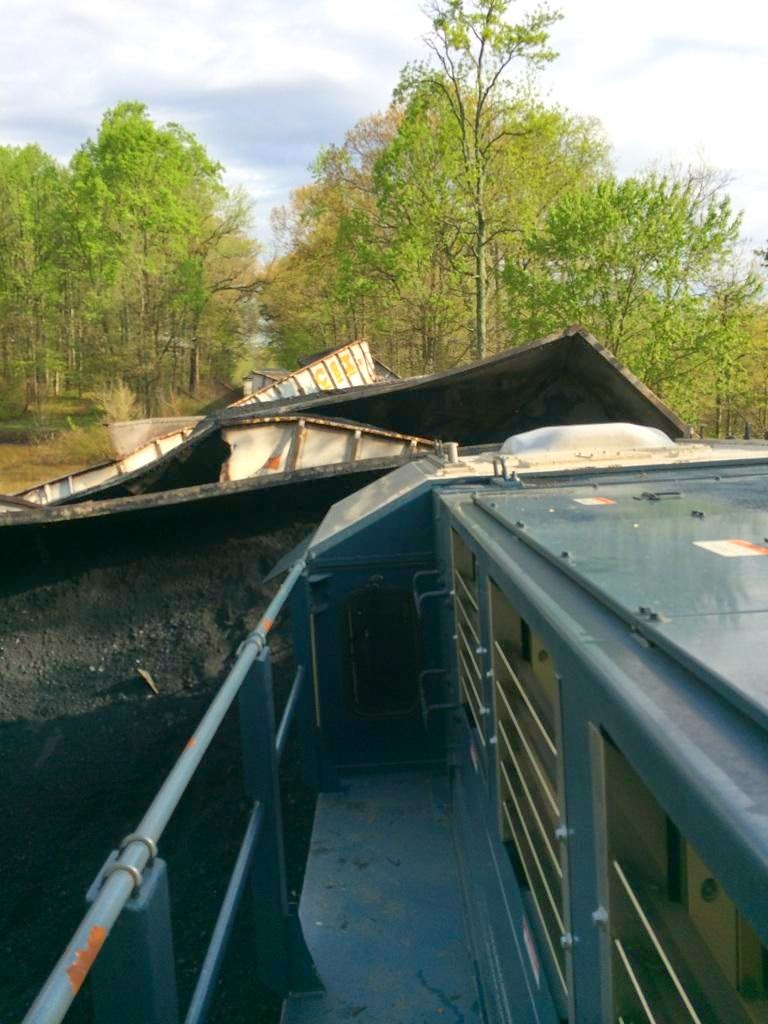 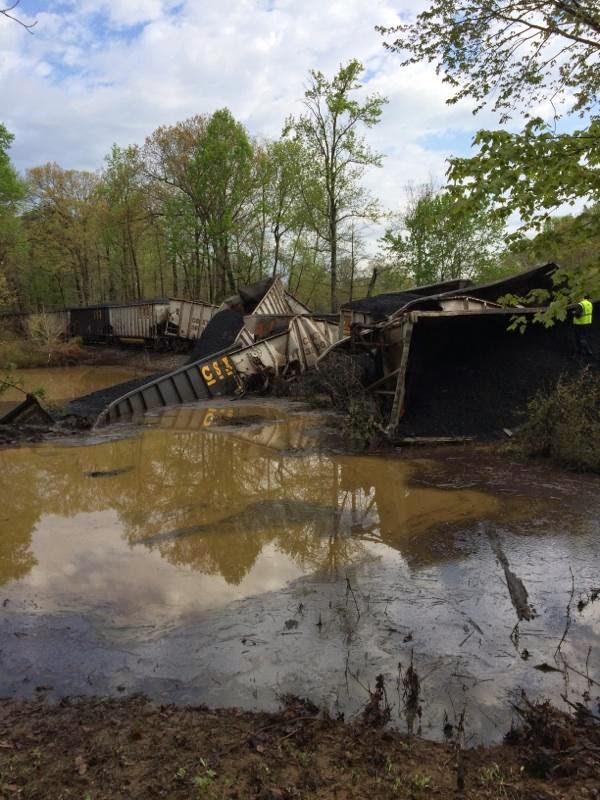 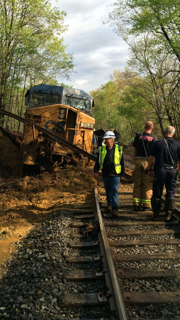 Posted by PGFD at 7:28 AM No comments: Links to this post

A Laurel family escaped a fire this morning without injury.  Just after 3:00 am, Thursday, May 1, 2014, firefighters arrived at a 2-story single family home in the 11700 block of Randy Lane with fire showing.  It appears that a fire started on their outside deck and spread to the wall of the house and eventually up into the attic of the house.  It required nearly 1 hour before the fire was declared out.  The family had escaped prior to the Fire Departments arrival.

Fire Investigators have ruled the fire as accidental with an estimated fire loss of $80,000.  The 2 adults and 1 child were able to make their own temporary living arrangements. 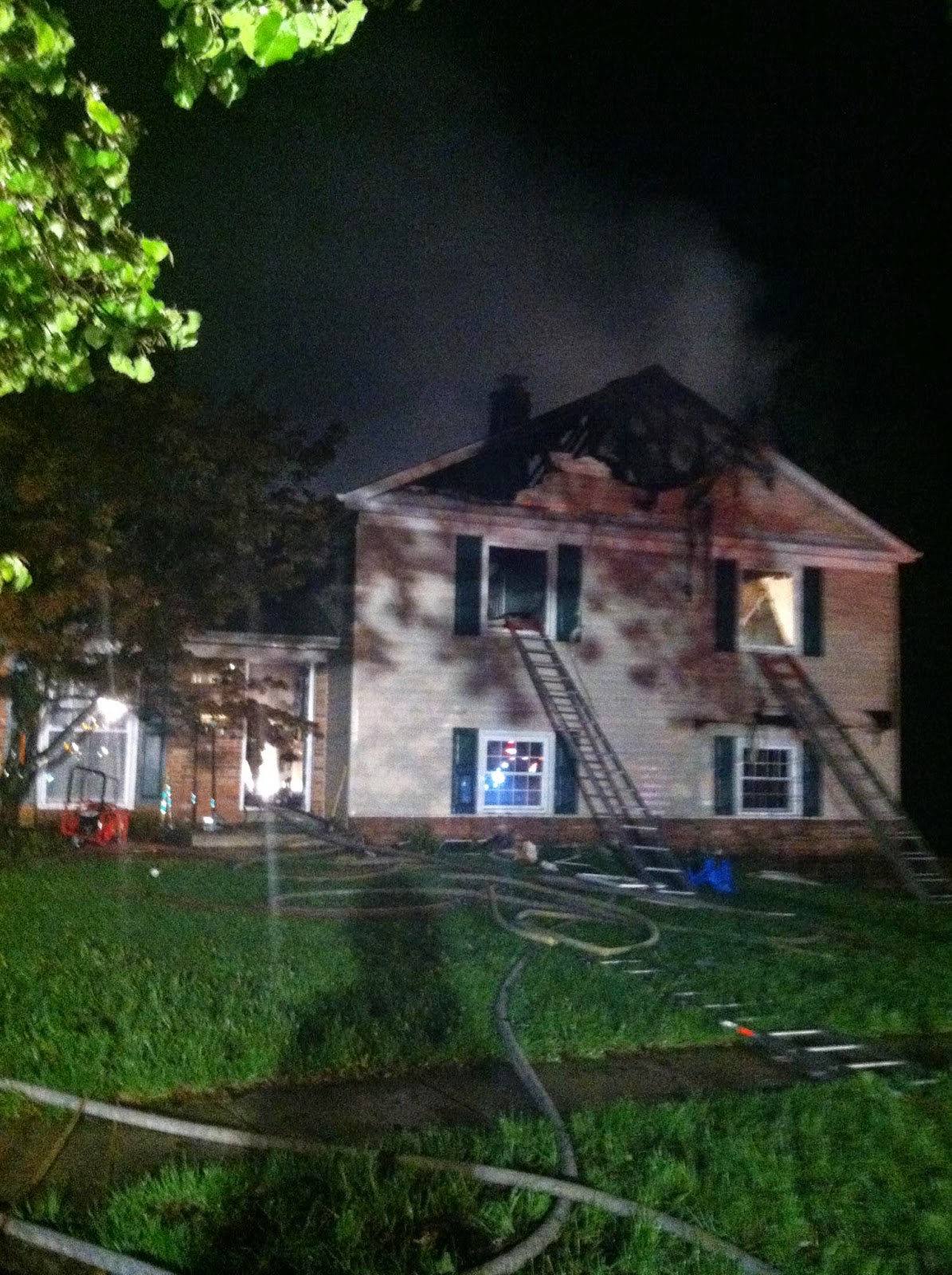 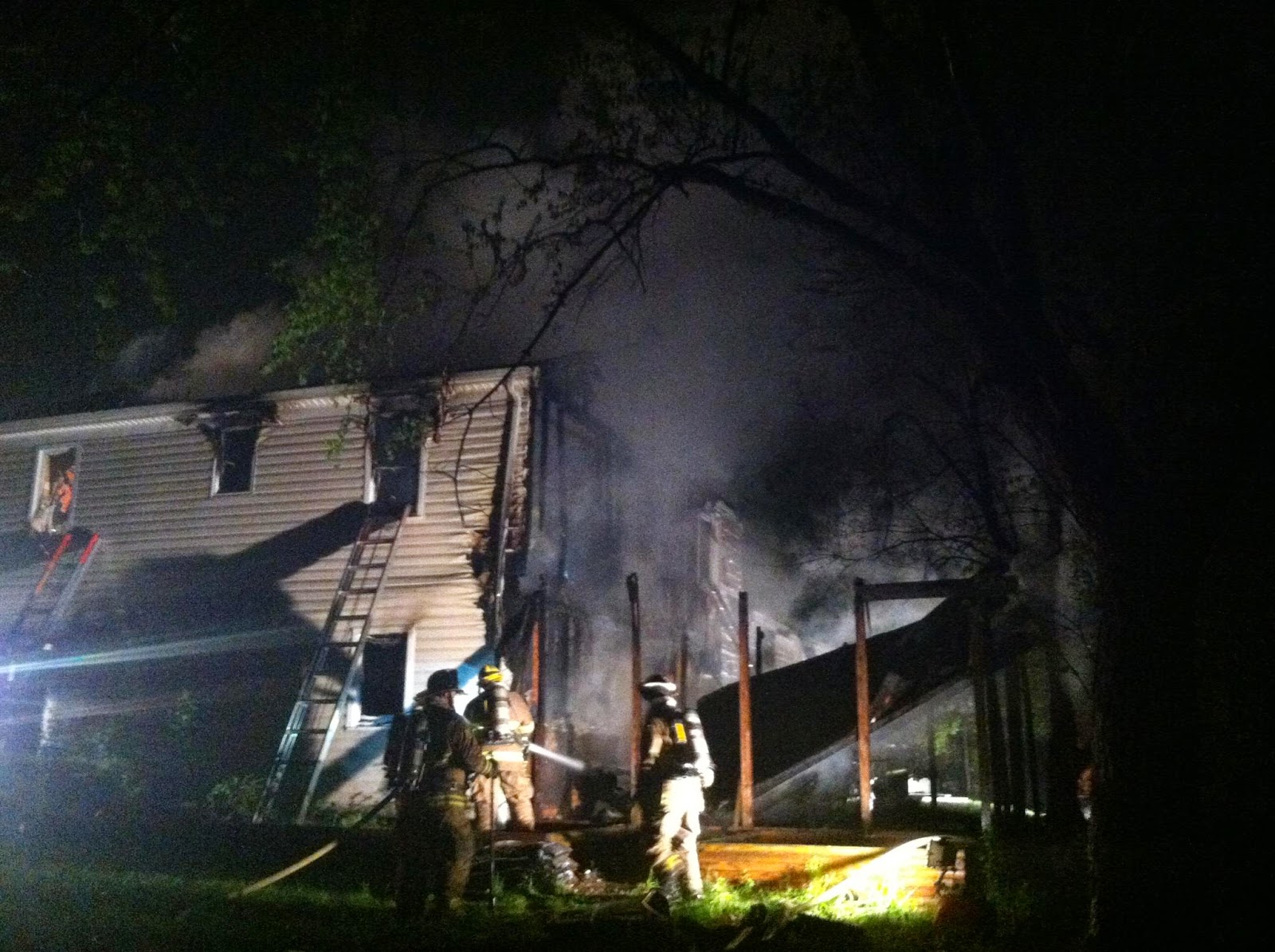 Posted by PGFD at 7:14 AM No comments: Links to this post

The first day of the month of May has arrived.  While May 1 has many different intentions for people, it is the day we ask you to simply test your smoke and CO alarms to ensure they are working.  Push the test button on the face of each alarm.  You should hear an audible beeping sound.  This indicates your alarm is good until next months test.  If there is no audible warning, provide fresh batteries, or consider replacing your alarm with a new 10-year, tamper proof, with hush feature smoke and/or CO Alarm.

This month we are including a message from Marc S. Bashoor, Fire Chief, Prince George's County.

In the past year there have been significant enhancements in both the State and County Fire codes, which will soon mean new things for Prince George's County residents.

In the past 3 years at least 6 residents of the Prince George's County have lost their lives to carbon monoxide poisoning.  This legislation gives our residents 1 more chance to get out of their homes alive in times of danger.

The other important legislative effort on the horizon will require smoke alarms with sealed 10-year lithium batteries.  This law takes full effect in January 1, 2015 for 1 nd 2 family residential homes.  These units will provide a significant enhancement in alarm reliability that will undoubtedly save lives.

Our Safety First Day of the month program meets public information tips and firefighters with County residents in an electronic and door-to-door foot campaign.  We provide fire safety tips and check for working smoke alarms.  That efforts combined with our Neighbors-Helping-Neighbors program have shown dramatic results in our residents’ safety.  We recognize as a fire service, we cannot do this alone.  At every community event, homeowners association meeting, and at any other event we can - including today, we ask out residents to check their own smoke alarm, and then go next door and check their neighbors and those less able to help themselves.

The Safety First Day of the month and Neighbors Helping Neighbors programs are being credited today with lowering our residents fire deaths to record lows, with only 1 fire death recorded so far this year in Prince George's County.  A total of 13 were recorded in 2013.

Those results are indeed dramatic, and as demonstrated by 11 recent smoke-alarm-saves, I submit to you today that 11 families are alive and well because their working smoke alarm gave them time to get out of their homes before fire took hold.  Several of these saves were installed by our firefighters as part of the Safety First program.

We depend on donations to fund these efforts, including recent donations of 83 alarms by the PGCVFRA Ladies Auxiliary for the Christmas in April program, 150 alarms by the IAFF, and annual donations from our corporate partner, PEPCO.  PEPCO alone has contributed over 10,000 alarms to the PGFD since they began partnering with the Fire Service.

I want to thank KIDDE, the manufacturer of many home safety products, for continuing to partner with us and the National Fallen Firefighters Foundation.  Today, KIDDE is donating 50 combination smoke and carbon monoxide alarms to our Safety First program.

We will be going door-to-door on Wednesday, May 7 and I want to remind our residents that fire is everyone's problem.  Together we will continue to drive down fire fatalities and improve our communities’ safety.

Marc S. Bashoor, Fire Chief, Prince George's County, MD
Posted by PGFD at 5:30 AM No comments: Links to this post