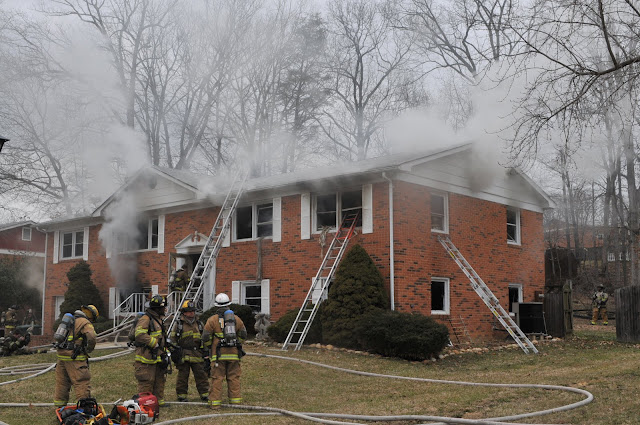 Mark E. Brady, Chief Spokesperson, 240-508-7930
Community residents of the Mary Catherine Estates in Clinton called 911 this afternoon alerting firefighters that a neighbor’s house was on fire. Just after 3:00 PM, Tuesday, March 2, 2010, firefighters from Clinton and surrounding communities arrived in the 3300 block of Accolade Drive and encountered a 2-story, non-sprinklered, single family home with fire on the lower level with extension to the upper floor. Heavy smoke was coming from the attic and windows as firefighters stretched hoselines inside the structure. Interior visibility was near zero from thick black smoke with high heat conditions as firefighters searched the house for any trapped occupants and for the location of the fire. The fire was soon located on the lower level and extinguished. No residents were home and no injuries were reported.

A family of four, 2 adult females and 2 children, will be displaced and are being assisted by the Fire/EMS Departments Citizen Services Unit and the Red Cross with temporary shelter.

In addition to Clinton Fire/EMS Station, Fire/EMS units from Allentown, Accokeek, Brandywine, Oxon Hill #842, Morningside and a unit from Charles County assisted in the extinguishment and overhaul of the home. Incident Commanders requested a Fire Task Force which resulted in Fire/EMS units from Silver Hill, District Heights and Forestville as well as an ambulance, paramedics and EMS supervisors to the scene. There were 40 firefighter/medics on the scene that required 15 minutes to knock down the bulk of the fire. 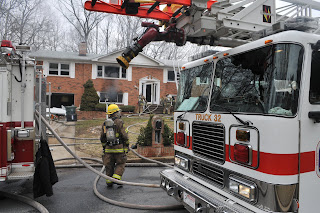 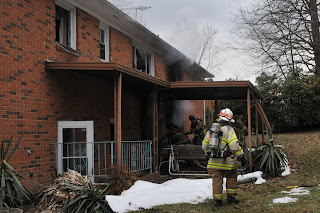 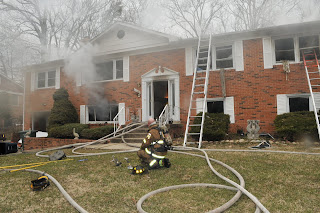 Posted by PGFD at 5:17 PM No comments: Links to this post 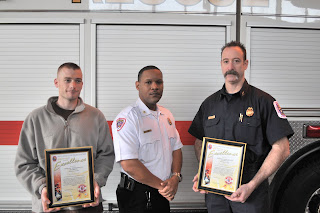 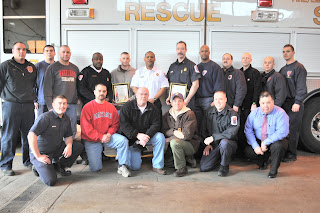 Mark E. Brady, Chief Spokesperson, 240-508-7930
The personnel of Prince George’s County Fire/EMS Departments Technical Rescue Services Team (TRS) received a commendation and acknowledgment for their hard work and dedication to the citizens and residents. Major Rudy Thomas presented the personnel with plaques recognizing the excellence of personnel for their work ethic and professionalism in several recent incidents. These incidents included the rescue of a teen aged male from a snow covered steep incline, the rescue of an unstable male from the Northwest Branch, the removal of individuals that had slid off the roadway and down an extremely steep incline in Largo; twice, and the rescue of 2 dogs from deep confined spaces on separate incidents. These rescues were in addition to the dozens of collapse calls responded to during the record heavy snowfall of February 2010.

The Departments Technical Rescue Services Team responds to incidents involving; confined space, high-angle, swift water/water, trench rescue, collapse and any rescue requiring the application of special knowledge, skills, and equipment to safely resolve unique and/or complex rescue situations. The primary response of personnel and equipment for technical rescue incidents reside with the Tuxedo-Cheverly Fire/EMS Station. There are two satellite stations that include equipment and personnel response from Fort Washington and Berwyn Heights Fire/EMS Stations. The Departments Water Rescue and Recovery Team Stations 856 and 857 and the Laurel Volunteer Rescue Squad Station 849 are included in the TRS efforts for water and swift water incidents.

Prince George's County Fire Chief Eugene A. Jones will present a Department Unit Citation to the Technical Rescue Services Team in the near future. This is the highest award that can be bestowed upon a group within the Fire/EMS Department. Chief Jones also acknowledged Major Thomas for his years of dedicated service to the citizens and residents of Prince George's County and for his coordination of special services for the Department. Major Thomas is scheduled to retire after 20 years of service at the end of this month.
Posted by PGFD at 11:56 AM 1 comment: Links to this post