No Injuries at Woodmore House Fire Despite "Backdraft" 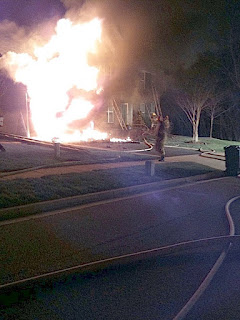 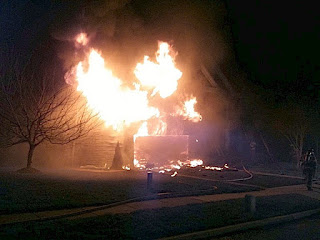 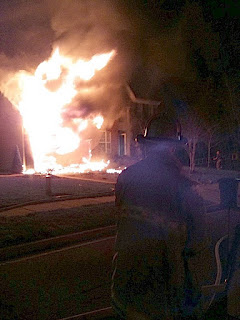 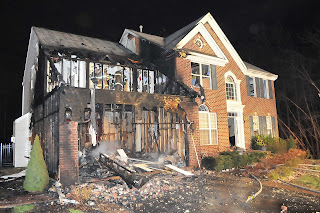 Front side of the house after the fire was extinguished. Photo by Mark E. Brady, PGFD PIO. 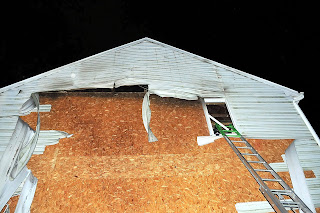 Vinyl siding was left to flap in the breeze after a "fire-ball" was seen blowing 10 feet out of the attic area. Photo by Mark E. Brady, PGFD PIO.

Firefighters battled a house fire and were fortunate to have escaped without any injuries after a “backdraft” occurred. At about 8:45 PM, Sunday, November 29, 2009, firefighter/Medics from the Glenn Dale and Landover areas were alerted to a house fire with a report of three occupants possibly trapped inside. Firefighters arrived at 2304 Prima Way and encountered a large 2-story, sprinklered, single-family home with fire showing from the garage. Firefighters initiated a simultaneous interior attack on the fire and searched for trapped occupants. The fire was quickly extending towards the second floor and attic area as firefighters continued their efforts to extinguish the fire. Search teams and ventilation crews opened windows to allow for better visibility and heat removal while the search for occupants continued. After operating on the scene for about 8 minutes an explosion occurred that the incident commander, Tony Kelleher, Volunteer Chief of the Kentland Fire/EMS Station, described as a “backdraft.”

A backdraft occurs when an oxygen-starved fire suddenly receives oxygen. The sudden rush of oxygen causes all of the super-heated gases to ignite at the same time, which causes an explosion. Firefighters standing at the front door of the house were blown 15-20 feet into the front yard, firefighters performing exterior ventilation reported their helmets being blown off, windows were blown out and Volunteer Chief Kelleher described a “fire-ball” that blew out of the attic area on the opposite side of where the fire had originated.

Not immediately knowing the status of all firefighters, Incident Command requested additional resources to the scene and ordered the evacuation of all personnel from the house. Paramedics tended to two firefighters that were blown into the front yard and a personnel accountability check was performed with all personnel being accounted for.

The fire was extinguished in about 30 minutes and all searches were negative. There were about 60 personnel that were dispatched to the fire.

A family of three normally resides at the house. An adult female and her young son were out of town and an adult male was not at home. The fire appears to have originated in the area of the garage with the cause being under investigation. A preliminary fire loss is estimated at $250,000. A backdraft often results in serious and fatal injuries, miraculously, no injuries were reported at this incident.

This house is located in the Country Club Estates sub-division of Woodmore. Relatively new homes that are fully sprinklered, by law, in all living areas. The garage and attic are not sprinklered and are the only areas of the home that sustained significant fire damage.
Statter911.com
The Secret List - Firefighter Close Calls

Posted by PGFD at 11:32 PM No comments: Links to this post