On Monday, June 29, The United States Park Police held their Annual Award, Promotion and Graduation Ceremony at their Headquarters in Washington, DC.

The following crew members from Medic 846, Largo/Kettering, and Ambulance 827, Morningside VFD, received a lifesaving award from U.S. Park Police Chief Robert D. MacLean for an incident on Suitland Parkway where one man was in cardiac arrest and was revived prior to arriving at the hospital. Award recipients included:

Congratulations are in order for these members.  Your actions and award reflects favorably upon yourselves and on the Prince George's County Fire/Emergency Medical Services Department as a whole. 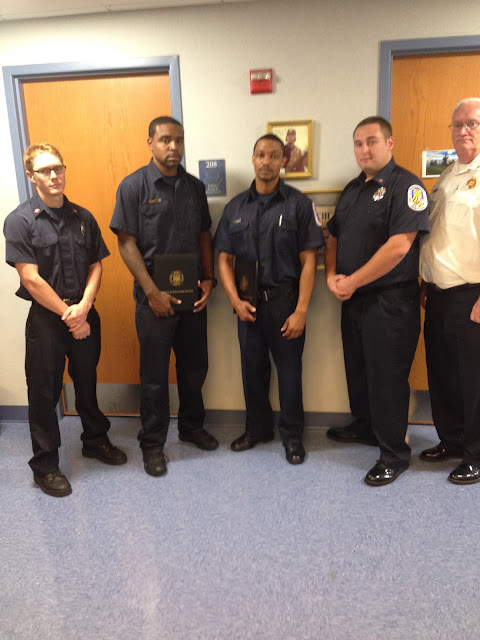 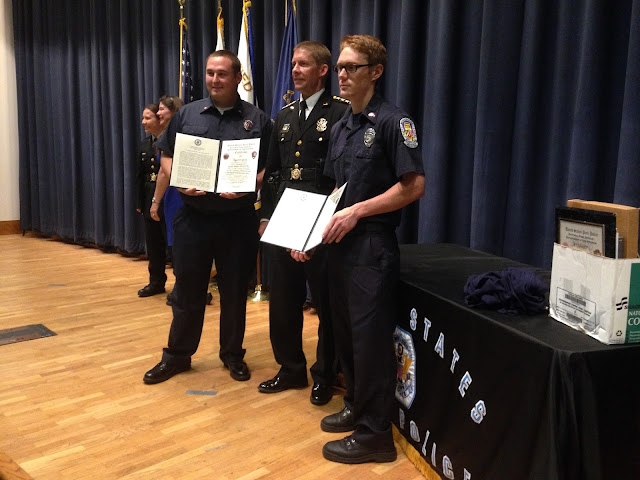 Posted by PGFD at 3:47 PM No comments: Links to this post

Today is July 1, 2015, the Safety First Day of the Month.  Having a working smoke and carbon monoxide (CO) alarm could be the difference in life or death - yours and your family.  Today is the day that the Prince George's County Fire/Emergency Medical Services (EMS) Department has designated for everyone to test their smoke and CO alarms.  It's simple:

Push the TEST button on the front cover of your smoke and CO alarm.

An audible beeping noise SHOULD sound.  If it does, congratulations, your done until next month.

If it does not sound an audible alarm - replace the battery.  Push the TEST button again - still no alarm - remove the alarm and immediately replace with a new 10-year, tamper proof, with hush feature smoke or CO alarm or better yet a 10-year combination smoke/CO alarm.

If your alarms are at about 10 years old or you don't remember if you ever replaced the alarm, do it today!!!  Smoke and CO alarms work all day - every day and will wear down over their 10 year service life.
County Law requires a working smoke alarm in your home.  Over the next two years the law will continue to evolve to require a working 10-year smoke alarm on every level of your home, primarily outside of sleeping areas.

County Law currently requires a working CO detector on every level of your home, primarily, outside of sleeping areas.  This law includes all homes with a gas service (natural, propane, oil, etc), a fireplace or an attached garage.  This law also requires that all hotels, motels, dormitories and all apartments and condos have working CO alarms.

Have you ever noticed that it is sometimes a challenge to reach your alarms installed on your ceiling or high on the wall.  Perhaps you use a step-ladder or stand tall on your toes to reach the test button.  Think about your senior citizen neighbors and relatives that may have difficulty even reaching a light switch.  Test their alarms for them every month, change their batteries at least once-a-year and contact 311 for them if they need a new 10-year smoke alarm installed by firefighters, free of charge.
Don't wait for a firefighter to knock on your door.  If you need a working smoke alarm and can not afford to purchase one, call 311 and ask about the free smoke alarm program.

The month of July is Summertime in Prince George's County.  A quick Safety First Day of the Month reminder of life-saving habits:

1.     Never leave children or pets in cars.  Heat stroke can occur within minutes and sickness or death will occur very quickly.

2.     During our hazy, hot and humid days - remember to drink plenty of water.  Its how our firefighters and medics stay hydrated and are able to work in hot temperatures.  HHH2 - "Hazy, Hot and Humid = Hydrate, Hydrate, Hydrate."

It is anticipated that many backyard barbecue's will be in use on the July 4th weekend and throughout the summer months. The PGFD recommend that you exercise caution and keep safety in mind when setting up, using and cleaning your BBQ grill.   Did you know that cooking, most notably "unattended cooking" is the number one cause of fires and fire related injuries in Prince George's County, this includes both inside and outside cooking: WATCH WHAT YOU HEAT!!!

•NEVER use a grill indoors including garages, overhangs and canopies

•By Law - Grills must be at least 30 feet away from any multi-family apartment dwelling.

•When using a grill at your single family home – homeowners should use a 10-foot perimeter from anything combustible – including your house!!! Never place a grill up against your house, wood deck or fence.

•Do not allow children and pets to play near a grill - set up a 10 foot safety zone around your grill.

•Keep a fire extinguisher, garden hose or bucket of sand nearby to douse a grill fire that gets out of control.

•Inspect your grill before you ignite to ensure everything is in working order. This inspection includes all connections on your gas grills are tight and not leaking.

Charcoal ashes and used briquettes should be disposed of in a metal container and allowed to cool down for up to 48 hours before disposal.  Keep ash container off of your wood deck and away from your house.

It is anticipated that thousands of residents will be taking full advantage of swimming pools.  Keeping safety first will help to prevent such a festive occasion from becoming a tragedy.  You should know that 75% of drownings occur in backyard pools.

•Always watch your children and never leave them unattended.  A lack of adult supervision is one of the leading contributing factors to children drowning.

•Do not rely on flotation devices to protect your children from drowning. You must supervise at all times.

•Have a phone nearby in the event you need to call 911.

•Have children swim in pairs - the "buddy system"

•If a child is missing - check the pool first.

•Teach your child how to swim. Visit www.pgparks.com/aquatics.htm for additional information.

For home pool owners and managers:

•Install a fence around the perimeter of the pool.

•Use self closing latches and gates.

•Install a door alarm from the house to the pool area.

As previously mentioned in swimming pool safety, everyone should take the time how to learn how to perform CPR and use an AED.  June 1 through June 7 is CPR and AED Awareness Week and is an excellent opportunity to learn both.  You can call 301-864-LIVE (5483) and find locations that teach CPR/AED or click here for additional information.
Posted by PGFD at 8:27 AM No comments: Links to this post