And, at the same time, a growing number of fires in abandoned houses and more 911 calls from people too poor to see doctors.

It's all adding up to a two-alarm crisis for the nation's fire services, according to the nation's biggest firefighter union and some prominent government groups.

After cutting money for parks, libraries, recreation and other so-called nonessential services, governments from the East Coast to the West increasingly are cutting public safety budgets -- money considered safe in ordinary times.

But these aren't ordinary times, says the National League of Cities.

In a January survey of member cities, 6 percent said they were making cuts in their public safety budgets, a number that undoubtedly has increased since then, says Chris Hoene, director of research for the league.

"Usually the public safety arena -- police, fire, emergency services -- are sacrosanct. They're options that are last resort when you're facing decisions about cuts," Hoene says. "The fact that you're seeing cities around the country making cuts to these services is evidence of the depth of the current recession."

Prince George's County, Maryland, a suburb of Washington, routinely closes four or five stations for a day, a practice known as brownouts, union leaders say. It also has reduced staffing on some fire apparatus to two people, a practice it acknowledges is unsafe and is trying to amend by redeploying people from the closed firehouses.

And in hard-hit Flint, Michigan, and Alameda, California, there are continuing recriminations over the role fire service budget cuts may have played in disasters. In one incident, an Alameda firefighter suffered burns, and in Flint, a 47-year-old man died after he was trapped in a burning home.

"It's a bad investment and you need to really look for other ways to make cuts, because what you're doing ... is you're cutting public safety, and it puts lives at risk," Zack says.

Daws, president of the union's local in Atlanta, adds, "It's penny-wise and pound-foolish to make these cuts to fire rescue. You more than pay for it in increased fire insurance premiums and that doesn't even calculate the additional loss of life from fire and medical emergencies."

But local governments, by and large, say cuts have not jeopardized safety.

"The leadership of the fire and EMS department does not feel the actions taken so far is jeopardizing public safety whatsoever," says Mark Brady, spokesman for the Prince George's County Fire/Emergency Medical Services Department in Maryland.

Hoene says public safety cuts are inevitable given that many cities spend upward of 50 percent of their budgets on police and fire services.

Some cities and counties are hurting worse then others, firefighters and officials say.

"The Upper Midwest has suffered, the Rust Belt, manufacturing, industrial bases have gone, and now with the economy even worse, they're having more trouble. Michigan is a great example and Indiana. And the Northeast; Massachusetts has been hit particularly hard," Zack says.

California, which is routinely beset by wildfires, is the best example, he says. The California Department of Forestry and Fire Protection, or CalFire, "is facing potentially hundreds and hundreds of cuts," Zack says.

But the state agency disputes that assertion, saying Gov. Arnold Schwarzenegger has made public safety a priority, and that it has no plans to reduce its about 7,000 firefighters, or the 4,400 inmate firefighters. The state does, however, plan to delay by one year $17 million for vehicle replacement, says spokesman Daniel Berlant.

The governor also has proposed a surcharge on home insurance premiums to raise $150 million for local governments to provide mutual aid, he says.

The California Emergency Management Agency, which coordinates the state's system of mutual aid, says it has heard anecdotal accounts that local budget problems will prevent fire departments from coming to the state's assistance during large-scale events, but has received no concrete evidence that will happen.

"To a large extent, people are still going to do that [help in emergencies], and they're going to worry about the money later," spokesman Jay Alan says. "It's just going to be more money worries later than it has been during the last couple of years."

Making the situation more dire, virtually everyone agrees, is that the number of abandoned homes and buildings is increasing. And firefighters can't assume that burning structures are vacant.

In some cases, budget shortfalls are causing fire departments to look for help.

In Prince George's County, the fire department has gone to volunteer firefighters to ask for additional help, establishing a calendar that looks further into the future, giving volunteers a clearer view of future needs.

It's also taking a closer look at how firehouses are distributed throughout the county.

But few say they believe that there will be any quick fix to the current problem.

Local governments are "not out of the woods," says Hoene of the National League of Cities, pointing out that "2009 will be tough" and that "2010 and 2011 will be equally or more tough."

"What happens in the economy takes 18 to 24 months to affect city revenues," he says.

Posted by PGFD at 6:38 PM No comments: Links to this post 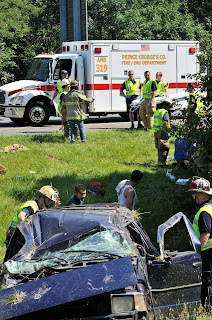 Prince George’s and Howard County Firefighters and Paramedics worked together to handle a single vehicle crash that resulted in eight injuries this afternoon. At about 3:15 PM, Monday, July 6, 2009, firefighters and paramedics from each jurisdiction dispatched a rescue assignment to the area of Interstate 95 North of the Brooklyn Bridge overpass and before the County line. Fire/EMS units from Laurel arrived first and encountered a Ford mini-van, for unknown reasons, that had left the roadway and travelled into a wooded area on the center median strip. The van impacted with trees causing the ejection of three of the occupants. The Ford mini-van then rolled over, ending up back on its wheels in a grassy drainage ditch of the median strip.

The Maryland State Police are investigating the crash. 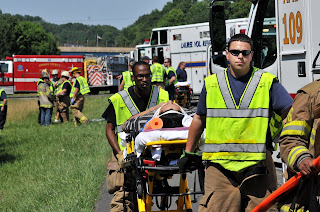 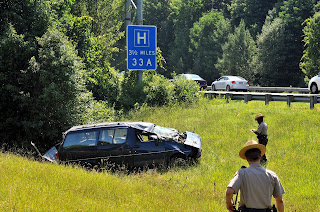 Posted by PGFD at 6:05 PM No comments: Links to this post

Email ThisBlogThis!Share to TwitterShare to FacebookShare to Pinterest
Labels: I95, laurel, pgfd 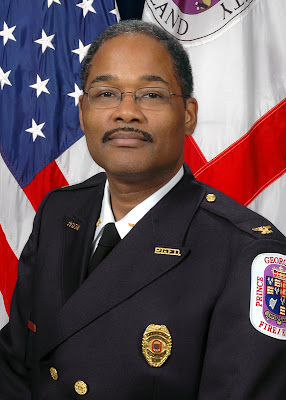 The Prince George’s County Council will consider the appointment of Acting Fire Chief Eugene A. Jones to be the Fire Chief for Prince George’s County, Maryland, on Tuesday, July 14, 2009, at 1:30 p.m. in 1st Floor Hearing Room of the County Administration Building. The hearing will be immediately followed by a swearing-in ceremony in the County Executive’s 5th floor Conference Room. Family, friends and colleagues of Chief Jones are invited.
Posted by PGFD at 1:12 PM No comments: Links to this post