An increase in the number of volunteer firefighter/EMT applications have escalated to levels not seen in decades and could not come at a better time. The Prince George’s County Fire/Emergency Medical Services (EMS) Department has taken measures recently to curb the amount of overtime paid to career firefighters and paramedics. Some of these measures include reducing the amount of personnel working on holidays, re-deploying career firefighters to cover other stations and relying on volunteer firefighters and EMTs to fill the gaps. Prince George’s County Fire Chief Eugene A. Jones has engaged volunteer leadership to assist in maintaining essential fire and emergency medical services while the Department stays within budgetary guidelines. He stated, “Volunteers have done a tremendous job in helping us provide fire and emergency medical services to our citizens and residents. They deserve a place within the management of this Department and I am proud to have their participation.”

A report released in July 2009 by the Corporation for National and Community Service finds that even during a time of prolonged economic recession, overall volunteering, not just firefighters, has remained steady, fueled by a compassion boom led by young adults and a wave of do-it-yourself volunteers working with their neighbors to fix problems.

Volunteering in America 2009, the most comprehensive data ever assembled on volunteer trends and demographics, found that a total of 61.8 million Americans volunteered through an organization in 2008, up one million from the previous year. America’s volunteers dedicated more than 8 billion hours of service in 2008, worth an estimated $162 billion.

With the increased demand for volunteer participation in providing services in Prince George’s County, citizens and residents have answered the call and are enlisting in record numbers, a trend the Obama Administration is working to encourage through its United We Serve initiative and www.Serve.gov website.

“In this time of economic distress, we need service and volunteering more than ever to build a new foundation for growth,” said First Lady Michelle Obama. “This report suggests that Americans are responding to the hardship around them by reaching out in service to others, giving their time when they cannot give their money. It reminds us of the generosity of the American spirit, and challenges us to work harder to make service part of the daily life of every American.”

The Prince George’s County Fire/Emergency Medical Services (EMS) Department is one of the largest and busiest combination, volunteer, career and civilian, Fire/EMS departments not only in the United States, around the world. Unified in 1970 under a charter form of government the Fire/EMS Department currently employs a career and civilian staff of nearly 700 and a volunteer force of about 1,100 members; of which about half participate in emergency operations. The Department responds to about 130,000 calls for service per year, of which, EMS calls account for about 80% of the workload.

The soon-to-be President of the Prince George’s County Volunteer Fire and Rescue Association (PGCVFRA), Bill Smith, credits Fire Chief Jones for his vision and efforts to put volunteer recruitment as a top priority in his administration. He also wants to acknowledge the "citizen volunteers" who have applied and hope they have great success in our system. Bill Smith stated, “Our goal for the near future is to target and recruit volunteers in the communities that will have the greatest impact within their own community. An additional goal as incoming President is the recruitment and retention of 600 new recruits with emphasis on EMS in 2009-2010.”
Volunteer applicants must successfully pass a criminal background check and physical to be considered for active fire fighting and providing emergency medical services. After completing the prerequisites, and before being able to participate in some level of operations, a volunteer member must complete a 24–hour classroom recruit school in addition to an 8-hour in-house hands-on training. Within the next 18 months volunteers must complete an advanced fire fighting basic training class and Emergency Medical Technician (EMT) training.

During the month of August 2009, 97 applications for volunteer membership were processed and submitted for background investigations. Eighty-five applicants successfully completed this process and were approved to take a physical. According to Nancy L. Roberts, Administrative Aide for the Fire Commission, previous numbers of applicants processed were about 30 to 40 per month.

According to Vince Harrison, Vice-Chairman of the Fire Commission, the September numbers will be as high if not higher then August. He credits streamlining the application process as one reason for the higher numbers. Previously, there was an elongated process which resulted in the volunteer applicant losing interest. Now, some ambitious volunteer recruits are completing the process within 30 days. Additionally, training is more readily available and based on a volunteer’s schedule considering they may have another job or attending school. Harrison also pointed out that Volunteer Recruit School instructors now come from within the volunteer ranks. He stated, “County Executive Jack Johnson deserves credit for selecting Eugene Jones as the Fire Chief. Chief Jones has opened up all lines of communications and made services within the Department available to everyone – career and volunteer.”

Anyone interested in becoming a volunteer firefighter and Emergency Medical Technician should stop by their local Fire/EMS Station or call 301-583-1914 for additional information.
Posted by PGFD at 3:45 PM No comments: Links to this post 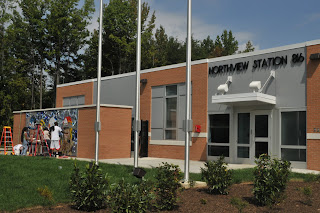 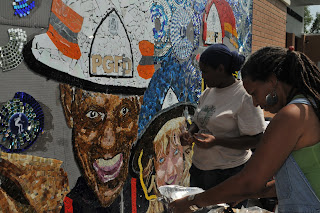 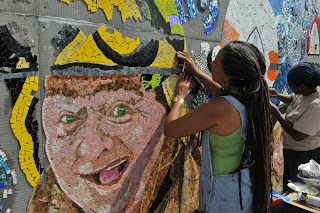 As the completion date for Prince George’s County newest Fire/EMS Station nears, a true work of art is in progress. Over the coming days, finishing touches are being applied to the mosaic tile mural being installed on a front wall of the Northview Community Fire/EMS Station. Cheryl Foster and her team of artists will complete work this week on this colorful and eye-catching display depicting firefighters, EMT’s and Paramedics. This work is part of the Prince George’s County Arts in Public Places whose Executive Director, Lauren Dugas Glover, has worked with other displays of art at the Bunker Hill and District Heights Fire/EMS Stations.
The Northview Fire/EMS Station #816 is slated to open for operations in mid October. The station will have an engine, paramedic ambulance, Battalion Chief, and EMS Supervisor. Additional Fire/EMS resources are also under consideration to be housed at the new facility.
The new Fire/EMS facility is located at Northview Drive and Health Center Drive.
Posted by PGFD at 2:54 PM No comments: Links to this post