The large number of applicants resulted in moving the testing site to a larger facility and having the written test divided into 4 sessions. Nearly 750 applicants will be tested each session. It is anticipated that lines of applicants will start forming as early as 7:00 am for the 9:00 am test and the afternoon session will have applicants lined up as early as 1:00 pm for the 3:00 pm test.

Testing will take place at Martins Crosswinds, 7400 Greenway Center Drive in Greenbelt, MD on Tuesday and Wednesday, August 10 and 11, 2010. The registration process starts at 7:00 am for the 9:00 am session and 1:00 pm registration for the 3:00 pm session each day.

We are looking forward to hiring 94 Firefighters from the eligibility list created from the completed hiring process. Additional hiring processes will include a physical agility test, interviews and a thorough background investigation. The Fire/EMS Department will finalize the hiring process tentatively in late 2010 and commence with the 21 week Fire/EMS Training Academy in January 2011.

Twenty-four of the firefighters hired through this process will be funded through a SAFER Grant awarded to the Fire/EMS Department from the Office of Homeland Security.  On July 14, 2010, Congressman Steny Hoyer (MD-5), Congresswoman Donna F. Edwards (MD-4) and Senators Barbara Mikulski and Ben Cardin announced that the Prince George’s County Fire/EMS Department will receive a $3,458,682 grant through the Department of Homeland Security’s (DHS) Staffing for Adequate Fire and Emergency Response program (SAFER).
Posted by PGFD at 3:38 PM No comments: Links to this post

Three significant motor vehicle crashes have occurred this Monday, August 9, 2010. The first incident occurred at about 8:45 am when a car, for whatever reason, left a parking lot, accelerated over the sidewalk and through the front glass window of a 1-story commercial building in the 10700 block of Rhode Island Avenue in Beltsville. Two occupants of the vehicle, 40ish/female and a 60ish/female, initially refused any treatment by paramedics, however, were eventually transported to an area hospital for a check-up. A building inspector was en route to check on the integrity of the structure. There was no need for the services of our Technical Rescue Team to provide structural support as the damage appeared to be mostly glass and cosmetic. The Prince George’s County Police Department is investigating. 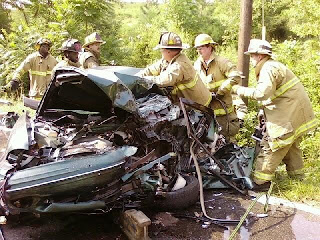 At about 9:45 am, Firefighter/Medics from the Ritchie area responded to a 3-vehilce motor vehicle crash in the 2000 block of Ritchie-Marlboro Road. One person was severely trapped in his vehicle. Firefighters worked for about 30 minutes with heavy duty hydraulic equipment to cut the vehicle away from the trapped occupant. Once the lengthy extrication was complete, an adult male, 30ish years of age, was transported by paramedics to a Trauma Center suffering life threatening multi-system trauma. The operators of the other two vehicles involved were not injured. The Prince George’s County Police Department, including their Accident Reconstruction Team, is investigating this incident. 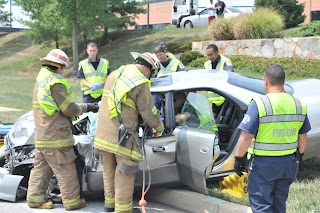 At about 12:30 pm, a 2-vehicle crash occurred leaving an adult female trapped in her car. Firefighter/Medics from the Beltsville and Laurel Fire/EMS Stations responded to Route 1 at Muirkirk Meadows and extricated the 20ish-year-old female and transported her to a trauma center. Her injuries are not considered life threatening. The teen-aged male was transported to a local hospital with minor injuries. The Maryland State Police-College Park is investigating the crash.

Posted by PGFD at 11:10 AM No comments: Links to this post