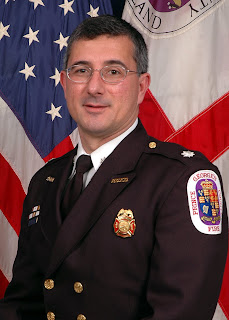 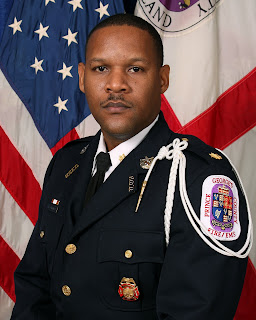 Major Rudolph “Rudy” Thomas was selected as the Manger of the Month of October 2009 for his work as the Special Events Commander. 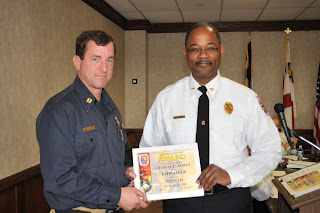 Fire Captain Thomas “TJ” James was designated as the Employee of the Month for his role in the opening of the Northview Fire/EMS Station #816. 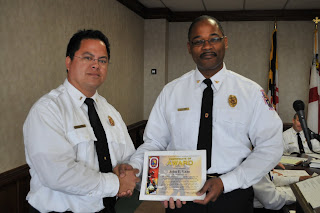 Fire Lieutenant John Lazo recognized for his due diligence and professionalism during recent changes within the Fire/EMS Department. 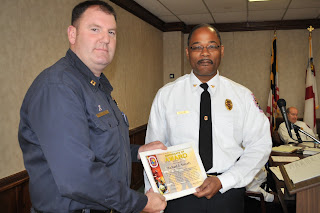 Fire Captain Michael Stavely was recognized for his due diligence and professionalism during recent changes within the Fire/EMS Department. 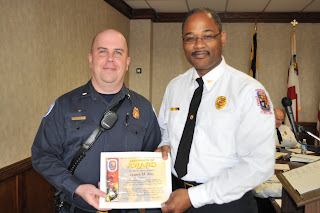 Fire Fighter/Medic Lieutenant James Key was recognized for his role at a hazardous materials incident at TASCO Water Works in Capitol Heights.

Prince George’s County Fire Chief Eugene A. Jones presented Letters of Commendation and Awards to several members at the Department’s Staff Meeting. The meeting was held at the Largo Government Center Department Headquarters on Tuesday, November 17, 2009.

Lieutenant Colonel Victor Stagnaro, Emergency Operations Commander, was presented with a Distinguished Service Award by Fire Chief Jones. This prestigious and rarely awarded recognition was accompanied by a commendation letter from Chief Jones that reads:

The Prince George’s County Fire/Emergency Medical Services (EMS) Department has faced many challenges in 2009. From fiscal challenges to large scale emergencies, the Emergency Operations Command has responded to all of them due in large part to your growth as a leader. As the award suggests, you have distinguished yourself as a leader. You have implemented a new patient care reporting system, a billing system, commanded one of the largest rescues in the history of the Department and operated with a reduced complement and budget.
Your actions and efforts as the Emergency Operations Commander have been remarkable. I have seen your growth as a leader and that growth has enabled your command to maintain and, in some areas of the County, enhance the quality of service that the Fire/EMS Department delivers to the public. This Distinguished Service Award is presented in recognition of the meritorious actions you have taken to keep the Emergency Operations Command operating at peak efficiency despite the resource challenges you and your command have faced.

I appreciate all the hard work and dedication you have exhibited. You are growing into the leader I always believed you had the capacity for. Thank you for your distinguished service.

Major Rudolph “Rudy” Thomas was selected as the Manger of the Month of October 2009 for his work as the Special Events Commander. Chief Jones commented, “Major Thomas’ continued display of dedication to service, professionalism and an espirt de corps in ensuring the safety and security for 90,000 Redskins fans have earned him the designation as the Manger of the Month.
Fire Captain Thomas “TJ” James was designated as the Employee of the Month for his role in the opening of the Northview Fire/EMS Station #816. Fire Chief Jones commented, “Through Captain James’ leadership and dedication, Station 816 was prepared for service and through his example the station enjoys some of the highest level of moral. Because of his tireless effort and leadership it is my pleasure to designate Captain James as the Employee of the Month for October 2009.”

The following individuals were presented with commendation awards for their diligence and professionalism during recent changes in the Department:

In making the presentations Fire Chief Jones stated, “The professionalism you display and the leadership you provide have been instrumental in ensuring the best service is delivered with the allotted resources. Over the past several months the Department has undergone unprecedented changes. These changes have directly affected many areas of the Department, and some have directly affected your area of responsibility. The ways in which you managed these changes and led personnel through it are exemplary and worthy of recognition.”

Three members of the Hazardous Material Team were recognized for their handling of an incident at TASCO Water Works in Capitol Heights that occurred on September 13, 2009. The recognition and commendation awards came about from a letter from Thomas Shriner, President of TASCO Water Works where he compliments service by Craig W. Black, Haz-Mat Team Coordinator; Phil Baker, Haz-Mat Team Leader; and James Key, Lieutenant from Haz-Mat Company #830. In his letter Mr. Shriner wrote, “The level of professionalism and compassion shown by your staff was unbelievable. I cannot express enough the appreciation we have for them.”

In making the presentation, Fire Chief Jones sated, “This award is in recognition of your handling of a hazardous materials incident on September 13, 2009, at TASCO Water Works in Capitol Heights, Maryland. Without your rapid intervention, the outcome could have been very different. Your actions speak highly of yourself, the Haz Mat Team and the entire Fire/EMS Department.” Fire Chief Jones also acknowledged the many dedicated years of hazardous Materials Team service provided to the citizens and residents of Prince George’s County by Phil Baker with 23 years and Craig Black with 22 years of service.
Posted by PGFD at 11:15 AM No comments: Links to this post