MEDIA CONTACT: Mark E. Brady, Chief Spokesperson, 240-508-7930, mebrady@co.pg.md.us
MEDIA NOTE: ICE RESCUE CLASSES WILL CONTINUE OVER THIS WEEK AND NEXT WEEK.  CONTACT ME IF YOU WANT TO ATTEND AND OBSERVE.
Weather conditions were perfect for Prince George’s County Firefighter/Medics participating in an Ice Rescue Class. Temperatures near freezing with periods of light snow provided the setting for the hands-on portion of the class. The Fire/EMS Departments Technical Services Battalion provided the class today, Monday, January 11, 2011, to career and volunteer members, with the classroom portion being conducted at the Berwyn Heights Fire/EMS Department and the actual ice drill being held at nearby Lake Artemisia. The class meets the requirements of the National Fire Protection Association (NFPA) 1670 – Standards on Operations and Training for Technical Search and Rescue Incidents.


About 2 dozen personnel participated in today’s class. Ice Rescue Classes will be held throughout this week and next at various locations throughout the County.

Firefighter/Medics are training for the possibility that some of citizens and residents may fall prey to the dangers of thin ice. December and January have provided a period of freezing temperatures and many local ponds and other bodies of water have become ice covered. While the scene may be enticing, the ice on many of these waterways is not thick enough to support a person’s weight.

The Prince George’s County Fire/EMS Department warns all citizens and residents that any body of water covered by ice should be considered extremely hazardous and should not be approached. For ice skating and other ice related activities the Fire/EMS Department recommends visiting one of your area ice skating facilities located throughout the County. Remember, Safety First – ensure Everyone Goes Home. 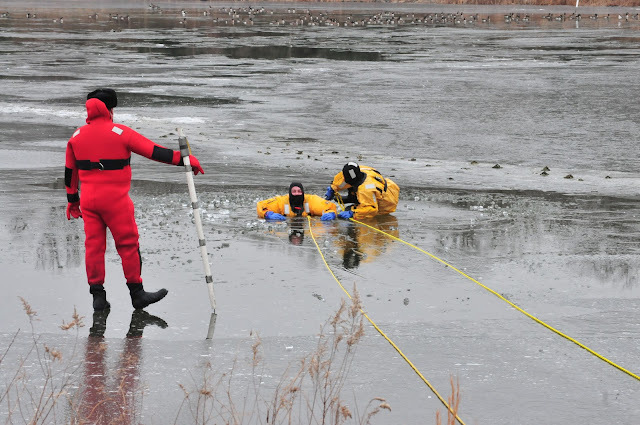 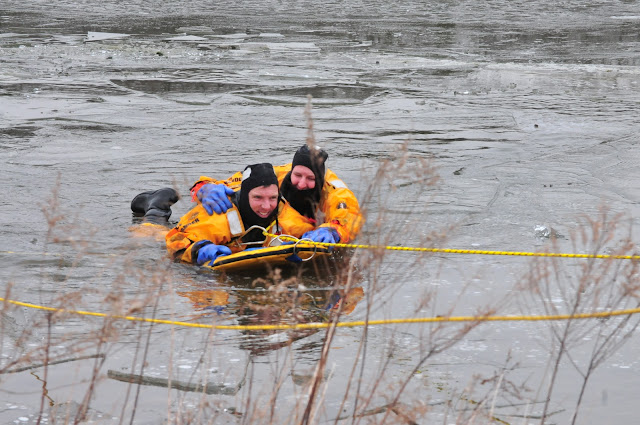 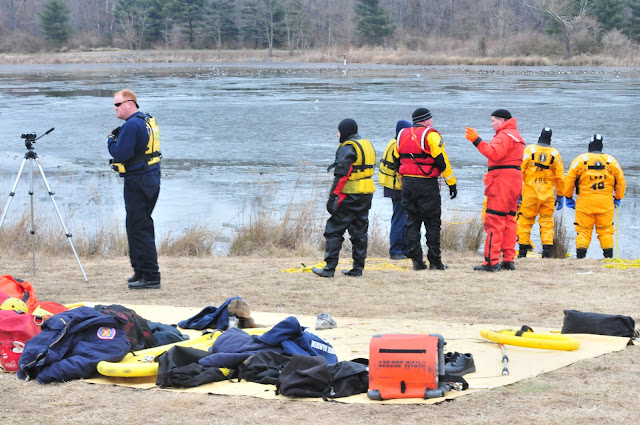 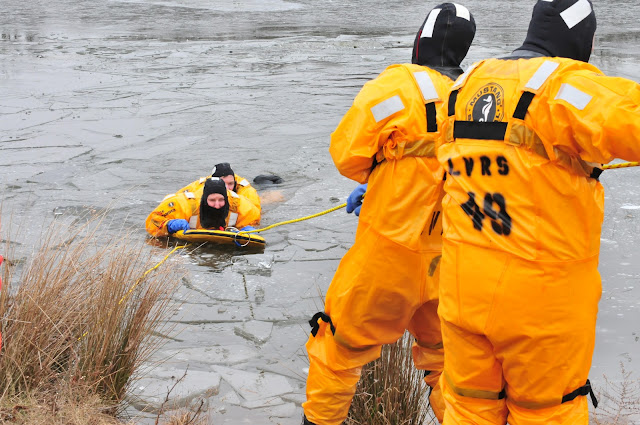 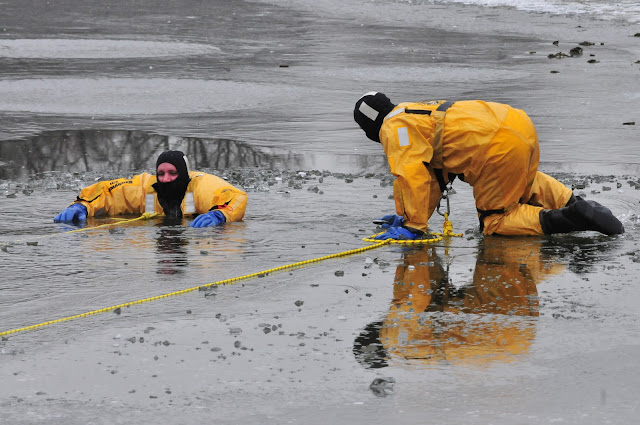 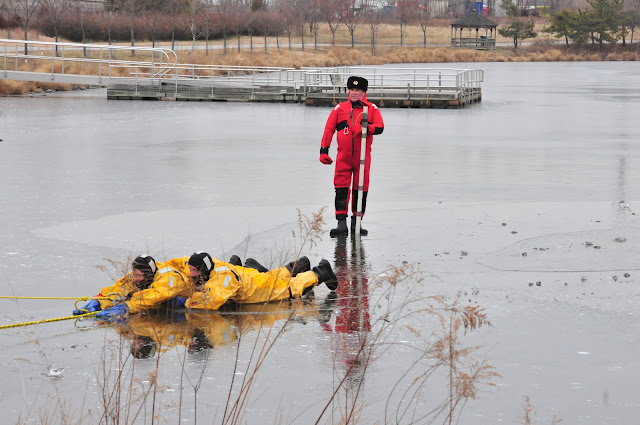 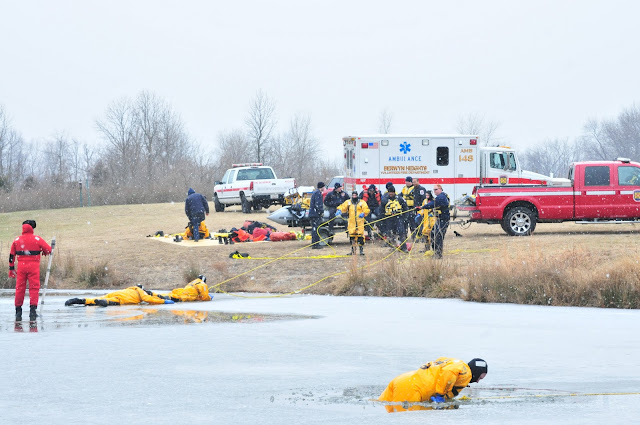 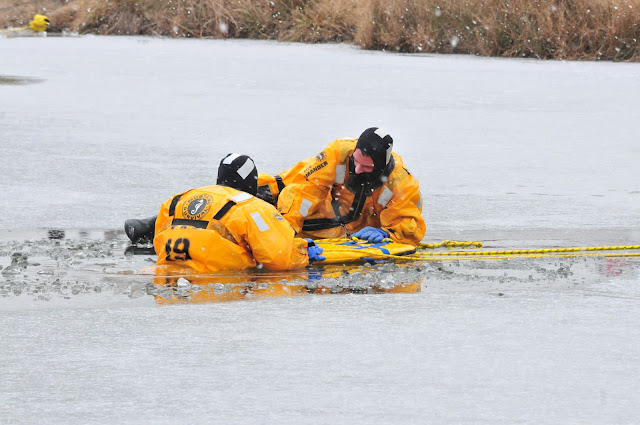 Posted by PGFD at 4:02 PM No comments: Links to this post

Grateful Mom Thanks Firefighter/Medics for Christmas Eve Rescue of Daughter

A grateful mother expressed her thanks in an E-mail and letter to Major Steve Hess and member of the Prince Georges County Fire/Emergency Medical Services Department for their assistance on Christmas Eve, 2010.


It was just after 5:00 pm, December 24, 2010, when firefighters, paramedics and the Department's Technical Rescue Team responded for an injured teen-aged female that had fallen down a steep incline into a dry creek bed ravine.

Fire/EMS units responded to the 8100 block of Overfield Court in Bowie, A female had fallen into a 30-foot ravine while attempting to find a lost cell phone. The incident was located about 300 yards from the street. She was with her mother who summoned help after being unable to rescue her daughter.

The Fire/EMS Department high-angle teams worked quickly to reach the girl and at around 6:30 were lifting her out of the ravine using a rope and pulley system.

The patient, under the care of paramedics since their arrival, was treated for hypothermia and possible injuries to her back. She was transported via MSP Trooper 2 meda-vac to a nearby trauma center for treatment of her injuries.

Major Steve Hess was on the scene and worked closely with the family to keep them informed of everything that was occurring during the rescue. He drove the teen’s mother to the trauma center and remained with her until hospital staff had the opportunity to speak with her.

Shortly after the incident a thank you letter was received from the mother:

I just sent you a Thank You card in the mail but also wanted to send this e-mail so perhaps you could share it with the other emergency folks that responded on Christmas Eve to my daughter's fall into that ravine. My family and I can't thank you all enough. It is a horrible feeling as a mom when you suddenly realize that no matter what you do to help your child it is not enough and you need to call for help. I will never forget the sound of her back hitting that rock. I can't get that noise out of my mind nor the scream that happened after. My daughter is very athletic and is a pretty tough kid so when she screamed like she did and started to hear ringing in her ears and seeing red I knew she was not kidding around. Everyone that came to help was fantastic and completely impressive. I felt horrible that folks gave up their Christmas Eve to come help us. We are so thankful for your help and amazed that she did not break anything. She is still not getting around as well as she would like to and has to sit on the sidelines during her games but she is healing and it will take time the doctor said for the swelling to go down. I want to especially thank you for taking me to the hospital and waiting with me. It was nice to have someone there to point me in the correct direction in all of the confusion.

Please extend our gratitude to all the men and women that responded that night. We are sorry we took you away from your family and friends on Christmas Eve but so very thankful for your service!

Acting Fire Chief Marc Bashoor also commends the personnel that worked during the Christmas Eve incident. Bashoor stated, “Obviously, the successful actions of the men and women of our Department have had a positive impact on a family’s life and I congratulate each and every member for their professional efforts and personal sacrifices they made that evening to be there. I also acknowledge and commend Major Steve Hess for going above and beyond the call of duty in facilitating the needs of the victim’s family during this very stressful night. ”
Posted by PGFD at 9:56 AM No comments: Links to this post