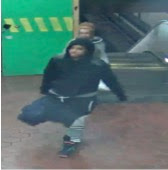 The Prince George’s County Office of the Fire Marshal is working to identify the suspects shown in the above surveillance photographs.

Anyone with information is urged to contact the
Fire Investigations Division.

You can call 24 hours a day and remain anonymous.

Posted by PGFD at 6:37 PM No comments: Links to this post

Prince George’s County Fire Fighter/Medic Captain Donny Fletcher knows the feeling of falling through a burnt out section of a house and holding on for your life waiting for someone to rescue you.  Fletcher fell through a burnt out stairwell in July of 2015 and required rescue by another firefighter. Today, he heard the Incident Commander transmit a firefighter had fallen through the roof of a burning house and he knew he had to help.

Around 1:00 pm, January 5, Public Safety Communications received at least two 911 calls stating a house was on fire in the 9300 block of Old Marlboro Pike in Upper Marlboro.  Firefighters arrived to find smoke coming from a 1-story single family home and initiated a search for an unaccounted occupant.  Firefighters stretched hose lines into the house and started to knock the fire down.  All searches for occupants were negative and firefighters continued with the firefight.  The fire extended up into a large attic area as firefighters from Truck 837, Ritchie Fire Station, started to open up the roof to relieve the interior of high heat and thick smoke conditions.

Incident Commanders, Battalion Chief 3 Denny Chatel and Executive Officer Assistant Fire Chief Alan Doubleday, observed two firefighters operating on roof just as one of those firefighters fell through a weakened portion into the attic.  The firefighter fell through up to his shoulders and was enveloped in a sudden rush of high heat and thick smoke coming up from the attic.

Having observed the fall Battalion Chief 3 transmitted that a firefighter needed assistance and activated the Rapid Intervention Team (RIT) to assist.  The other firefighter from Ritchie, Volunteer Assistant Chief William Cunningham Jr., immediately went to aid his fellow crew-member and was able to support him from falling further into the attic but required help in lifting him out of hole.

Additional assistance arrived with Captain Fletcher and Lieutenant Chris Blackistone and Fire Fighter William Philpott from the RIT team.  Members of the RIT were from the Upper Marlboro Fire/EMS Station 820.  The four firefighters lifted the firefighter up and out of attic and back onto the roof where other firefighters assisted him down a ladder to awaiting medics.

Firefighters were careful not to overload an already comprised roof as some stood by near the roofline and ladders to assist the injured firefighter down to ground level.

Firefighters extinguished the remaining fire within 30 minutes of arrival.  One dog was found inside the burning house with firefighters attempting resuscitative measures before pronouncing the dog deceased.

The cause of the fire remains under investigation.  There were no injuries reported.


http://pgfdpio.blogspot.com/2015/10/laurel-volunteer-chief-awarded-for.html
Posted by PGFD at 5:33 PM No comments: Links to this post