Media Contact: Mark E. Brady, Chief Spokesperson, 240-508-7930
Twenty-eight career and volunteer members of the Prince George’s County Fire/Emergency Medical Services Department were presented with the Departments highest award – a Unit Citation. The presentation was made by Fire Chief Marc S. Bashoor who presented individual certificates, letters and Distinguished Service Ribbons to the individuals involved. Unit Citation Plaques were also presented to each unit that will be displayed in the station or office of the unit. The award presentation was held at the Beltsville Fire/EMS Station on Tuesday evening, October 11, 2011. Assisting Fire Chief Bashoor in the award presentation was Lieutenant Colonel Jerome LaMoria who is retiring after 27 years of dedicated service to the citizens of Prince George’s County. This award ceremony is LaMoria’s last official act as his final day in office is Wednesday, October 12.


A Unit Citation is awarded to an entire crew assigned to a station, unit or incident that warrant honor as a group for valorous or meritorious action. Upon approval of the Fire Chief, any crew or unit so designated will be presented a plaque, suitably inscribed, to be displayed at the station or office of the unit. Each individual of the honored unit will receive a Certificate of Merit, Unit Citation, and Distinguished Service Ribbon.

In making the presentation, Fire Chief Marc S. Bashoor stated, “Although there were numerous and challenging obstacles, everyone worked cohesively to ensure rapid pre-hospital treatment and transport to trauma centers via ground and air. This incident tested the physical, mental, and emotional resolve of even the most experienced first responder. However, the professionalism and unrelenting commitment you displayed, as you worked alongside your fellow crew members, is commendable and worthy of recognition.”

The following listed individuals were recognized as a group with the Unit Citation.
All photos by Teresa Ann Crisman. 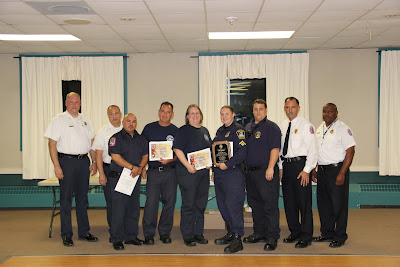 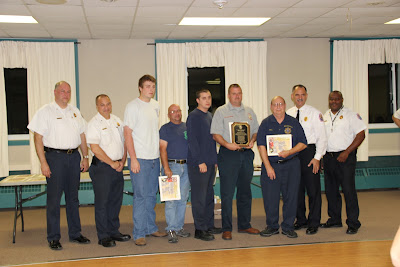 Citizen Services Unit Billy McNeel
Posted by PGFD at 9:41 PM No comments: Links to this post

MEDIA CONTACT: Mark E. Brady, Chief Spokesperson, 240-508-7930
The fun and excitement surrounding Halloween can suddenly turn to sorrow and misfortune through one careless act. The incidence of fire, accident, and injury often increases during holidays and festive events. Each year, firefighters and paramedics witness incidents on Halloween that could have been prevented had simple safety rules been followed. Among the high-risk activities on Halloween; trick-or-treating is one of greatest concerns to Fire/EMS Department personnel. Between 4:00 PM and 10:00 PM on Halloween, there is a significant increase in falls, burn-related injuries, and pedestrian injuries. Children are four and a half times more likely to be hit by a car on Halloween than on any other night during the year. Falls are the leading cause of unintentional injuries on Halloween. Additionally, many parties and festivities are planned over the Halloween weekend which could result in an increase in alcohol consumption with inherent dangers.


Often, there are safe alternatives to trick-or-treating that can be fun and also risk-free. Local churches and schools may plan Halloween parties, or families may get together and conduct games and activities instead of allowing young children to engage in trick-or-treating in neighborhoods or along busy streets. Prince George’s County Fire Chief Marc S. Bashoor urges adults to take a more pro-active role in activities on Halloween. Additionally, he reminds adults to be vigilant and exercise due caution when traveling to avoid automobile related crashes. Bashoor stated, “Remember Safety First ensures everyone goes home.”

For those who plan to venture out trick-or-treating, the Prince George’s County Fire/Emergency Medical Services Department would like to offer the following safety tips so that all might enjoy a happy and safe Halloween:

• Costumes should be made of flame resistant light-colored fabric or have reflective qualities. They should be short enough so as not to interfere with walking or become entangled in bicycle chains. Use facial makeup rather than masks so children can see easily.

• Children should carry flashlights and not use candles or torches. Before leaving the home, children should discuss the proposed route, time of return, and companions. An adult should always accompany younger children. It is advisable to visit the homes of persons you know or local familiar neighborhoods, stopping at well-lit houses only. As a general rule, children should avoid entering homes or apartments and always travel with a companion.

• Children should avoid busy streets, always use sidewalks, and follow all traffic rules and regulations. Motorists should avoid all unnecessary travel on Halloween evening, and when driving they should drive slowly and be alert to small children crossing streets. Many accidents occur when motorists are backing vehicles out of driveways, unaware of the presence of small children.

• Halloween treats should be saved until children return home where adults can examine all items closely. Treats that are unwrapped, or show signs of having been opened, should not be eaten. Fruit should be sliced into small pieces and checked for foreign objects. Keep small pieces of candy away from infants and very small children, as they can easily become lodged in the throat and cause choking.

• Persons receiving trick-or-treaters should keep a light on and pick up obstacles that could cause a child to trip and become injured. Jack-o-lanterns should be kept clear of doorsteps and landings. Consider the possibility of using flashlights instead of candles to light Jack-o-lanterns. Keep dogs and other pets away from doors so children will not become frightened.

A recent trend in celebrating Halloween has been to celebrate as groups at parties or community events in addition to more adult halloween parties being held. This trend has resulted in fewer door-to-door trick-or-treaters, however, creates additional vehicles on the street. With Halloween falling on Monday, October 31, 2011, there are numerous additional Halloween parties planned for both adults and children over the weekend of October 29 - 30. Traditionally, when festive occasions are celebrated amongst adults, the consumption of alcohol goes up. The Prince George’s County Fire/EMS Department offer these everyday reminders and safety tips to party-goers:

• Always wear your seat belt and ensure everyone in your vehicle is buckled up as well.

• If you are wearing a costume – vehicle occupants, including the driver, should not wear a mask or head dressing as this may block the view of the driver.

• Be aware that there are still many trick or treaters walking and crossing streets – slow your speed and use extreme care while driving.

• Use battery powered illumination instead of candles at your Halloween celebration, including inside of your carved pumpkin.
Posted by PGFD at 12:48 PM No comments: Links to this post

Posted by PGFD at 9:49 AM No comments: Links to this post