Two paramedics assigned to limited public contact since last Friday have received medical clearance to return to full duty. The actions of the paramedics were called into question after their initial assessment that a patient was presumed deceased was not accurate. The patient was transported to the hospital about 1-½ hours later by another EMS unit where he succumbed to his illness the next day.


The Emergency Medical Services Operational Program moved swiftly to initiate a clinical Quality Assurance Review of this incident. The Jurisdictional Medical Director, Dr. Terry Jodrie, interviewed both paramedics on Friday, just hours after the incident occurred. A Provider Action Notice was issued within 24 hours of the incident requiring all EMS personnel to review the Presumed Dead on Arrival (PDOA) protocols. This includes an update that most PDOA determinations must include a medical consult between the EMS care provider and a base station physician by EMS radio or telephone.

While the two paramedics have returned to full duty with clearance of the Medical Director, the Office of Professional Standards continues their review. This comprehensive process includes a review of applicable Departmental General Orders, Standard Operating Procedures and interviews of everyone involved. These reviews could take up to 2 months before being completed.

Friday's incident in Glenarden is extremely regrettable for everyone involved and the Fire/EMS Department is doing everything possible to avoid any reoccurrence.
Posted by PGFD at 7:01 PM No comments: Links to this post

Largo, MD…On Wednesday, March 31, 2010, Prince George’s County Fire Chief Eugene A. Jones presented four prestigious Departmental awards during a State of the Department Address. The event was held at the Fire/EMS Department Headquarters on Basil Court in Largo.  These awards, Fire Chief's Special Achievement Award and the Manager and Employee of the Year, are in recognition of the work and dedication demonstrated by these individuals during calendar year 2009.  The four awardees will also have their name added to plaques for each category.  These plaques adorn the walls in the Office of the Fire Chief. 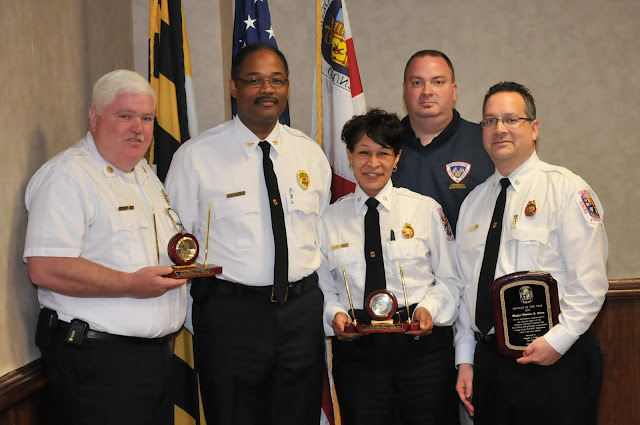 (pictured from L to R) Chief Spokesman Mark E. Brady, Fire Chief Eugene Jones, Lt. Col. Angela M. Peden, Administrative Assistant Spencer A. Stevenson and Acting Lt. Col. Steven L. Hess during the award presentation.
(Photo by: Fire Technician Steve Williams)
Fire Chief’s Special Achievement Award
Lieutenant Colonel Angela Peden
Lt. Colonel Peden’s leadership and management skills have transformed the way we do business in the Fire/EMS Department. Her professionalism and dedication were particularly helpful to the Fire Chief through this very difficult fiscal crisis. Chief Jones stated, "I am sure my being able to weather the fiscal storm was in large part due to her support of me as Fire Chief. I have not asked anyone to be supportive of me personally or loyal to me however, Lt. Colonel Peden has been supportive and loyal while remaining a true professional. I have the utmost respect for her and her work."
Chief Spokesman Mark Brady
In making this presentation Fire Chief Jones stated, "Very few individuals have the ability to transcend time and space to reach others. Spokesperson Mark Brady has a remarkable talent of communication and that is borne out by the response I get from the citizens of this County as they recount to me the impact he has on them. His impact has been felt nation wide as he is a leader and truly effective at what he does. As my Chief Spokesperson he has gotten my message out to the community in ways that I was truly impressed with as well as other community leaders. When we think of the truly successful people and their roles in this Department I believe Mark Brady should be named among them. Mr. Brady has not only gotten out the message he continues to add to the professional image of the Prince George’s County Fire/EMS Department."
Manager of the Year Award
Acting Lieutenant Colonel Steven L. Hess
While describing his selection for Manager of the Year, Fire Chief Jones described his reasons for his selection by saying, "For his developing, implementation and constant support of the Volunteer staffing Utilization plan. The efforts Lt. Col. Steve Hess have generated a considerable savings to the Fire/EMS Department when it was needed the most."
Employee of the Year Award
Spencer A. Stevenson
In what is sure to be remembered by every member of this Department, Fire Chief Jones explained his choice for Employee of the Year by explaining why the video of this particular incident may have gone undetected except for Spencer Stevenson.  Fire Chief Jones stated, "Mr. Stevenson showed us how one individual’s expertise can have an impact world-wide. While Mr. Stevenson goes about his daily work with pride and devotion he has a passion for the Department. In the midst of personnel struggling to deal with furloughs and budget cuts he focused his energy on his work. His awareness of the technology that he helps maintain assisted the Fire/EMS Department in chronicling the explosion of the Penn Mar Shopping. The information gathered through the video drive cam was so valuable words cannot express the impact the information gleaned from the video will have on how we respond to natural gas leaks. His actions and the subsequent information helped validate our efforts to improve the safety of our operations."
Posted by PGFD at 2:05 PM No comments: Links to this post