At about 3:15 pm today a slow moving CSX freight train struck a slow moving dump truck as it was attempting to cross an unguarded crossing in Bladensburg. The incident occurred in a heavy industrial area in the 3300 block of Kenilworth Avenue. The adult male dump truck driver is being transported by paramedics to a nearby hospital for evaluation of minor injuries. The Fire/EMS Department Haz Mat team was called to the scene to handle a 50 gallon fuel spill coming from the significantly damaged front end of the dump truck.
Mark E. Brady
Posted by PGFD at 3:48 PM No comments: Links to this post 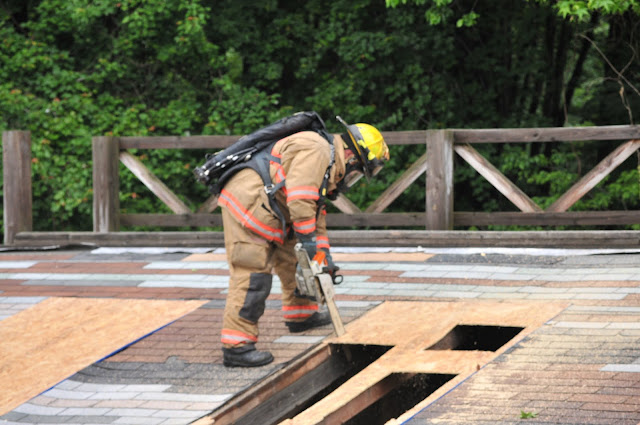 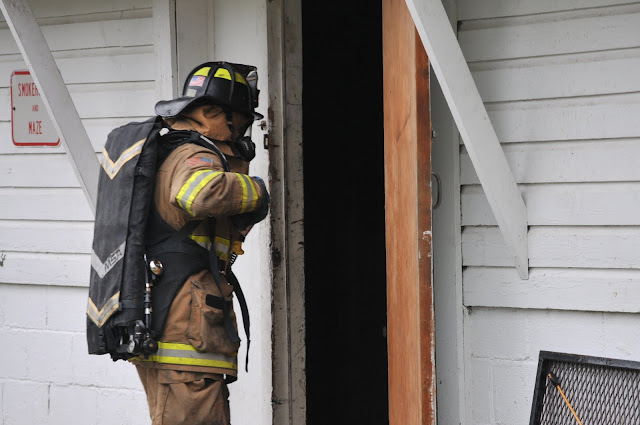 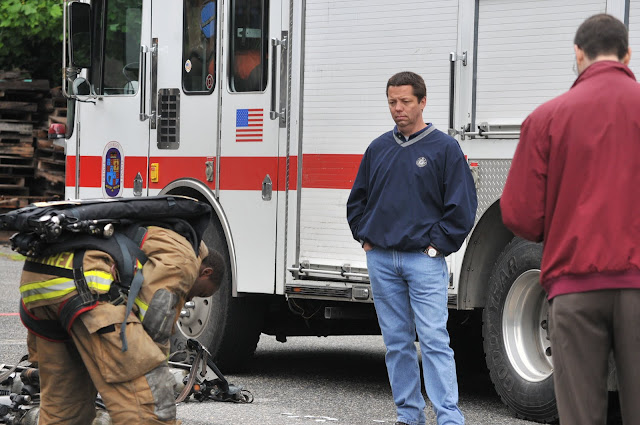 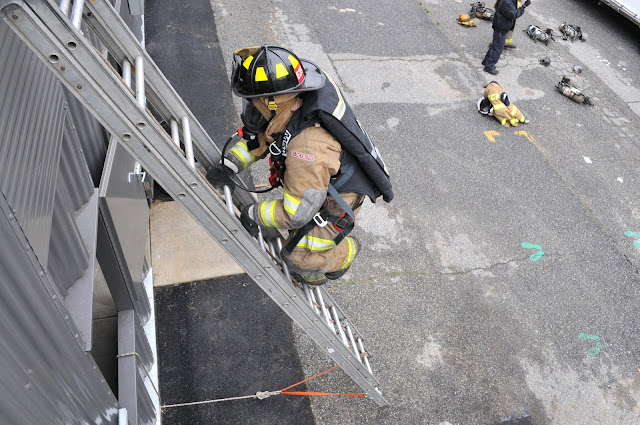 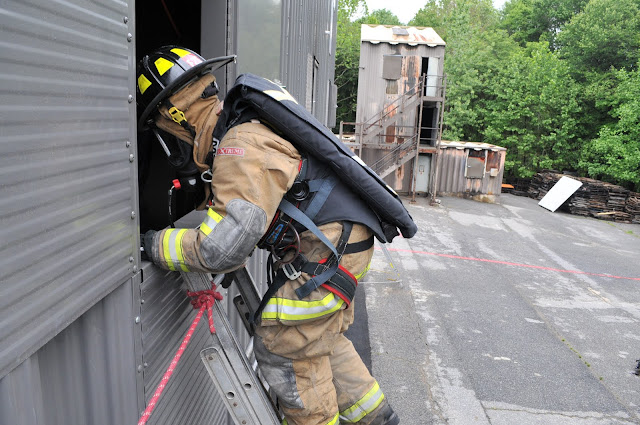 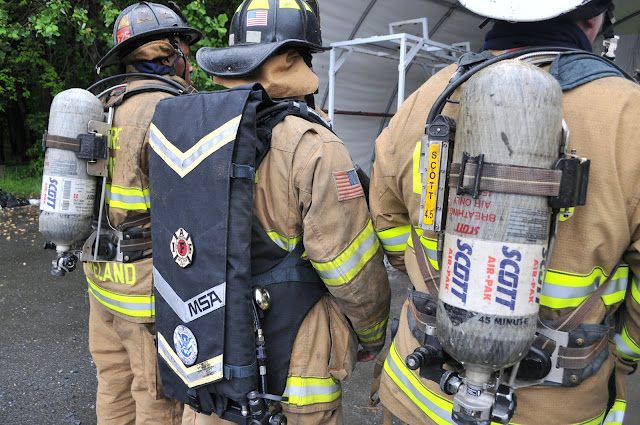 
“These important field tests give us the information we need to ensure that this cutting-edge technology is safe, reliable and ready to be deployed. This is one of the most significant health and safety projects the IAFF has ever undertaken, and this new SCBA technology will improve the safety of fire fighters on the frontlines,” IAFF General President Harold A. Schaitberger said.

Prince George’s County fire fighters participated in the field test, held on Tuesday, May 18, 2010, at the department’s training academy in Cheltneham, MD. They were joined by 12 fire fighters and four law enforcement officers from surrounding municipalities, including Washington, D.C., Fairfax County and Montgomery County, in rigorously testing the new SCBA.  Firefighters went through several evolutions with  traditional SCBA and then repeated the same evolution with the flat pack SCBA.  After each evolution firefighters completed an evaluation form describing the pros and cons of the SCBA.

The IAFF, under contracts with the U.S. Department of Homeland Security, designed the new SCBA, and global safety equipment manufacturer MSA, based in Pittsburgh, Pa., was selected to build a prototype of the new apparatus.

The IAFF’s next-generation SCBA prototype will rely on pressure-vessel technology, which promises to make fire fighting breathing apparatuses smaller, lighter and more efficient than SCBA currently in use. MSA was selected by the IAFF to build the prototype after an extensive solicitation process.

The IAFF received more than $2.7 million from the Department of Homeland Security’s Science and Technology Directorate (DHS) to fund research and development of a next-generation SCBA.

As part of its development efforts, the IAFF and DHS Science and Technology Directorate worked with Vulcore Industrial LLC under the DHS contract to create the new pressure-vessel technology to make SCBA lighter with a greatly reduced profile when compared to current SCBA cylinders. The IAFF then selected MSA to build the final prototype, which is expected to demonstrate the superiority of the new pressure-vessel technology that would replace the single-air cylinder design of conventional fire fighting breathing apparatus.

The new technology, referred to as a “flat pack,” uses a special high-temperature lining in place of conventional aluminum liners used in current SCBA cylinders. These linings are then braided with Kevlar and wound with pre-impregnated carbon fiber. The entire array is inside a soft, flexible cover, allowing the design to flex horizontally and vertically at the connection points.

This new SCBA technology will be available to fire departments once extensive testing is complete.

For additional information on the field test contact Bill Glanz of the IAFF at 202-824-1505. 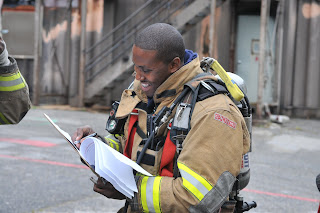 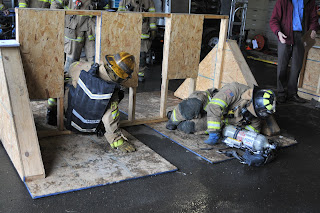 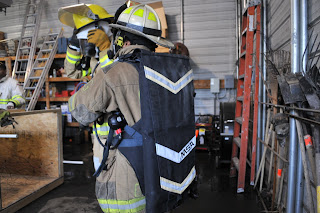 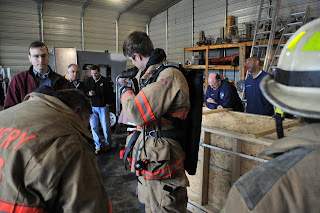 Posted by PGFD at 2:24 PM No comments: Links to this post 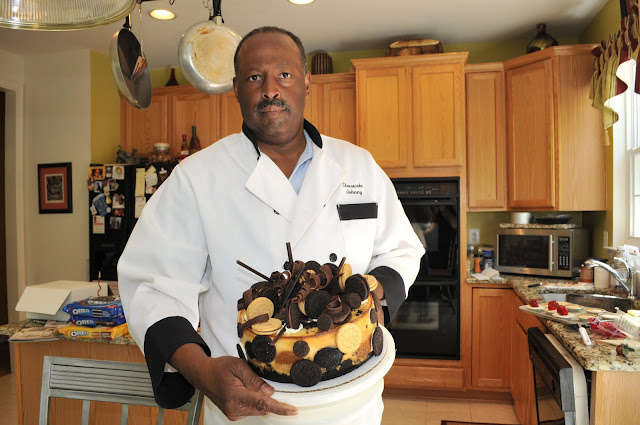 Cheesecake Johnny and his "Oreo-Style Cookies and Cream Cheesecake"
MEDIA CONTACT: Mark E. Brady, Chief Spokesperson, 240-508-7930
He is one of Prince George’s County’s Bravest and until recently his off-duty hobby was one of our best kept secrets. 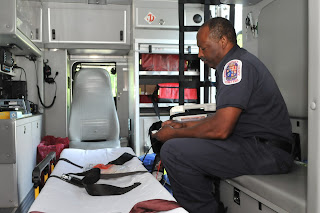 Fire Fighter/Medic John L. Scruggs is a 15-year veteran of the Prince George’s County Fire/Emergency Medical Services (EMS) Department, assigned to the Northview Community Fire/EMS Station #816. His professionalism, diligence and proficiency in executing his paramedic skills onboard Paramedic-Ambulance 816 has earned him an Emergency Services Award, which was presented during EMS Week 2010.

Fire Fighter/Medic Scruggs, who is on shift work, spends as many as 24 hours with the other five members at Station #816. Shift members share the responsibility for preparing meals by using a rotation method. As time and call volume permits, the entire crew comes together and sits down to eat as a family. It’s no secret that Scruggs’ shift partners look forward to the days he’s scheduled to cook. “I love cooking!” he says. “Any kind, any style and food…” 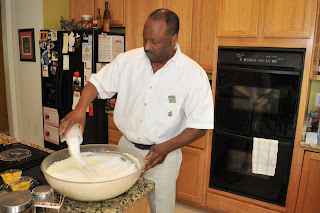 Fire Fighter/Medic Scruggs enjoys cooking in general but is most passionate about his indescribably scrumptious cheesecake creations, for which he’s known. His fondness for cooking dates back to his days at Catholic University, where he worked in the campus cafeteria preparing close to 600 meals daily. It was then he developed a love for baking cheesecakes. “I would travel to New York City, where I’d enjoy dinner out and desert at a local dairy bar. There, I found everything dairy—strawberry cream pies, cheesecakes and etc. You name it and they had it, all fresh and wonderful!”

Scruggs says, “For over 25 years I have been developing and improving recipes, in an attempt to turn out the perfect product.” His wife and colleagues have dubbed him “Cheesecake Johnny,” which captures both his passion and his easy going personality. His wife, Bridgette Ann Greer, an Associate County Attorney with the Prince George’s County Office of Law, currently oversees legal affairs within the Fire/EMS Department.

His zeal for baking cheesecakes was initially a hobby; however, it wasn’t long before it evolved into a part-time business. Testimonials spread rapidly about “Cheesecake Johnny’s” delectable and aesthetically pleasing product; and, he soon found himself consumed with taking orders, baking and delivering during his off-duty time. Although his specialty is cheesecakes, on rare occasions he bakes other cakes or pies and sometimes caters small events for family and friends. 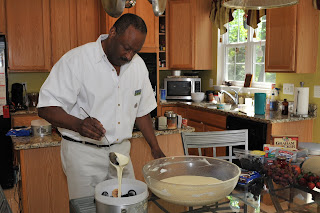 Scruggs’ menu includes New York, Baltimore, French and Old Style Cheesecakes in a variety of 32 flavors. To date, his most requested cheesecakes are Strawberry and Oreo- style Cookies and Cream. Asked about his personal favorites, he replied, “Strawberry, Banana and Sweet Potato are at the top of the list.” John Scruggs flavorful and decorated cheesecakes have become popular and are in high in demand, especially around the holidays. He bakes as many as 50 cheesecakes at Thanksgiving and Christmas, often having to turn down orders because he’s so busy. Ironically, it seems the demand for his delightful delicacies soared in the midst of him taking the two-week long course required by the Health Department to obtain permits as a Certified Food Handler.

“Cheesecake Johnny” keeps his recipes to himself, claiming them to be a proprietary secret. He reveals only that he uses the very best ingredients available. “The real secret,” he confided, “is in the baking and cooling process, as well as the presentation.”

The cheesecakes sell for about $40, and this author can personally attest that they’re worth every penny. He is a master chef at combining fresh products into a large bowl until there is a smooth consistency and then pouring the batter into spring form pan, intermittently pausing to add crumbled Oreo cookies or other fruity ingredients before continuing to top off the pan. He bakes at a prescribed temperature for a designated amount of time and then allows the baked creamy cheesecake to properly cool. His decorations may not occur until hours later before the cheesecake is ready for presentation. The final product almost looks too good to cut into, as cookies or large pieces of fruit adorn the top and sides. 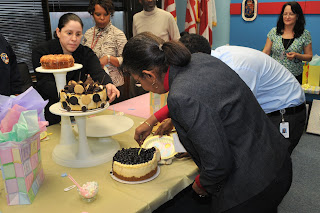 “Cheesecake Johnny” is the chef on his shift at while at the fire station; but, he is unable to bake cheesecake for his crewmembers. “I sometimes wish I could, but being assigned to a busy EMS unit makes it impossible to produce the best cakes. Timing is critical. If I’m on a call and can’t check or remove the cake when it's done, it’s no good,” he says. His wife, Bridgette, on the other hand, is co-chairperson of the Fire Chief’s Sunshine Committee, designed to ensure everyone’s special day is recognized with a brief celebration. Recent Headquarters celebrations have had the pleasure of enjoying cheesecakes, rather than the usual cupcakes. As you probably have guessed, there’s been a dramatic increase in attendance. 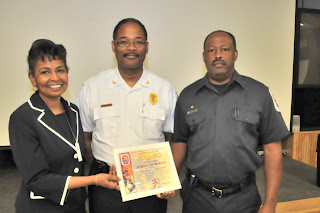 Fire Fighter/Medic John “Cheesecake Johnny” Scruggs received an Emergency Services Award from Fire Chief Eugene A. Jones on May 17, 2010. He and his partner’s actions were recognized by personnel at the catherization lab at the Prince George’s Hospital Center as being “above and beyond the normal call of duty.” After delivering a patient to the Bowie Health Center, Scruggs and his partner, Joe Vigneault, were packing up their equipment and heading back to their unit. Fire Fighter/Medic Scruggs’ attention was drawn to a male who was being brought to the emergency room by family members. He knew instinctively that their services would soon be needed for this patient. Scruggs could see the adult male was in cardiac distress and would most likely need a catherirization—the sooner the better. He immediately conferred with the emergency room physician and remained at the hospital, preparing for an emergency transport to the cath lab at Prince George’s Hospital Center (PGHC) about 15 miles away. The diagnosis was rapidly confirmed; and within minutes the patient was onboard the Paramedic Ambulance with Scruggs and Vigneault, on his way to the cath lab. The Charge Nurse at the PGHC cath lab stated that through the intuitive observation by Scruggs and Vigneault, and their willingness to remain at the Bowie Health Center to facilitate an emergency transport, provided the patient with the best possible chance of survival, both short and long-term. The patient has since made a full recovery from his cardiac episode. 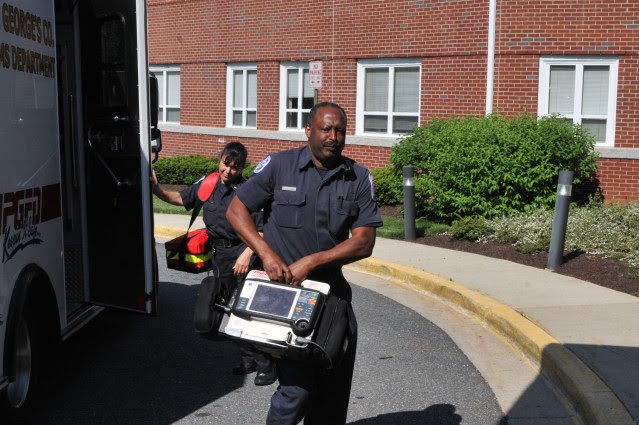 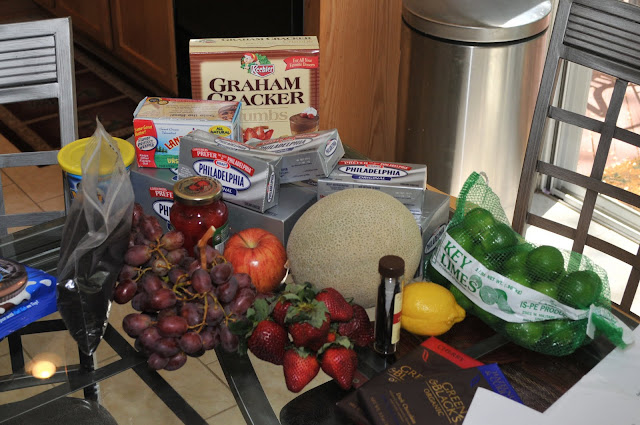 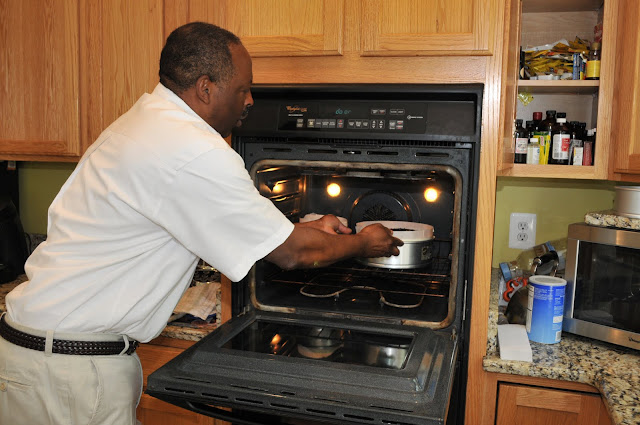 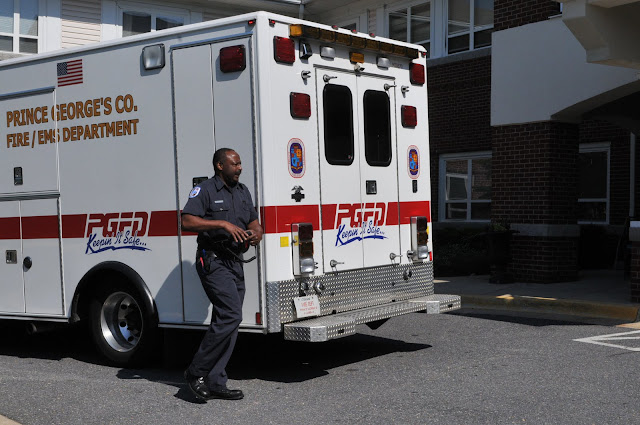 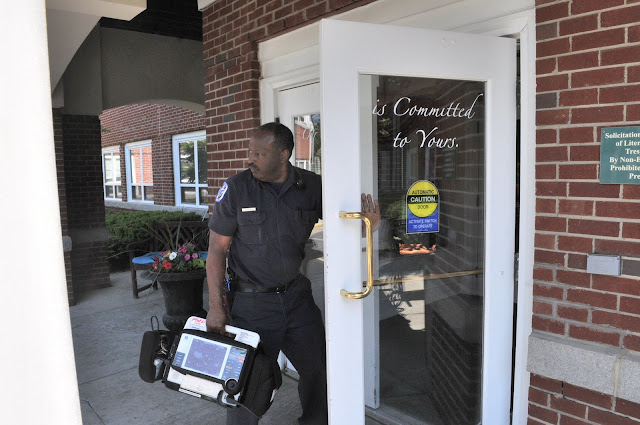 Posted by PGFD at 11:44 AM No comments: Links to this post