MEDIA CONTACT: Mark E. Brady, Chief Spokesperson, 240-508-7930
Sprinkler systems designed for specific occupancies controlled fires in three separate incidents within a 20-hour period in Prince George's County.  The first incident was on Friday, February 3, at about 6:30 pm.  Firefighters were alerted to a fire in a 2-story single family home in Allentown.  Upon arrival firefighters discovered a kitchen fire that was mostly extinguished by the residential sprinklers.  Firefighters completed the extinguishment and confirmed that fire had not spread.  The fire caused an estimated $2500 in fire loss, however, the family was not displaced and no injuries were reported.

Just after 1:00 am, Saturday, February 4, firefighters from the Northview Fire/EMS Station were dispatched to investigate an automatic fire alarm called in by a alarm monitoring company.  Firefighters responded to 16700 Governors Bridge Road in Bowie, a 1-story commercial structure, and found a small fire inside.  The commercial grade sprinkler system had activated and extinguished the majority of the fire.  Firefighters quickly extinguished the remaining fire.  Fire loss was limited to an estimated $5,000 and the cause of the fire was attributed to an electrical cord.  No injuries reported.

A third incident occurred later Saturday afternoon in a sixth floor apartment at 4711 Berwyn House Road in College Park.  It appears that an unattended candle came in contact with combustible materials igniting the fire although the official cause remains under investigation.  The sprinkler system in the apartment activated holding the fire in check until firefighters arrived and completely extinguish the fire.  Fire loss is still being tabulated.  No injuries were reported.
Posted by PGFD at 4:45 PM No comments: Links to this post 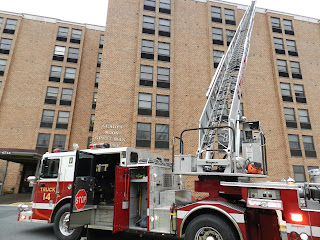 The Spellman House Apartment building at 4711 Berwyn House Road is a 7-story assisted living center designed for senior citizen occupancy. The pair of police officers immediately notified their dispatcher while they made their way to the building and up to the 6th floor. The hallway was starting to fill with smoke as the officers banged on the door trying to alert anybody that might have been inside. Fearing the worst the officers forced their way into the apartment and without hesitation or protective equipment performed a search of the apartment that was filled with smoke and heat. Fortunately no one was inside and the officers made their way back downstairs assisting residents along the way.

Firefighters arrived and advanced hose lines into the apartment of origin. The sprinkler system had already activated and held the spread of the fire and firefighters extinguished the remaining hot spots.
Residents were advised to shelter in place, however, about 50 residents evacuated and were sheltered in the lobby and community room until the all clear was given to return to their apartments at about 3:15.
No injuries occurred. One police officer was evaluated by paramedics for exposure to smoke but did not go to the hospital.

The fire appears to have started accidentally and possibly caused by an unattended candle. Fire Inspectors are also looking into the failure of the alarm system to sound an audible alarm. The only warning provided to residents was a visual blinking alarm.

There were 40 firefighters and paramedics operating on the scene on-board 12 Fire/EMS units. Fire loss estimates are still being tabulated. 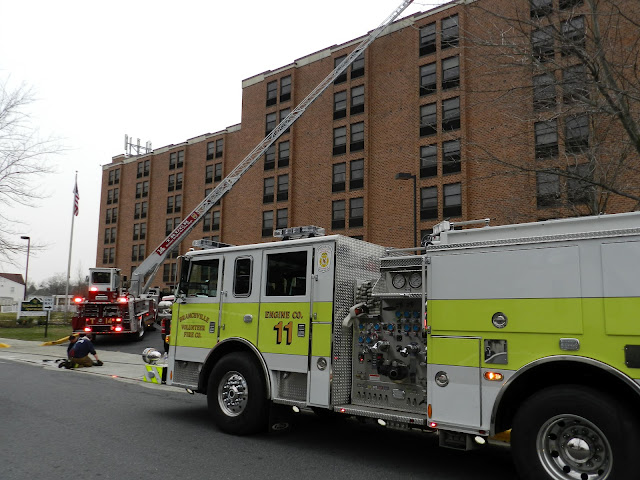 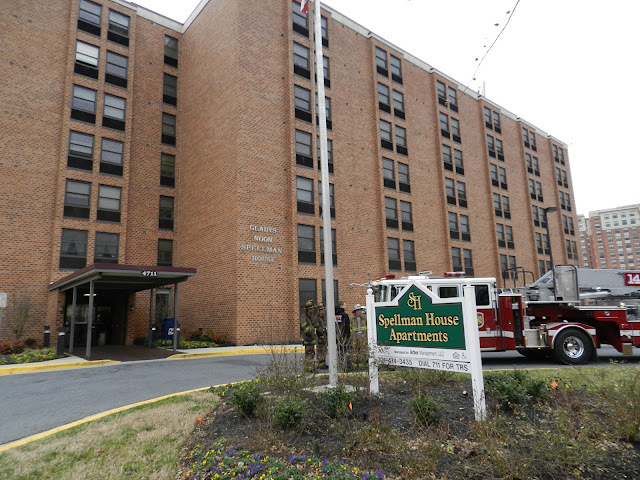