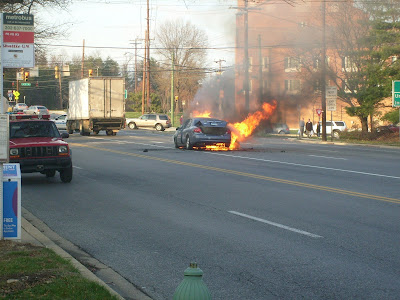 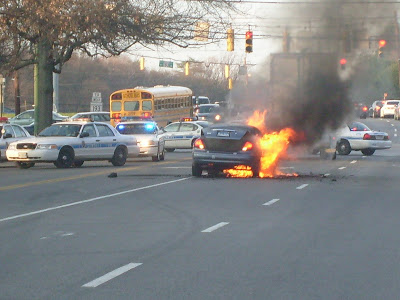 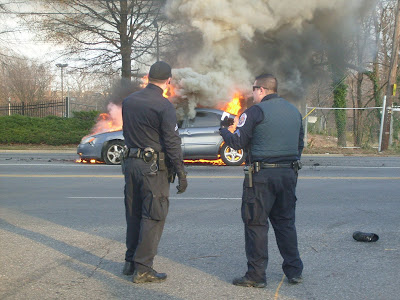 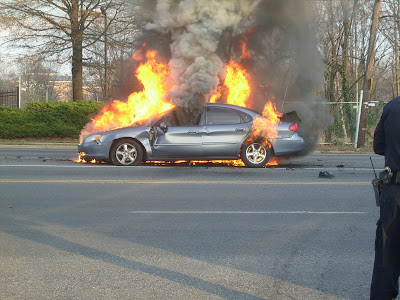 Three Prince George’s County Police Officers are being credited by a fire official with saving an injured crash victim from even more serious and possibly even fatal injuries. Just before 3:30 PM, Monday, December 7, 2009, County Police Officers from the Hyattsville District I – Bureau of Patrol, were dispatched to investigate a possible motor vehicle crash on Adelphi Road at Tulane Drive near the entrance to the University of Maryland. A passenger vehicle with a male occupant driver had rear-ended a truck.


The crash was serious enough that the driver was rendered semi-conscious with his vehicle catching fire. The fire had extended into the passenger area of the vehicle and was about to overwhelm the victim when police arrived. Police officers arrived on the scene and without hesitation or fear of their own safety approached the burning vehicle and pulled the 60ish year-old-male to safety. Within minutes the entire vehicle was fully engulfed with fire.


Firefighters arrived soon after and extinguished the fully involved automobile and paramedics transported the injured male to an area Trauma Center. There were no other injuries reported. Volunteer Battalion Chief Harve Johnston arrived and observed the crash scene and stated, “There is no doubt in my mind that these police officers saved this man from additional, if not, fatal injuries from the fire.”

The police officers are identified as:

Police Officer Eric Southan, ID #2213
Posted by PGFD at 8:49 AM No comments: Links to this post