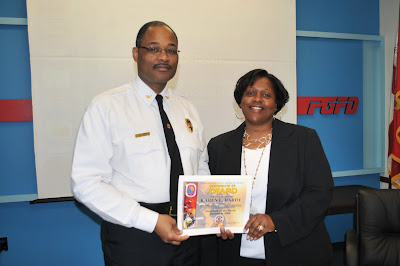 The Prince George’s County Fire/EMS Department was tasked with organizing and conducting the 2009 United Way Campaign for all County Government. This is an enormous effort that involves coordination of all county agencies and United Way Campaign organizers. Each year, the overall coordination of the campaign is rotated throughout all agencies and 2009 was the Fire/EMS Departments turn. Fire Chief Eugene Jones assigned Karen L. Hardy the responsibility to conduct the campaign on behalf of the Department and Prince George’s County. Karen Hardy is a Community Developer III assigned to the Office of Public Information and Community Outreach and has 22 years of County Government work experience. In addition to daily community outreach efforts she is typically assigned to work on projects that involve coordination with internal and external agencies such as the County Fair, Census 2010 and the NBC4 Health and Fitness Expo.

Karen and United Way organizers knew that this would be a challenging year to generate donations. She accepted the challenge and handled issues that could have derailed the campaign but she was able to keep the campaign moving forward. As anticipated, the total donations did not reach the goal, but we were not far from that goal while more funds were donated then were expected and the campaign is considered a huge success.

On Thursday, January 7, 2010, Fire Chief Jones awarded Karen Hardy by designating her as the Fire/EMS Department Employee of the Month. Chief Jones presented Hardy with a certificate which stated:

YOU ARE HEREBY AWARDED THE DESIGNATION AS
THE EMPLOYEE OF THE MONTH
FOR YOUR COMMITMENT TO EXCELLENCE IN THE PERFORMANCE OF YOUR DUTIES WHILE COORDINATING THE COUNTY-WIDE
UNITED WAY CAMPAIGN
Posted by PGFD at 11:13 AM No comments: Links to this post