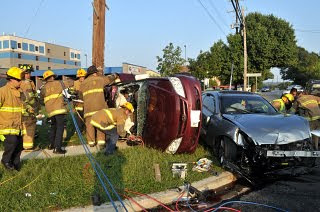 Firefighters and Paramedics from Beltsville, Berwyn Heights and College Park worked at the scene of a 2-vehicle crash involving a female driver trapped within the wreckage of her vehicle.

Just before 5:00 PM, Fire/EMS units from the Beltsville Fire/EMS Station arrived at the intersection of Rhode Island Avenue and Sunnyside Road in Beltsville and encountered the 2-vehicle crash with the driver of each vehicle sustaining injuries. A 20ish year old female was trapped within her vehicle that ended up on its side and the driver of the second vehicle, an approximately 20-year-old male, was found to have sustained less serious injuries. Firefighters from the Berwyn Heights Fire/EMS Station arrived and used their heavy-duty hydraulic tools and cutters to remove the front windshield and vehicle roof to free the trapped female. Once free, paramedics from the College Park Fire/EMS Station quickly assessed her injuries and started to treat the female for possible traumatic injuries. The Maryland State Police Helicopter was summoned to the scene to transport the female patient to a Trauma Center. Her injuries are considered serious and non-life threatening. The adult male was transported by ambulance to an area hospital with minor injuries.

The Prince Georges County Police Department is investigating the crash.
Posted by PGFD at 7:38 PM No comments: Links to this post