As previously announced, Susan Taylor-Proels will retire from the Fire/EMS Department effective October 1, 2015. While a formal process for replacement is being initiated, effective immediately Mary Blocker will begin transitioning with Susan for the Executive Administrative Aide position. During that transition, Mary will continue to assist Deputy Chief Barksdale in the Support Services Command (SSC). Understanding our unfilled civilian complement, we continue to evaluate the most effective method for filling Mary Blocker’s position. Additional information will be forthcoming on the SSC position as it is available.

With reference to the announced retirements of Assistant Chief Mary Crampton and Assistant Fire Chief Dee Drake, the following changes will occur. Effective September 6, 2015, Acting Assistant Fire Chief Brian Frankel will assume the duties as Commander of the Emergency Medical Services office. Effective October 1, 2015, the Watch Office functions will remain with the Emergency Services Command (ESC), under the direction of Acting Battalion Chief Regina Bartholomew. There will be no change in the Watch Office responsibilities. The position currently held by Assistant Fire Chief Drake will be shifted to the Safety office as indicated below.

Along with the existing Duty Chiefs, Volunteer Division Chiefs, Battalion Chiefs, EMS Duty Officers, and staffing officers, the realigned Safety Officer positions will form the Department’s daily Operational Management Team (OMT). As our Department continues to evolve, it will be critical that all of our volunteer and career personnel work collaboratively and collectively with the four shift teams to ensure all functional elements of the Department are operating safely at peak performance and capacity levels. The attached organizational charts reflect the traditional full Department Organization, as well as outlining the expanded ESC OMT.


I encourage everyone to take time now to review the organizational and personnel changes. Please join me in thanking Susan Taylor-Proels, Mary Crampton, and Dee Drake for their combined 70+ years of service to the Prince George’s County Fire/EMS Department. I also congratulate Brian Frankel and Sayshan Conver-White on their appointment as Acting Assistant Fire Chiefs. 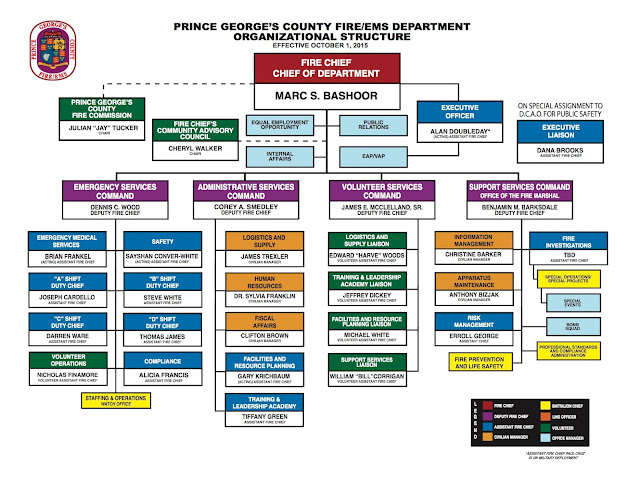 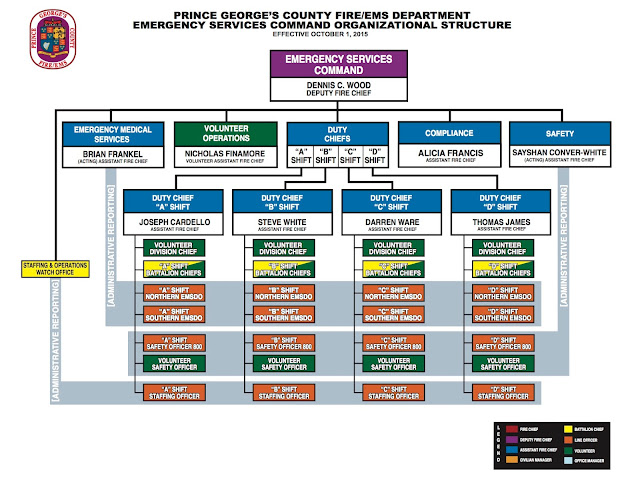 Posted by PGFD at 11:44 AM No comments: Links to this post

"Never Forget" Our County Residents that Perished on 9/11/01

The Prince George’s County Fire/Emergency Medical Services Department has adopted a philosophy of “Never Forget” when it comes to honoring the firefighters that paid the ultimate sacrifice on September 11, 2001 in New York City as well as the residents of Prince George’s County that died in the attack on the Pentagon.  We honor the nearly 3,000 people that died that day.  We will continue to keep them in our thoughts and prayers, “Never Forget.”

Prince George’s County built a Memorial Park to honor our residents that perished on 9-11-01.  The 9/11 Memorial Park, dedicated on September 11, 2006 is located near the entrance of the Bladensburg Waterfront Park and Peace Cross.  The memorial has a brick sidewalk lined with white Crepe Myrtle trees for each of the residents who died in the attacks. There is also a granite memorial with the inscription, ‘‘Prince George’s County honors those who lost their lives on September 11, 2001. We will always remember them.”

* Denotes resident who died on American Flight 77, which crashed into the Pentagon. All other residents were at the Pentagon.  Source: Gazette Newspaper, September 7, 2011 edition.
Posted by PGFD at 10:09 AM No comments: Links to this post