The Morningside Volunteer Firefighter shot while on a call in Temple Hills on Friday night underwent surgery at the Shock Trauma Center in Baltimore.  After a lengthy operation surgeons confirmed Kevin Swain was struck 4 times.  Surgeons completed the operation early this morning.  Swain is expected to survive his injuries.

Volunteer Firefighter Swain, 19 years of age, remains hospitalized in serious but stable condition.  His family is with him as well as many members of the Morningside Volunteer Fire Department and the Baltimore City Fire Department that have provided support to our members since Swain arrived at Shock Trauma.

Two other Morningside Volunteers members sustained injuries immediately after the shootings while seeking cover.  One firefighter sustained a knee injury and another sustained injury to her jaw.  Both members were treated at a local hospital and released early this morning.

Member of the media and public are asked to refrain from contacting the Morningside Volunteer Fire Department as they focus their attention to Kevin, their other injured members and coming to a realization of the incident that unfolded in front of them last night.
Posted by PGFD at 12:06 PM No comments: Links to this post 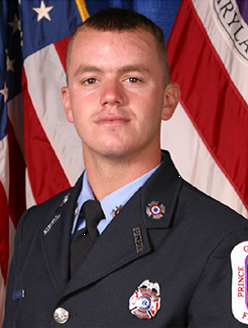 PGFD Suffers a Line of Duty Death and Serious Injury


The Prince George’s County Fire/Emergency Medical Services (EMS) Department is mourning the death of one of our own and praying for the best of a second member.  Firefighter/Medic John E. Ulmschneider was shot and killed while on a call Friday evening.  A Morningside Volunteer Firefighter, Kevin Swain, was shot multiple times and at last check was undergoing surgery.

After arriving on the scene and receiving no answer to knocks on the door and fearing for the occupants welfare a decision was made to force entry into the house to check on the occupant.  As personnel initiated forcible entry several shots were fired from within the house striking Ulmschneider, Swain and a family member that called 911 initially.  The home occupant/shooter quickly surrendered upon orders from the police.

Fire Fighter/Medic Ulmschneider, 37 years of age, was transported in extremely critical condition to Med Star Southern Maryland Hospital Center in Clinton suffering from a gunshot wound to the upper body.  Despite the very best efforts of medics and hospital staff Ulmschneider succumbed to his injuries a short time after arriving at the hospital.  John “Skillet” Ulmschneider lived in St. Mary’s County and was a 13-year member of the Fire/EMS Department.  His normal duty assignment is at Landover Hills Fire/EMS Station 830.  He leaves behind a wife and 2-year-old daughter.

Morningside Volunteer Fire Fighter Kevin Swain, 19 years of age, was flown from the scene by way of Maryland State Trooper 2 to the University of Maryland Shock Trauma Center in Baltimore.  He was in surgery at last check and listed in Serious Condition.  Swain is expected to survive his injuries.

A third person, an adult male civilian, sustained a gunshot wound to his shoulder and transported to a local hospital for treatment.  He was in Fair condition,

The County Police Department continues to investigate the incident.

Prince George’s County Fire Chief Marc S. Bashoor informed the Department of the Line of Duty Death and asked, “Please keep all of our folks and their families in your thoughts and prayers as we work through this difficult time.”

Andrew Pantelis, President of the Prince George’s County Firefighters and Paramedics Association Local 1619, said in a written statement to his members, “This is a day that we have all dreaded in our minds. We are keenly aware of the dangers of our profession but we all have hoped that God would continue to look over and protect us. Now that tragedy has stricken us, we must not fall apart but stand strong and band together to support Skillet's family and those who are closest to him.”

As additional details, including funeral arrangements, become available they will be posted.
Posted by PGFD at 2:42 AM No comments: Links to this post