VFW Firefighter and Paramedic of the Year Recognized

A pair of Prince George’s County Firefighter/Medics were recently were bestowed with awards and distinctions by the Tri-County area Veterans of Foreign War (VFW).  Local VFW’s nominated John A. Bowman and Kacie E. Hayter for their a actions during a childbirth.  The Fire/EMS Department and Prince George’s Hospital Center had previously recognized the pair for Excellence in providing Emergency Medical Care for the same incident.  The VFW Tri-County area consists of Southern Prince George's, Calvert and Charles County.

Fire Chief Marc Bashoor was in attendance at the regional award ceremony held on Sunday, January 5th at the Pax River VFW Post 2632. “I take great pride in seeing our Firefighters and Medics recognized by fraternal organizations such as the Veterans of Foreign Wars  This was a unique incident and one rarely seen performed successfully in our line of work,” said Bashoor.

On Saturday, February 9, 2013, Bowman and Hayter were crewmembers on board the Paramedic Unit from Fire/EMS Station 830, Landover Hills that was dispatched to a home on 58th Place in Cheverly, for a report of a female in labor.  During the patient assessment, the crew observed an umbilical cord presentation without any sign of birth.  The cord presented blue in color, indicating there was no blood getting to the baby from the mother.  If this child was going to survive, it was imperative that something be done quickly.   Paramedic Hayter placed her hand into the birth canal to alleviate pressure on the umbilical cord.  The cord became pink and a pulse was felt indicating the baby was now receiving blood.  Bowman contacted Prince George’s Hospital Center, advising them of the severity of the situation and alerting them to prepare a delivery room.

Immediately upon arriving at the hospital, the patient was assessed and without delay taken to Labor and Delivery.  A physician determined that Hayter must accompany the patient into the Operating Room, where an emergency Cesarean Section would be performed.  Her hand remained in place, keeping pressure off the umbilical cord until the baby was delivered.  After a week in the hospital, the healthy baby girl, delivered at 36 weeks gestation, was discharged into the care of her parents.

Both Bowman and Hayter will now be considered by the VFW at the State and National levels for their respective categories.  They will be up against other nominees from throughout the State of Maryland and the USA.

Posted by PGFD at 5:24 PM No comments: Links to this post

Live "Ice Rescue" training will be conducted on Thursday, January 9, 2014, from 1 pm until 3 pm.  Career and volunteer members of the Prince George's County Fire/EMS Department will be hold a "Ice Rescue" class which includes actual time on ice and in the frigid water.  These members have completed their classroom training and must successfully pass the live training before becoming certified.

On ice and in water training will be held at Bladensburg Waterfront Park at 4601 Bladensburg Road between the hours of 1 pm and 3 pm.  Media is invited to attend.

The Prince George's County Fire/Emergency Medical Services (EMS) Department has embarked upon an "awareness" program, which involves career and volunteer personnel serving as Incident Commanders.  The program is a joint effort with Public Safety Communications (PSC) personnel who are responsible for 911 calls and the dispatch of Fire/EMS units.  PSC falls under a separate agency within County government but has daily interaction on a variety of subjects.

The inter-agency program’s official title is The Other Side of the Radio - PSC Awareness 101.  The nickname of “PSC Sit-Along" has commonly been used in the field to identify the program, as it shadows a traditional practice in the Fire/EMS Department.  This tradition allows non-firefighter/medics to "ride- along” on fire/EMS units, for the purpose of gaining a better perspective of operations.

Assistant Fire Chief Thomas “TJ” James and PSC Shift Supervisor Howard “Chip” Ewing developed the program after discussing mutual frustrations from their personnel about the operations and rationale for why certain tasks are performed in each other’s jobs.  “This program was put together as a measure to bring a better understanding of what PSC does.  We felt that command level officers would gain the most from this awareness program,” stated Ewing.

“Over the years I've noticed there is sometimes a disconnect between the dispatchers, command officers, and crews in the field,” said Assistant Chief James. “Crews in the field have neither an idea of what resources PSC staff has to offer us, nor the expectations from both sides.”

After receiving approval from both the Fire/EMS Department and PSC agency heads, the program was implemented.

After scheduling their Sit-Along, personnel arrive at the large multi-million dollar, state-of-the-art facility in Bowie, Maryland.  During their visit that is expected to be up to 3 hours, the Fire/EMS officer will go to three areas within PSC.  Following a tour of the facility, the officer is provided a headset and sits down with a 911 call-taker to listen to incoming calls.  According to Ewing, “This is so they will have a better understanding of where the information they receive while out in the field comes from.  The hope is the officers will gain a greater sense of how challenging it is at times for PSC to get information from citizens.”

Battalion Chief Michael K. Linynsky, a Sit-Along participant, was impressed with the call-taker’s approach to obtaining information and forwarding it to the appropriate agency (Fire/EMS, Police, Sheriff, other jurisdiction or municipality) for dispatch.  He said, “The calls came in quite rapidly, which was surprising considering it was early afternoon.  The call-taker explained how the calls came in and how they were dispatched.  Prior to even finishing the call, the call-taker had actually sent the information over to dispatch, which was already dispatching units.  I was able to watch in real time units already responding on calls way before the call-taker finished questioning the caller.”
The next area of awareness is at the busiest channel, Talk Group 2, or any alternate talk group incident that happens to come in.  Here, the dispatcher handles the majority radio traffic that includes all EMS incidents and single response fire incidents.  “This should open their eyes to see how many tasks a dispatcher handles while working the radio,” said Ewing.   “When in the field on an incident, the Incident Command Officer has to keep track of 7 to 10 units on most incidents, while the dispatcher has to keep track of ALL the units on ALL incidents.”  Battalion Chief Linynsky, amazed at the manner in which Dispatcher Cherry handled herself, stated, “There is actually very little downtime on this channel, as everything from sprained ankles to automatic fire alarms are handled here.  The dispatcher was constantly working and actually needed a foot pedal to key up the radio, as she was constantly typing or using the phone for callbacks.”

The last stop on the three-hour tour is with the Shift Supervisor, who explains how calls are dispatched; how transfers are made; how the radio systems works; and, what resources are available to the officer while on an incident.  The supervisor will also talk about the “15 minute PAR check sheet.”  This check sheet is a tool provided to the officer to help him/her know what information is expected from them during a working incident.  Finally, a detailed account is given on the working of the CAD and how it can be used as a tool to help the officer in several different ways.

Sit-Along participant Linynsky was fortunate enough to sit and listen to a building fire dispatch that consisted of 4 engines, 2 ladder trucks, a heavy duty rescue squad, an ambulance, and 2 battalion chiefs.  The call involved a 911 report of smoke in the basement of an apartment building.  “With the new status buttons on our radios,” he said, “I was amazed at how silent the radios have become.  The firefighter doesn't notice the silence as they are thinking about their game plan and the sirens are going.  Each assignment I listened to was over relatively quickly, as there was nothing found.”

Overall, the awareness program has been successful in achieving the goals as set forth.  Dave Beck, Assistant Operations Manager for Fire/EMS and Police Dispatch Centers, stated, “Chief James and EDIV Ewing have done a terrific job with this program.  The program allows the battalion chiefs to see the call from start to finish.  They see how, by the call-takers asking pertinent questions, the EMD and EFD protocols help them in the field.”  He further described the program, saying, “When participants sit with the dispatcher, they get a better understanding of why the dispatcher is asking certain questions.  Sitting with the dispatch supervisor enables them to see how units are selected through the CAD system for certain calls.  They also understand if staffing is not reported correctly, it may lead to not sending the closest units to the call.  Lastly, PSC goes over how to use the basic functions of CAD, so the battalion chief can use it as an investigation tool to look up calls for service by station, call types, units, etc.”  Operations Manger Beck concluded by saying, “At the end of the day, we are all here for same reason, which is to assist Prince George’s County citizens the best that we can. The battalion chief Sit-Along Program makes both agencies better off.”

PSC Shift Supervisor Ewing summarized the program saying, “So far, the majority of officers who have attended The Other Side of the Radio awareness program have come away with a better understanding of what PSC does and how it all works.  They have nothing but positive feedback for this program.”

“By simply sitting with PSC staff while they are doing their job—seeing what they go through—would help with understanding what the front side of our emergency response system goes through day in and day out, said Assistant Fire Chief James.  “I hope that after seeing and experiencing how and what the PSC staff/dispatchers go through, the disconnect between the two parties that mitigate some very serious incidents will be minimized, thereby enabling them to perform the task as a team.  I walked away with a new appreciation for the work our call-takers and dispatchers do.  Will I operate differently in the field after this program?  Yes!  Without a doubt, awareness is an amazing thing!”

The Other Side of the Radio - PSC Awareness 101 program is open to all career and volunteer command staff at the rank of battalion chief and above.  To participate in the program, Fire/EMS personnel should contact Assistant Fire Chief Thomas James. 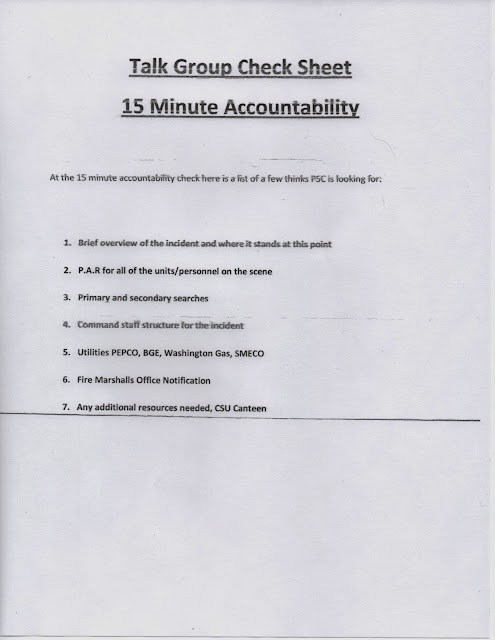