An early morning train ride to work turned into a text book example of the “Chain of Survival.”  An in-bound MARC commuter train was approaching the Beltsville stop in the 7000 block of Murkirk Road around 8:00 am.  The conductor was notified that an adult male passenger had fallen to the floor apparently from a heart attack in one of the cars.  Fellow commuters rushed to the man’s aid and initiated cardio-pulmonary resuscitation (CPR) while others notified 911 and the conductor rushed to the train car with an Automatic External Defibrillator (AED).   The AED was applied and shocked the unconscious man that was in cardiac arrest.

Firefighter/Medics from Beltsville Fire/EMS Station 831 and Calverton Fire/EMS Station 841 were the first units to arrive and continued CPR and prepared the man for transport.  A paramedic unit from Burtonsville, Montgomery County Station 715, was next to arrive and continued pre-hospital care while transporting to a medical facility.  By the time the medics reached the hospital the patient had regained spontaneous circulation.

The Montgomery County Medics had transmitted the patient’s ECG to the receiving facility during transport, allowing the medics and the hospital staff to see that a cardiac catherization would be required.  Within minutes of arrival at the hospital the patient, with a pulse, was on the way to a cath lab, which provided the patient the best possible chance for a positive outcome.

Most emergency medical services professionals know that the Chain of Survival is critical in saving victims of sudden cardiac arrest.  This chain includes immediate notification to 911, by-stander CPR, early defibrillation, advanced life support care and transportation to a medical facility capable of providing acute services is key to surviving sudden cardiac arrest.  This patient was afforded all of these key services.

Thank you to the citizens that made fast notification to 911,without hesitation went to help a stranger and perform CPR, for MARC trains for carrying an AED, for the rapid response and professional care provided by Prince George’s, Montgomery County Firefighters/Medics and hospital emergency department staff.  Finally, to the technology that allows hospitals to receive vital information from medics in the field allowing staff to make timely arrangements for intensive medical care.

Todays collective actions by all involved provided this man with the best opportunity to survive.
Posted by PGFD at 5:08 PM 1 comment: Links to this post

Prince George’s County Fire Chief Marc S. Bashoor, Deputy Fire Chief Jim McClelland, Assistant Fire Chief Alan Doubleday and Chuck Walker, President of the Volunteer Fire and Rescue Association were on hand  to help recognize the deserving members at a ceremony at the Kentland Fire Station in Landover.  Kentland Volunteer Chief Tony Kelleher and numerous members were in attendance in support of their fellow members.  The award recognized members for their ingenuity and bravery in rescuing a family of three from a burning apartment building. 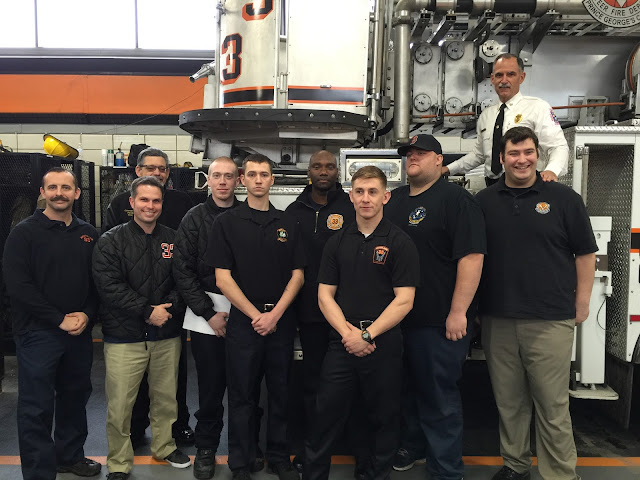 Deserving members were presented with Emergency Services Awards and an accompanying letter:

In the early morning hours of Thursday, August 27, 2015, units from the Prince George’s County Fire/EMS Department responded for an apartment building fire in the 4400 block of 68th Place in Landover Hills, with reports of people trapped.  Firefighters arrived on the scene to find a 3-story (front) and 4-story (rear) garden-style apartment building with fire showing from within the interior stairwell and extension to the roof.

The first arriving crew from Landover Hills Fire/EMS Station 830 advanced hose lines to extinguish the fire and perform an interior search for trapped occupants.  Additional firefighters, including members of the Kentland Volunteer Fire Department, Inc., arrived and took a position at the rear of the 4-story building.  They observed a family of three on a top floor balcony adjacent the apartment of origin.  The family’s only means of egress was through the stairwell, which was obstructed by fire and smoke.  The apparatus carrying ladders tall enough to reach the victims had not yet arrived, and the ones on the scene were inadequate to access the balcony at the rear of the building.  Firefighters were forced to use a combination of two ladders, a 28-footer to reach the third floor and a 14-foot roof ladder that was hung vertically from the fourth floor balcony.  They ascended the 14-foot ladder, “pompier” style to access the trapped occupants and ensure their rescue.  As one victim was being assisted down the ladders, firefighters provided their air masks to those awaiting rescue.  Each of the occupants was safely removed and placed in the care of EMS personnel for evaluation.

Your performance, as well as the teamwork and ingenuity demonstrated on the scene of this incident, saved three lives and is commendable and worthy of recommendation.  Therefore, you are hereby awarded a Fire/EMS Department Emergency Services Award.  Your actions reflect well on you both personally and professionally, the Kentland Volunteer Fire Department, Inc., and exemplify the excellent caliber of service we strive to provide to the residents of Prince George’s County.

Fire Chief Bashoor also presented Emergency Services Award to deserving personnel for their actions in rescuing a female from her burning townhouse.  In addition to a Certificate of Award an accompanying letter read: 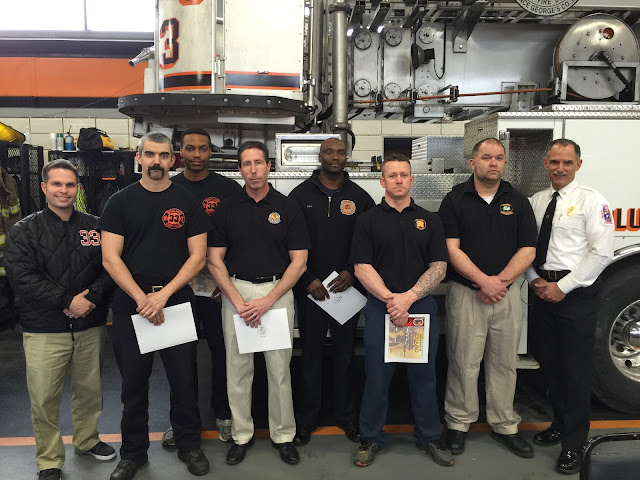 Just past midnight on Sunday, October 18, 2015, you were a member of the crews on board units from the Kentland Volunteer Fire Department, Inc., which were dispatched to the 10000 block of Campus Way South for a reported house fire with entrapment.  You arrived to find a 2-story townhouse with heavy fire showing from the second floor.  Engine 833 quickly advanced an attack line to the second floor and began knocking down the fire.  Hearing sounds that possibly could have been coming from a victim, Tower 833 began aggressively searching of a second floor bedroom.  The search was extremely difficult, due to the configuration of the bedroom and a large amount of personal belongings gathered there.  Nevertheless, the crews persevered and were able to locate the victim and remove her from the burning home.  Once outside, she was transferred into the care of awaiting EMS personnel and transported to the nearest hospital.

It was later learned that the patient’s nose hairs were singed and there was soot in her mouth.  Had it not been for the quick thinking and immediate response of you and your fellow crew members, the outcome of this emergency might have been far more tragic.  Your performance on the scene of this incident is directly responsible for saving the female victim’s life.  Therefore, it is my pleasure to present to you a Fire/EMS Department Emergency Services Award.  Your actions reflect well on you both personally and professionally, the Kentland Volunteer Fire Department, Inc., and exemplify the excellent caliber of service we strive to provide to the residents of Prince George’s County.


Posted by PGFD at 4:42 PM No comments: Links to this post